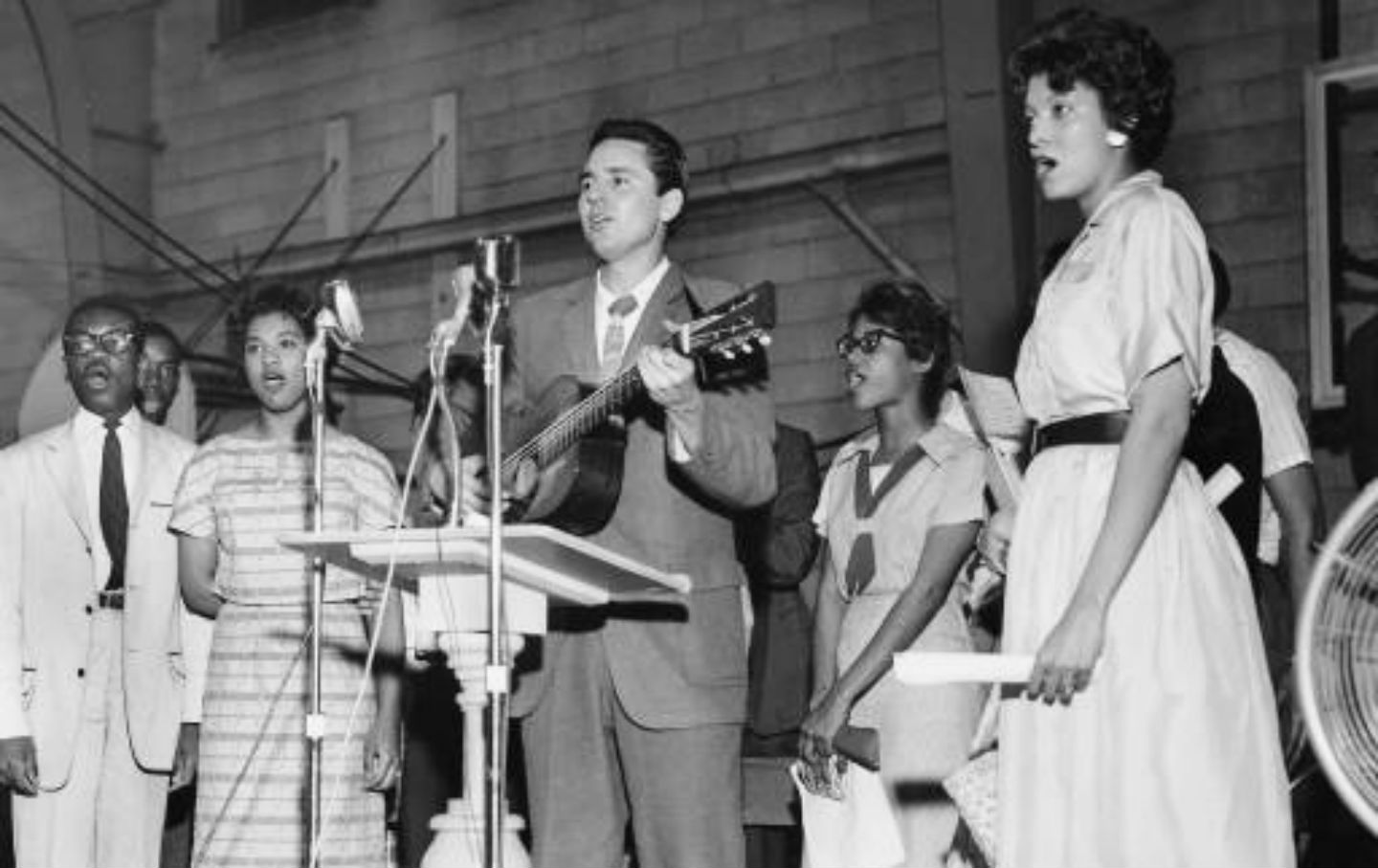 Guy Carawan, who introduced the song “We Shall Overcome” to the civil rights movement, died on May 4 at age eighty-seven after a lengthy illness.

Millions of people around the world have sung the words to ‘We Shall Overcome,” but few of them know the name Guy Carawan. Possessed with prodigious talent and a deep passion for justice, Carawan was modest and self-effacing, and little-known outside of a small circle of social activists and folklore enthusiasts. Of course, that’s part of the folk tradition. Carawan didn’t write “We Shall Overcome,” but he transformed it, turning it into an international anthem for human rights.

I had long been a fan of Carawan, who for over fifty years worked as the music director for the Highlander Research and Education Center in rural Tennessee, an interracial training center for grassroots activists, including Rev. Martin Luther King, Rosa Parks, Fannie Lou Hamer, and John Lewis—but until 2000 I didn’t know he had attended Occidental College, where I teach, when I read an article about him in Sing Out, the folk song magazine.

I called his home in New Market, Tennessee near the Highlander Center, and asked him and his wife Candie if they’d be interested in doing a concert at his alma mater. Although the Carawans, both originally from Southern California, had occasionally traveled to the area to visit family members, Guy hadn’t been back to the campus since he graduated, with a degree in mathematics, in 1949. He was grateful for the invitation. It took several years to orchestrate the visit, but in March 2003, Guy and Candie arrived on campus. In the meantime, I had persuaded the college president and trustees to give Guy an honorary degree for his lifetime commitment to social justice and his immense contributions to music and folklore.

The Carawans spent two days on campus. They gave workshops in several classes and performed a concert in the college chapel. Before the concert, Guy had a reunion with a dozen of his former ATO fraternity brothers, none of whom he’d seen since his graduation fifty-four years earlier. Carawan’s first experience singing in public was with an ATO quartet. He played the ukulele and the group sang tunes like “Ain’t She Sweet.”

It was pouring heavily that night but by the time the Carawans entered the chapel it was standing-room-only, filled with college students, local activists, and many friends that Guy had made in LA’s folk music scene in the 1950s. One of them was Beth Lomax Hawes, an original member of the Almanac Singers with Pete Seeger and Woody Guthrie. Guy and Candy were joined on stage by their son Evan, an accomplished hammer dulcimer player, and by Simeon Pillich, a world-renowned bass player who teaches at the college. In between sets, Occidental president Ted Mitchell (now deputy secretary of the US Department of Education) bestowed Carawan with his honorary degree. Guy was proud of the honor but somewhat embarrassed by the ceremony—especially when Mitchell placed Occidental black-and-orange hood around his neck—but he kept it on during the second set.

During his visit to Occidental, Guy recalled his personal, political, and music journey.

Born in Los Angeles in 1927 to parents with Southern roots, Carawan was drawn to folk music after taking a folklore course at Occidental. His interest grew when his mother gave him copies of Carl Sandburg’s The New American Songbag, and musicologist Alan Lomax’s Folksongs: USA. He listened to records by Woody Guthrie, Pete Seeger and Burl Ives. By the time Carawan arrived at UCLA—where he earned a master’s degree in sociology—his curiosity about society and culture had grown considerably.

In 1953, Carawan joined folk singers Ramblin’ Jack Elliott and Frank Hamilton and struck out on the road, performing as the Dusty Road Boys. They stopped for a few weeks at Highlander (then in Monteagle, Tenn.), where Carawan got his first exposure to the burgeoning civil rights movement and the importance of songs to the struggle.

The folk music boom was just beginning, and Guy hoped to make a living playing music. In 1958, he played the opening night of LA’s legendary folk club the Ash Grove. Later that year, he embarked on a world tour, where he caught the attention of the flourishing British folk scene. In England, he recorded “America at Play” with Peggy Seeger, an album largely composed of songs collected by Alan and John Lomax and Cecil Sharp. Carawan played guitar, banjo and hammer dulcimer. When he returned to the US, he traveled to Highlander to volunteer his services, and soon became its music director.

The civil rights movement was underway and Highlander was at the center of it. Founded in 1932 by Myles Horton, an educator and minister who believed in the “social gospel,” Highlander sponsored interracial workshops for labor and civil rights activists. Southern segregationists branded Highlander as a “communist” operation and tried several times to shut it down.

During his visit to Occidental, Carawan spoke to students and recalled his connection to the song “We Shall Overcome.”

The tune’s origins go back to a refrain that slaves would sing to sustain themselves: “I’ll be all right someday.” Southern Black churches adopted the song and by 1901 a Methodist minister, Charles Tindley, published a version titled, “I’ll Overcome Someday.” In 1945, Black members of the Food, Tobacco, and Agricultural Workers Union from Charleston, South Carolina revised the song as part of their struggle and sang it on their picket lines. They sang: “We will overcome, and we will win our rights someday.”

Two years later, several of the union’s activists brought the song to Highlander, Zilphia Horton, Myles’ wife and then Highlander’s music director, learned the song from the tobacco workers and included it in all of her workshops. In 1947, she taught it to folksinger Peter Seeger, who was a frequent visitor to Highlander. Seeger made a few changes to the tune, including turning “We Will Overcome” to “We Shall Overcome.

It was at Highlander that Carawan first heard Seeger’s version of the famous song. Carawan made his own changes to the tune. He showed Occidental’s students how he had fastened the tempo and revised some words, making it easier to sing in large groups.

“They were singing it like this,” he explained, singing the gospel song without his guitar and lacking a beat. “I thought it was a touching song, but at a certain point I began to add these chords.”

Carawan started strumming his guitar, then began singing in a firm voice that belied his age. Students recognized the familiar song and started singing along. Then Candie, singing harmony, joined in. After a few stanzas, Carawan paused and told a story.

“One night at Highlander, the police came in and ransacked everybody’s luggage, trying to scare people off, and a young teenage girl from Montgomery started singing, ‘We are not afraid,’ and that became part of the song.”

The Southern sit-ins, led by college students, had begun in Greensboro, North Carolina in February 1960. During a weekend workshop at Highlander, Carawan taught his new version of “We Shall Overcome” to leaders of the Nashville sit-in. A few weeks later, he taught the song to more than 300 activists at the historic founding meeting of the Student Nonviolent Coordinating Committee (SNCC) at Shaw University in Raleigh, NC. They were preparing to launch sit-in demonstrations throughout the South, and they spread the song that became the anthem of the civil rights movement.

Believing that singing and music could be a unifying force, he also taught the SNCC activists many other Southern gospel and religious songs, changing a word here and there to adapt it to their cause. These include “Follow the Drinking Gourd,” “Keep Your Eyes on the Prize, Hold On” and “I’m Going to Sit at the Welcome Table.”

A few weeks later, civil rights leader Rev. C.T. Vivian invited Guy to “bring your guitar” to a demonstration protesting the bombing of the home of prominent black Nashville lawyer, Z. Alexander Looby. Four thousand demonstrators marched to Nashville’s City Hall. Carawan led the singing of “We Shall Overcome,” including the new verse, “We are not alone.”

While based at Highlander, Guy pursued a career as a folklorist, a teacher, and a live performer at nightclubs, college campuses, and public rallies for social change. But his ties to Highlander and the freedom movement, his marriage to Candie (whom he met during a civil rights protest in 1960 when she was a Pomona College student spending a year as an exchange student at Fisk University in Nashville), and their growing family—kept him in the South. The Carawans spent several years on the South Carolina Sea Islands, where they helped civil rights icon Septima Clark teach songs to the islands’ rich Gullah culture.

They began recording and documenting the local culture, and persuaded Folkways Records founder Moses Asch to release a couple of albums highlighting Gullah shouts and spirituals

In the 1970s, the Carawans immersed themselves in the Black Lung movement, the anti-strip-mine movement, and other regional issues, facilitating workshops for activists, teaching them songs to energize the movement, and documenting, through books and records, the culture of Appalachia and the civil rights movement.

Guy’s records include “Tree of Life”; “Sing for Freedom”; “The Nashville Sit-in Story”; “We Shall Overcome: Southern Freedom Songs”; “Freedom in the Air: Albany, Georgia”; “The Story of Greenwood, Mississippi”; “Birmingham, Alabama, Mass Meeting”; “Been in the Storm So Long”; “Moving Star Hall Singers: Folk Festival on Johns Island”; “Come All You Coal Miners”; and “They’ll Never Keep Us Down.” He recorded a children’s album, “My Rhinoceros & Other Friends.” They also produced an album of field recordings, “Been In the Storm So Long: A Collection of Spirituals, Folk Tales and Children’s Games from John’s Island, South Carolina.”

The Carawans’ books on the civil rights movement include Sing for Freedom: The Story of the Civil Rights Movement Through Its Songs; Freedom Is a Constant Struggle; and We Shall Overcome: Songs of the Southern Freedom Movement. They also wrote Voices from the Mountains: The People of Appalachia and Ain’t You Got a Right to the Tree of Life?: The People of Johns Island, South Carolina—Their Faces, Their Words and Their Songs.

A documentary film by the Carawans’ daughter, Heather, “The Telling Takes Me Home,” recounts her growing up at Highlander in a family and community of activists.