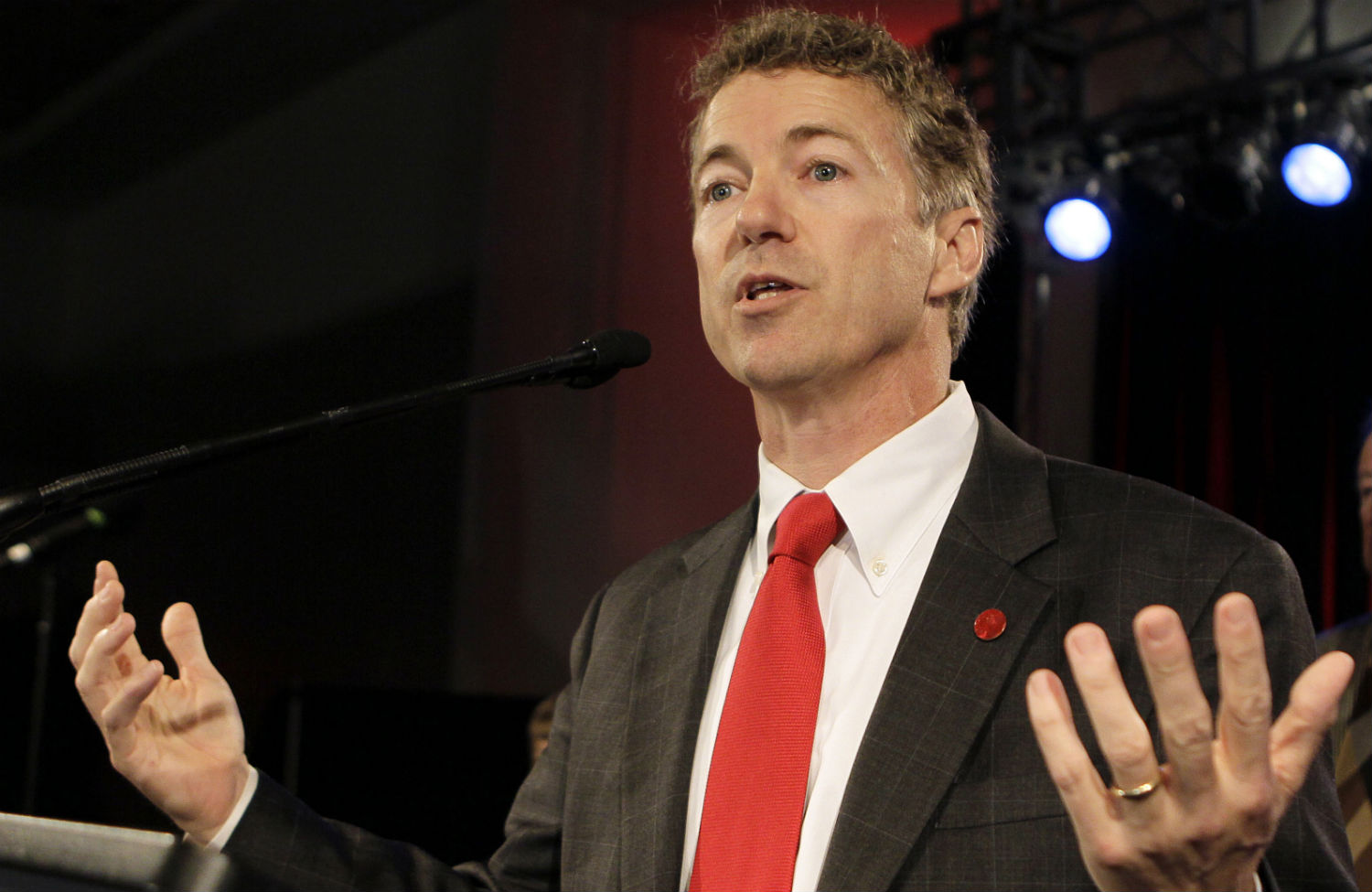 Rand Paul may not fully recognize it, but he has outlined an important challenge to the selective outrage of his fellow Republicans when it comes to executive actions by American presidents.

In moving to force Congress to formally decide whether to declare war on the Islamic State militants that the United States is already fighting, the senator from Kentucky is highlighting the failure of Republican congressional leaders (or, for the most part, their Democratic counterparts) to take seriously what should always be the most concerning example of executive overreach. This is the executive action that troubled the founders above all others: warmaking by presidents in the absence of a declaration of war by the Congress.

“Conservatives are mad at (Obama) about immigration. And they’re mad about him using executive authority on Obamacare,” says Paul. “But this is another example where he doesn’t have much respect for Congress, and some conservatives don’t quite get that.”

Paul should acknowledge that warmaking without the authorization of Congress is not “another example” of executive authority being extended into troubling territory. It is, by far, the most significant example.

Paul should also acknowledge that the disrespect shown by presidents for Congress with regard to declarations of war did not begin with Obama. It extends back decades and has been evidenced by Republican and Democratic presidents.

Paul’s proposal to have Congress declare that “a state of war exists between the organization identifying itself as the Islamic State and the government and the people of the United States” is flawed on many levels. For instance, despite the senator’s protestations to the contrary, it opens too much space for the assignment of ground troops to a fight in a region where most Americans are exceptionally disinclined to engage in another full-scale war.

Yet what Paul is doing is important, in that he is challenging the “parlor game” wherein leaders of Congress “consult” with presidents and then allow them to wage war with anything akin to the congressional oversight required by the Constitution.

This “parlor game” has been going on for a long time. The United States has not formally declared war since World War II. And many of the same Republicans who are now screaming about the president issuing an executive order with regard to immigration—as Republican Presidents Eisenhower, Nixon, Ford, Reagan and Bush did before him—have engaged in the war-and-peace parlor game quite willingly. Indeed, interventionist Republicans such as Arizona Senator John McCain and South Carolina Senator Lindsey Graham are frequently heard urging presidents to be more aggressive and unilaterally inclined in their executive warmaking.

The war hawks have been aided and abetted by Republican congressional leaders—along with Democrats—who have declined to take even the most minimal steps to check and balance presidential warmaking since the days when George W. Bush began overreaching.

When President Obama began ramping up the current fight with Islamic State militants in September, a CNN poll found that, while Americans were “alarmed” and “concerned” about reports of conflict in Iraq and Syria, they were also skeptical about getting too deeply engaged in that conflict. Specifically the poll found that:

1. Americans want limits placed on the US military response to the Islamic State in Iraq and the Levant and to the broader political challenges that have developed in those countries. For instance, a majority of Americans, 61 percent of Americans oppose placing US troops on the ground in Iraq and Syria.

2. More than 70 percent of Americans believe that President Obama should seek congressional authorization for military strikes against ISIL.

Amid all the examples of “alarm” and “concern,” the American people remain wary about any rush to war. They believe that Congress—not just the president—should have a say with regard to expansion of military action. And, make no mistake, what President Obama has embarked upon involves a dramatic expansion of US military involvement and action in Iraq and Syria.

As Congresswoman Barbara Lee, D-California, said in a statement in September, “The facts are clear. We are no longer talking about limited strikes to prevent genocide and protect US personnel. We are talking about sustained bombing and the use of military force.”

The US troop presence in the region has risen steadily since September. Yet even now, House Speaker John Boehner, who so noisily objects to executive initiatives on the domestic front, remains cautious about challenging executive warmaking.

As such Obama simply says, “I have the authority to address the threat from ISIL. But I believe we are strongest as a nation when the President and Congress work together. So I welcome congressional support for this effort in order to show the world that Americans are united in confronting this danger.”

Translation: While the president is happy to accept endorsements of his actions—and may, in fact, get from this Congress or the next—he is in no rush to seek the congressional advice and consent on matters of war and peace that is imagined and intended by the Constitution.

Yet, Congress has been absurdly slow in asserting its clear authority as a co-equal branch of government to debate and vote on plans for war and, through the power of the purse, to define the scope and character of warmaking.

While Republican and Democratic leaders have been derelict in their duty, there are members of the House and Senate who continue to voice concerns about the lack of clear congressional authorization for military action in Iraq and Syria.

Congresswoman Lee has long championed the view that “the Constitution requires Congress to vote on the use of military force. This is not about this President. This is about any President and any Congress. We must re-establish the checks and balances laid out by the Constitution.”

She’s right. And she has allies.

Congressional Progressive Caucus co-chairs Raul Grijalva, D-Arizona, and Keith Ellison, D-Minnesota, have joined Lee in asking for immediate and genuine debate. “The voices of the American people must be heard during a full and robust debate in Congress on the use of military force,” they have said. “Speaker Boehner should put legislation authorizing military action on the floor of the House of Representatives before Congress leaves for the upcoming district work period.”

House Armed Services Committee member John Garamendi, D-California, has for months been specific in arguing that “the U.S. Constitution and War Powers Resolution are clear: Congress is obligated to weigh in on extended U.S. military actions. No matter how noble the cause, no matter how just the engagement, Congress’ voice and vote are required within a 60-90 day window.”

The sixty-to-ninety-day window that Garamendi spoke of in that September statement has passed. For months, Speaker Boehner and other congressional leaders have ignored what the California congressman correctly describes as “our Constitutionally-required duty.”

Now, it appears that Congress may finally send a signal regarding its sentiments. But, as The New York Times notes:

Some (Republican) conservatives may balk at setting up a narrow set of parameters for the president. Senator James M. Inhofe of Oklahoma, the senior Republican on the Armed Services Committee, has introduced a resolution that would give the president “all necessary and appropriate force” to defend the country against the Islamic State but would require him to report back to Congress on the effort every 90 days.

The debate will probably continue into the next Congress. Republicans will then control both chambers, which is likely to make it more difficult to pass a resolution that sets major limits.

Congress has ceded to successive presidents immense authority to act on domestic and foreign-policy concerns. This has created a confusing circumstance that favors the executive. The White House has broad authority to act when emergencies arise, and when crises go unaddressed by obstructionist or dysfunctional congresses.

In many areas of domestic policy, the courts and Congress have helped to define for presidents a good deal of flexibility. Yet when it comes to matters of war and peace, there has been little in the war of responsible defintion. Instead, the power of presidents has expanded to a point where Congress now tends to be a spectator—rather than separate-but-equal branch of government.

This is an imbalance that the founders feared, as it opens up the prospect of perpetual war, which James Madison well and wisely recognized. “Of all the enemies to public liberty, war is, perhaps, the most to be dreaded, because it comprises and develops the germ of every other,” Madison, the essential author of the US Constitution, warned more than two centuries ago. “War is the parent of armies; from these proceed debts and taxes; and armies, and debts, and taxes are the known instruments for bringing the many under the domination of the few. In war, too, the discretionary power of the Executive is extended; its influence in dealing out offices, honors, and emoluments is multiplied; and all the means of seducing the minds are added to those of subduing the force of the people. The same malignant aspect in republicanism may be traced in the inequality of fortunes and the opportunities of fraud growing out of a state of war, and in the degeneracy of manners and of morals engendered by both. No nation could reserve its freedom in the midst of continual warfare.”