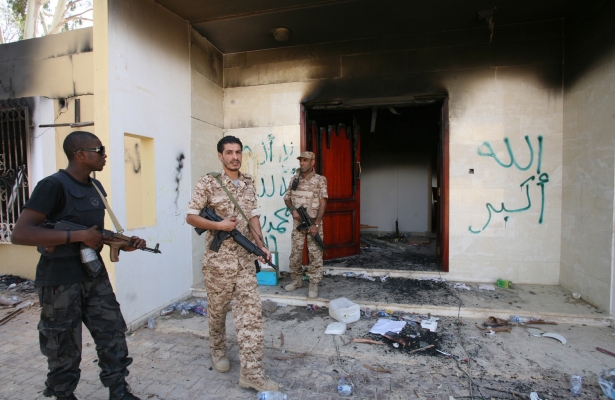 The burnt-out buildings of the US consulate in Benghazi, Libya. (AP/Mohammad Hannon)

The illogic of the GOP’s obsession with Benghazi—and with Hillary Clinton’s role in the tragedy—has been documented ad nauseam, and suffice to say that five investigations, fifty briefings and 25,000 pages of documents have found absolutely no intentional wrongdoing by anyone in the Obama administration, including former Secretary Clinton. In fact, the only involvement Clinton had with Benghazi took place before the attack, when she strongly objected to the Republican Congress’s cutting of the diplomatic security budget. Over her objections, they cut it by $500 million anyway, which left our people overseas needlessly exposed. That’s cause and effect, with Issa and Co.—and not Secretary Clinton—playing the role of cause. Afterward, Clinton implemented every single recommendation made by the bipartisan Pickering Commission, which investigated the attack.

Strunk and White teach writers to use a thesaurus sparingly, if at all, but I’m afraid I have to agree with Michael Tomasky, who at The Daily Beast calls the latest Benghazi inquest “bullsh*t,” as well as “absurd, insane, sickening, repulsive, shameful, and at the same time shame-less.”

Republicans, never ones for examining historical context, seem to have forgotten the lapses in military leadership under sainted President Reagan that led directly to the 1983 barracks bombing in Beirut. Among other failings, the report of the Long Commission, which investigated the attack, determined that the United States failed “to take the security measures necessary to preclude the catastrophic loss of life.” Following the tragedy, Reagan accepted responsibility and in February 1984 began pulling Marines out of Lebanon; nine months later, he carried forty-nine states on his way to re-election. Responsibility? Withdrawal? Today’s GOP would surely have blasted Reagan during the primaries for going “soft on terror.”

But the real Benghazi scandal is the one that Republicans and Democrats don’t want to examine, the trillion-dollar question at the heart of the matter. This is an opportunity to look squarely at our stance on national security, to assess whether we’re even in the ballpark of best serving American security interests abroad (and at home). Nation Contributing Editor Robert Scheer, for example, has called Benghazi a “monster of our own creation,” noting that “as with [9/11], the perps turned out to be people the US secret agencies had once trusted. The enemy here was not Al Qaeda, but rather a homegrown menace empowered by foreign intervention.”

Time and time again, Scheer explains, we insert ourselves into international conflicts, secretly arm and empower a faction we deem to be “freedom fighters,” then suffer the consequences when those we’ve pushed to achieve self-determination do indeed get there. Meanwhile, because our intelligence agencies eschew any semblance of transparency, we have no informed debate on whether any of this was a good idea in the first place. And the cycle, free from oversight, repeats itself, with American citizens even less safe and even more in the dark.

We need to put our Manichaean “soft on terror/tough on terror” mindset behind us and instead seek to become smart on terror. And this cannot be achieved via the secret dealings of special operations forces deployed in the newly proposed global Counterterrorism Partnerships Fund or the CIA and NSA.

President Obama seems to get it, at least on an intellectual level: “When we cannot explain our [counterterrorism] efforts clearly and publicly, we face terrorist propaganda and international suspicion,” he told the graduating cadets at West Point on Wednesday, “…we erode legitimacy with our partners and our people, and we reduce accountability in our own government.” Nevertheless, such rhetoric hasn’t stopped him from expanding secretive counterterrorism operations with Special Forces into four African states. Historian Nick Turse tells The Nation’s Zoë Carpenter that the US Africa Command is busy converting itself from “a more congenial combatant command to an actual war-fighting combatant command.”

We might ask ourselves—instead of taking it on reflexive faith, as we’ve been doing for the last thirteen years—whether or not the “war on terror” is actually doing any good. Absolutely not, The Independent’s Patrick Cockburn has determined. “The ‘war on terror’ has failed,” he writes, explaining a corollary to Scheer’s point, “because it did not target the jihadi movement as a whole and, above all, was not aimed at Saudi Arabia and Pakistan, the two countries that had fostered jihadism as a creed and a movement. The US did not do so because they were important American allies whom it did not want to offend.”

Instead, we’ve decided to offend our own citizenry through needless snooping, civil rights violations and invasions of privacy.

At TomDispatch, Tom Engelhardt observes, incredulously, that the United States “seems incapable of intervening in a meaningful way just about anywhere on Earth despite the fact that its military remains unchallenged on a global level. It’s little short of mind-blowing.” While more time and more money are wasted on another attempt to find the meaning of Benghazi, we’re squandering the opportunity to find the meaning of our own behavior and our own policies. Why can’t we intervene in a meaningful way? Why have opacity and subterfuge replaced transparency and open debate?

That it’s not crystal clear to congressional Republicans that we’re doing something wrong with our foreign policy is a significant sign of incompetence. We’ve already answered (and re-answered) the question of who failed whom in Benghazi; it’s instead time to start asking why, more than a decade after 9/11, we put ourselves in a position to fail in the first place.