On Thursday, newly elected Congresswoman Rashida Tlaib of Michigan wore a Palestinian thobe—a traditional embroidered gown—to her swearing-in ceremony, and Palestinian-Americans like me rejoiced. The moment felt, and was, historic and jubilant. It even sparked a #TweetYourThobe campaign on social media, where Palestinian women posted photos of their own thobes.

For decades, Palestinian-Americans have been demonized and targeted simply for who they are. Our heritage was a liability in public office—not something to celebrate. Policy is made about us without us, furthering our invisibility in American society. It’s surreal that one of our own is now a sitting member of Congress, sworn in wearing a thobe and unapologetically speaking up for Palestinian rights and equality.

Rashida Tlaib is not only the first Palestinian woman to be elected to Congress, but also the first Palestinian Progressive Democrat to hold office and openly and consistently challenge the political status quo on Israel-Palestine. Now, many Palestinians feel like we finally have the opportunity to be truly represented in Washington.

Tlaib’s bold moves could have backfired, but she is no career politician. She didn’t run to win; she ran to shake up Congress and build a more just and livable future for us all. Tlaib wants clean water for her home state, believes health care is a human right, supports a living wage, and wants to see a better world from the United States to Palestine. Palestinian rights are simply, and naturally, part of a larger progressive agenda, where all people are treated equally and have a shot at a decent life, regardless of their race, religion, gender, or the amount of money they have.

This political moment didn’t appear out of thin air. Palestinians have demanded freedom and equality for nearly a century now and faced repression, political intimidation, and violence in the United States as a result. While we celebrated Tlaib’s win, Palestinians are acutely aware of the obstacles that we continue to face. The election win alone will not prevent our harmful policies, but it does indicate things are changing.

Today, Israel’s advocates are having a harder time justifying the oppression of the Palestinian people. The status quo is shifting. Polls show that a majority of Americans of all political stripes want the United States to be fair and even-handed when it comes to Israel/Palestine, while a majority of Democrats would even support sanctions or stronger action against Israel over its construction of Jewish settlements on occupied Palestinian land in violation of international law and longstanding US policy. Even in Congress, there are more members critical of Israel’s unjust policies towards the Palestinians, and during the last session, a groundbreaking bill was introduced to protect Palestinian children from being abused while detained or imprisoned by the Israeli military.

When Tlaib recently announced that she would be leading a delegation of Congress members to Palestine, in opposition to the propaganda trips to Israel sponsored by AIPAC, she knew she was making waves by bucking the tradition. She tweeted: 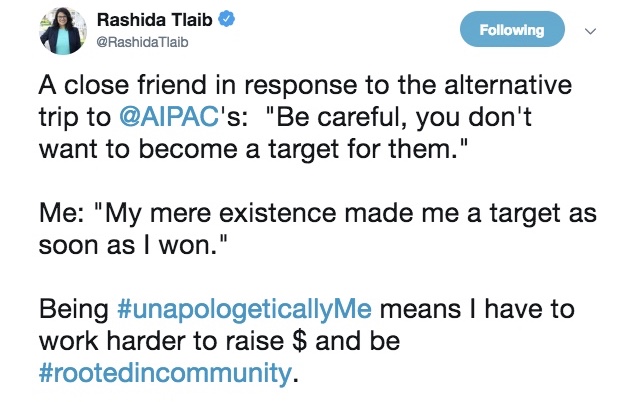 This perfectly exemplifies what life is often like for Palestinian Americans: Those who wish to do you harm will attempt to obstruct you through any and all means solely on the basis of your identity. Tlaib understands she is already a target, so instead of shrinking, she stands tall. She is bravely doing what no other congressperson has done by leading an alternate delegation to Palestine that will not whitewash Israel’s human-rights abuses.

And she did not stop there. Tlaib also announced that she supports a one-state solution in Israel-Palestine—a secular, binational state with full equality for all of its citizens, regardless of one’s religious, ethnic, or national background. This would be a one-person, one-vote arrangement, as opposed to the one-state reality on the ground right now that privileges one community, Israeli Jews, at the expense of another, Palestinian Arabs.

Finally, Tlaib voiced her support for the Boycott, Divestment, Sanctions (BDS) campaign for Palestinian rights, echoing Congresswoman Ilhan Omar. With voices in Congress in favor of BDS, this offers hope to Palestinians and their supporters in the United States that these newly elected lawmakers will form the progressive voice that protects and advocates for the rights of Palestinian Americans, just like they would for any other unfairly attacked constituents.

In a recent op-ed for Elle magazine, Tlaib explained the deeper symbolism of her choice to wear her thobe on her swearing-in to Congress. While living in Palestine, her mother’s family was poor, so she left school to earn a living to help support her family. Her job was to embroider the cross-stitching for thobes.

Tlaib called on her supporters to wear their thobes, to express their heritage, or proudly wear shirts that express their progressive political values. She explained, “We should embrace who we are and not be shamed for it. Too often in this country, recently and throughout history, groups of people have been marginalized, harmed, and even killed for being different. This must change, and we can change this together.”

With a long history of political repression, marginalization, intimidation, and refusal to acknowledge the demands of the Palestinian-American community, what Tlaib has inspired is no small feat. While our earliest generations sometimes had to hide in fear of repression, Palestinian women today are demanding to be seen and heard. When Tlaib chooses to wear a thobe to be sworn into Congress, she is making clear what we already knew about her—she recognizes the consequences of being unapologetically Palestinian, and she carries on as she wishes regardless.

While the Palestinian-American community has historically been rendered invisible or pushed to the sidelines, Tlaib has pushed back, proudly entering the halls of Congress and taking her place. In her beautiful thobe.