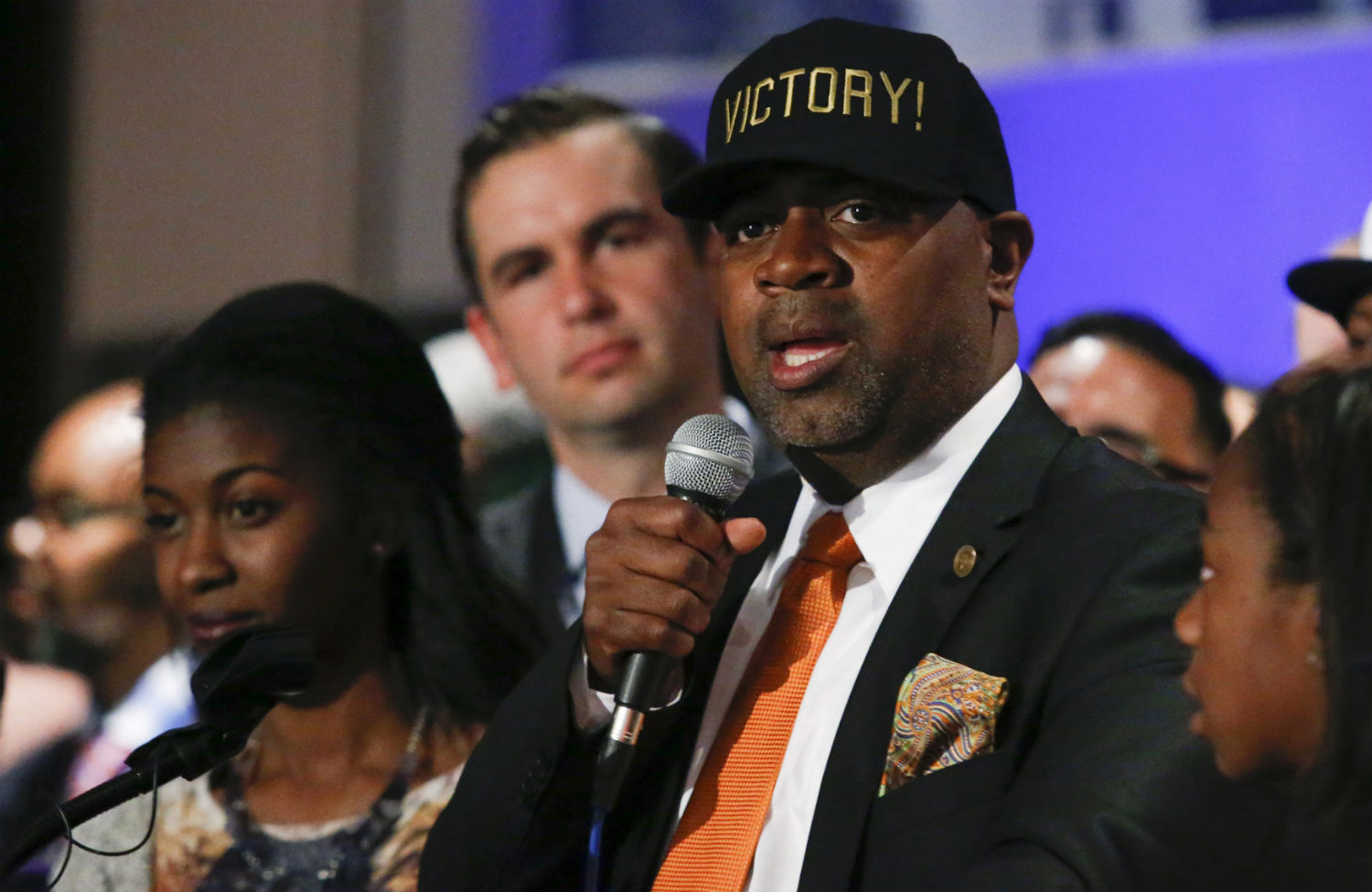 If Bill de Blasio needs a partner in rebuilding America’s urban core, he can now look west, just across the Hudson River, to Newark, where Ras Baraka was elected mayor yesterday. Baraka’s election means a lot to progressives, organized labor, teachers and others in Newark, New Jersey’s largest city—and it is a significant defeat for Governor Chris Christie and his allies in the Democratic party, including former Newark Mayor Corey Booker and the Democratic party bosses George Norcross and Joe DiVincenzo. It might also represent a key tipping point for the next New Jersey race for governor, which—if Christie resigns in the scandal that is plaguing him or, alternately, if and when he resigns to run for president—could happen as early as 2015.

While Baraka was backed strongly by New Jersey’s Working Families Alliance, the teachers union, the Communications Workers of America and the rest of organized labor, lots of money from Wall Street, hedge funds and the wealthy charter school movement poured into Newark on behalf of Shavar Jeffries, Baraka’s opponent in the race. As The Wall Street Journal reported just before the election:

The two men have both looked to New York City for money, but their donor bases are different. Independent expenditure groups have poured money into the local race, with two groups spending more than $600,000 on network and cable television ads, according to a person familiar with the spending. Mr. Jeffries has been backed by a number of New York financiers—much as Mr. Booker was—along with lawyers and education leaders. Mr. Baraka has the support of artists such as Spike Lee and Ms. Hill and professors such as Princeton University’s Cornel West, along with prominent alumni from his Howard University days.

And in another piece, the Journal noted:

Newark First, of course, is a front for the charter-school movement, notes PolitickerNJ:

But the largest contribution to the pro-Jeffries Newark First group came from another group, Education Reform Now, who donated $850,000.

On the group’s website, Education Reform Now defines itself as an organization in which “policy objectives are built around strengthening innovation, public charter laws, accountability, high-quality new school development, transparency on finance and student results, and best practices for turning around low-performing schools.” Members of the group, including board members who have experience working at high-powered Wall Street hedge funds, are active in the Success Academies network of charter schools.

On the issue of education, the difference between the two is stark. Baraka is the principal of a Newark public high school. Jeffries started a charter school. Bob Braun, who writes the popular New Jersey blog Bob Braun’s Ledger, described Baraka’s victory like this:

Ras Baraka, a high school principal and the son of a poet, yesterday easily defeated a Wall Street-backed promoter of school privatization to become the next mayor of Newark. Baraka’s victory repudiated the policies not just of his rival, Shavar Jeffries, but those of Gov. Chris Christie, former Mayor Cory Booker, and state-appointed superintendent Cami Anderson who is trying to close neighborhood public schools and replace them with privately run charter schools.

Jeffries, a professor at Seton Hall University’s law school, had won the endorsement of the Newark Star-Ledger, which in 2013 also endorsed Christie for re-election and then, embarrassingly, regretted and withdrew that endorsement after the George Washington Bridge lane-closing scandal erupted. The Star-Ledger accused Baraka, the son of Amiri Baraka, the legendary Newark poet and agitator, of “energiz[ing] his base with an old-school black nationalism that seems inspired by his father, but outdated.”

It’s no surprise. Moran has used the state’s largest paper to cheerlead for the dissolution of local schools to make way for the shiny penny of corporate charter schools and the tycoons that come with it, and the PR firms that sell it, who see dollar signs where they should see kids, and fertile ground where they should see communities. So, no surprise—it’s just Moran backing Christie again, backing the mayoral candidate who’ll let Cami keep running amok, backing the guy whose campaign is funded by investors who expect Shavar Jeffries to help Cami Anderson to help Chris Christie keep their investment opportunities hot for them.

Outside Newark, supporters and opponents of Baraka lined up like this: backing Jeffries were New Jersey’s two big political bosses, George Norcross, who runs South Jersey, and Joe DiVincenzo, the boss of Essex County, where Newark is located. Both Norcross and DiVincenzo, who are key allies of Governor Christie, are expected to support State Senate President Steve Sweeney if and when he makes his own bid for governor. Meanwhile, a possible rival of Sweeney’s for governor, Jersey City Mayor Steve Fulop, threw in with Baraka, and so Baraka’s win could help turn Newark, a bastion of Democratic urban voters, into a political base for Fulop in a Fulop vs. Sweeney race. As PolitickerNJ put it:

In bucking the Essex Democratic Party establishment, Fulop by extension threw the equivalent of a political hand grenade into the laps of those same establishment brand names who showed up uncomfortably at a handful of Barbara Buono for Governor events last year while madly disparaging her campaign in text and cellphone as hopeless.

By breaking from the stage he had stood on with Sweeney and DiVincenzo and supporting Baraka, Fulop realigned his own template from a year ago, when he wavered his toe at the edge of the gubernatorial contest, never uttering Buono’s name while torturously finally deciding on the safely impersonal sound-bite of supporting the Democratic ticket in the general election.

The Baraka victory also was a repudiation of Essex County Executive Joseph DiVincenzo, who backed Jeffries. DiVincenzo, who once entertained fantasies of becoming governor himself, proved to be a weak organizer in the race. He betrayed Democratic gubernatorial [candidate] Barbara Buono last year to back Gov. Chris Christie, a Republican.

During the campaign, Baraka frequently linked Jeffries to Norcross and to DiVincenzo (who endorsed Jeffries officially late in the campaign). And State Senator Richard Codey, a former governor himself and a bitter opponent of Norcross’ one-man-rule in South Jersey, backed Baraka. As the Star-Ledger reported just before Tuesday’s election:

State Sen. Richard Codey (D-Essex), who is backing Baraka, said Norcross is trying to influence the election. “It’s all about George and his money,” Codey said. “That’s who’s pumping the money in. He cares about power. It’s conquering territory.”

Staying out of the race, officially at least, was former Newark Mayor Corey Booker, now a US senator, who was the darling of the charter school movement and a quiet ally of Christie’s. Baraka’s win is a repudiation of Booker’s era, when Newark lost control of its own school system to the state government and to Christie.