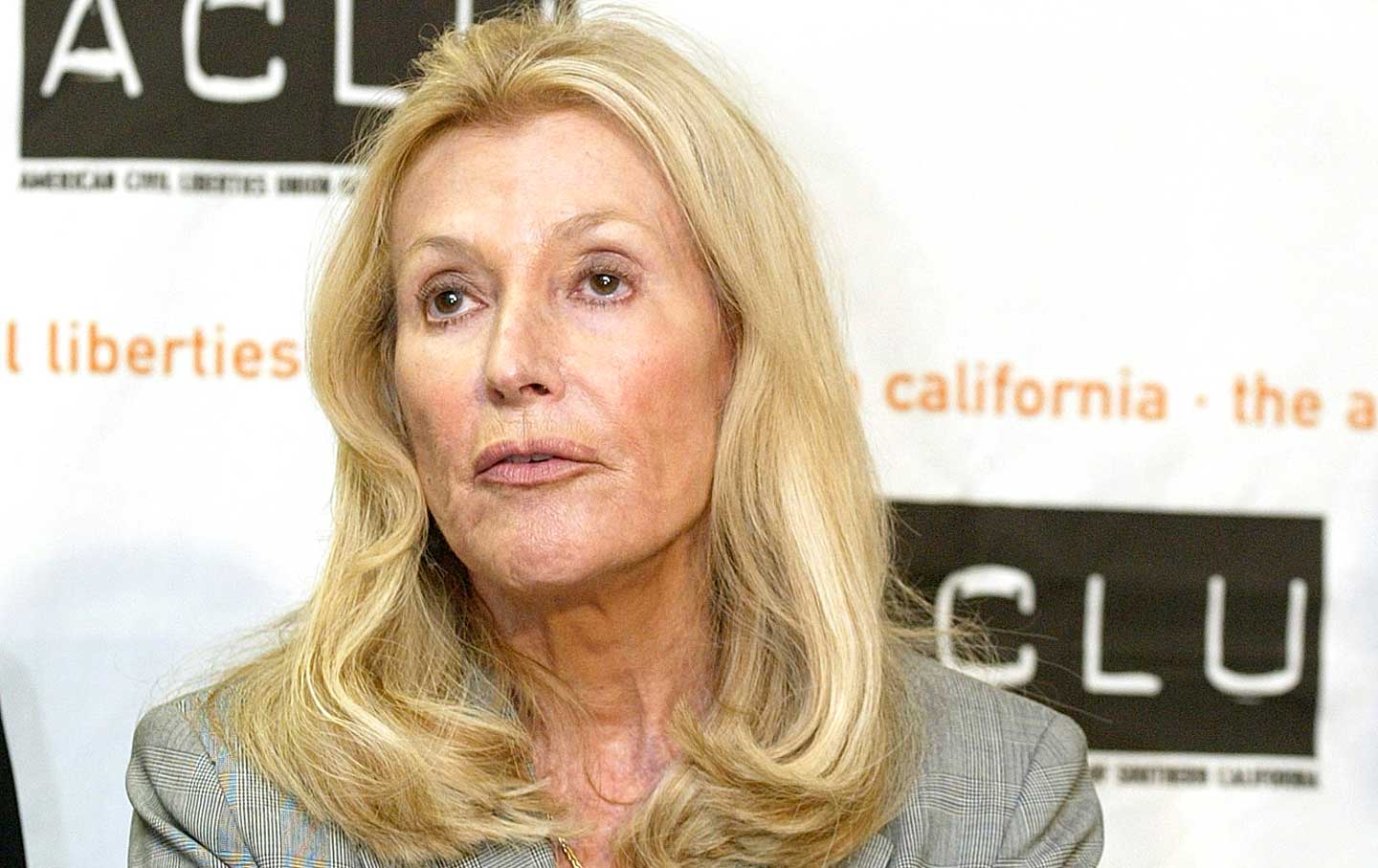 Ramona Rispton, an executive director for the ACLU, expresses her disappointment on the ruling of the lawsuit against the California recall vote during a news conference at the ACLU's offices in Los Angeles on August 20, 2003. (AP Photo / Damian Dovarganes)

Ramona Ripston, who was executive director of the ACLU of Southern California (SoCal) for more than 40 years, passed away in November at the age of 91. I first met her in 1987, when former SoCal ACLU Foundation chair Stanley Sheinbaum suggested that I occupy his old position, which I did for the better part of the next decade. Ramona immediately impressed me with her steely determination to actualize a progressive agenda, her sophistication as a strategist, and a grace and sweetness that is all too rare on the American left. Having moved from New York to Los Angeles in the early 1970s Ramona retained her Queens accent and addressed complicated political struggles with an amused twinkle in her eyes.

On January 13, I joined the more than 250 people crowded into a lecture hall at the Loyola College of Law to remember her. In addition to present and former ACLU lawyers and family members the memorial included remarks from her successor, Hector Villagra; current Los Angeles Mayor Eric Garcetti, his predecessor (and long-time ACLU Board member), Antonio Villaraigosa,; civil-rights icon Rev. James Lawson; legendary TV producer and activist Norman Lear; ACLU Executive Director Anthony Romero; and videos from Ruth Bader Ginsburg and Aryeh Neier.

Former ACLU lawyer Carol Sobel recalled coming to meet with Ramona about a job in 1977 shortly after the ACLU of Illinois defended the rights of American Nazi Party members to march in Skokie, Illinois. The entryway was occupied by Irv Rubin of the Jewish Defense League and several of his cronies. Rubin was an intimidating figure who recently had gotten into a fistfight with a local Nazi on the set of a local Los Angeles TV station. He subsequently offered $500 to anyone who would kill a Nazi and nailed a dead pig on the door of Lear’s home because of his support for the ACLU.

Stepping over the protesters, Sobel entered the executive director’s office, where an ACLU board president was demanding that Ramona call the police department and have the JDL people removed. Ramona insisted that she was not going to call the cops to remove demonstrators from the office of the ACLU, because such an action would be hypocritical for an organization devoted to the freedom to protest. Instead, she went into the lobby and told Rubin that she was ordering pizza for the staff and wanted to know whether she should get some for them as well. Sobel recalled with a proud smile, “They were so disarmed that they all left five minutes later.” 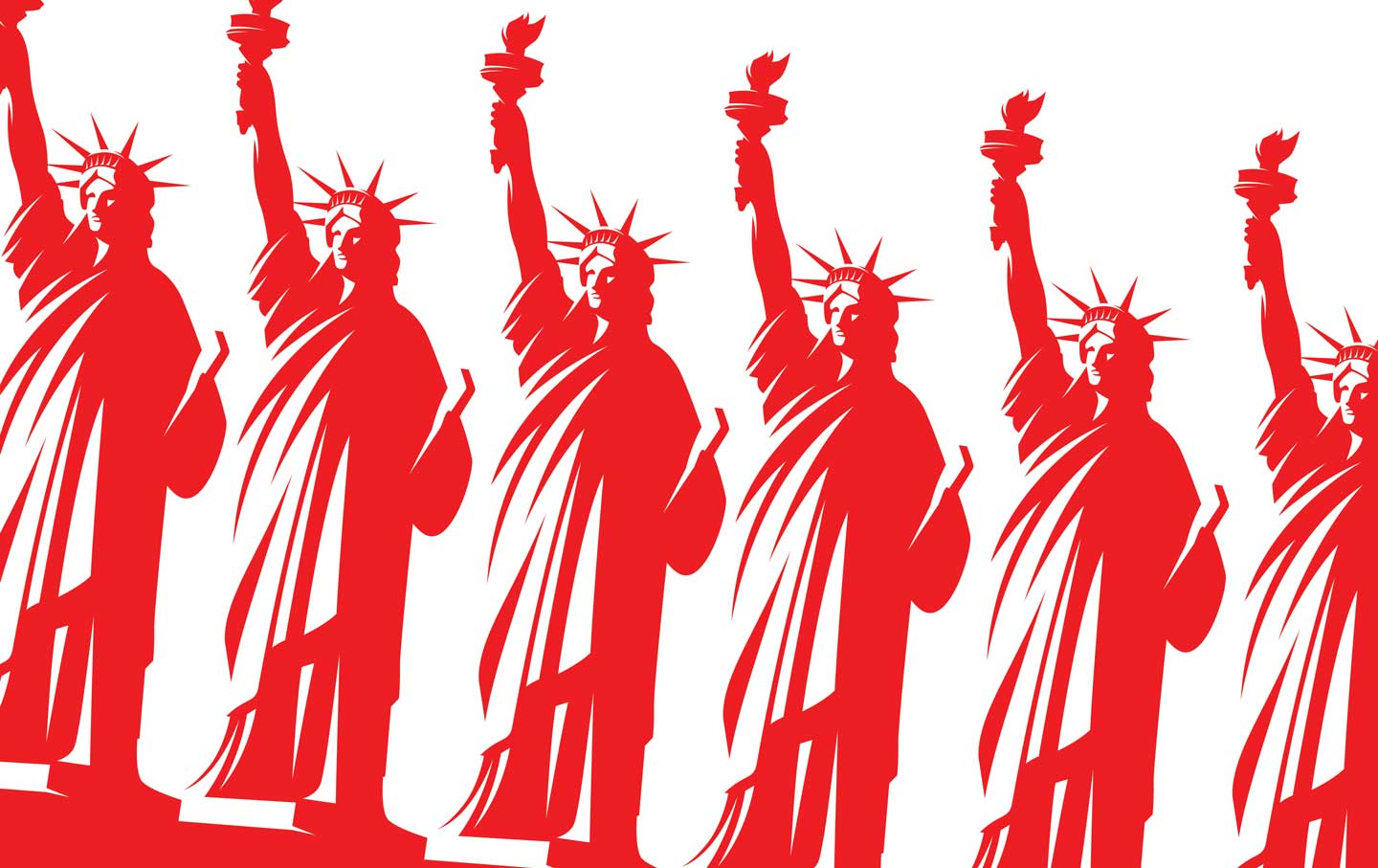 Can the ACLU Remake Itself as a Mass Movement for Progressive Change?

Ramona and Sheinbaum re-imagined civil liberties to include a wider concept of individual rights that included economic security, more a civil rights organization than merely a libertarian one. As Ramona often reminded audiences, the concept of “liberty and justice for all” included justice. The So.Cal. affiliate was the perfect home for this vision. They had fought loyalty oaths during the McCarthy period when the national office refused to do so.

Ramona moved west, in part, because SoCal opposed the Vietnam War when the New York–based national organization wouldn’t. By the time I became chair, ACLU National had concurred with Supreme Court decisions that equated the spending unlimited amounts of money on political campaigns with speech. Ramona and SoCal loudly disagreed.

Ramona led the ACLU to successful litigation that increased welfare payments for Californians and that increased funding of public schools in poor districts. The ACLU forever changed the politics of Los Angeles County in 1988 when it sued the Board of Supervisors to redraw gerrymandered district lines that fragmented Latino voting power. New boundaries for the first district were drawn, and Gloria Molina was elected the first Latino LA County supervisor.

She was strategic in her use of the media. Ramona told Gary Williams, another former ACLU lawyer, to sue the Orange County School Board when they stopped providing breakfast for elementary-school students many of whom came from families too poor to feed them at home. The program was not mandated by law, and Williams initially resisted given the low likelihood of a courtroom victory. But Ramona held a press conference announcing the litigation, and the school board was so embarrassed at being exposed for depriving kids of food that it reversed course within a week. No trial needed.

She was a relentless fundraiser, even persuading Republican Arnold Schwarzenegger to personally donate $10,000 to the foundation while he was still governor. Although Ramona didn’t hesitate to sue government officials when the agenda required it, she maintained mutually respectful relationships with most politicians who were on the receiving end of such lawsuits, many of whom attended annual ACLU dinners.

She inspired many in the Hollywood community to help with what she referred to as “public education.” Barbara Streisand, Sidney Poitier, Jane Fonda, Billy Crystal, Sarah Jessica Parker, and Jackson Browne were among many artists who participated in ACLU events and who looked to Ramona for political guidance. Her ability to connect with people as individuals was not limited to the elite. Shortly after the ACLU took residence in a building in downtown LA, Ramona befriended a homeless man who hung out there and invented the job of facilities manager for him, which he held for years.

She was the first woman to lead a major ACLU affiliate (her first role had been as a volunteer in New York in what was then called the “ladies’ auxiliary”) and she mentored many women in and out of the ACLU. Connie Rice remembered that Ramona was one of the first to call when she started her job as the director of the NAACP Legal Defense Fund in Los Angeles. At the same time Ramona was relentlessly pragmatic in achieving her goals. There were a few objections when Hustler publisher Larry Flynt made large donations, but she insisted, “As long as I can do anything I want with the money, I’m going to take as much as I can get.”

To articulate our values in 1988, after George H.W. Bush attacked Michael Dukakis for being a “card-carrying member of the ACLU,” we produced a TV commercial featuring Burt Lancaster. The actor was an ardent civil libertarian, but also a movie star used to deference on a set. Before his oration into the camera, he asked Ramona, “Honey, can you get me a cup of coffee?” Several of us winced in horror, but Ramona got him the drink, and then laughed as she whispered to me, “I don’t mind. These old guys don’t know any better.” The spot was shown on the Today show. Rice fondly remembered shopping for shoes with Ramona. Sobel jokingly referred to Ramona as a “Neiman–Marxist” and quipped that she wore a “designer hair-shirt.” When the pressure at the office got too much to bear, the two of them would often go to fashion shows at I Magnin and Bullocks.

Current National ACLU leader Anthony Romero, whose vision of civil liberties has been consistent with the SoCal civil-rights spirit, told me how Ramona supported him in 2002, during his first year on the job, when he was subjected to a no-confidence vote by a cabal of board members who didn’t agree with his post- 9/11 tactics. She flew to New York to demonstrate solidarity with him, and when she saw Romero stressing out in his office, she took him to Sax Fifth Avenue, where Ramona insisted that they both buy black leather pants to wear to the board meeting—where Romero prevailed.

Rice once asked Ramona why she let her and those from other organizations speak first at press conferences and shared credit for lawsuits with them even when ACLU lawyers did most of the work. Ramona laughingly answered, “Because you’re all mine.” Villaraigosa said admiringly, “She never used the phrase ‘white-skin privilege,’ but she was so sensitive to it. She was so far ahead of her time.”

I benefitted from her inclusiveness too. After the Rodney King beating in Los Angeles, the ACLU was at the forefront of renewed efforts to get rid Los Angeles Police Chief Daryl Gates. Despite the fact that I was a manager for rock musicians and had no previous experience in civil-liberties beyond defending controversial lyrics, Ramona encouraged me to be an ACLU spokesman on local radio debates, in meetings with soon-to-be secretary of state Warren Christopher, whom Mayor Bradley had asked to help reform the department, and at a press conferences where we convinced Ed Asner to read notorious Gates quotes, and another where Wesley Snipes and other African-American performers described being pulled over by police for “driving while black.” It was only later that I came to realize how unusual it was for someone in her position to so generously share the spotlight.

Ramona’s longtime colleague Mark Rosenbaum reminded us, “Los Angeles was a mean city when she came here. The police were vicious. The INS terrorized Latina neighborhoods and workplaces, and city and country governments were white-male clubs. The homeless were criminalized for their poverty or bad luck. Bigotry against the LGBTQ community caused the AIDS epidemic. The schools were separate and so unequal. Ramona, more than anyone else, changed all this. She changed a tiny office above a wig shop and orange juice and donut stand into the most influential and well-known ACLU in the nation.”

The collective energy of her memorial was not merely an elegy but also a reaffirmation of values. Ramona never stopped worrying that the hadn’t done enough. In 2013, Ramona rhetorically asked a writer for the Los Angeles Times, “Did I make a difference?” Not long afterward she developed dementia and rarely spoke, and it was not clear how much she understood. Nevertheless, the last time Rosenbaum visited her, he talked about the growing homeless problem in Los Angeles.” From out of nowhere it seemed, from some recess of her soul she said, ‘We have to do something.’”

As I walked out into the parking lot at Loyola I suddenly burst into tears. Part of me was weeping for the loss of a friend, part because of the reminder of the brevity of life, part the suffering and discord that remains in America, and part in mourning for the end for of a meaningful chapter in my own life; but there were also tears of joy for the inexpressible beauty and mystery of the human spirit and the recognition of the glory of a great soul and a beautiful community inspired by her and still determined to “do something.”