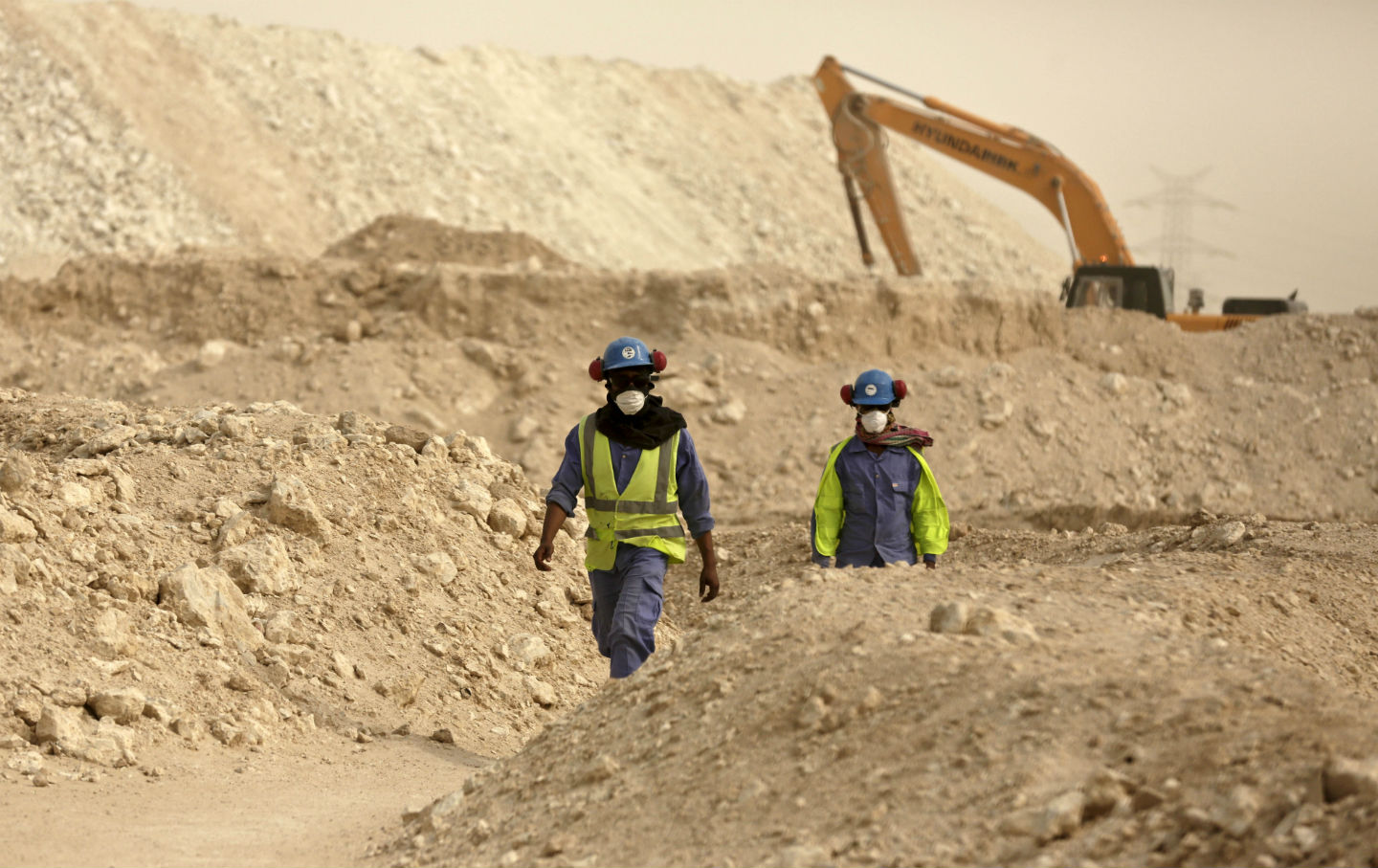 While FIFA continues to sink deeper into a mire of scandal, the deepest hell in the world football body’s dominion is reserved for the workers toiling at the sweltering construction zones of Qatar, the 2022 World Cup host. As the legal turmoil swells in Geneva, however, human rights groups see a potential opening to revisit the controversy over whether Qatar deserves to be hosting the games at all.

But the contrast between law enforcement’s scrutiny of FIFA’s dirty backdoor dealings, versus the relatively subdued official response to Qatar’s industrial homicide, reflects the ethical perversion that drives the football industry.

Days before the US authorities’ corruption indictments hit the fan at FIFA’s Swiss headquarters, Amnesty International aired the latest of several reports on alarming levels of labor abuse and injury linked to Qatar’s World Cup development. Migrant laborers, who make up the vast majority of Qatar’s labor force, primarily in domestic and construction work, face brutal conditions, poverty wages, and virtually no labor protections or recourse against abusive employers. They are often drawn from poorer South and Southeast Asian nations by unregulated recruiters running a global web of debt bondage. A medieval-type contracting arrangement known as kafala effectively bars workers from leaving or changing jobs without their employers’ approval. The draconian system is used for other controversial prestige-seeking projects in the Gulf, such as the migrant labor–fueled developments of New York University’s and the Guggenheim’s branches in Abu Dhabi.

“FIFA has a clear responsibility to act in the face of the evidence of labour exploitation” —Mustafa Qadri, Amnesty International

The human toll is stunning: lethal accidents and heat exhaustion related to World Cup development—including facilities, infrastructure, and other commercial projects—have led to, according to a 2014 audit, the deaths of 964 workers from Nepal, India, and Bangladesh in 2012 and 2013 alone. By contrast, South Africa’s World Cup left two dead. The International Trade Union Confederation (ITUC), which has long condemned Qatar’s labor rights record, calculates some 1,200 workers have already perished. Data is sketchy, but with a workforce of some 1.5 million, at this rate, about 4,000 casualties will pave the World Cup’s gateway by opening day. Despite pressure from the United Nations, the government has done little to independently investigate construction-related deaths.

My company has never given me my ID so at any time the police can arrest me and I will be stuck in jail. Because of this I rarely leave my camp. My life is just the construction site and this dirty room…. my sponsor has my passport and won’t let me work for another company.

Public outcry over the labor issues has paralleled other corruption charges surrounding the bidding process for both Qatar in 2022 and Russia in 2018. But Sepp Blatter voiced only tepid criticism on human rights, while FIFA refused to reconsider the votes despite ample evidence of bribery.

Pressured by activists, Qatar’s authoritarian government last year promised some labor reforms. The government moved to increase the penalties for passport confiscation by employers, improve worker safety protections, and expand the labor inspection force. There was official discussion on revising the contracting system and the grievance procedure for workers. But workers today remain extremely vulnerable, restricted from organizing, and still locked under kafala.

Over the last 12 months, little has changed in law, policy and practice for the more than 1.5 million migrant workers in Qatar who remain at the mercy of their sponsors and employers. On the crucial issues of the exit permit, the restriction on changing employers in Qatar’s kafala system, protection of domestic workers and the freedom to form or join trade union—there has been no progress whatsoever.

It’s perhaps the perfect illustration of the tragedy of corporate exploitation that’s been poured into this football bonanza that the 2022 games are now in danger of not happening at all. Still, it’s doubtful that FIFA will be moved to rerun the vote or otherwise alter the plans for the next two World Cups, in Russia and Qatar, despite the votes for both of those being ringed by corruption scandal, and perhaps more evidence of bribery to be revealed by investigators.

FIFA claims that at this point it “has no legal grounds to take away the hosting of the FIFA World Cup from Russia and Qatar.”

According to Business Insider, Qatar has already sealed its bid with the estimated $200 billion it has sunk into infrastructure, including the phantom city erected specifically for the games, in a country with no footballing tradition.

Nonetheless, activists continue to pressure both FIFA and the 2022 corporate sponsors for a revote. The ITUC tells The Nation via e-mail: “If Qatar does not reform its labour laws to meet international standards—abolish kafala, allow migrant workers to organise unions and ensure effective grievance mechanisms—then FIFA should re-run the vote. These are fundamental conditions for awarding the World Cup hosting rights.”

Amnesty takes no official position on Qatar’s bid per se, but according to Mustafa Qadri, Gulf migrant-rights researcher with Amnesty:

While the primary responsibility for the rights of workers in Qatar rests with the Qatari authorities, FIFA has a clear responsibility to act in the face of the evidence of labour exploitation…FIFA has spent much time, money and political capital investigating alleged corruption in the Russia and Qatar World Cup bids… But the organisation has yet to demonstrate any real commitment to ensuring Qatar 2022 is not built on a foundation of exploitation and abuse.

This isn’t the first time the World Cup has been implicated in human-rights controversies. As Dave Zirin reported, Brazil’s World Cup led to mass protests in response to displacement of communities, environmental destruction, and worker abuse in the preparation for the games, along with authoritarian security tactics.

Even beyond the epidemic of migrant abuse, the deepest scandal surrounding the World Cup is that FIFA’s empire still stands, lording over the most celebrated event in athletics. The dirtiest taint isn’t hidden but brazenly displayed in the corporate greed that guarantees that millions will delight in the gleaming spectacle, blind to human cost paid for their leisure.