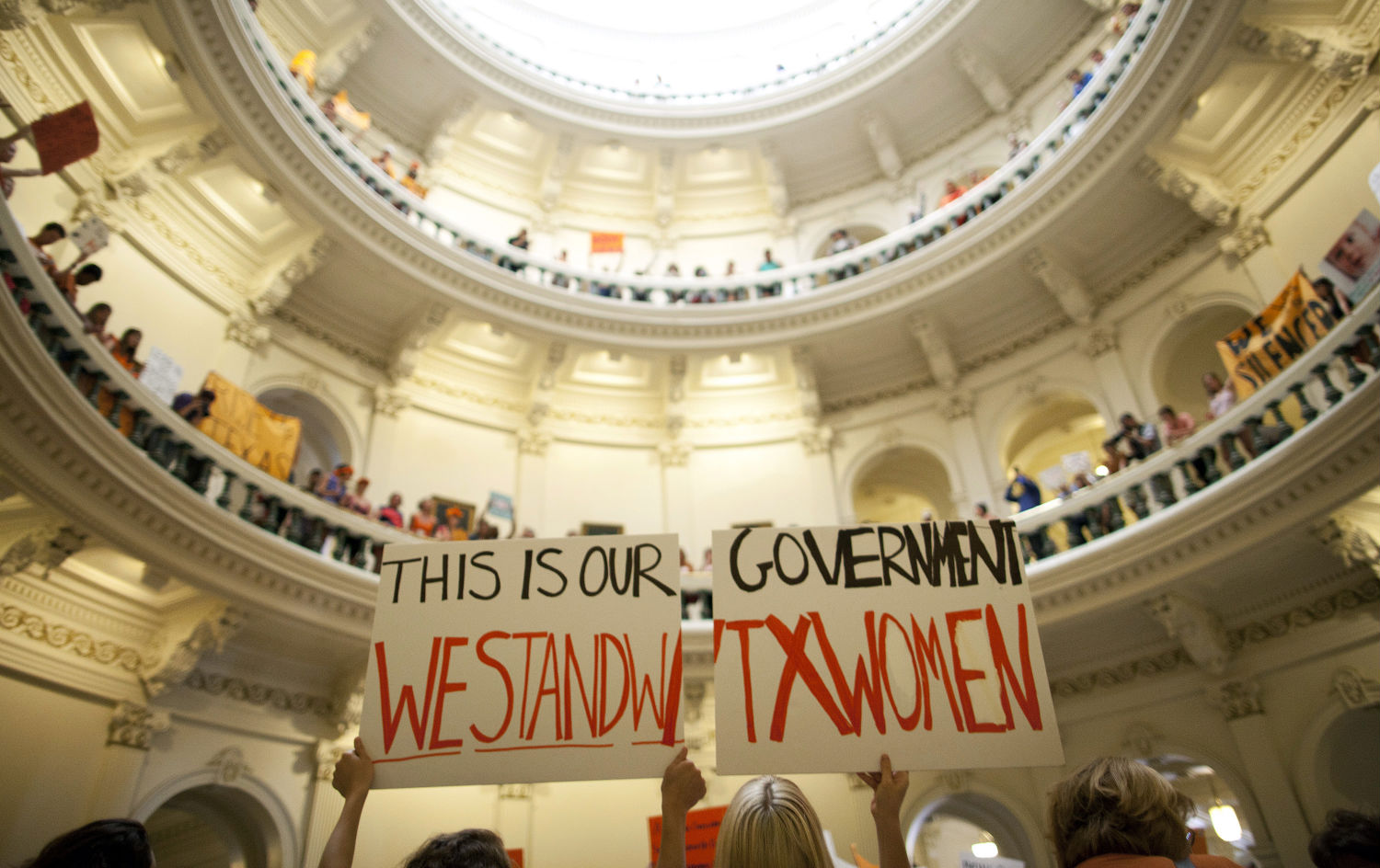 Last week, an appeals court lifted an injunction on Texas’ exceedingly restrictive abortion law, which forces abortion clinics to obtain admitting privileges at nearby hospitals. This requirement—which went into effect when the injunction was lifted Friday—may close a third of the state’s clinics, according to research carried out by the Texas Policy Evaluation Project. Yesterday, attorneys for providers asked the Supreme Court to reinstate the injunction. I spoke with Merritt Tierce, executive director of Texas Equal Access Fund in North Texas about the law, how Texas women are faring and what we can all do to help.

Can you explain a bit about what TEA Fund does, for our readers who may not be familiar with abortion access funds?

TEA Fund provides financial assistance to low-income women who want an abortion and can’t afford it. Our clients are usually referred to us by one of the clinics we work with—I used to say one of the “dozen or so” clinics we work with, but now it’s basically down to three, plus one in New Mexico and one in Louisiana. Our volunteers conduct a brief intake interview to assess the caller’s need and situation. If the caller meets our eligibility requirements, we will commit an amount between $25 and $400. We never cover more than half the cost of the procedure, and our average grant right now is about $150. The money is paid to the clinic after the procedure is performed (we’re billed just like any other vendor). We are a small 501 (c) (3) nonprofit with an annual budget of about $200,000. We are usually able to help about 1,000 women annually, but have never been able to meet the need. We could easily commit $10,000 each week, and right now we commit only $3500.

Late last week an appeals court upheld a Texas law that widely restricts abortion access—one third of the state’s clinics could close as a result. How prepared was the TEA Fund and other reproductive justice organizations? Have you been girding yourself for this kind of loss?

We have all been preparing for the law to go into effect since the end of July. Clinics have been working overtime to try to get [hospital admitting] privileges for their physicians. The Texas Policy Evaluation Project has done phenomenal work compiling the data to predict the impact the closures would have on the state. NARAL Pro-Choice Texas, the Center for Reproductive Rights, Whole Woman’s Health, and Planned Parenthood have been coaching all of us to remember this is a long game. The fury and momentum we all felt coming out of this summer has to be sustained, and converted into concrete actions and votes.

Several new organizations have been created since the 2013 legislative session ended, and we are working with the new groups and our longtime allies the Lilith Fund [a reproductive equity group that assists women exercise their right to abortion] and Jane’s Due Process [a nonprofit that provides legal representation to pregnant minors] to ensure that we support one another’s efforts as efficiently as possible. We have also all increased our fundraising, knowing that not only would we be facing calls from more people, but that each person who needs financial assistance would need more after the law went into effect.

What are you hearing from the women you work with? Are they already feeling the impact of the law?

There have been a variety of responses from fear to anger. Many have had to reschedule their appointments at a different clinic. That means the people who scraped together the $100 for the sonogram will have to pay for it again, and wait twenty-four hours again, because of Texas’ sonogram law: the provider who performs the abortion must administer the sonogram. So if you go to a different clinic, there’s nothing the clinic can legally do to see you without starting all over. The rescheduling itself means that some women will be unable to afford the abortion because the cost will increase as the pregnancy advances.

My sense is that most of these women did not know much about what has been going on in the Texas legislature. It’s important to acknowledge that simply being able to pay attention to the news is a luxury many people don’t have, especially people who are struggling to find food, shelter, employment or healthcare, or people who are trying to escape intimate partner violence. What’s so infuriating about these laws is that the people who have the least ability to fight back are the very people the laws affect most severely.

What can people expect to see in terms of the law’s impact over the next few months?

More women will try to have an abortion outside of the healthcare system. The use of Cytotec (misoprostol) will increase, especially in south Texas and the Rio Grande Valley, where it is more easily available (and where there is now no access to abortion). Inevitably some women will harm themselves as a direct result of the clinic closures. Many women will continue unwanted pregnancies because they have no other options. Because of the shame and stigma that surround abortion, we may not hear these stories in detail; however we know that, historically, this is what happens when abortion access is restricted.

We can also expect to see the fight continue and intensify, as a result of the severe body blow this law has dealt. We were angry; now we are nuclear.

Almost every anti-choice talking point I’ve read about this law mentions that restrictions on abortion are meant to “protect women.” What’s your response to that?

What I see in the state’s argument and the Fifth Circuit’s ruling is an obvious prejudice toward women who seek abortion for any reason, and consequent decisions that exploit the legal limits of “undue burden” to push on the meaning of “undue.” I see a really Calvinist sadism in the perspective that any woman who wants an abortion for any reason must bear whatever burden there is to be borne en route to that abortion. The burden is, in truth, her punishment from the state.

It’s insane to me—and I mean truly insane—that they have made any headway at all with the idea of “protecting women,” because abortion is safer than not only most medical procedures but a ton of other things people do every day. The only climate that could have allowed this preposterous cloak of an angle is widespread ignorance about abortion that allows the taboo to remain intact.

What’s next for Texas reproductive justice activists in the short and long term?

We are working to establish a statewide practical support network, to help people get to the remaining clinics by assisting with transportation and lodging costs and arrangements. Texas is an enormous state with limited public transportation, especially from the rural areas that have been hit hardest by clinic closures, so this is the key focus for all of us right now. Long-term our focus will be to elect pro-choice leaders who can begin to restore access to reproductive healthcare. Another area of primary importance is educating the public about abortion, so that everyone is on the same page about what it really is. Basic abortion realities have to be common knowledge, or we will continue to be vulnerable to these attacks.

What can people who don’t live in Texas to do help, besides donating to groups like the TEA Fund? (Though they should certainly do that as well!)

We definitely do need the money! But we also implore people to recognize that this situation is not solely the result of extreme conservatives having their way within an extremely conservative state. It is just as much a result of political complacency and/or neutrality among an immense population of Texans who actually do support reproductive rights, just as a majority of Americans do. But silent support of justice and freedom doesn’t cut it.

If people who aren’t necessarily activists or writers or politicians had been more “out” about abortion, it could have been normalized over the past forty years. The stigma could have been broken down and abortion could have been assimilated into the mainstream practice of healthcare, where it belongs. Instead we legalized abortion but let it remain taboo, and that’s exactly what has given the religious right room to work in. The only way to make abortion acceptable and keep it legal is to learn about it and talk about it—and I specifically mean in everyday conversation.

That should include not only the tragic, compelling stories of people who were raped, or fetal anomalies, or maternal health issues, but the story that is in fact the most common abortion story: the first-trimester procedure chosen by someone who just doesn’t want to have a baby right now. The lawsuits and the media coverage always focus on the most sympathetic cases, without acknowledging that while of course those cases absolutely deserve our sympathy, most women will not experience anything like what they see and hear in the media.

Fewer than 1 percent of abortions occur after twenty weeks, so even if people do feel tremendous sympathy for those cases, it’s remote. It is too easy for people to shut out experiences that seem too foreign, and statistically it isn’t likely that a woman who needs an abortion will be able to identify with any of the experiences she has seen in the media.