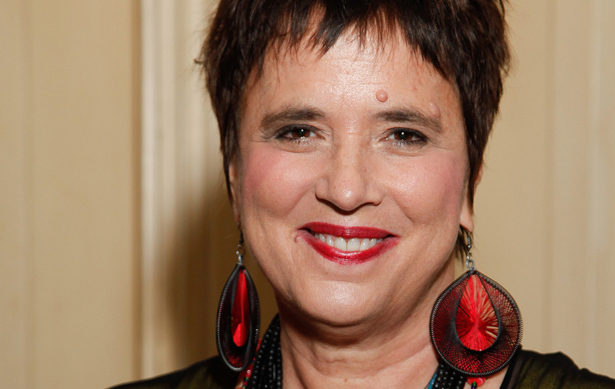 Eve Ensler’s new play O.P.C., starring Kate Mulligan, opens November 28 at the American Repertory Theater in Cambridge. Ensler is the author of The Vagina Monologues and the co-founder of V-Day. This interview has been edited and condensed.

LF: Growing out of V-Day, people in hundreds of countries mark February 14 with mass dancing to protest violence against women and girls. This year’s event is dubbed “One Billion Rising: Revolution.” What does “revolution” mean to you?

EE: Many things. It’s overthrowing a state of mind, a paradigm we’re living in—hierarchy, dominance, a few profiting off all the goods and the rest having nothing. On a personal level, it means overcoming the things that keep us shackled to existing structures and things we’ve done before. We can only do the revolution together. To do it alone is too frightening.

LF: What’s the most revolutionary thing One Billion Rising [OBR] has accomplished so far?

EE: There are lots of examples. After the killing of a transgender woman [allegedly] by a US Marine in the Philippines, Gabriela—the women’s organization there and a leader of OBR—held massive protests. Confronting their own police for protecting the US military over the people, Gabriela drew on the movement’s global solidarity to bring attention to the issue. Of all the revolutionary things we’re talking about, the most fundamental is: What happens when we have each other’s backs?

LF: You have a new play. Can you tell us about O.P.C., “Obsessive Political Correctness”?

EE: It’s about the relationship between a centrist Democratic mother and a revolutionary daughter, and through their story we see, I hope, something universal about mothers and daughters and the need for system change. A lot of people have completely lost faith in the system. In O.P.C., the daughter, Romi, is a freegan and a squatter. Her mother is running for Senate. The play looks at what happens when people who want system change are up against another generation who—like many of their mothers—have spent a lifetime trying to get into the system, have finally gotten in, and believe they can change it from within.

EE: A lot of us are in struggle with the policies and methods of most people running for office. The question is: How do we generate a dialogue that’s looking at the whole capitalist, racist, patriarchal structure? Is it possible to imagine a different world not based on profit, growth or destruction, but rather where the majority of people are living well and eating well, getting educated and feeling valued?

LF: Henry Kissinger told NPR he’d be comfortable with a Hillary presidency. Would you?

EE: I’m not comfortable with anyone Kissinger would be comfortable with. But I don’t want my opinions infecting people who see the play. O.P.C. is a political comedy. Like Romi, I believe we’re on the verge of a potential new story. I’m interested in how we create that story. If you look at the UN, Congress, the structures that rule those institutions are determining the outcomes. I’m interested in building new ways of operating to produce new outcomes. I totally understand women’s need to have power and a place inside existing institutions. The trouble is, after fighting for years, we can finally buy our Mercedes-Benz and there’s no road. That’s where we are. As Romi says in the play, “We were shut out for so long, getting in becomes all that matters; getting in becomes what you’re after rather than why.” How do we redirect our dreams to a different scenario?

LF: What change scares you?