Demonstrators chant before riot police officers during the seventh day of protest calling for the resignation of Governor Ricardo Rosselló in San Juan. (Reuters / Marco Bello)

On July 10, journalist Sandra Rodríguez posted on her blog several pages of leaked texts between Puerto Rico’s Governor Ricardo Roselló and some of his collaborators. Three days later, Puerto Rico’s Center for Investigative Journalism released all 889 pages of these messages. The texts were misogynistic, homophobic, and fat-phobic. The men joked about bodies decomposing in the aftermath of Hurricane Maria, and the chat log contained abundant evidence of corruption. The leaks triggered demonstrations across Puerto Rico and a viral social media campaign with hashtags such as #RickyRenuncia. One by one, the cabinet members in the group chat stepped down, and on the night of July 24, after 11 days of continuous, island-wide protests, Roselló himself resigned. The demonstrations continue, though, as islanders demand accountability from the candidates for interim governor, a comprehensive audit of Puerto Rico’s debt, and curtailment of austerity measures.

During this month’s protests, the use of police force has been excessive and unchecked. In at least five instances, the riot police—under the euphemism “crowd dispersion”—tear-gassed and attacked peaceful protesters in front of the governor’s mansion in San Juan, according to Mari Mari Narváez, executive director of Kilómetro Cero, an organization that works to foster state and police accountability in Puerto Rico.

In one case, on July 18, police warned protesters over loudspeakers that the Constitution no longer applied. Those of us watching events unfold on local TV heard officers announce, “Su actividad ha dejado de estar protegida por la Constitución,” or “Your event is no longer protected by the Constitution,” shortly before they shot tear-gas canisters and rubber bullets at nonviolent protesters and struck them with batons.

Observers from the ACLU and Amnesty International have described the arbitrary termination of protests as a de facto and illegal curfew declared by the police chief. Stating that a protest is no longer protected by the Constitution, they say, was a pretext to attack protesters—one more typical of totalitarian states than of democracies. “This is a police force that is acting more like a protective squad for the governor, what we call in español the ‘Escuadrón de Rosselló,’” William Ramírez, executive director of the ACLU of Puerto Rico, told Buzzfeed News.

It’s no wonder, then, that on July 22, as part of the largest demonstration in Puerto Rican history, protesters “tucked in” the First Amendment at 11 pm. Protesters distributed about 200 children’s books written by Puerto Rican authors and read aloud bedtime stories to the Constitution.

So far, Kilómetro Cero has documented 37 instances of violent use of force or questionable arrest since these protests began—almost certainly a massive undercount. Videos posted to social media and by the mainstream press show repeated examples of police brutality. In one clip, a riot officer confronts two unarmed youths and shoots them with rubber bullets as they hold their hands high and ask for clemency. Another video shows police shooting Rocío Juarbe in the back with rubber bullets, even as she was asking other demonstrators to refrain from throwing water bottles and empty canisters at the officers. Police also struck one bystander with their batons, as he screamed, “I was just standing here, I was not doing anything!” The man required medical assistance, and video of the incident was published the next day. 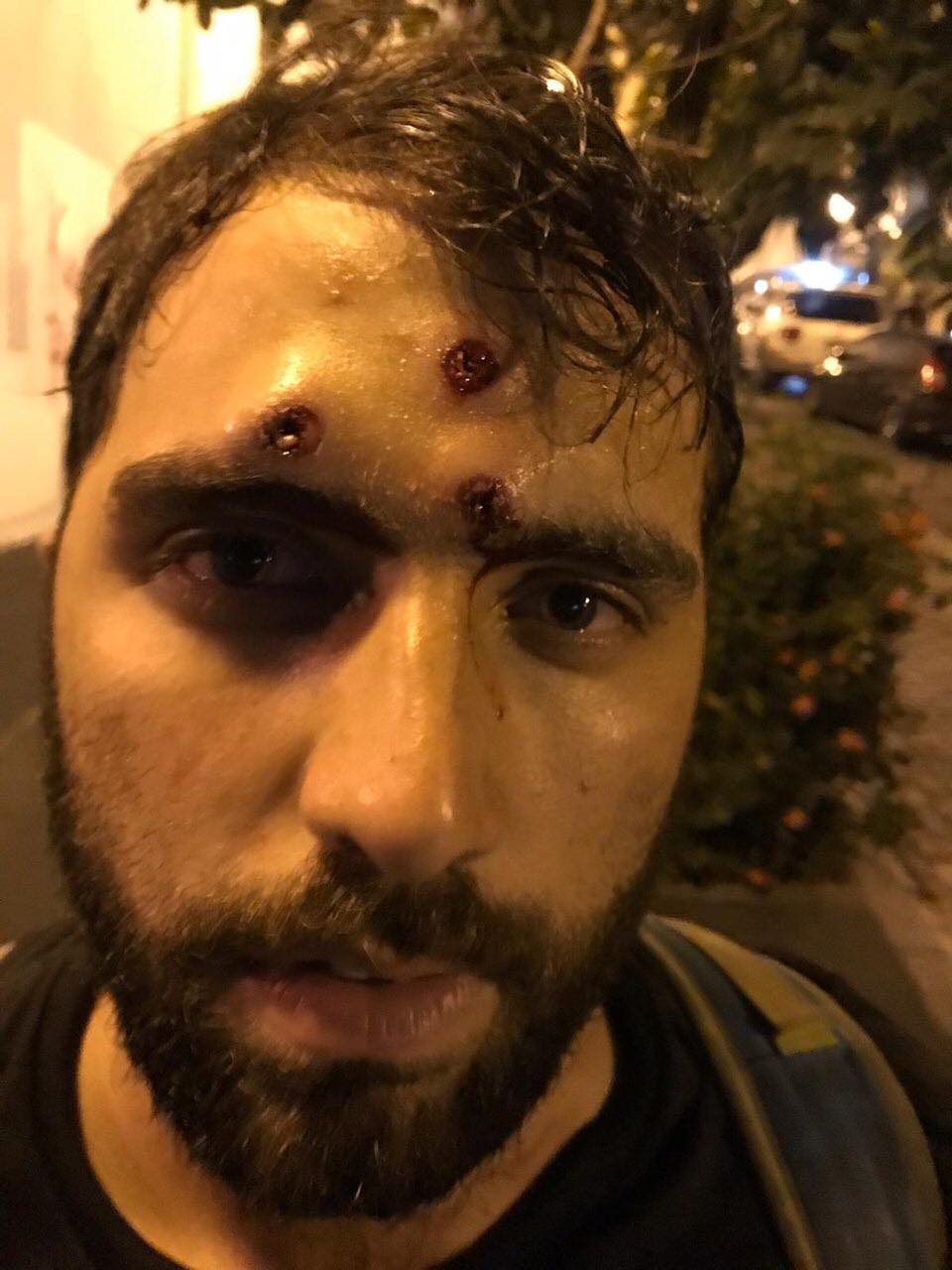 Making the situation even more dangerous, police have been blocking streets during rallies, making it difficult or impossible for protesters to obey orders to leave. This is especially hazardous when the police launch tear gas into a crowd—something they have been unapologetic about. In response to the common chant used by demonstrators, “¡Somos más y no tenemos miedo!” (we are more, and we are fearless), an officer posted a selfie of a group of riot police wearing masks with the boast “la calle linpiecita [sic] y eso que eran más y no tenían miedo se les olvido que nosotros somos menos pero tenemos mucho gas” (“[look at] the street now so clean [of people] they said they were more and had no fear but forgot that we are not so many but we have lots of [tear] gas”).

The police commissioner, Henry Escalera, told the media that the police attacked crowds only in response to protesters who threw tear-gas canisters and fireworks. While demonstrators have mostly been peaceful, a few have thrown objects at the police. But video footage shows police officers trying to pull unarmed protesters inside the perimeter where they would be vulnerable to attack, and tear gas being deployed every night at 11, regardless of demonstrators’ behavior. And those canisters that were supposed to prove protester violence? They were the same brand and type used by the riot police. Escalera’s other attempts to pin violent actions on the protesters have also been discredited. For instance, police initially accused demonstrators of setting alight a car that was seen burning in several videos; police now admit that a canister they launched sparked the fire.

This kind of police behavior is cause for indignation, but Mari-Narváez said it’s not surprising: “The police in Puerto Rico have a history of extreme repression of dissent. Our ‘law and order’ institutions have historically killed, persecuted, incarcerated, and blacklisted dissidents, particularly anti-colonialists and pro-independence activists, and there’s a lack of independent oversight and accountability mechanisms to keep the police in check. The right to free expression is particularly important, since we are currently democratically cornered, subject to another country’s congressional power and with civil rights violations cases halted in courts due to the debt restructuring process.” 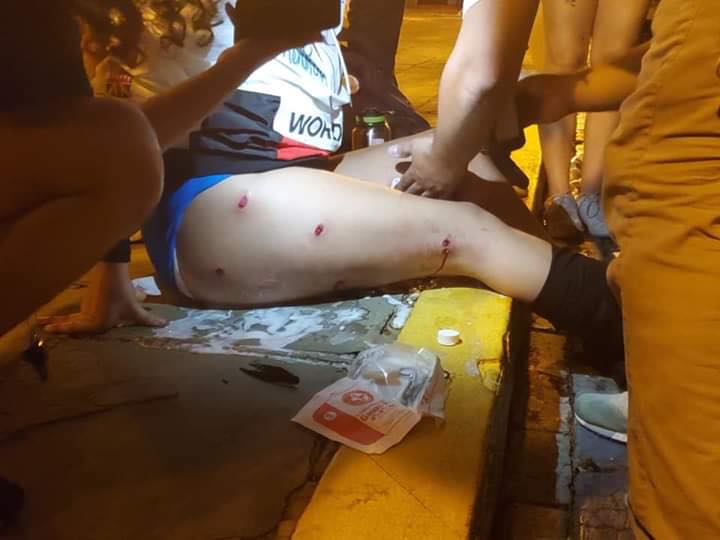 In other words, the imposition of austerity is not only affecting pensions or institutions like health and education; it’s also preventing Puerto Ricans from seeking recourse for police violence.

Puerto Rico is currently in the middle of the fraught process of installing an interim government. Moving forward, given the evidence of recent police repression of free speech rights and the history of police abuses, it is critical that mechanisms to monitor abuse and keep police accountable are put in place. According to Erika Guevara, director for the Americas for Amnesty International, “The new authorities in Puerto Rico must prioritize the investigation of the police response to the recent protests and take all measures to fully guarantee the right to freedom of expression. Never again must the authorities repress social protest.”

Investigating these and other cases will not be easy within existing structures, and turning to the FBI for help is hardly a good alternative. The FBI has historically collaborated with the Puerto Rico Police Department in the abuse and persecution of dissidents and even helped shape some of its most appalling practices. “The chat itself,” said Marisol Lebrón, scholar and author of Policing Life and Death: Race, Violence, and Resistance in Puerto Rico, “reveals that for the past five years, the federal government did not work with the local authorities or the appointed federal monitor to address police repression or stop human rights abuses. I would be very suspicious of their motivations if they start doing so now.”

Mari-Narváez agrees, and suggests some mechanisms: an independent oversight board with citizen participation and funded by but independent from the state; the appointment of an independent special prosecutor; and better police training. One thing is clear, though: Roselló may have resigned, but the protests are not stopping. And unless something is done, neither will the police abuse.