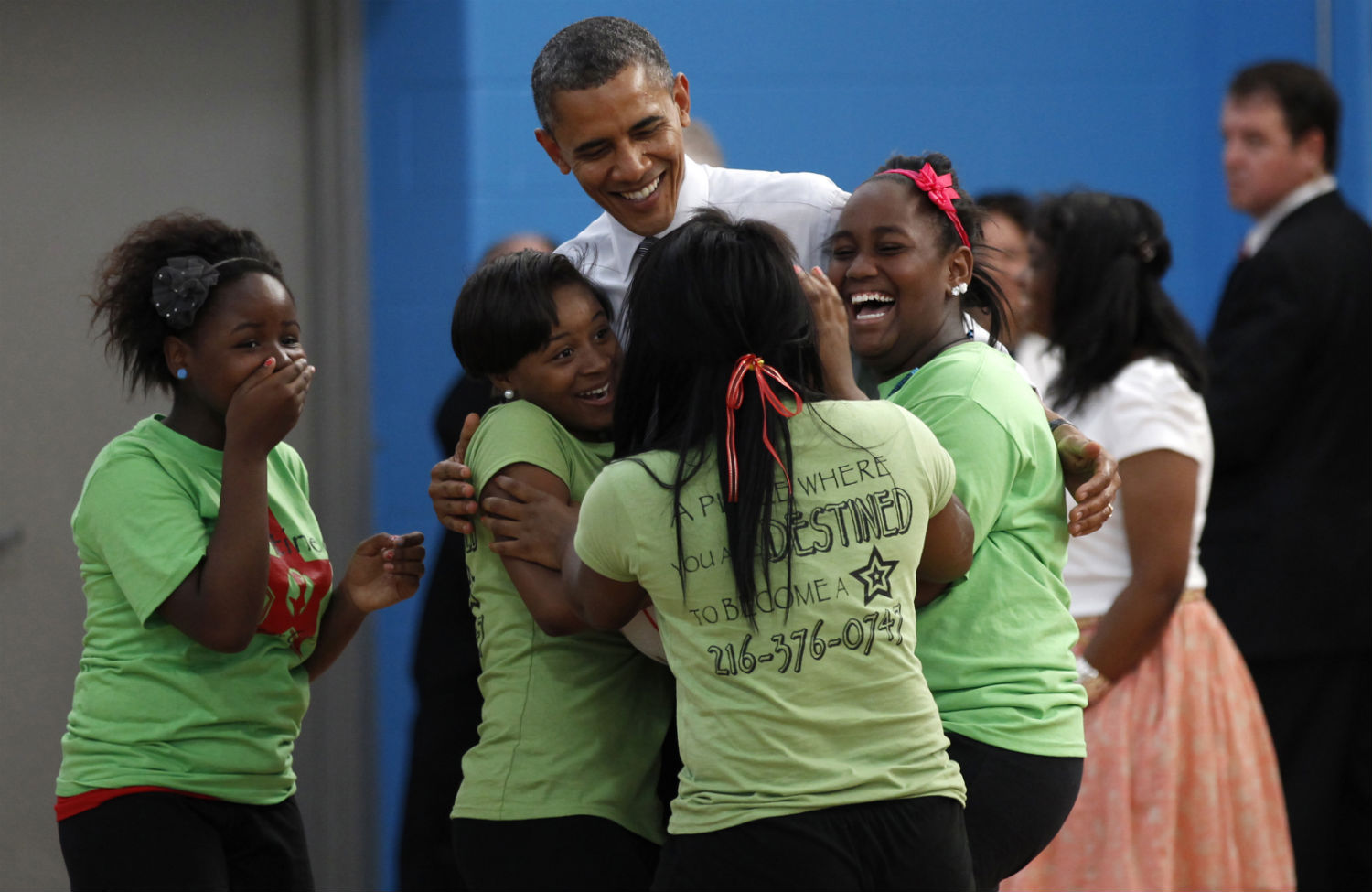 Girls embrace President Obama during a 2012 visit to the Boys and Girls Club of Cleveland. (Reuters/Kevin Lamarque)

Late last week, President Obama announced that the White House is launching a $200 million, five-year initiative focused on improving the opportunities of black and Latino boys and young men. For at least five years, advocates who work within civil rights and racial justice non-profit organizations have known that strategies that address the needs of boys and men of color—from fighting stop-and-frisk in New York City, to closing the educational achievement gap in California—are a hot ticket. A 2006 New York Times front-page article headlined “Plight Deepens for Black Men, Studies Warn” highlighted the work of academics who found that black men, in particular, were falling behind economically, and “ignited a conversation” at the Open Society Foundation about investing specifically in them. The approach spread, and other funders ramped up investment in this area. For the president’s initiative, major philanthropic foundations including Ford, Open Society and Kellogg will be footing the bill with help from business leaders (there are no public funds dedicated to the project).

Now that the concept has moved from the non-profit world to presidential policy, it’s impossible to keep ignoring the obvious question: where do girls and young women fit in? If streets corners, classrooms, workplaces and court systems are inhospitable to and dangerous for black and Latino boys and men, how do they affect the girls and women who are often right by their sides? After all, boys and men don’t exist in a vacuum.

In fact, black and Latina girls and women also struggle to succeed in school, avoid the criminal justice system, and find and keep good jobs. Nearly 40 percent of black and Latina girls fail to graduate high school on time. Black girls experience sexual violence at rates higher than their white and Latina counterparts, and black women are murdered by men at more than two and a half times the rate of white women. Of those black women killed by men in 2011, nearly half were intimate partners of the offenders. This is perhaps not the kind of violence Obama’s initiative is drawing attention to, but it’s violence just the same.

In recent years, researcher Monique Morris has been trying to make sure girls—especially black girls—are included in conversations about racial disparities in education and the criminal justice system. Black girls make up just over a third of girls in juvenile detention, according to her 2012 paper titled “Race, Gender and the School-to-Prison Pipeline.” She reports that “among the nation’s 10 highest suspending districts, Black girls with one or more disability experienced the highest suspension rate of all girls.” Disproportionate discipline in and removal from classrooms often means an increased chance of contact with police, the courts and jail.

Black girls are often seen as threatening or disruptive in the classroom just as their male counterparts are, but for different reasons. Teachers and administrators clash with and discipline girls they perceive to be loud, defiant and unladylike, according to Morris. “When Black girls do engage in acts that are deemed ‘ghetto’ or a deviation from the social norms that define female behavior according to a narrow, White middle-class definition of femininity, they are deemed nonconformative and thereby subject to criminalizing responses,” Morris writes. She offers the example of two 6-year-old black girls—one in Georgia, the other in Florida—who were handcuffed and led away by police after throwing tantrums in their classrooms. We’re used to discussing how black and Latino boys are perceived as a threat to authority figures. Less often explored is the implicit bias faced by black and Latina girls.

The harsh discipline continues as these girls reach adulthood. In the past thirty years, women have entered US prisons at nearly double the rate of men, with the female population behind bars growing by more than 800 percent, according to the Center for American Progress (CAP). Racial disparities exist for the female prisoner population, too. Black women are three times more likely than white women to be incarcerated and Latina women are nearly 70 percent more likely.

The president’s initiative promises to create economic opportunities for boys and young men, and girls and young women could use a hand in this arena as well. A study of black unemployment found that black teenage boys and girls experienced similar rates of joblessness during 2011—a low of 35 percent for black girls and 39 percent for black boys and a high of 48 percent for both. The same UC Berkeley Labor Center study found that between 2009 and 2011, the unemployment rate declined slightly for black men but joblessness actually increased for black women. Unemployment rates fell for both white men and white women during this time.

Fewer opportunities for work spells trouble for the segment of the population that’s long struggled to build assets. Just look at median household wealth broken down by race and gender. According to CAP, single black and Latina women have $100 and $120 respectively in median household wealth, compared to single black men at $7,900, single white women at $41,500, and single white men at $43,800. Add children to the mix and the median wealth of black and Latina single mothers drops to $0.

By outlining challenges facing black and Latina girls and women, I don’t intend to play into some kind of intraracial oppression Olympics, in which we pretend that boys and men aren’t suffering or argue that this public-private partnership should do nothing for anyone if it can’t do something for everyone. But these statistics should raise questions about the case made in the 2006 Times article. At the time, experts argued that poor black women had already gotten a hand up through welfare reform, the new enforcement of child support obligations and a booming economy in the ’90s. Girls’ and women’s ongoing uphill battles against poverty and criminalization should also make us question why, as the African American Policy Forum reports, the philanthropic world has invested $100 million in initiatives targeting black and Latino boys over the last decade but less than $1 million targeting girls and women in those same racial and ethnic groups.

These are some of the issues that need to be addressed as $200 million more foundation dollars and the force of the White House get involved. Reinvigorating the conversation offers a new opportunity to be explicit about where girls and women fit. And if the answer is—as it seems to be—that we don’t, it’s time to start talking about why.