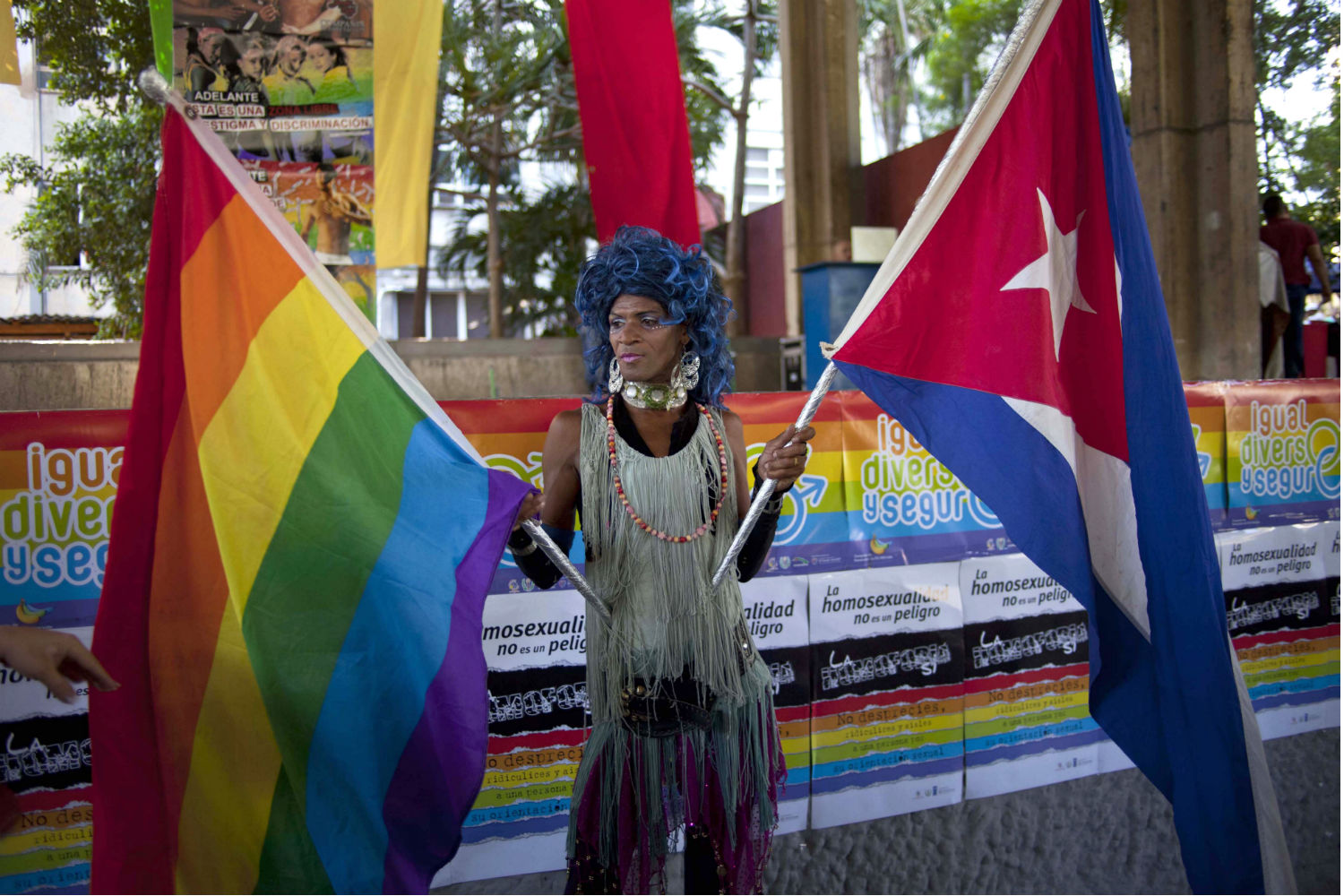 In this year of anniversaries, this summer of rainbow flags flying in commemoration of what happened one steamy night outside a bar in Greenwich Village, we can pretend the politics of liberation can be tracked along clear lines marked Revolution, Betrayal, Progress, Mainstreaming; or we can remember that history is like desire. Complicated, socially shaped, alive in the creation and re-creation of the now.

Oh my! So many people say they were outside the Stonewall Inn the night of June 28, 1969, that anyone might have thrown the first brick at police, and in a sense what propelled that brick was the accumulated rage of not just those present in the streets but everyone whose experience of oppression made defiance inevitable. Twenty years ago in this magazine, a quarter-century after Stonewall, Andrew Kopkind wrote:

Somewhere in the existential depths of that brawl of screaming transvestites were all the freedom rides, the anti-war marches, the sit-ins, the smoke-ins, the be-ins, the consciousness-raising, the bra-burning, the levitation of the Pentagon, the endless meetings and broken hearts. Not only that, but the years of gay men and lesbians locking themselves inside windowless, unnamed bars; writing dangerous, anonymous novels and articles; lying about their identity to their families, their bosses, the military; suffering silently when they were found out; hiding and seeking and winking at each other, or drinking and dying by themselves. And sometimes, not often, braving it out and surviving.

There is not a more exquisite evocation of historical authorship.

Riots and storytelling being what they are, of course, someone is credited with throwing the first brick, and whether she did the deed or not, Sylvia Rivera symbolized the front lines that night and the battles ahead at home and abroad. Born Ray Rivera of a Venezuelan woman and a man of Puerto Rican descent, she left the violence of home at 11 to be schooled in New York’s streets. As Martin Duberman wrote, “Sylvia was from the wrong ethnic group, from the wrong side of the tracks, wearing the wrong clothes—managing single-handedly and simultaneously to embody several frightening, overlapping categories of Otherness.” With her friend Marsha P. Johnson, a black drag queen and cult artist, she became the fierce godmother of flaming creatures, impoverished young queers and trans people—the many-hued, multilingual, variantly presenting sea of humanity whose surge into the Village streets and down to the docks after every Pride parade asserts the permanent rebellion.

“There’s a price to pay for visibility.” Marsha P. Johnson was found floating near the Hudson piers in July of 1992. Her friends insisted it wasn’t suicide, for twenty years, until the NYPD finally opened a homicide investigation, as yet unresolved.

The observation about the price might have come from any country’s sexual dissident, but it was made by an Egyptian exile, Ashraf Zanati, in Dangerous Living, a 2003 film by John Scagliotti about the global sweep of the movement to love freely and live authentically. Adnan Ali of Pakistan put it more starkly: “Visibility brings the bullet.”

In Cuba it appears now to bring the opposite: the passionate embrace of the state. The president’s daughter, Mariela Castro Espín, and her National Center for Sexual Education, or CENESEX, have shown such enthusiasm for drag queens, such propensity for mounting extravaganzas under the banner “Diversity is the norm,” such verve to rectify past damage, that her admirers abroad risk full-on enlistment in the Great (Straight) Woman view of history.

This is not to pooh-pooh the younger Castro. In struggle, the state matters, and a Mama Bear hug beats a bullet, or a labor camp. A decade before Stonewall, as street hustlers in Los Angeles pelted police with doughnuts and coffee cups in the Cooper’s Donuts clash, the Cuban Revolution identified homosexuals as “criminal figures,” spawn of bourgeois decadence—though the revolutionaries themselves enforced the decadent 1938 Public Ostentation Law until 1979. Many forces shaped Cuba’s sexual evolution: the migration of relatively liberal East German theories of sexuality into textbooks, and the ineffable blowing in the wind from a counterculture ninety miles offshore; international criticism and brave internal sex rebels; the survival economy and people’s consequent restyling of family and sex roles; the long battle of images with the United States; and now, the need to tout Cuba as a modern state for the global investor class.

Castro and CENESEX have created gay spaces, hired trans women to be AIDS-prevention workers, convinced the Ministry of Public Health to finance gender-reassignment surgery, and had sexual orientation included as a protected category in labor law (though lost, to great dismay, on sexual identity). They talk “diversity” with such authority that they have roiled a debate among Cuba’s diverse others.

Where, some ask, are the lesbians? CENESEX has programs, increasingly improved, for queer women, but the butch tuercas and bomberitos (literally, “little firemen”) and others who stray from feminine norms vanish in the whirl of square jaws, jutting breasts and masculine femme. What does it mean to put the norm in diversity? “In a way, the CENESEX has become a gender factory that obliterates the trans’ subversive character,” Cuban historian Abel Sierra Madero recently remarked to Frances Negrón-Muntaner of Columbia University’s Center for the Study of Ethnicity and Race. “A few years ago, this institution hired designers, hairdressers and makeup artists in order to teach transvestites, transgenders and transsexuals how to walk, dress, talk, or use cutlery according to established social norms and in view of their future as women.” Is there a new price for ostentation?

Tongues untied. “Drapetomania” was the name a Louisiana doctor gave to a malady he observed among slaves with a compulsion to freedom. The “symptom” of running, unruliness, wildness, what rebel slaves later claimed as cimarronage, became a symbol of Caribbean identity. “Drapetomania” is the title that curator Alejandro de la Fuente gave to an exhibition honoring Grupo Antillano (1978–83), an Afro-Cuban arts collective that emphasized “self-liberation” by emphasizing African influences as fundamental to the Cuban nation. Here again is freedom inseparable from the body, acknowledged and unchained. The brochure features a painting by Manuel Couceiro, a magic forest of low-hanging breasts and bananas, slots and horns, vines entwined, poofs and pineapples and the peering eyes of half-animals.

A black, deeply incarnational movement in visual arts, theater, music and theory, Grupo Antillano was praised as “the voice of a new art” in 1980—and then forgotten as the kultura looked west, its existence erased in prominent histories of Cuban art.

The 8th Floor in New York, where the show came from Cuba before going on to San Francisco and Harvard, had postcard pictures of Grupo members at a dinner party: alive in the moment, individuals and comrades. Somewhere today there must be a photo of autonomous Cuban sexual liberationists, vitally together.

The genie is out of the bottle. Self-organization of nonconformists, Mariela has said, “could lead to an episode of self-segregation, isolation and not of greater social connection and naturalization of their sexual condition within society.” But in small cafes and day conferences, in shared writings and on the margins of the hip-hop scene, in pop-up kiss-ins or get-togethers called Motivito LGBTQA, Afrofeminists and queer activists, many from the poor margins of Havana, are planting the grassroots; challenging the norms of gender, race, class, “diversity”; advancing an idea of Cubanidad that is expansive, unsettled and unsilenced.

Here in miniature is the dialectic of liberation. Here is humanity, again, pushing history toward the light, or trying to.