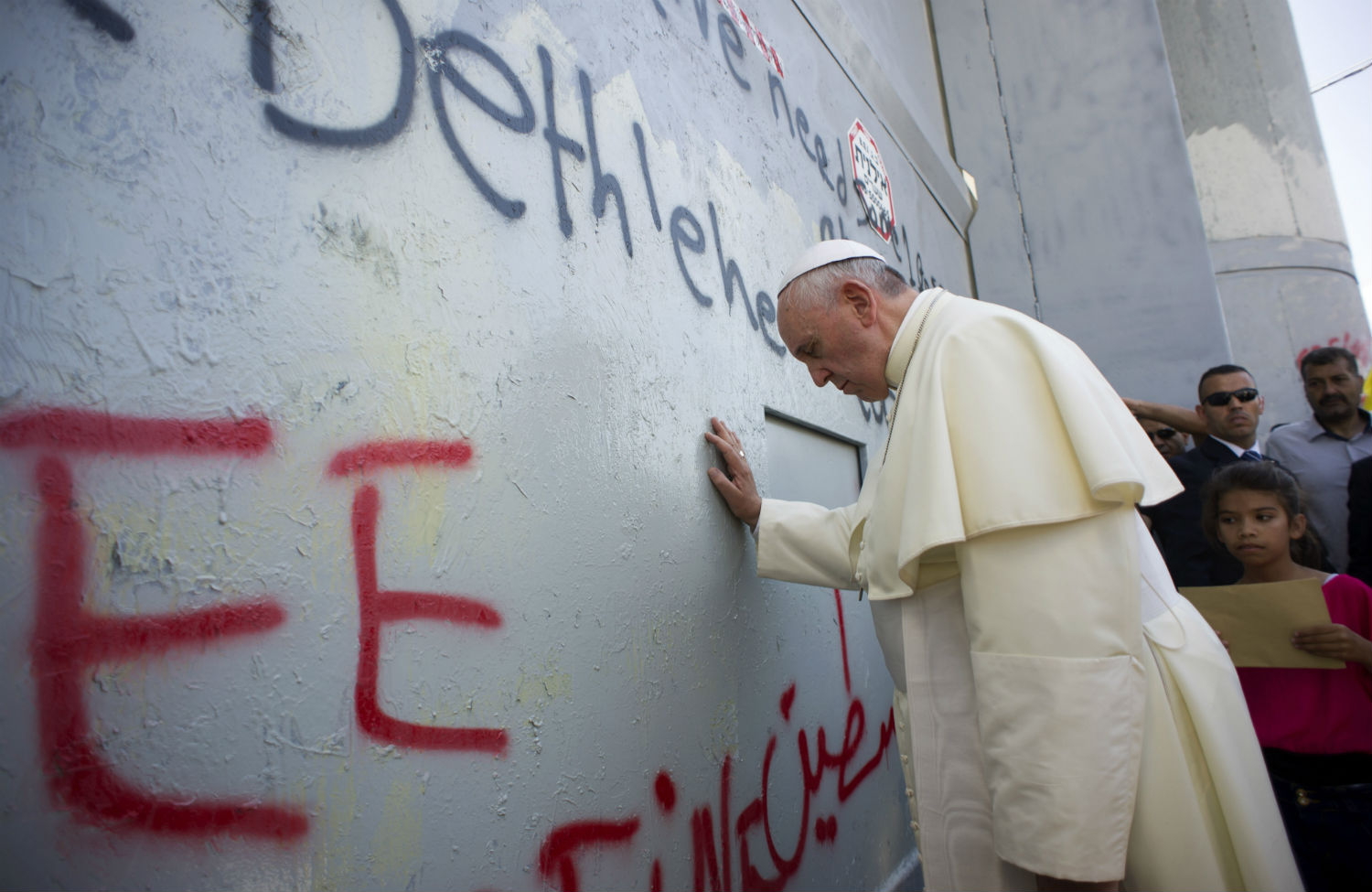 There were plenty of important statements from Pope Francis during his recent three-day trip to Palestine and Israel—including a plea for “justice,” a traditional call for peace and a reference to the “State of Palestine”—but at the end of the day it was all about the photo-ops.

The pope’s visit was carefully orchestrated—shaped not only by security concerns but by his insistence on avoiding Israeli checkpoints. American and other official visitors often work diligently to avoid having to see—or be photographed seeing—the hundreds of Israeli checkpoints or the apartheid wall that snakes through the West Bank, separating Palestinians from their land and dividing the area into tiny, noncontiguous pieces of territory.

But Pope Francis’ complicated logistics were not aimed at pretending not to see but at refusing to acknowledge Israeli power and control over the Palestinian territories. Instead of crossing into the West Bank through the Israeli military–controlled Allenby Bridge, for example, his helicopter flew directly from Jordan to Bethlehem, in the West Bank. He said mass at Manger Square, but what got all the international attention were his meetings with Palestinian refugees, his visit with kids at the Dheisheh refugee camp and his unexpected invitation to Palestinian Authority President Mahmoud Abbas and Israeli President Shimon Peres for a “prayer summit meeting” at the Vatican.

But by far the most lasting image of the trip was the popemobile’s seemingly unscripted halt in Bethlehem. For days, Bethlehem’s kids had fought a running battle with Israeli troops—not with stones, but with spray paint. Each day, the troops whitewashed the graffiti that covers the apartheid wall, which in that area separates Bethlehem from Jerusalem. Each night, the Palestinian kids would return to recreate their art.

This time, the kids won. When the pope drove by, he read “Apartheid Wall” and “Bethlehem is like the Warsaw Ghetto” on the twenty-four-foot-high cement panels that make up the wall. He got out, walked to the wall, leaned his face against it and prayed. The photo, splashed across the front pages of The New York Times, The Washington Post and probably most of the daily newspapers in the world, remains the main take-away of the papal visit.

Not surprisingly, Israel tried to “balance” the pope’s trip, insisting on visits to the Yad Vashem Holocaust museum and the memorial to Israeli victims of terrorism. But, as Palestinian lawyer and longtime analyst Diana Buttu pointed out in The New York Times, those sites are monuments to Israel’s past, which diplomatic protocol requires every official visitor to visit. The apartheid wall, on the other hand, “is ongoing, something that Palestinians live with every day,” she said. “I think he really displayed compassion in visiting the wall and really understanding what people are living under.”

The one part of the pope’s Israeli itinerary that stood out was the requisite visit and wreath-laying at the grave of Theodor Herzl, the late-nineteenth-century founder of modern Zionism credited with the idea of creating a separate state for European Jews. What if the pope’s advisers had provided him with some of Herzl’s own language to cite?

Perhaps a line or two from Herzl’s letters to the infamous British colonialist Cecil Rhodes, who conquered much of Africa for the British crown, might have been appropriate. “You are being invited to help make history,” Herzl wrote to Rhodes. “It doesn’t involve Africa, but a piece of Asia Minor; not Englishmen but Jews.… How, then, do I happen to turn to you since this is an out-of-the-way matter for you? How indeed? Because it is something colonial.… I want you to…put the stamp of your authority on the Zionist plan.”