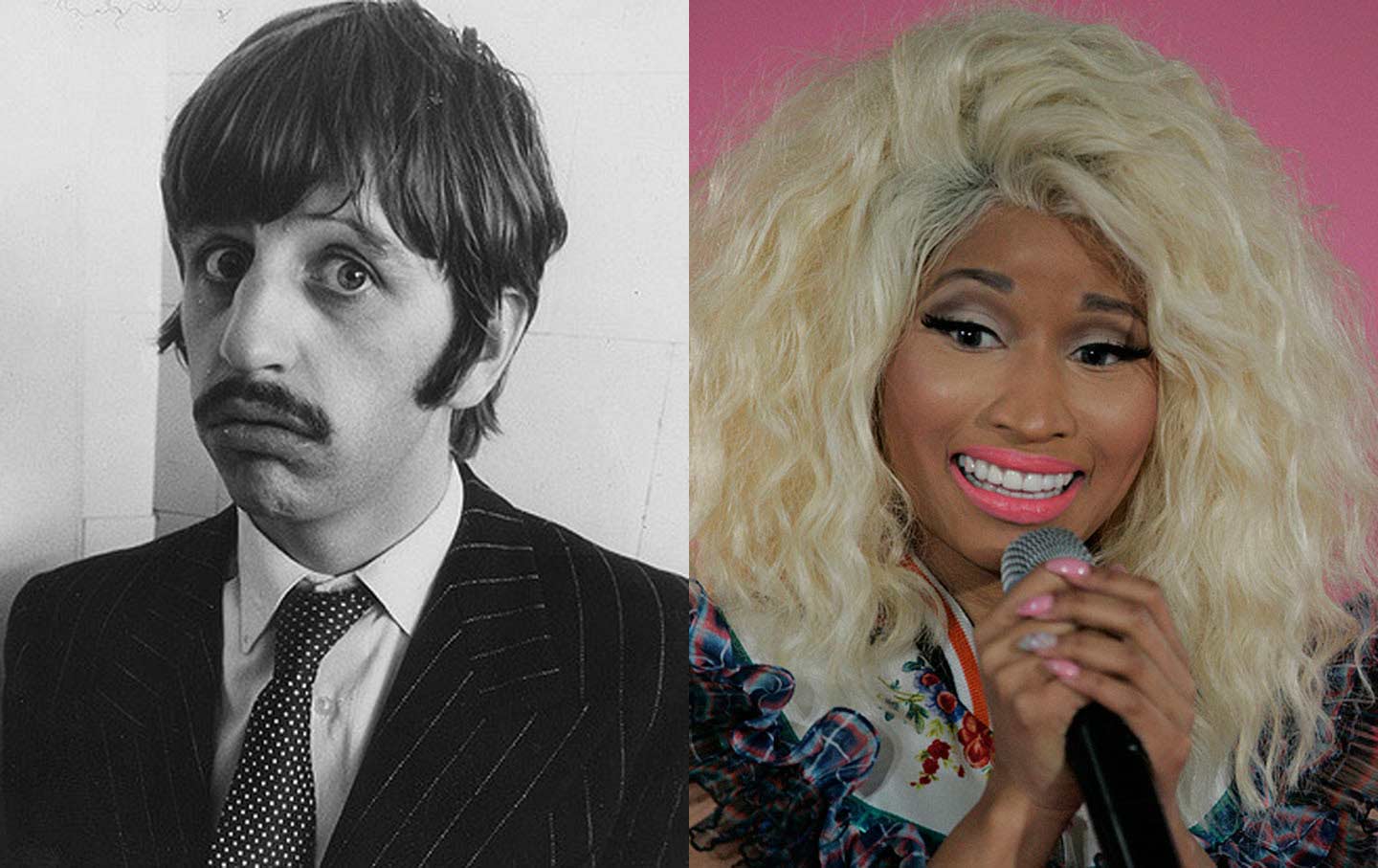 We could thank Ringo Starr for the gender-neutral restroom. Not that the growing public consciousness of gender fluidity is the culmination of a master plan by the ever-lackadaisical Beatles drummer. Ringo and his fellow mop tops surely had no scheme grander than that of becoming famous for their fabness when they upended the prevailing conventions of sexual identity in the heyday of Beatlemania. But upend them, they did.

David Hajdu’s new book, Love for Sale: Pop Music in America, will be published by FSG in October. This essay is drawn in part from the book.

In doing so, the Beatles were blithely carrying on one of the most durable but under-appreciated traditions in popular music: the stretching of young minds with defiantly titillating new ideas that sometimes lead, over time, to social change. It is a tradition that dates as far back as the time of the fox trot and has continued to the contemporary era of Nicki Minaj.

It is 50 years ago now since the Beatles marked the end of the hysterical early phase of their career by giving up the live performances that serve as the subject of the new documentary The Beatles: Eight Days a Week—The Touring Years, directed by Ron Howard and viewable on Hulu after a token run in movie theaters. Among the many moments in the film that make vivid the thrilling weirdness of the Beatles in their day is a scene at the Hollywood Bowl in 1964. Paul McCartney announces that the next song in the concert will be a hit by the Shirelles called “Boys,” sung by Ringo.

As everyone knew in 1964, the Shirelles were a “girl group” that specialized in songs of adolescent infatuation with young males—boys as bundles of joy whose kiss on the lips provides a thrill to the fingertips. The idea of a male singing the song was outrageously strange, but fit in the Beatle’s package of mixed-up sexual messages. The band was invariably described in the press as “feminine” or “girlish”; Elvis Presley, after seeing the Beatles on television, said he thought they “looked like a bunch of faggots.” From their shocking hairdo of bangs to their falsetto singing, with two sets of lips inches apart at a shared microphone, the Beatles embodied a gleeful androgyny that established a new set of possibilities for pop stars and their public.

The fact that the Beatles were transgressors is hard to conceive now is a testament to its legacy, with decades of pop, rock, and hip-hop stars, from Mick Jagger and David Bowie to Lady Gaga and Jessie J going further and further to subvert and redefine the standards of pop sexuality. Song by song, concert by concert, video by video, they have defied all the codes of sexual normalcy and helped normalize the values of sexual defiance.

As it always has, popular music still works today as a for-profit laboratory of social and aesthetic experimentation, a place where young people can take up and try out notions that challenge the ideas dear to their parents. Just as the fox trot helped break down barriers of Victorian propriety, putting strangers in each other’s arms, and just as early rock ’n’ roll advanced an exultant image of integration during the rise of the civil-rights movement, contemporary pop has been playing a part in the much-talked-about transformation of social and sexual habits of young—and ever-younger—people.

A great deal of pop music has always been fixed on sex…. There are a couple of differences today, though.

The pop hits of the early 21st century are the soundtrack of the hook-up culture, in which sex has a different place in social life (or in the way social life is generally conceived) than it had in the past. Instead of dating in hopes of growing close and, before too long, having sex, strangers meet and have sex and, over time, maybe grow closer and maybe not, rarely going on old-style dates till they’re committed in exclusive relationships. That’s the sexual paradigm of the pop-music world of my teenage son’s generation. It’s explicit in songs like “TiK ToK” by Ke$ha, which opens with the singer waking up in a stranger’s place and brushing her teeth with Jack Daniels; “Drunk in Love,” by Beyoncé, which has her waking up in a kitchen and asking, “How did the hell did this shit happen?”; and “Sex in the Lounge,” by Nicki Minaj, which is about what it says.

Of course, a great deal of popular music has always been fixed on sex, if only by association with romance or in coded language about dancing. There are a couple of differences today, though: one, the high quotient of songs glorying in sex without romance, relative to the number of more traditional love songs; another, the widespread portrayal of sex partners as interchangeable parts in a scheme of endless, unfixed possibilities. Any night out could lead to any number of hook-ups, perhaps all at once. It was a savvy act of branding for Onika “Nicki” Maraj to change her last name to a word for group sex. Ménages à trois are referred to in more than a dozen songs on the pop charts since the turn of the century, including a number-one hit by Katy Perry, “Last Friday Night (T.G.I.F.),” released on a 2010 album titled Teenage Dream.

With this in mind, it seems plausible that not only the prominence of sex in contemporary pop but also the fluidity of sexual partnership in the music could influence young listeners in ways hard to conceive of now. Some futurists, speculating about the next frontier in civil rights, have talked about the prospect of growing acceptance of polyamory, the having of relationships among three or more people. The idea is difficult for me to accept, since it’s something I associate mainly with bigamy and porn. My teenage son and his friends, having grown up with a star named Minaj and after hearing “Last Friday Night (T.G.I.F.)” hundreds of times, could come to have a different point of view some day. I’m not predicting or lobbying for any such thing, and I know the future is unknowable. But I’ve learned that popular music, being an art designed to help young people feel different from people older than they, has a long tradition of inciting its audience to defy grown-ups like me.

David Hajdu’s new book, Love for Sale: Pop Music in America, will be published this month.  This essay is drawn in part from the book.