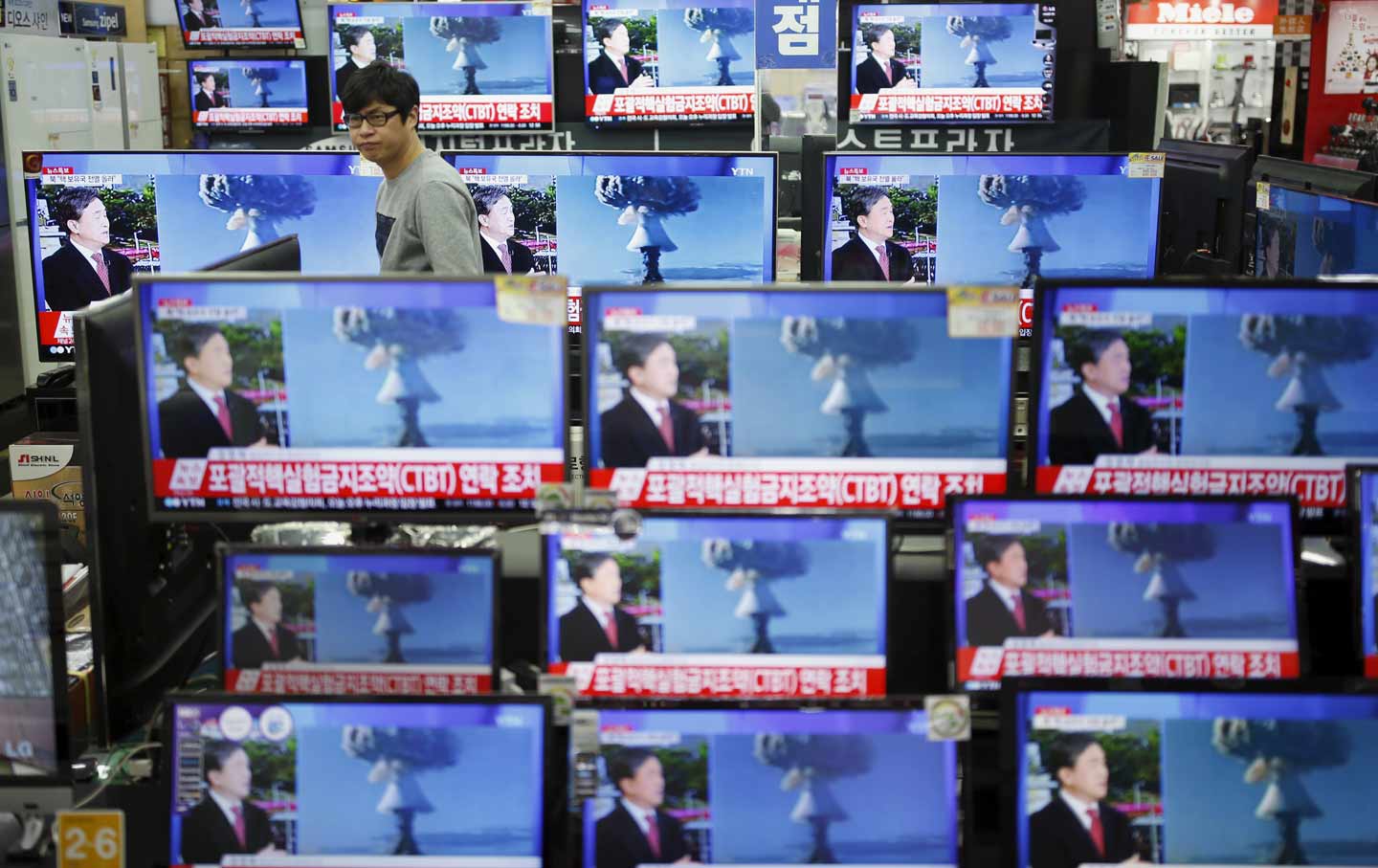 By their purported test of a hydrogen bomb early in 2016, North Korea reminded the world that nuclear dangers are not an abstraction, but a continuing menace that the governments and peoples of the world ignore at their peril. Even if the test were not of a hydrogen bomb but of a smaller atomic weapon, as many experts suggest, we are still reminded that we live in the Nuclear Age, an age in which accident, miscalculation, insanity, or intention could lead to devastating nuclear catastrophe.

What is most notable about the Nuclear Age is that we humans, by our scientific and technological ingenuity, have created the means of our own demise. The world currently is confronted by many threats to human well-being, and even civilizational survival, but we focus here on the particular grave dangers posed by nuclear weapons and nuclear war.

Even a relatively small nuclear exchange between India and Pakistan, with each country using 50 Hiroshima-size nuclear weapons against the other side’s cities, could result in a nuclear famine, killing some 2 billion of the most vulnerable people on the planet. A nuclear war between the United States and Russia could destroy civilization in a single afternoon and send temperatures on Earth plummeting into a new ice age. Such a war could destroy most complex life on the planet. Despite the gravity of such threats, they are being ignored, which is morally reprehensible and politically irresponsible.

None of the presidential candidates have challenged the plans to spend $1 trillion to modernize the US arsenal.

We in the United States are in the midst of hotly contested campaigns to determine the candidates of both major political parties in the 2016 presidential faceoff, and yet none of the frontrunners for the nominations have even voiced concern about the nuclear war dangers we face. This is an appalling oversight. It reflects the underlying situation of denial and complacency that disconnects the American people as a whole from the risks of use of nuclear weapons in the years ahead. This menacing disconnect is reinforced by the media, which have failed to challenge the candidates on their approach to this apocalyptic weaponry during the debates and have ignored the issue in their television and print coverage, even to the extent of excluding voices that express concern from their opinion pages. We regard it as a matter of urgency to put these issues back on the radar screen of public awareness.

We are appalled that none of the candidates running for the highest office in the land have yet put forward any plan or strategy to end current threats of nuclear annihilation, that none have challenged the planned expenditure of $1 trillion to modernize the US nuclear arsenal, and that none have made a point of the United States being in breach of its nuclear disarmament obligations under the Nuclear Non-Proliferation Treaty. In the presidential debates it has been a non-issue, which scandalizes the candidates for not raising the issue in their many public speeches and the media for not challenging them for failing to do so. As a society, we are out of touch with the most frightening—yet after decades still dangerously mishandled—challenge to the future of humanity.

There are nine countries that currently possess nuclear weapons. Five of these nuclear-armed countries are parties to the Nuclear Non-Proliferation Treaty (the United States, Russia, the United Kingdom, France, and China), and are obligated by that treaty to negotiate in good faith for a cessation of the nuclear arms race and for nuclear disarmament. The other four nuclear-armed countries (Israel, India, Pakistan, and North Korea) are subject to the same obligations under customary international law. None of the nine nuclear-armed countries have engaged in such negotiations, a reality that should be met with anger and frustration, and not, as is now the case, with indifference. It is not only the United States that is responsible for the current state of denial and indifference. Throughout the world there is a false confidence that, because the Cold War is over and no nuclear weapons have been used since 1945, the nuclear dangers that once frightened and concerned people can now be ignored.

Rather than fulfill their obligations for negotiated nuclear disarmament, the nine nuclear-armed countries all rely upon nuclear deterrence and are engaged in modernization programs that will keep their nuclear arsenals active through the 21st century and perhaps beyond. Unfortunately, nuclear deterrence does not actually provide security to countries with nuclear arsenals. Rather, it is a hypothesis about human behavior, which is unlikely to hold up over time. Nuclear deterrence has come close to failing on numerous occasions and would clearly be totally ineffective, or worse, against a terrorist group in possession of one or more nuclear weapons that has no fear of retaliation and may actually welcome it. Further, as the world is now embarking on a renewed nuclear arms race, disturbingly reminiscent of the Cold War, rising risks of confrontations and crises between major states possessing nuclear weapons increase the possibility of use.

As citizens of a nuclear-armed country, we are also targets of nuclear weapons. John F. Kennedy saw clearly that “every man, woman and child lives under a nuclear sword of Damocles, hanging by the slenderest of threads, capable of being cut at any moment by accident, or miscalculation, or by madness. The weapons of war must be abolished before they abolish us.” What President Kennedy vividly expressed more than 50 years ago remains true today, and even more so as the weapons proliferate and as extremist groups come closer to acquiring these terrible weapons.

We all must take action if we want to save humanity and other forms of life from nuclear catastrophe.

Those with power and control over nuclear weapons could turn this planet, unique in all the universe in supporting life, into the charred remains of a Global Hiroshima. Should any political leader or government hold so much power? Should we be content to allow such power to rest in any hands at all?

It is time to end the nuclear weapons era. We are living on borrowed time. The United States, as the world’s most powerful country, must play a leadership role in convening negotiations. For the United States to be effective in leading the movement to achieve Nuclear Zero, US citizens must awaken to the need to act and must press our government to act and encourage others elsewhere—especially in the other eight nuclear-armed countries—to press their governments to act as well. It is not enough to be apathetic, conformist, ignorant, or in denial. We all must take action if we want to save humanity and other forms of life from nuclear catastrophe. In this spirit, we are at a stage where we need a robust global solidarity movement that is dedicated to raising awareness of the growing nuclear menace, and the urgent need to act nationally, regionally, and globally to reverse the strong militarist currents that are pushing the world ever closer to the nuclear precipice.

Nuclear weapons are the most immediate threat to humanity, but they are not the only technology that could play and is playing havoc with the future of life. The scale of our technological impact on the environment (primarily fossil-fuel extraction and use) is also resulting in global warming and climate chaos, with predicted rises in ocean levels and many other threats—ocean acidification, extreme weather, climate refugees, and strife from drought—that will cause massive death and displacement of human and animal populations.

In addition to the technological threats to the human future, many people on the planet now suffer from hunger, disease, lack of shelter, and lack of education. Every person on the planet has a right to adequate nutrition, healthcare, housing, and education. It is deeply unjust to allow the rich to grow richer while the vast majority of humanity sinks into deeper poverty. It is immoral to spend our resources on modernizing weapons of mass annihilation while large numbers of people continue to suffer from the ravages of poverty.

Doing all we can to move the world to Nuclear Zero, while remaining responsive to other pressing dangers, is our best chance to ensure a benevolent future for our species and its natural surroundings. We can start by changing apathy to empathy, conformity to critical thinking, ignorance to wisdom, denial to recognition, and thought to action in responding to the threats posed by nuclear weapons and the technologies associated with global warming, as well as to the need to address present human suffering arising from war and poverty.

The richer countries are challenged by migrant flows of millions of desperate people and by the realization that as many as a billion people on the planet are chronically hungry and another 2 billion are malnourished, resulting in widespread growth-stunting among children and other maladies. While ridding the world of nuclear weaponry is our primary goal, we are mindful that the institution of war is responsible for chaos and massive casualties, and that we must also challenge the militarist mentality if we are ever to enjoy enduring peace and security on our planet.

The fate of our species is now being tested as never before. The question before us is whether humankind has the foresight and discipline necessary to forgo some superfluous desires, mainly curtailing propensities for material luxuries and for domination of our fellow beings, thereby enabling all of us and succeeding generations to live lives worth living. Whether our species will rise to this challenge is uncertain, with current evidence not reassuring.

The time is short, and what is at risk is civilization and every small and great thing that each of us loves and treasures on our planet.

The authors are affiliated with the Santa Barbara based Nuclear Age Peace Foundation.