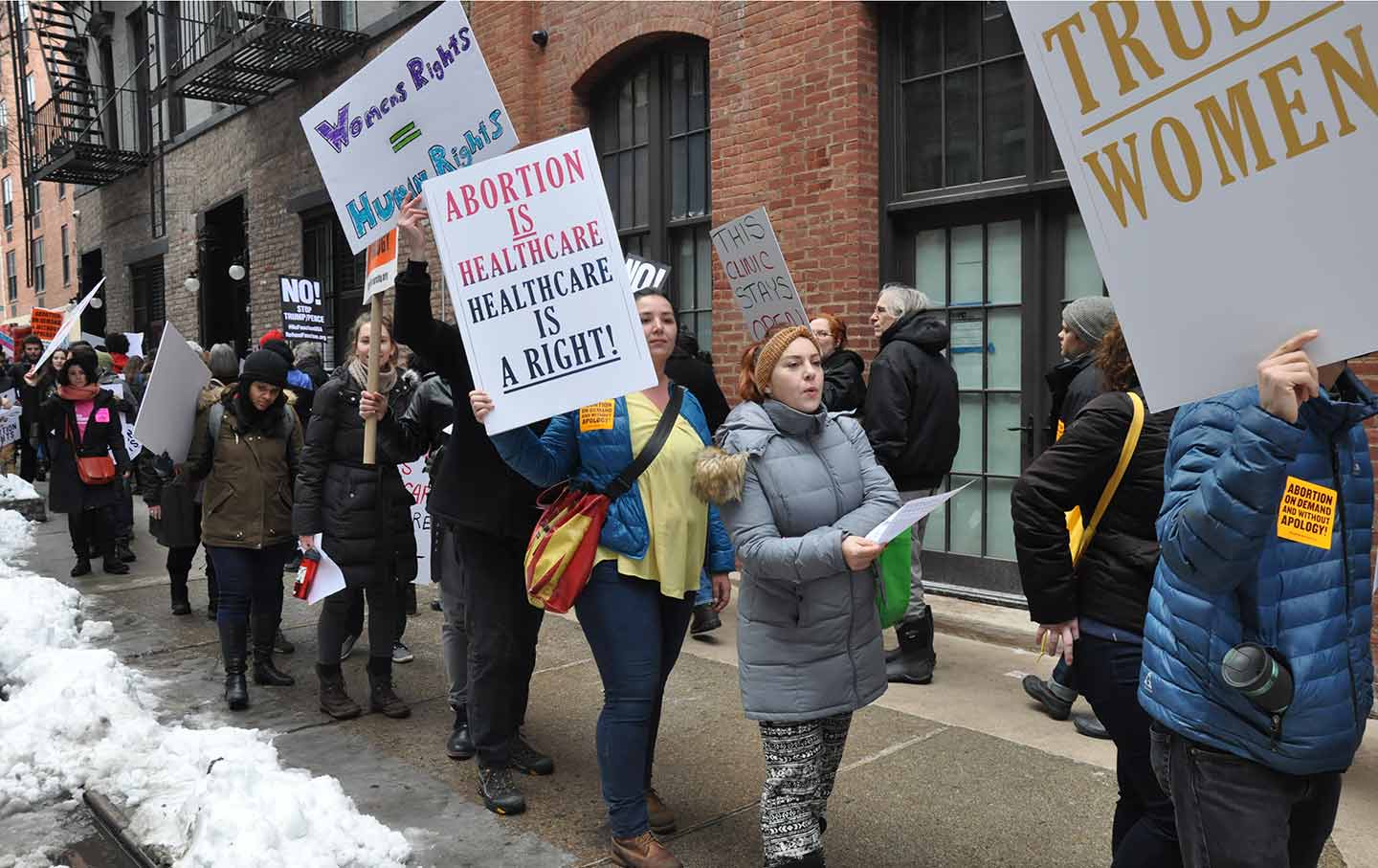 NYC for Abortion Rights counter-protests at a pro-life rally outside a Planned Parenthood clinic in Manhattan on February 11, 2017. (Kendrick Davis)

Last Saturday, two groups gathered outside the Margaret Sanger Health Center, Manhattan’s branch of Planned Parenthood, at the corner of Bleecker and Mott. It was a national day of action organized by ProtestPP, a coalition of over 60 pro-life groups, to demand that the federal government withdraw funding from Planned Parenthood. About 30 abortion opponents showed up. At least ten times as many pro-choice counter-protesters met them onsite. The counter-protesters had signs, marched, and chanted: “Abortion is a human right, not just for the rich and white!”

“We prefer it if they don’t chant,” sighed Christina Chang, vice president of public affairs at Planned Parenthood of New York City, who watched both groups from across the street.

ProtestPP held dozens of rallies around the country, virtually all outside of clinics, but Planned Parenthood requested that pro-choice activists not counter-protest in the same locations, continuing its long-standing policy of “non-engagement.” In New York, it recommended that supporters attend a rally in Washington Square Park instead. While hundreds did just that, the group that chose to counter-protest outside the Manhattan clinic expressed concerned that Planned Parenthood’s “non-engagement” strategy has given abortion opponents tacit permission to dominate the space outside of clinics. Indeed, when I asked Eric Scheidler, executive director of the Pro-Life Action League and one of the national co-directors of ProtestPP, why they chose clinics as the location for their protests, he responded simply, “That’s where our people are used to being.”

According to Anne Rumberger, an organizer of the counter-protest, Planned Parenthood’s policy of non-engagement is a “defeatist strategy.” Between 2011 and 2014, state legislatures enacted a whopping 231 abortion restrictions. In the last six years, 162 abortion providers have closed their doors or stopped offering the procedure. The new presidential administration and the majority party in both houses of Congress are vehemently opposed to reproductive rights and are poised to wage a devastating offensive. If there’s a time to try a different tactic, it might be now.

Chang cited the emotional distress a crowd could cause patients and suggested that some patients might stay home—missing time-sensitive appointments—to avoid protests. “We want to make sure patients don’t get scared,” Chang told me before the action. However, the distinction between intrusive protesters and fragile patients is tenuous. Nearly all counter-protesters I spoke with have been patients at Planned Parenthood. As Jen Roesch, an organizer and patient, put it, “The people most affected aren’t victims. We’re the ones who should be fighting and we’re capable of fighting.”

“I’m showing solidarity with the women who use these services,” said Delicia Jones, a counter-protester and social worker who lives in the Bronx. “These are women from my community, women like me. I respectfully disagree with Planned Parenthood’s decision that this is not a good strategy.”

Jones is a member of the International Socialist Organization, which called an emergency meeting a week before the anti-abortion protests to plan a response. The result was a loose coalition that calls itself NYC for Abortion Rights. They began talks with Planned Parenthood, who, despite their reluctance to have counter-protesters, accommodated them by adding more patient escorts and police officers (a precaution that, as it turned out, was unnecessary—the officers and escorts spent most of the morning leaning against the walls with their arms folded).

The counter-protesters have history on their side. In the early years after Roe v. Wade, clinic defense was relatively common. There are many smaller, independent providers that welcome the practice today. Roesch recalls a defense she attended in Buffalo in 1992 when, after the anti-choice group Operation Rescue successfully shut down a clinic in Wichita, Kansas, it was prevented from doing so in New York. “It was actually a clinic defense. There was no buffer zone back then. We had to link arms and clear a path for patients. We squared off with the antis, there was some physical confrontation, but that’s what it took to keep the clinic open.”

The counter-protest ended with a speak-out, echoing the 1969 Redstockings speak-out, when women first gathered to tell the stories of their then-illegal abortions. One of the women who spoke on Saturday was Denise Romero. “A lot of my friends are Latinas, Muslims, and black working-class women,” she bellowed. The crowd repeated her words, amplifying her voice via human microphone. “For us, reproductive health is not just about choice. It’s about survival.” Her voice cracked. “So I’ll be damned if the right thinks that they can control my already limited access to basic health services.” The crowd cheered. “As an immigrant woman. As an undocumented immigrant woman. As a working-class socialist, I will fight for these services.”

Across the street, a man wearing long robes and a rosary had begun spraying holy water from a small plastic bottle onto the clinic’s brick exterior wall, crossing himself after each squirt.

Romero understands his faith better than most. Her family emigrated from Mexico to Queens when she was 8 years old and her mother is a devout Catholic, though practicing her faith proves more complex than those who spray holy water on the walls of women’s health clinics might admit. The meager wages Romero’s mother earns are not enough to support any more children, so a few years ago Romero accompanied her mother to a women’s health clinic to get a prescription for birth control.

Romero is a full-time student at LaGuardia Community College and a full-time paralegal at MFY Legal Services, which provides free legal counsel to low income New Yorkers. Because of her undocumented status, she is ineligible for financial aid and must pay her entire tuition out of pocket. Romero remembers cutting class while she was a student at Long Island City High School to go to reproductive-health clinics in Queens for her own care and with her friends. “A lot of those experiences were about my friends’ avoiding any more economic hardship or even escaping abusive relationships.” Walking past anti-choice protesters holding blown up images of the surgical abortion process affected her deeply. She participated in her first clinic defense in 2009, when she was 18, and, despite her tight finances, donates to Planned Parenthood every time she can.

Jen Roesch has had two abortions and has two children. “Abortion, child, abortion, child,” she says. This is quite common: Over half of all abortions are obtained by women who already have at least one child, and about half of all US women having an abortion have had one previously. Jen was born the year Roe v. Wade was decided and had her first abortion when she was 19. “I had no health insurance, no partner, I had to cross a line of antis to go in. I was shaking,” she recalls. “But it wasn’t because I was conflicted about having an abortion. It was because I was broke, and didn’t have any means. There were no counter-protesters. I was by myself.” Roesch says she would have welcomed counter-protesters at the clinic when she was 19. “It would have made me feel supported. It would have taken away that sense of personal isolation.”

This isolation doesn’t just affect patients—it affects providers, too. Until two years ago, Kate Castle worked as an abortion counselor at a clinic in Detroit. “Every day I passed protesters that accused me of being a murderer and a criminal.” She, too, would have appreciated a show of solidarity. “Having a counter-protest is important to show clinic staff, abortion providers, and patients that you’re not alone and abortion is OK. Abortion is good.”

Castle now works as a researcher at a reproductive health nonprofit, but misses the clinical work. She volunteers at Planned Parenthood to stay connected to patients, and she is familiar with the array of feelings people experience while getting an abortion. So it strikes her as “paternalistic” to argue that counter-protesters will cause confusion among patients. “Patients can definitely tell who is there to support them and who is not.”

Another woman was more explicit. “My name is Lauren, I had an abortion a year and a half ago. The circumstances don’t really matter. I’m not ashamed. I won’t apologize. And I’d have another one! So fuck those guys. That’s it.”

Around 11 am, when both groups were out in full force, two men walked by in leather jackets. “The numbers of people pretty much tell the story about New York City, thank goodness,” one said to the other.

At noon, after the speak-out, the small group of pro-lifers huddled together and prayed. Then they left. The counter-protesters cheered and sang a rousing chorus of “Hey hey hey, goodbye,” radiating a palpable sense of victory. They squeezed in a final chant: “Planned Parenthood, we love you. Thank you for all you do.”

After the anti-abortion activists packed up and went home, the counter-protesters marched the half-mile to Washington Square Park to join the Planned Parenthood–sanctioned rally. In the end, as Roesch noted, “Everyone who is organizing this supports and values Planned Parenthood. We are on the same side, whatever strategic differences we have.”

The park was packed with people, many of whom sported pink knitted pussy hats from the Women’s March. There was a stage and a professional sound system—easier to hear than the human microphone that the counter-protesters used, but also more expensive—and a roster of impressive speakers, like Eve Ensler, the author of The Vagina Monologues, and Lizz Winstead, co-creator of The Daily Show.

The counter-protesters, NYC for Abortion Rights, will have a follow-up meeting on February 25 to debrief the action and discuss next steps. With a president who campaigned on defunding Planned Parenthood and a Supreme Court nominee who ruled in favor of Hobby Lobby, bold, grassroots action to defend women’s health care is needed now more than ever. Fortunately, activists with NYC for Abortion Rights are considering forming a more permanent group.