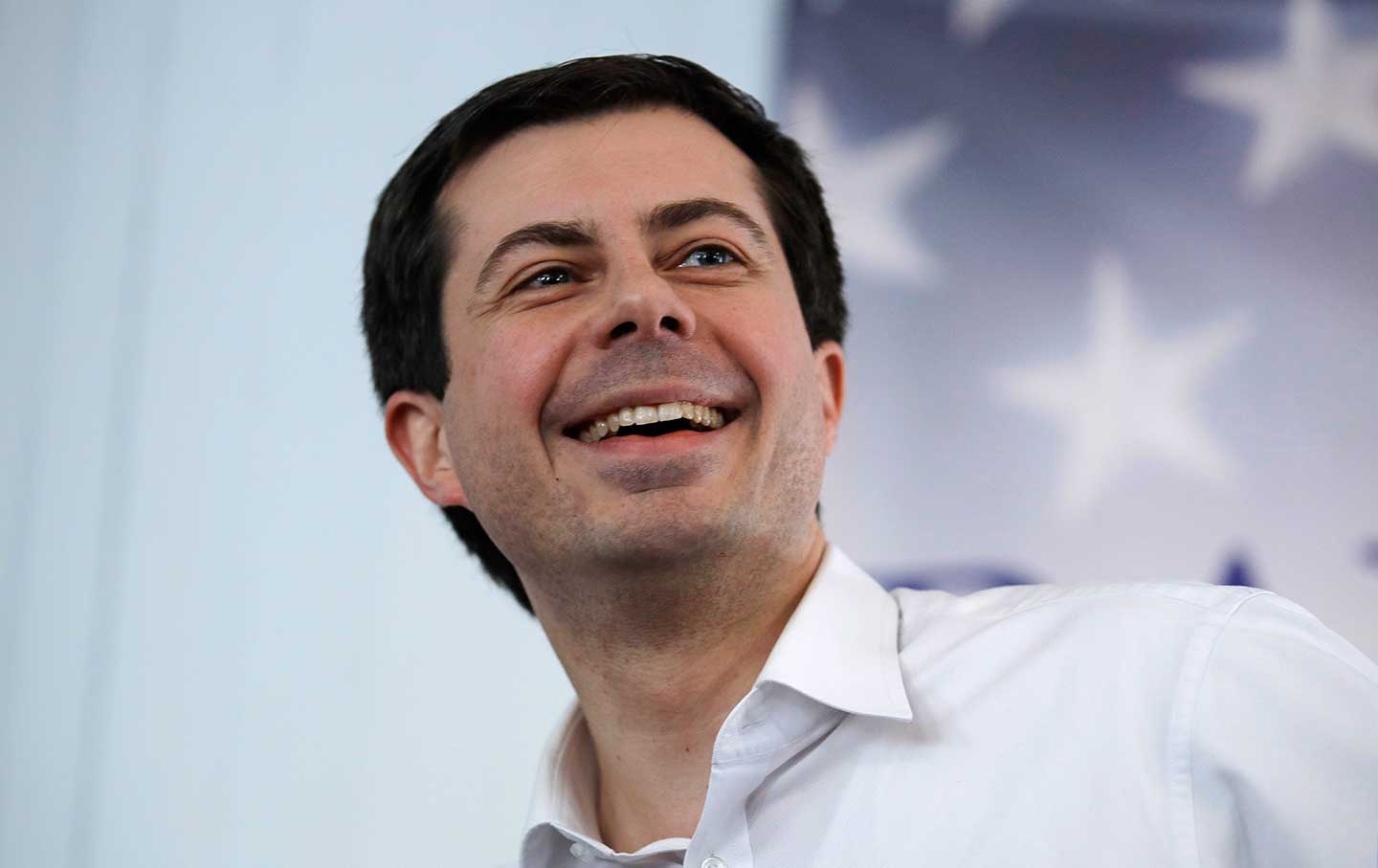 Mayor Pete Buttigieg, of South Bend, Indiana, smiles as he listens to a question during a stop in Raymond, New Hampshire, on February 16, 2019. (AP Photo / Charles Krupa)

The latest “Freedom in the World” assessment of global trends with regard to democracy contained a sobering section on the United States. “Challenges to American democracy are testing the stability of its constitutional system and threatening to undermine political rights and civil liberties worldwide,” read a breakout section from the annual survey of nations by Freedom House.

“The United States currently receives a score of 86 out of 100 points. While this places it below other major democracies such as France, Germany, and the United Kingdom, it is still firmly in the Free category. Nevertheless, its decline of eight points in as many years is significant. The United States’ closest peers with respect to total Freedom in the World scores are Belize, Croatia, Greece, Latvia, and Mongolia,” explained the analysis, which noted that “the current president’s ongoing attacks on the rule of law, fact-based journalism, and other principles and norms of democracy threaten further decline.”

Then came what challengers to Donald Trump should read as a call to action: “Having observed similar patterns in other nations where democracy was ultimately overtaken by authoritarianism, Freedom House warns that the resilience of US democratic institutions in the face of such an assault cannot be taken for granted.” 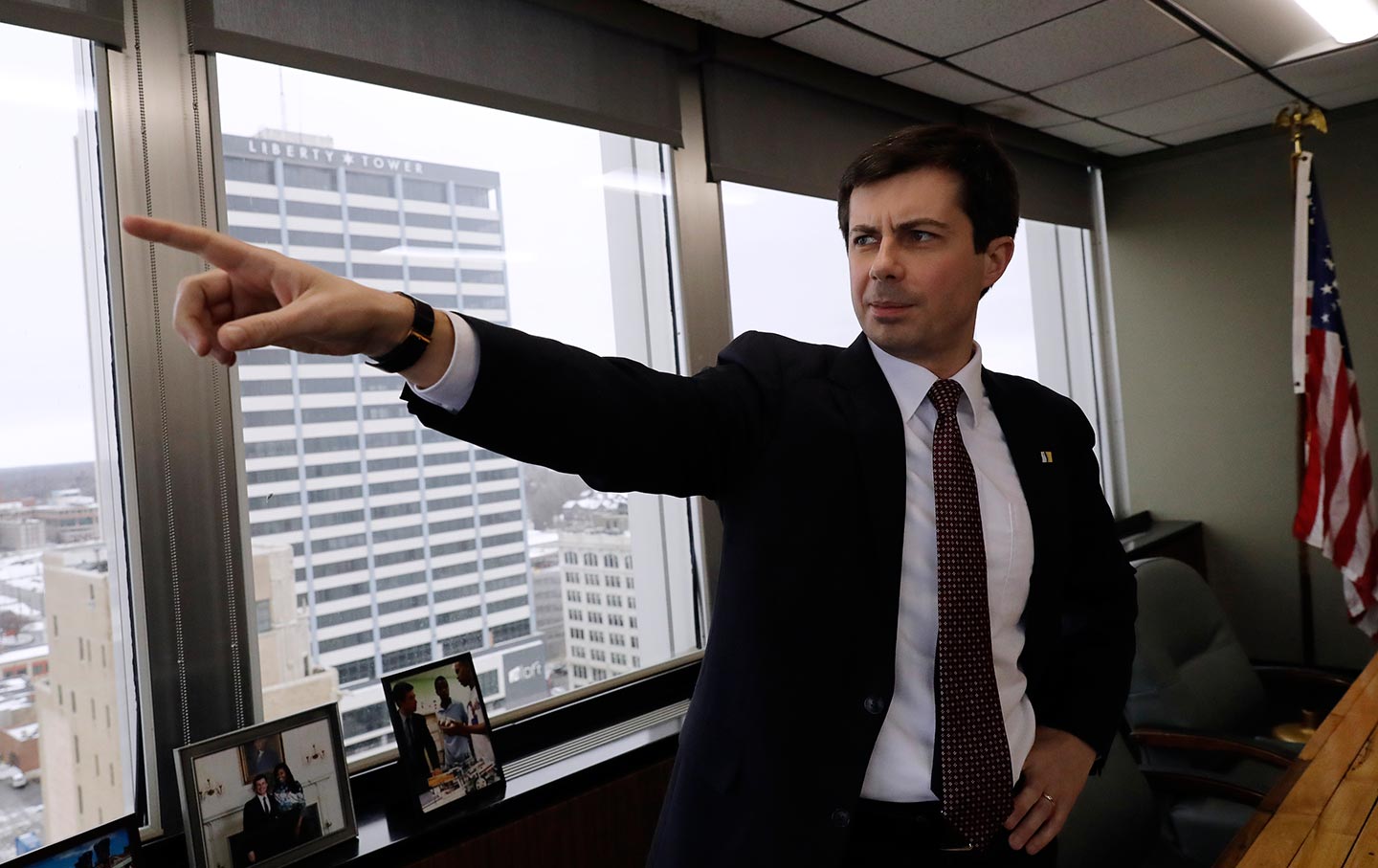 What a Midwestern Presidential Candidate Learned From Marxist Intellectuals

The report was released February 4. On February 5, Pete Buttigieg responded appropriately. “Freedom, Democracy, and Security aren’t just buzzwords,” he argued. “They’re dimensions of American life that can grow better or worse. Today’s @freedomhouse report shows the US trending downward in freedom and democracy. What will we do to change that?”

"First of all, we've got to repair our democracy. " -- @PeteButtigieg

Buttigieg’s answer is to forge a presidential bid that explores essential premises of how American democracy is threatened, and how it can be renewed.

The 37-year-old mayor of South Bend, Indiana, has gotten a good deal of attention since announcing in late January that he was forming an exploratory committee to mount a campaign for the 2020 Democratic presidential nomination. Much of that attention has focused on the prospect that he could be the nation’s youngest president (especially as compared with a field that includes a several announced and potential candidates to be the oldest commander in chief), that he could be the first openly gay major-party nominee and that he hails from the same red state that produced Vice President Mike Pence.

What makes Buttigieg’s campaigning most interesting, however, is the intense focus he has placed on American democracy. It is not the only thing he talks about. He speaks well, and in considerable detail, about Medicare for All proposals, his passion for addressing climate change, the need to get serious about gun violence, strengthening and extending existing protections against discrimination, and defending labor rights. But he argues that the discussion about fundamental change must go deeper.

“We can talk about a lot of different policy ideas and will on everything from security to healthcare,” says Buttigieg. “But our party has this tendency to lead with the policies, go with the 14-point plan and give you the binders and the power points. First [we’ve] got to explain our values and explain why the Democrats are committed to freedom, to democracy, to security—and that democracy piece has to be fixed before anything else will go well in this country.”

“We can’t nibble around the edges of a system that no longer works,” the Harvard-educated Rhodes Scholar told CBS News last month. “First of all, we’ve got to repair our democracy. The Electoral College needs to go because it’s made our society less and less democratic.”

Buttigieg is right about this, as he is right about the need for an ambitious democracy agenda that includes support for the extension of voting rights, for securing full representation for the District of Columbia and Puerto Rico in the Congress, for bold action to address gerrymandering and voter suppression and for necessary steps to overturn the Supreme Court’s Citizens United ruling. He even entertains discussions about reforms to the procedures by which the high court is organized, which necessarily begin with recognition of the damage that has been done by the “departure from norms” Republicans engaged in—with the upending of the confirmation process that blocked the nomination of Judge Merrick Garland in order to clear the way for Justice Neil Gorsuch—”to get the judiciary to the place it is today.”

“Bold, ambitious ideas need a hearing right now,” says Buttigieg, who argues that “When you follow facts where they lead, it often takes you to places that are fairly radical.”

The American experiment, at its best, has always had an openness to radical proposals, and to an understanding, which Buttigieg shares, that “pragmatism is not the same thing as incrementalism.”

Buttigieg has a lot of work ahead of him in order to get traction as a major contender in a crowded Democratic field of presidential candidates. But he has the right understanding of what is at stake and what is possible, especially when he says, “We must not become the first generation to see USA get less democratic versus more.”