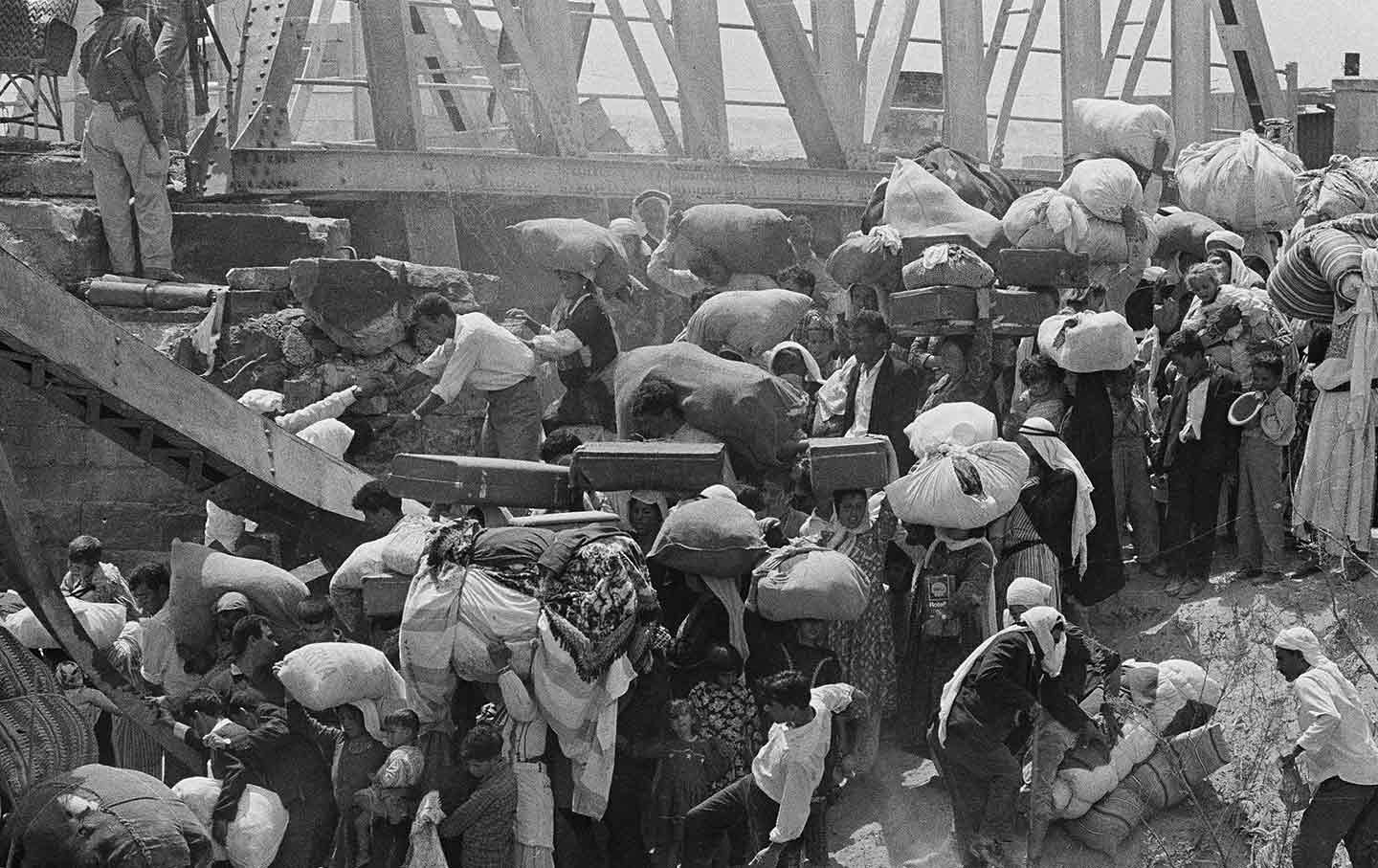 Palestinian refugees carry their belongings as they prepare to cross the wrecked Allenby Bridge over the Jordan River from the Israeli-occupied West Bank after the Six-Day War, June 22, 1967. (AP Photo / Bernard Frye, File)

After 50 years, the memories continue to haunt me often. I was 3 years old when the Six-Day War broke out between Israel and neighboring Arab countries on June 5, 1967. Everyone fled after a plane targeted our home and almost killed my mother with a bullet the size of a pen. However, I got separated from my family, because I could not put on my shoes in the darkness. I ran with strangers and found my family the next morning, but I could not find my sense of safety again.

In Ramallah, the Israeli soldiers turned our neighborhood into an army training camp, so Mother took me and my three siblings to live and study in an orphanage in East Jerusalem. I saw some of the effects of the war on other children’s lives, including seizures, lost limbs, nightmares, eating disorders, despair, and depression. The idea of crossing from a Palestinian childhood toward adolescence felt like crossing a dangerous jungle.

At the end of the school year we went home, and for two years, coexisted with the sights and sounds of army target practice, shootings and explosions, and helicopters landing and taking off in front of our house. But when some soldiers began knocking at our door and making obscene gestures at Mother when my father was away at work, my parents sold our house and we moved.

For many years, I would put on my shoes compulsively in the evening, which awakened memories of the war.

For many years, I would put on my shoes compulsively in the evening, which awakened memories of the war. I called 6 o’clock the war hour. When I first saw a reproduction of Salvador Dali’s The Persistence of Memory, I instantly understood it. The clock draped on the branch in the painting resembled a cloth I imagined Mother had washed and hung to dry on the clothesline. But this clock-cloth was stained by war. If squeezed like a wet shirt, people’s screams and nightmares would drip a pool of pain under it.

As a teenager, I was educated at United Nations schools for Palestinian refugees and then at government schools administered by al-halkem al-askaree, the Israeli military administrator. We could be punished for saying the word “Palestine” or drawing the Palestinian flag. Only soldiers and settlers were allowed to have weapons. Palestinians were expected to accept harm without defending themselves, so the soldiers and settlers behaved with impunity. Often, snipers on rooftops would point their guns at us as we walked to school.

Often, snipers on rooftops would point their guns at us as we walked to school.

I used to wonder whether people in other parts of the world knew what it was like for Palestinians living under Israeli occupation. I found hope by writing pen-pal letters to people from around the world and memorizing a summary of the Universal Declaration of Human Rights, personalizing it for myself and others by adding our names. I also made an early decision that when I became an adult, I would not have children. The prospect of losing my child to war, or being unable to protect my child, felt unbearable. Helping to create a safer world for children already born by encouraging creativity and kindness, and by sharing personal stories from the heart to foster more empathy, inspired me.

During my years of growing up, the only Israelis or Jews I saw around me were soldiers or armed settlers. One day after I finished high school, I visited West Jerusalem alone, pretending that I was a tourist and speaking only English. When soldiers came to search my backpack, as they did habitually, a teenage Israeli girl with whom I was speaking in English, and who had told me earlier that Arabs were terrorists, told the soldiers not to search me because I was her friend. They let me go with all my Arabic notebooks and pens inside my backpack. The girl and I embraced, parted, and never met again. I remember wishing that we could meet in a different context, where I would explain to her that I was a Palestinian Arab and that Arabs lived in at least 20 countries, and I would invite her to visit my home and we would become friends.

My college years, in the 1980s, brought great challenges. I went to Birzeit University, near Ramallah, where the army imposed campus closures repeatedly; my first semester lasted from October to June. To evade the closures, we sometimes held classes off-campus; when the army found out, they would punish us. One settler kidnapped me from a street near campus and held me at gunpoint for half a day.

The Israeli-American Hammer-Lock on Palestine

The Historians’ War Over the Six-Day War

There were no courts that Palestinians could go to when we were harmed by the army or settlers. It was like living in a war zone, where people were punished for wanting dignity and freedom. Many were placed in administrative detention without trial—some for a short time but some for years. Some people simply disappeared—one of my cousins disappeared permanently.

The violence of the occupation seeped into all levels of Palestinian life, eroding respect for authority. During my college years, a few students beat up one of the Palestinian professors for his political views, an echo of the behavior of Israeli army soldiers, who often beat up students for their political views. Other students boycotted American professors suspected of being CIA informants. The Israeli secret services tried to infiltrate all aspects of Palestinian society, which made trusting teachers, friends, neighbors, or even relatives with different political views a dangerous prospect. Before graduating, I saw one of my classmates get shot on campus by Israeli snipers. When students tried to rush him to the hospital, the army formed a checkpoint and stopped the car for more than half an hour, until he bled to death in the backseat. I fell into a depression, and after having been an athlete, began to chain-smoke, like most people around me.

The violence of the occupation seeped into all levels of Palestinian life, eroding respect for authority.

I came to America at age 22 and quickly found out how difficult it was to speak about Palestine and Palestinian rights in the United States. It was like speaking to President Trump nowadays about his sexism; the common response was complete denial, even in the face of overwhelming evidence. One of my graduate-school professors told me that I should not do my research on Palestine because a Palestinian writing about Palestine would be biased. When I asked another professor what I must do to get an A in her class, she responded by saying, “It depends on whether my children come home safe from Israel.”

To cultivate hope that pervasive discrimination against Palestinians would end someday, I compiled a list of historical developments that at one time seemed impossible. The list included women getting the vote, the abolition of slavery in many countries, humans landing on the moon—and my landing in America to live in relative freedom, after having lived without freedom for two decades.

My list helped me to endure questions from people who wanted to determine whether I was a good-enough Palestinian, or was anti-Semitic (not likely, since as a Palestinian Arab, I—like all speakers of Arabic, a Semitic language—am myself a Semite). I was endlessly asked: Does Israel have a right to exist? People asked this even though Israel is on the world map as a country and is a member of the United Nations, while Palestine has been taken off the map and is denied equal representation and recognition. Rarely did people concern themselves with whether Palestine has a right to exist.

I realized that in America, many people have only one perspective about Israel and Palestine, and that is the erroneous claim that Palestine never existed at any point in history—without consulting an encyclopedia or an Old World map or early UN resolutions, or the Bible, or knowing that Jews who lived in Palestine before the State of Israel was established called themselves Palestinian Jews. Palestine existed until it was replaced by Israel, and the Palestinians themselves are descendants of the House of Abraham, which embraces Jews, Christians, and Muslims. If the Western Judeo-Christian tradition excluded Islamophobia, it would be known as the Judeo-Christian-Islamic tradition.

Many Americans have only one perspective about Israel and Palestine: the erroneous claim that Palestine never existed.

NASA launched the Hubble Space Telescope in 1990 to send images to Earth from different perspectives, in order for scientists to understand the big picture and make more informed decisions. I used that experiment to illustrate the need for multiple perspectives on Palestine and Israel. The demeaning—all too often, the outright burial—of Palestinian perspectives has contributed to a culture of denial that is resonant of older times, when the authorities insisted that the earth could be seen from only one perspective, and therefore must be flat. Such a flattening perspective regarding Palestine has helped to prolong and deepen the military occupation, which is vaguely termed a “conflict.”

In a recent memorable moment for me and millions of others, during his 2016 elections campaign Senator Bernie Sanders called for respecting the Palestinian people. “Re-spect,” after all, means to look again, or look back on. The world has treated the Palestinian people as invisible. Looking again, to see both what happened and what is still happening to the Palestinians, is an urgent necessity. The Palestinians have been victimized for decades, as they were forced to pay—with their homeland, their lives, and their freedom—reparations for the Holocaust, one of the biggest crimes in modern history, but one committed in Europe, not the Middle East. To acknowledge that securing a homeland for the Jews and granting them freedom inflicted grave damages on the Palestinians and their freedom would be a step in the healing direction.

When, as a memoirist, I visited Ramallah several years ago to encourage Palestinian children to write down their stories, roomfuls of elementary and middle schoolers told me that they could not imagine freedom, even for a moment. They said that when they closed their eyes, they saw violence, checkpoints, and the wall that surrounds Palestinian cities and is twice as high as the Berlin Wall was. I work with schools and colleges in America, too, and it’s astonishing to see how little the average American—educators as well as students—knows about Palestine and Palestinians. Many are afraid to bring the topic of Palestine to the classroom. One teacher told me that the administration in her school would allow her to teach pornography to her students before allowing her to teach anything about Palestine.