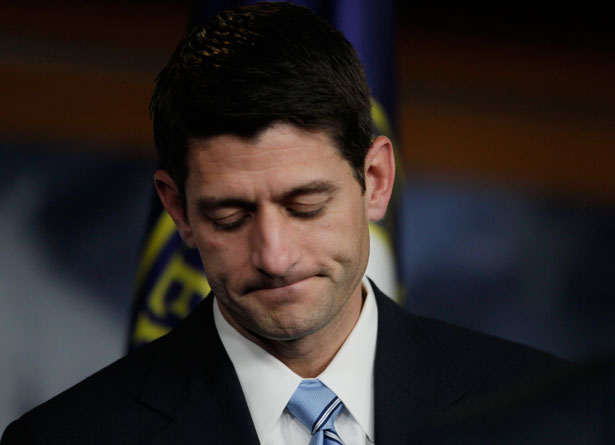 Paul Ryan’s fellow Republicans are quick to dismiss Elizabeth Warren as too radical, too progressive, too populist.

But Ryan is trying—a bit clumsily, but trying all the same—to borrow a page from the Massachusetts senator as he seeks to remake himself in anticipation of a potential 2016 run for the Republican presidential nomination. He’s talking about poverty, about inequality, about shifting the focus away from meeting the demands of corporations and toward meeting the needs of Americans.

Instead of repeating the Mittnomers of 2012—“Corporations are people, my friend”—Ryan is suddenly informing fellow conservatives, “There’s another fallacy popular among our ranks. Just as some think anything government does is wrong, others think anything business does is right. But in fact they’re two sides of the same coin. Both big government and big business like to stack the deck in their favor. And though they are sometimes adversaries, they are far too often allies.”

True enough. Populists and progressives have warned for more than a century that corporations are “boldly marching, not for economic conquests only, but for political power.” The author of those words, former Wisconsin Supreme Court Justice Edward Ryan , asked in 1873: “Which shall rule—wealth or man; which shall lead—money or intellect; who shall fill public stations—educated and patriotic free men, or the feudal serfs of corporate capital?” Edward Ryan’s worst fears have been confirmed, as Elizabeth Warren noted when she told Netroots Nation activists, “The game is rigged and the rich and the powerful have lobbyists and lawyers and plenty of friends in Congress. Everybody else, not so much.”

Cue Paul Ryan, announcing as only a career politician can, that “our country has had enough of politics.” He’s proposing to “reconceive the federal government’s role in the fight against poverty.” And he is even ripping corporations, decrying the way in which big government has become “a willing accomplice” of big business.

But don’t look for Paul Ryan on the front lines of actual fights to reduce inequality or address injustice.

The House Budget Committee chairman, who on Thursday released an “anti-poverty proposal” that rehashed decades-old schemes to scale back safety-net programs and regulatory protections for low-income Americans, offers scant evidence of a serious determination to solve the problems that have got Americans up in arms. If Ryan was serious, he wouldn’t be proposing, as his “Opportunity Grant” plan does, to “consolidate” existing federal programs to aid the poor into block grants to the states—an approach that would give Republican governors, who have already shown a penchant for undermining healthcare, food-stamp and education initiatives, the “flexibility” to do even more harm.

Congressman Chris Van Hollen, a Maryland Democrat who serves with Ryan on the Budget Committee, nails it when he warns about a proposal that “uses the sunny language of ‘reform’ as a guise to cut vital safety-net programs.”

Marian Wright Edelman was even blunter.

“House Budget Chair Paul Ryan’s draft is a small, mean and worn idea that picks on poor children and families while not asking for one cent of sacrifice from rich corporations and rich individuals. His proposal would dismantle the safety net that is working,” said the president of the Children’s Defense Fund, who ticked off federal programs that would be threatened by Ryan’s scheme. “Head Start works, it gets poor children ready for school. The Supplemental Nutrition Assistance Program (SNAP) works, it keeps the wolves of hunger at bay. Title I works, the funds are going to help our most disadvantaged schools and students, but the funds need to be increased and accountability tightened. I look forward to the next draft from Chairman Ryan that is fair to poor children and families and asks the rich corporations and individuals to pay their fair share.”

Edelman could end up waiting for a long time, as the congressman has not coupled his momentarily populist rhetoric with anything akin to a call for corporate responsibility or fair taxation.

So if Ryan is not really worried about holding corporations to account, and if he is not evidencing a serious intent address the problem of inequality, what is on his mind?

The answer, of course, is that Ryan is worried about addressing his own problem: an association in the public’s mind with the failed messages of the 2012 Romney-Ryan campaign.

Last week’s populist speech at the Center for Constitutional Studies and Citizenship and this week’s poverty speech at the American Enterprise Institute begin the roll-out of Paul Ryan Version 2.0. Next comes the August publication of Ryan’s 2016 campaign book, The Way Forward: Renewing the American Idea, complete with its epic cover shot of Americans reaching out to touch a triumphal Ryan. Then there’s the bus tour.

So Ryan is campaigning. To the extent that it is possible he will do so in populist style and with populist rhetoric about crony capitalism and fighting poverty.

But don’t be confused.

This is still the same Paul Ryan who during the current election cycle has padded his campaign committee and “leadership PAC” accounts with almost $9 million in donations—with Wall Street securities and investment interests and the health-insurance industry giving most generously. And this is the same Paul Ryan who, when Congress took its August break in 2013 jetted home to Wisconsin via Arizona—where he was a featured speaker at the annual retreat for billionaire donors organized by the Koch brothers.

The other featured speaker was then–House majority leader Eric Cantor, for whom the ensuing months did not go well. Cantor’s Republican primary defeat—at the hands of a critic of “crony capitalism”—provided an indication that the American people are increasingly agitated. And increasingly disinclined toward the sort of insider politics practiced by career politicians such as Ryan.

Ryan got the signal.

He is rebranding himself.

He has downloaded some populist rhetoric to go with his “kinder, gentler” talk about poverty.

But Paul Ryan’s populism is not the real thing. It’s the Koch-tested, Koch-approved version.