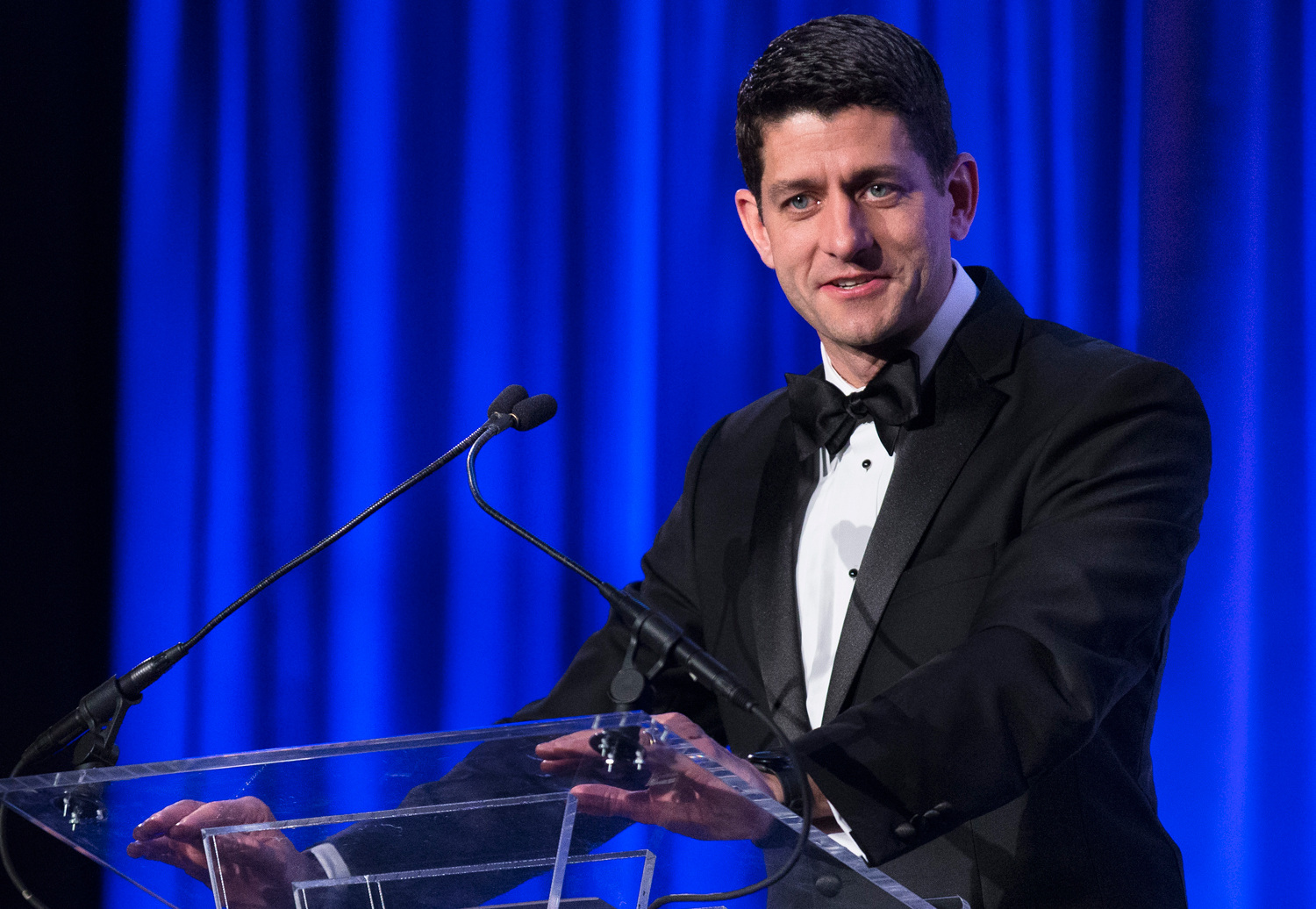 Representative Paul Ryan speaks at the Manhattan Institute for Policy Research Alexander Hamilton Award Dinner on May 12, 2014, in midtown Manhattan, where he courted some of Wall Street’s most powerful political donors and tuxedoed hedge fund executives. (AP/John Minchillo)

Like Marco Rubio—who, earlier this year, put forward a much-criticized “anti-poverty plan”—Paul Ryan doesn’t like poverty, either. (And neither does Rand Paul, as explained in a Wall Street Journal analysis of Ryan’s, Rubio’s, and Paul’s poverty ideas.) And like Rubio and Paul, Ryan might like to run for president in 2016, in a Republican candidate field that so far lacks anything like a front-runner. So that’s the context for Ryan’s speech on July 24 at the American Enterprise Institute to release a 73-page plan called “Expanding Opportunity in America.” Among progressives, the left, most Democrats, and people who actually know something about poverty and inequality, Ryan’s plan has been widely panned, too, and for good reason.

The release of Ryan’s plan, clearly an opening salvo in what Ryan hopes will be his 2016 presidential bid, comes amid a growing realization among Republicans that the GOP has utterly lost any ability to appeal to poor, working-class and lower-middle-class voters, in part thanks to the lasting impression left by Mitt Romney’s elitist, country-club, 47 percent-bashing 2012 campaign. In that context, as Christie Watch detailed last week in a special, three-part series on “reform conservatism” (see Part I, Part II and Part III), Ryan’s plan ought to be seen as part of the GOP’s fits-and-starts effort to recast its appeal to people who don’t own businesses or clip investment coupons. As the Christie Watch series detailed, however, the “reformicons” of the GOP—like George W. Bush’s “compassionate conservatism”—don’t really signal a break with Republican orthodoxy, nor is Ryan’s repackaging of traditional Republican views on the social safety net. But he’s already won major plaudits from one of the leading lights of the reform-conservative movement, Ross Douthat of The New York Times, who says that Ryan’s blueprint “synthesizes ‘reformicon’ ideas with proposals that fit pretty easily under the other possible rubric for a renovated conservative domestic policy.”

We’ll get to the details of Ryan’s plan in a minute, but at first it’s useful to point out that Douthat is absolutely right when he contrasts Ryan’s allegedly “big” ideas with the fact that among Democrats—and that would include President Obama—there is virtually no sign that they’re planning to put forward anything that remotely resembles a big idea. There is, says Douthat, a “growing contrast between the policy ferment on the Republican side of the aisle and the staleness and or small-ball quality of the Democratic Party’s ‘what comes after Obama?’ agenda,” such as “an expansion of Social Security to a guaranteed income.” True, that.

Amid the widespread disparagement of Ryan’s plans by even moderate liberals, who recognize that it’s mostly yet another Republican plan to wrap any and all anti-poverty program into one big, unregulated block-grant ball of wax for the states, there is at least some grudging respect for one part of Ryan’s plan, namely, his scheme to expand the Earned Income Tax Credit. The EITC, which had its origins as a conservative, Milton Friedman-backed idea, has since earned strong support on both sides of the aisle. The Washington Post says in an editorial:

Mr. Ryan’s best idea is a substantial expansion of the earned-income tax credit, a wage supplement for low-income workers administered through the tax code. Currently the third-largest federal poverty-fighting program at $59 billion per year, the EITC has a proven track record of lifting families out of poverty and stimulating work effort. But it offers only skimpy assistance to childless adult workers, which Mr. Ryan would remedy by doubling the maximum annual credit for such workers to $1,005 and lowering the eligibility age from 25 to 21. It’s nearly identical to a proposal in President Obama’s 2015 budget that would have cost roughly $60 billion over 10 years.

And there’s something to be said about what the Ryan plan signals as a change in tone in what has been a long-running GOP message. That message, which reached an ear-splitting crescendo in 2012, was that a huge cross-section of America’s working poor and working and middle classes don’t pay any federal income taxes. As Neil Irwin points out in an analysis in The New York Times, conservatives and outlets such as The Wall Street Journal have long argued that forcing low-income workers to pay taxes would cause them to have some “skin in the game” and make them resistant to increased government spending. As Irwin writes:

“Workers who pay little or no taxes can hardly be expected to care about tax relief for everybody else,” wrote The Wall Street Journal in 2002, in an editorial notable for calling those low-income Americans “lucky duckies” for their low tax bills. “They are also that much more detached from recognizing the costs of government.” This is also the nub of Mr. Romney’s polarizing comments to donors in advance of the 2012 election. “These are people who pay no income tax,” he said, referring to people who were set to vote for President Obama. “Forty-seven percent of Americans pay no income tax. So our message of low taxes doesn’t connect.”

So at least give Ryan credit for refusing to refer to the poor as “lucky duckies.” But his proposal to block-grant money to the states is an old, worn-out GOP idea, and a piece in The New York Times succinctly describes why the block grant idea isn’t anything new:

But the lack of seriousness in the plan is demonstrated by its supposedly big idea: It would combine 11 of the most important federal poverty programs into something called an “opportunity grant” that would be given to the states to spend as they see fit. The eliminated programs would include food stamps, what remains of the welfare system (known as Temporary Assistance to Needy Families), Section 8 housing vouchers, and low-income heating assistance, among others. This technique should sound familiar. Members of Mr. Ryan’s party have spent years promoting the idea that states can do things better than Washington. As Rick Santorum repeated endlessly in 2012, “Cap it, cut it, freeze it, and block-grant it to the states.”

Writing for Reuters, and via Wonkblog, David Lawder describes how Ryan’s plan would (and wouldn’t) work:

A 24-year-old single mother of two…could go to a local social services provider for help. Instead of applying for food stamps, housing vouchers and welfare checks, she would meet with a case manager and draft an ‘opportunity plan’ to achieve her goals, targeting money where it is needed most…. The catch: she would have to sign a contract and meet certain benchmarks for success…. Failure would mean a cut in aid while exceeding expectations would earn her a bonus. There would be a time limit on assistance, and Ryan said the plan would need to show strong evidence of positive outcomes and poverty reduction.

Flaws aside, clearly Ryan hopes that his plan will catapult him into the ranks of the serious, and seriously wonky, 2016 contenders. It won’t win the Ayn Rand–loving Wisconsin any support on the left, but Ryan—who’s often not considered in presidential polls that focus on Rubio, Paul, Chris Christie, Ted Cruz, Mike Huckabee, and others—is starting to get presidential traction. As Hot Air tells us:

Rep. Paul Ryan (R-WI), the Republican Party’s bookish former vice presidential nominee, is starting to look like a candidate for the presidency in 2016. In August, Ryan will publish a book with a distinctly campaign-themed title, The Way Forward. On Tuesday, the Federal Election Commission approved of a nationwide book tour sponsored by Ryan’s publisher and the Political Action Committee the Wisconsin congressman founded, Prosperity Action PAC.

Back in May, as Politico reports, Ryan met with some big-money Republicans:

Rep. Paul Ryan told a group of business elites and donors at a New York City fundraiser that he’s asking friends and supporters “to keep their powder dry” as he mulls a 2016 presidential bid, two attendees told POLITICO.

And a recent Gallup Poll found Ryan clustered with Paul, Huckabee and Rick Perry as the would-be candidates with the highest “favorability” rating.