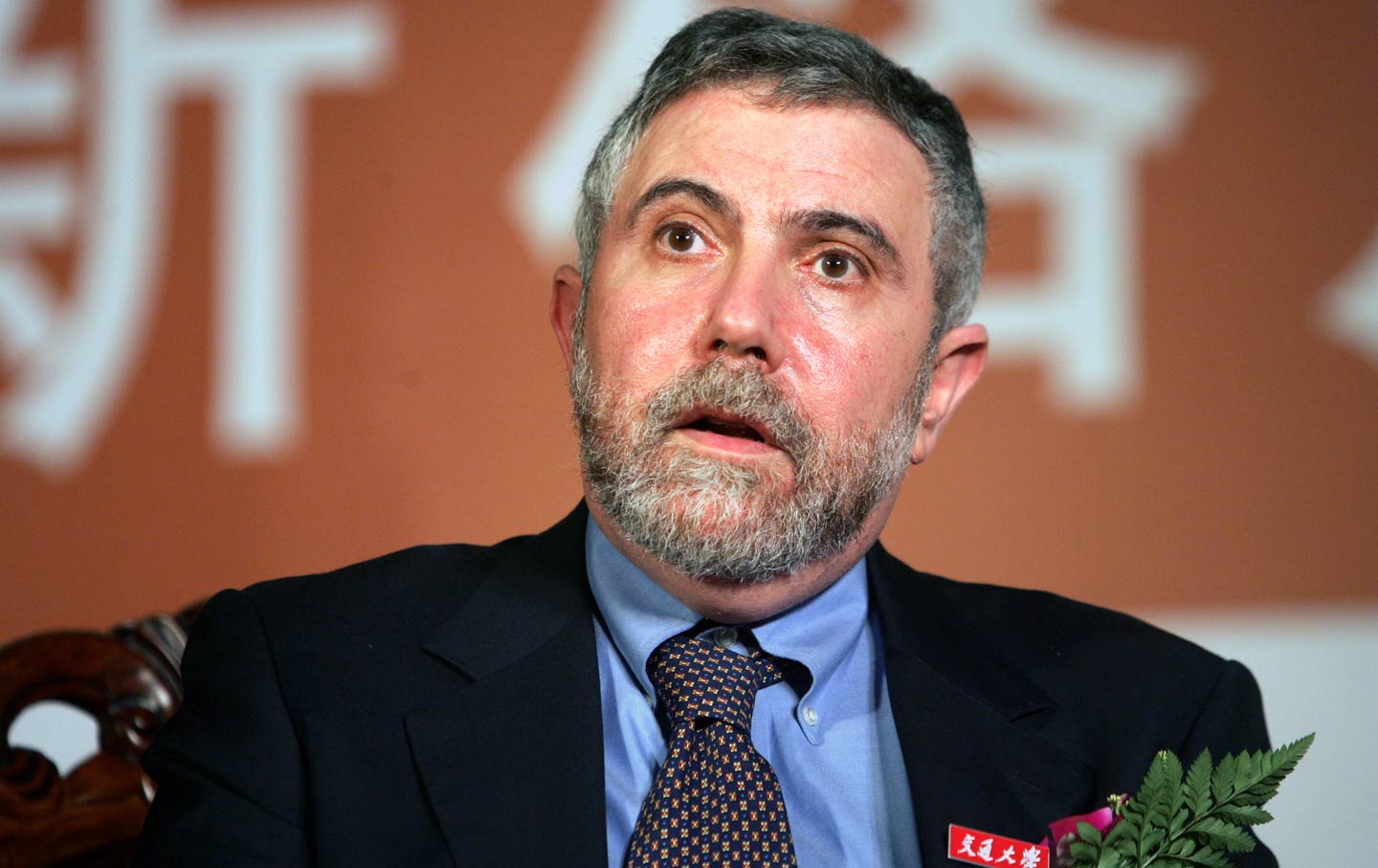 Paul Krugman appears at a forum in Shanghai. (Imaginechina via AP Images)

The working-class voters of Michigan put a big dent in Hillary Clinton’s campaign, but they also body-slammed celebrated economists like New York Times columnist Paul Krugman, who made his name by relentlessly ridiculing critics of globalization like myself.

Anti-trade anger was the decisive issue that gave Bernie Sanders his victory in the Michigan primary. In the aftermath, Krugman decided to raise the white flag of surrender.

The Nobel Prize–winning economist now admits in a column and blog that the orthodox case he championed for “free-trade” globalization was mostly garbage. Now he tells us. On a point of personal privilege, I claim the right to hoot derisively.

I am among the supposedly misguided reporters who didn’t major in economics but wrote critically about what we saw unfolding in the “manic logic of global capitalism” (the subtitle for my One World, Ready or Not, which Krugman dismissed as “a thoroughly silly book”). The multinationals were colonizing the world while systematically draining America of manufacturing and the core jobs of our broadly shared prosperity. Meanwhile, the globalizing companies brutishly exploited the low-wage peasant workers in their new factories in Asia.

The professor stomped hard on my reporting, so naturally I took it personally. But his belated confessional should be understood as a meaningful indicator of economic orthodoxy in collapse.

The facts did not fit the professor’s theory. Yet influential voices like Krugman grossly misled the nation’s political debate for a generation. He was the bell cow for a herd of ambitious young academics who mimicked his sharp-tongued style and worshiped at the same shrine of macroeconomics that’s now a shambles.

Krugman hasn’t lost his snide manner (he accuses Senator Sanders of “the luxury of irresponsibility”), and he pretends not to have reversed himself. But here is his white flag:

It’s also true that much of the elite defense of globalization is basically dishonest: false claims of inevitability, scare tactics (protectionism causes depressions!), vastly exaggerated claims for the benefits of trade liberalization and the costs of protection, hand-waving away the large distributional effects that are what standard models actually predict.

After that mouthful of a correction, Krugman turns uncharacteristically modest about his own performance as an economic prognosticator. “I hope, by the way, that I haven’t done any of that,” the professor wrote. His students who know better should respond with spitballs.

Let me refresh Krugman’s memory. I offer a few examples from the glory decades, when he was leading cheers for globalizing capitalism. He did not see anything especially new or threatening about it, certainly not for the triumphant United States. To Krugman, the emerging system looked more or less like the textbook capitalism he taught.

In the Harvard Business Review in 1994, he belittled “a steady drumbeat of warnings about the threat that low-wage imports pose to US living standards…. The truth, however, is that fears about the economic impact of Third World competition are almost entirely unjustified. Economic growth in low-wage nations is in principle as likely to raise as to lower per capita income in high-wage countries; the actual effects have been negligible.”

Krugman was skeptical that very poor nations (like, say, China) could increase productivity in advanced goods like computer chips, but if they did, “these emerging economies would see their wage rates in terms of chips rise—end of story,” he wrote. “There would be no impact, positive or negative, on real wages in other, initially higher-wage countries.” Like, say, the United States.

But what if investment capital from the United States and other advanced economies decided to invest heavily in poorer nations (like China) to gain a foothold in their burgeoning consumer markets? “A likely outcome is that high-tech goods will be produced only in the North [advanced industrial economies], low-tech goods only in the South [low-wage developing economies].”

But couldn’t this low-wage competition undermine US wages, as organized labor warned? “The short answer is yes in principle but no in practice,” the professor wrote. “As a matter of standard textbook theory, international flows of capital from North to South could lower Northern wages. The actual flows that have taken place since 1990, however, are far too small to have the devastating impacts that many people envision.”

Krugman’s high point as the reassuring expert was perhaps another 1994 essay, titled “The Myth of Asia’s Miracle,” for Foreign Affairs, journal of the corporate-financial establishment. “Popular enthusiasm about Asia’s boom deserves to have some cold water thrown on it,” he declared. “The future prospects for that growth are more limited than almost anyone now imagines.”

Now we can imagine it.

Krugman’s mean-spirited put-downs of people who disagree with him suggest we think of him as the Donald Trump of academic economics. The professor might demonstrate a little humility by publishing a correction in The New York Times. Alas, too late for the angry workers in Michigan who voted for Bernie.