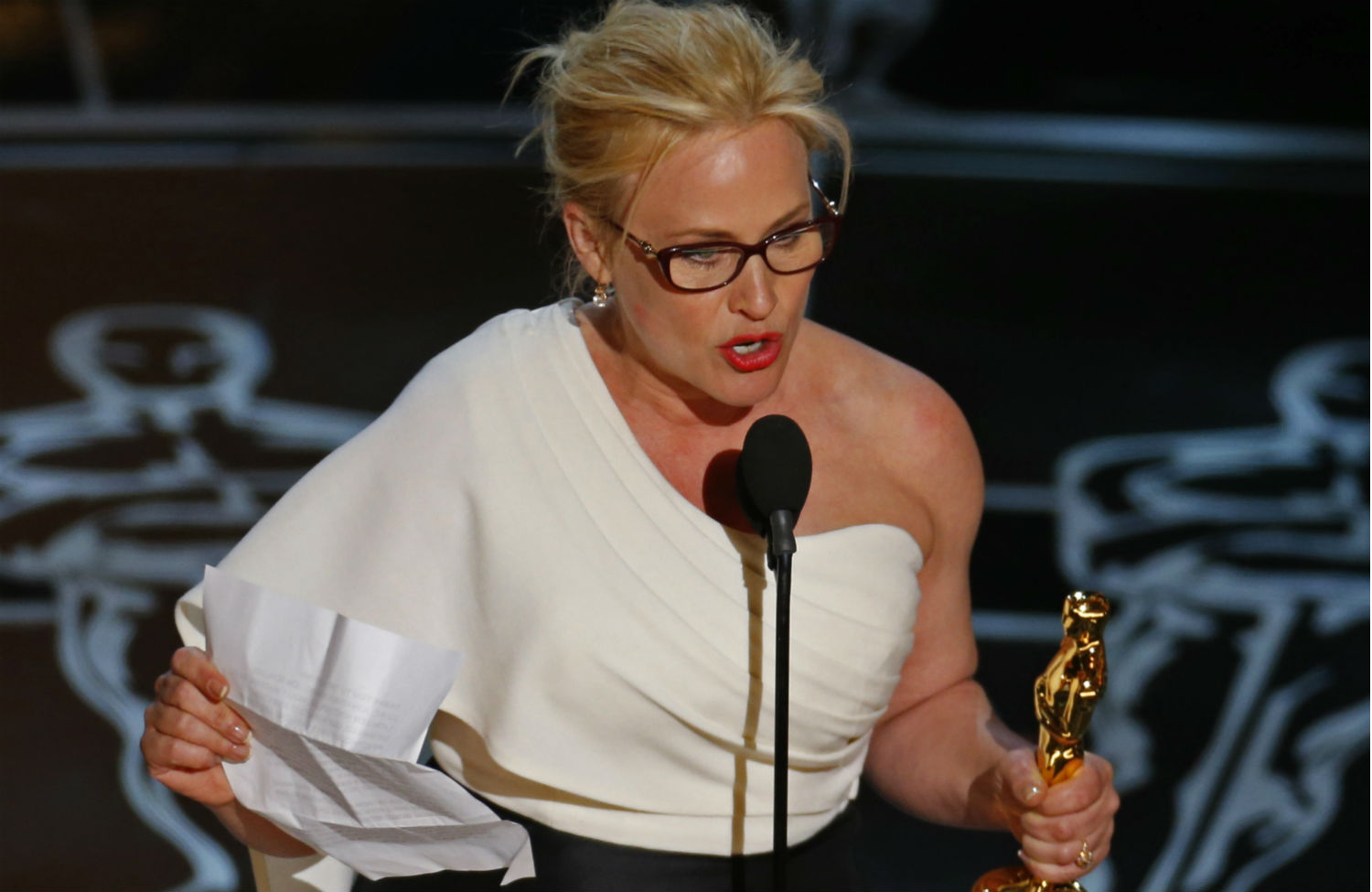 Patricia Arquette accepts the award for Best Supporting Actress for her role in Boyhood at the 87th Academy Awards. (Reuters/Mike Blake)

I’ll never forget that night in 1993 when “teenage me” was sitting with my girlfriend at the midnight show of a flick written by the guy who did Reservoir Dogs. It was called True Romance. We swallowed whole a film about two adventure junkies on a road trip to Hollywood involving a suitcase full of coke, the Detroit mob, a dreadlocked Gary Oldman, Brad Pitt with a honey-bear bong, and young lovers. One was Ms. Alabama Worley, played by Patricia Arquette, and by the time the film finished, I was good and smitten. Maybe it was the scene where she used a Swiss army knife to take out a hulking sadistic mob hitman played by a young unknown named James Gandolfini. Maybe it was writing “youre so cool” (no apostrophe) on a napkin for her true love, Clarence. Maybe it was the look on her face in the final scene, no makeup, smiling on the beach. Whatever it was, Patricia Arquette immediately became someone whose career I never stopped tracking.

Over the last twenty years that career has included one of the most under-rated comedies ever made, Flirting with Disaster, amidst a series of clearly dwindling opportunities. She was looking like one of the subjects of her sister Rosanna’s searing documentary Searching for Debra Winger, about Hollywood actresses becoming expendable after the criminally young age of 40. That’s what made her Best Supporting Actress Oscar win last night for Boyhood so satisfying. Famously filmed over twelve years, it is really a film about her character as much as it is about her son. The film captures Ms. Arquette aging in real time, her body and face subtly altering like that of a normal human being. Maybe I was projecting, but it felt that the Richard Linklater film, as much as anything else, was about how cruel we are to see the wisdom and character earned through time as some sort of deficit.

It has been a joy to see Patricia Arquette get her due this award season, culminating with her Oscar. I had been playing a drinking game last night where I took a sip every time Neil Patrick Harris didn’t make me laugh so I was nice and toasty by the time her name was called. I have a friend who did some of the makeup for Boyhood, and she told me stories about Ms. Arquette talking to cast and crew about equal pay for women. I knew this was an issue close to her heart and when she spoke about it, I raised my glass, cheered and took a drink.

In other words, as soon as I heard, “It’s our time to have wage equality once and for all, and equal rights for women in the United States of America” I whooped and tweeted the following in a state of Arquette euphoria.

But later that night, when she was asked to expand on her views backstage, the problems began. Ms Arquette said:

Part of me is very hesitant to attack an actor I deeply respect for having the courage to say anything about the important issue of equal pay for women, and to judge her views on the basis of what surely must have been an adrenaline-spiked high backstage at an awards show. I’m also hesitant as a man to say something when a woman—or anyone—actually has the courage to even raise these issues on such a profoundly elevated public space. But something really does need to be said about this. To quote Prof. Brittany Cooper’s Twitter feed, it is wrong to expect “Black feminists to do [the] labor” of breaking down exactly what is so problematic about Ms. Arquette’s message. Ms. Arquette’s words will be quoted extensively and applauded with the gusto shared by Meryl Streep and Jennifer Lopez, so they demand a great many responses from a great many angles. Here is mine.

What is so aggravating is that Ms. Arquette’s comments could best be described as “anti-intersectional.” When you speak of equal pay for women and call upon “all the gay people and all the people of color that we’ve fought for, to fight for us now” it states pretty clearly that you see your struggle as one of straight, white, native-born women for equal pay, as if there aren’t masses of people who live beneath the weight of multiple labels that would benefit from such reforms. It would have been so easy for Ms. Arquette to say something like, “If we had laws in this country ensuring equal pay for women, it would mean equal pay for all women of color and all of our LGBT sisters.” But she chose instead a “we fought for you now you fight for us” approach to fighting oppression.

Unfortunately this is not only cringe-inducing, but it’s also historically negligent. Saying “we fought for you, now you fight for us” implies that battles against racism, anti-LGBT bigotry and other forms of oppression owe a massive debt to the heroism of straight white, middle- and upper-class women. In the context of a year that has seen the #BlackLivesMatter movement expand consciousness about the realities of police violence, a criminally underreported spike in trans murders and the searing pain of the Chapel Hill killings, such a statement could not sound more tin-eared.

It also blatantly ignores—instead of owning—the ways in which white-led middle-class feminist movements have in many instances historically ignored or even opposed the movements of workers, people of color and other oppressed groups. There are so many scholars and activists trying to actually own this history and change the ways in which people interact and organize in the future. It was difficult not to feel the pain of every person carefully trying to build those fragile alliances, only to have Ms. Arquette remind many precisely why those alliances need to be constructed in the first place.

This is a moment when the need for people to come together, fight with and for each other and most critically listen to one another, has never been more vital. No one is going to come together if they feel that they are not being heard. We should hear Patricia Arquette’s righteous and urgent call for fair pay. We should hope Patricia Arquette hears why that message will need a rewrite if she wants the support such a movement will demand.