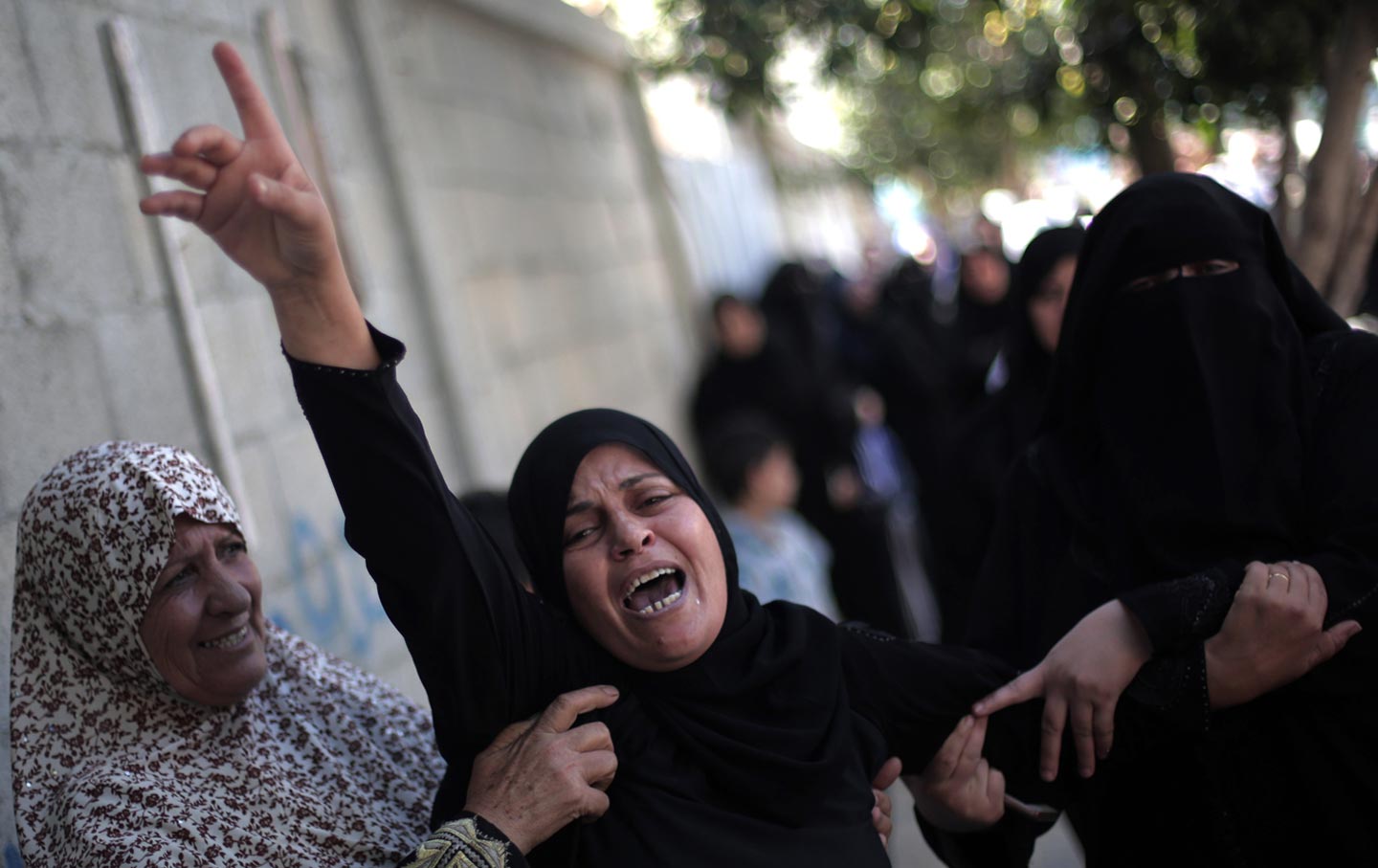 Palestinian women mourn at the funeral of Ahmed Al-Serhi, 27, who was killed during clashes with Israeli troops. (AP Photo / Khalil Hamra)

Palestinians have taken to the streets to demonstrate against nearly 50 years of military rule and the denial of their freedom at the hands of Israel. These protests come after the death of the peace process, the election of a right-wing Israeli government that has stated it has no intention of granting Palestinians their rights, and growing discontent with the unelected Palestinian Authority (PA).

The protests have also been fueled by repeated Israeli announcements of settlement expansion; settler attacks on Palestinian lives, property, and holy places; and the Israeli government’s decision to allow right-wing extremists who seek the destruction of the Al-Aqsa Mosque to enter the Haram al-Sharif compound while simultaneously denying Palestinians access to their holy sites.

Seeking to quell the unrest, Israeli Prime Minister Benjamin Netanyahu announced that his government would undertake more stringent measures to suppress Palestinian protests, including the use of live rounds against demonstrators and the immediate demolition of residences belonging to Palestinians involved in violence. Palestinians are not safe, not even in their own homes. Israel is also threatening to remove Palestinians from Jerusalem, rendering them stateless.

And while the mainstream Western media focus heavily on the loss of Israeli lives, Palestinian deaths are often treated as mere numbers and statistics. More importantly, lost in the media coverage of the violence from “both sides” is the fact that only one side is occupying the other.

In this climate, a new framework is needed that places civilians and their rights at the fore. With no end to Israel’s military rule in sight, it is time for an international protection mechanism to be created. Here’s why:

First, as the occupying party, Israel is required under international law to ensure the protection of the civilians under its rule. Instead, Israel has, during its 48-year occupation and colonization of Palestinian land, done exactly the opposite.

Two Palestinian generations have grown up entirely under Israel’s military control. By 2014, more than 800,000 Palestinians had been imprisoned by Israel, including 8,000 children under the age of 18 arrested since 2000. Currently, there are 5,621 Palestinian political prisoners in Israeli jails. And almost everyone in the Gaza Strip is imprisoned: Israel withdrew its settlers and military in 2005 but maintained its occupation and strengthened its siege after Hamas won elections in 2006; that stranglehold is now also maintained by Egypt’s military dictatorship. Israel’s siege of Gaza is visible; its many sieges against West Bank cities and East Jerusalem are less so. In fact, most Palestinians are confined to one or more towns or villages in the West Bank, and the majority cannot go to Jerusalem. Gaza is almost completely sealed off to Palestinians from the West Bank and Jerusalem.

Second, it is clear that the PA is unable to protect Palestinian lives. On the contrary, the PA’s own security forces—trained, armed, and funded by US, European, and other international sources (as, indeed, is Israel’s occupation)—are part of the problem. Far from protecting Palestinians against Israel, the PA security forces effectively protect the Israeli military and settlers. And the security agencies lack accountability and oversight in both the West Bank and Gaza.

The third pressing reason for an international protection force is to shake off the US grip over Palestinians. Washington has for years paid lip service to a two-state solution, even as it has continued to arm Israel and use its veto power at the United Nations to prevent coordinated international action to end the occupation or hold Israel accountable for any of its illegal actions. Meanwhile, Israel has made a two-state solution all but impossible through its relentless efforts to seize as much Palestinian land as possible.

Things have reached such a pass that even PA President Mahmoud Abbas has been compelled to call on the UN “to provide international protection for the Palestinian people,” as he did in his September 30 speech to the General Assembly.

To be sure, this proposal is not without its pitfalls. In addition to the obstacles posed by Washington, such a protection force, if its parameters and duties are not clearly specified, could end up cementing the Israeli occupation, including the isolated Palestinian enclaves that Israel has created. It could also serve those in the PA who are happy to maintain the status quo, even if it means the emergence of a police state. For this reason, a protection force must be premised on the illegality of the Israeli occupation and on the long-established principles expressed in previous UN Security Council resolutions, specifically 242 and 338, which emphasize the inadmissability of acquiring territory through war.

Despite the clear obstacles, we believe that an international protection force is doable, and that even the United States may be brought to see its advantages. For one thing, the mechanics are tried and tested: In East Timor in the late 1990s, the UN Security Council authorized a temporary international protection force fully responsible for administration, security, and law and order. Within three years, East Timor secured its independence following decades of brutal military occupation by Indonesia. The Security Council should authorize a similar protection force for Palestine with the clearly expressed mission of bringing freedom to Palestinians.

Palestinian civil society and the international solidarity movement have both reached a point of strength and maturity not seen since the first intifada of the late 1980s. In the United States, solidarity groups are making inroads into AIPAC’s traditional arenas on Capitol Hill, particularly in the Democratic Party. This growing movement should do everything it can to prevent Washington from vetoing an international protection force or from using it to cement a sellout of Palestinian rights.

There are other reasons why the international community and Israel should take this proposal very seriously. Abbas is in his 80s, and there is no political mechanism for a transition of power. Palestinians will soon be facing political chaos, and Israel might be forced to do its own dirty work by directly managing its occupation, as it did in the pre–Oslo Accord days. This would surely be a burden not only for Israel but for any US administration, which will find it increasingly difficult to defend its support of the Israeli occupation in the eyes of Europe, the Arab peoples, and the American public.

The European Union should actively promote such a proposal, given that it funds much of Palestine’s social and economic development—the work that Israel, as the occupying force, should be doing. The EU is now experiencing firsthand—as well as paying for—the human cost of the failed policies and military interventions in Iraq, Afghanistan, Libya, and Syria.

As for the Palestinian leadership, it should also recognize that such a move would not weaken its “authority”; on the contrary, it would strengthen it and help provide a path to liberation. As many more countries are now formally recognizing Palestine, the Palestinian leadership needs a mechanism for transforming that recognition into independence.

Israel has often stated that it wants peace with the Palestinians. Let that claim be put to the test. While a political solution remains elusive at present, an international protection force will ensure that lives are placed above politics. Such a force would not only protect Palestinians but could also address security issues for all concerned, until a just and lasting peace agreement can be reached. With such a mechanism in place, a political solution may be achieved; without one, Palestinians will remain at Israel’s mercy, and peace will move ever further from  our grasp.