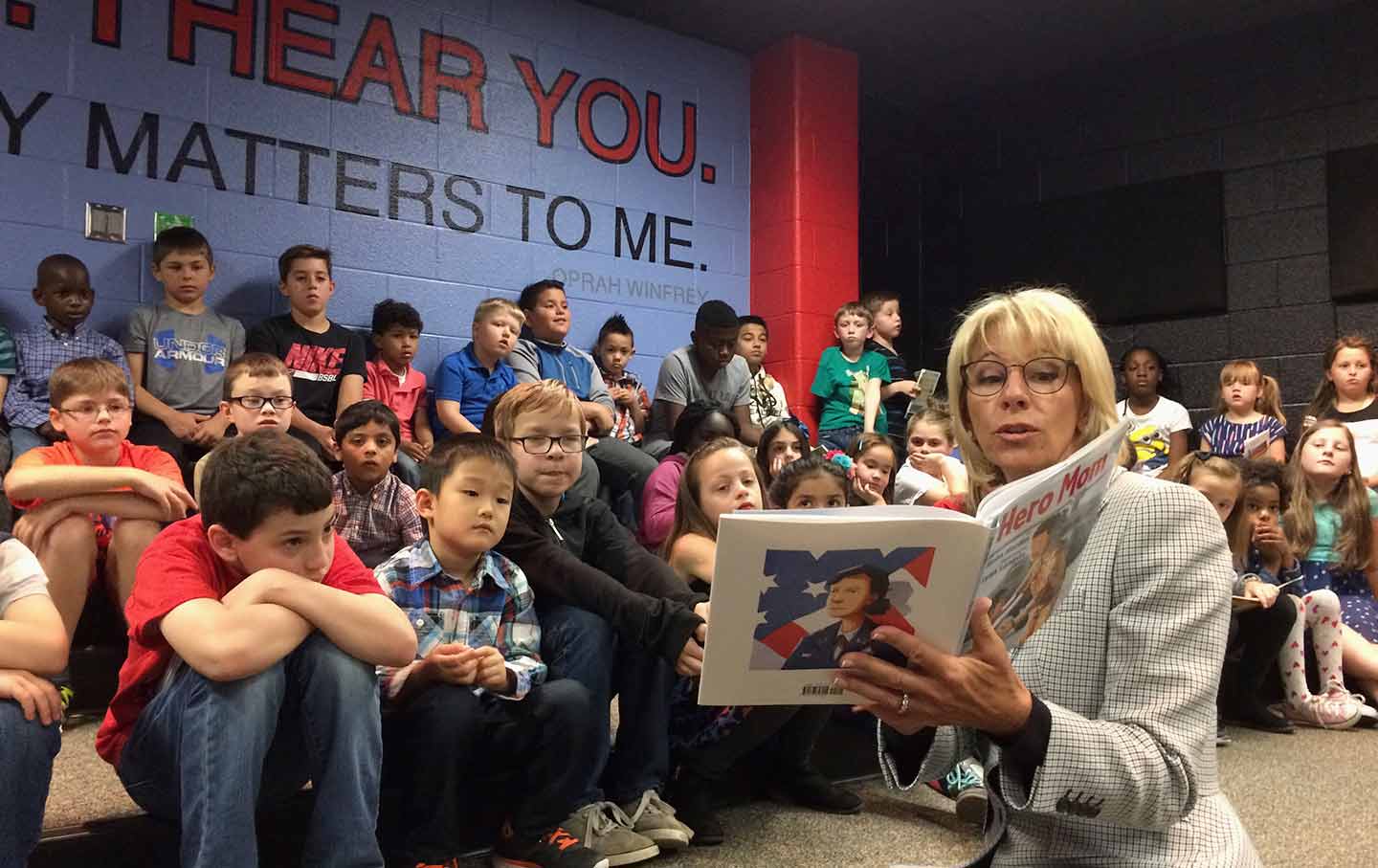 When black students marched nervously to their new classrooms during the first days of integrated public schools in the 1950s, the constitutional imperative of Brown v. Board of Education was fully behind them. But six decades on, public schools across the country seem to be marching backwards, and the Trump administration looks poised to claw them further back to the days of Jim Crow.1

Even before Trump took office, the nation’s schools were backsliding toward resegregation, despite, or even because, of the formal abolition of segregation through the courts. Last year, an audit by the Government Accountability Office on educational segregation patterns revealed dramatic growth in segregated schools nationwide—defined as having three-quarters of their students in poverty and of black and Latino descent—since 2000, with racial polarization of schools rising under both Bush and Obama from 9 percent to 16 percent of schools in 2014.2

“The new bill would help private citizens resist a pattern of corporatization of education policy in recent years.”

The resegregation trends spurred some progressive lawmakers to seek to reverse the erosion of Brown through the Equity and Inclusion Enforcement Act (EIEA). Recently reintroduced by Representatives John Conyers of Michigan and Bobby Scott of Virginia, the legislation would modify the Civil Rights Act to enable communities to resist resegregation in the same arena where Brown was won: the courtroom. The bill would create a private right of action for individual families to take schools and policymakers to court over funding decisions that result in discrimination by race, ethnicity, or national origin—particularly in “denial or exclusion of services; decreased, poor, or low quality services; unsafe services; and the denial of the opportunity to participate as a member of a planning or advisory body.” The bill would also establish civil-rights monitors to “ensure that every school has at least one employee to specifically carry out the responsibilities of the law,” backed by a special position in the Education Department “to coordinate and promote Title VI enforcement of equity and inclusion in education.”3

Altogether, the proposal would counter a 2001 Supreme Court ruling, Alexander v. Sandoval, that effectively stripped citizens of their right to bring civil suits against local funding policies that inflicted “disparate impact” based on race or ethnicity. The decision overturned longstanding equity-based statutes and left communities locked out of essential legal recourse against discrimination in school budgeting, transportation policy, and environmental regulations.4

The racial and social polarization of schools and students, which is linked to residential segregation and socioeconomic stratification in surrounding communities, deeply impacts issues like exposure to discipline, staffing levels, and, in some impoverished districts, basic access to supplies, books, and even classrooms, as overcrowded districts stuff kids into trailers and dilapidated school buildings crumble. Segregated schools also restrict academic progress. According to the audit, while seven in 10 richer schools offered advanced placement courses, less than half of poorer, blacker and browner schools do, and wealthier schools offer their already privileged students higher-grade coursework in core subjects in science and math.5

While hardly a radical change in civil-rights policy, the new bill would help private citizens resist a pattern of corporatization of education policy in recent years, centered on neoliberal reforms that exacerbate racial divides in educational opportunity. Racial divisions have deepened as districts have pushed for expanding standardized testing, shuttering and restructuring high-poverty schools deemed by federal authorities to be “underperforming,” and imposing equitable funding cuts that encourage the growth of privately sponsored charter schools and the “voucherization” of school funding in poor districts. Trump’s budget proposal would deepen these inequities by flattening already scarce federal funding for K-12 schools.6

“Back then, and now, segregation remains a story of not just legal bias but also economic injustice.”

The courts have also promoted resegregation by striking down policies that use race as a factor in distributing student enrollment, including mandatory transfer of students to integrated schools. Consequently, wealthier families in de facto segregated districts like Charlotte, North Carolina, now have greater latitude to flee to whiter, better-resourced school districts, depriving black and brown neighborhoods of the affirmative-action measures needed to avoid further academic marginalization.8

Just giving families the right to sue school districts won’t lead to the kind of radical redistribution of resources needed to undo two generations of resegregation. But legal action could, for example, hold districts accountable for depriving schools of English-language programs for immigrant kids, or challenge patterns of placing black kids disproportionately into special-education classes. Currently, the main recourse families have is filing a complaint with the Education Department’s Office of Civil Rights, an often drawn-out process with a groaning backlog of hundreds of cases.9

According to Philip Tegeler, head of the Poverty & Race Research Action Council, as structural discrimination becomes more institutionalized and avenues for legal recourse narrow, the EIEA proivides a common-sense restoration of a basic civil right.10

It’s clear that we can’t rely on the Trump Administration to vigorously enforce civil rights—but right now the only recourse for many victims of discrimination is by filing complaints with federal agencies. This bill would restore the ability of victims of discrimination by school districts and other recipients of federal funds to go to court to enforce their rights…. Returning these types of claims to the courts, as Congress originally intended, makes a lot of sense.11

The courtroom was where Brown anchored the principle of educational equity, and may well be where the question of modern-day segregation returns to redress the unfinished business of overcoming Jim Crow. Back then, and now, segregation remains a story of not just legal bias but also economic injustice.12

The Trump plutocracy, which treats wealth as a political instrument of social engineering, argues that diversity is helped by “market forces” and consumer choice for children’s education. In reality, letting the markets sort students by race and income simply replaces formal racial bias with entrenched class hierarchy. The racism built into the social edifice of today’s schools exposes the stark lessons never learned from “separate but equal.”13