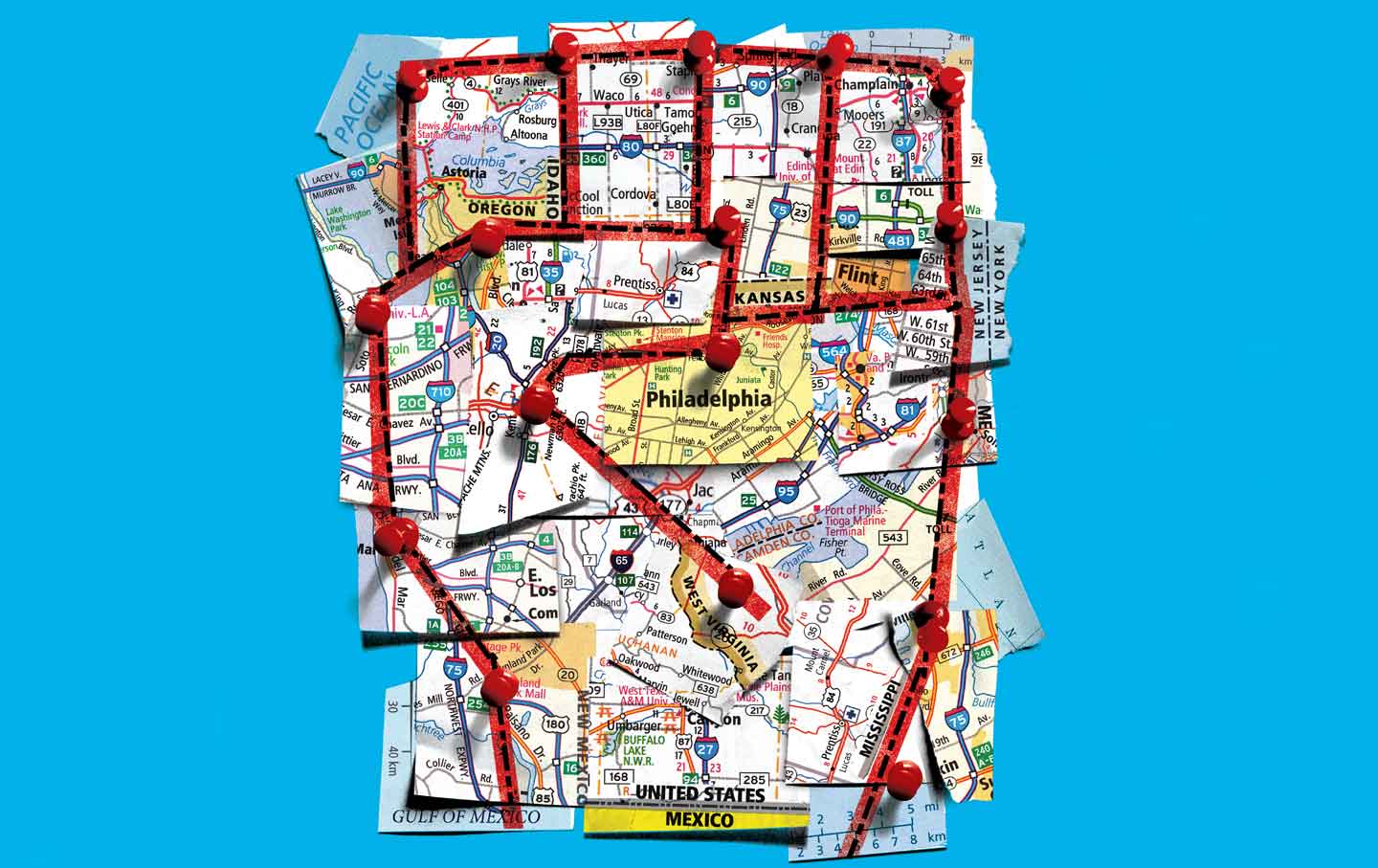 In this week’s issue, we asked a group of progressive activists and leaders to reflect on how to keep the political revolution—one sparked by movements and reflected in the Sanders campaign—alive and kicking. Vote Green! said Kshama Sawant. Organize local electoral power, offered several contributors. Build independent social movements, argued Naomi Klein. We also asked you, our readers, to weigh in. We received hundreds of responses—from pragmatic to idealistic, single-issue to multi-platform—and we offer a sampling of those ideas here.

We Still Need a Future to Believe In

Norman Lear: Bernie Sanders has proven that there is no substitute for being 100 percent one’s self and for working one’s ass off to present that self wherever, whenever, to anyone and everyone who’ll listen. What John Lewis did on the floor of Congress—staging a sit-in for gun control—was another example of that. What Elizabeth Warren does day in and day out is another example of the same. At our essence, we liberals are the true conservatives. You will not mess with our Bill of Rights, our Constitution, our Declaration—those words that guarantee to all equal opportunity and equal justice under the law.

Rosemary Kean: Bernie’s key problem was not reaching out to black voters. If he had, he would be the nominee. Although Black Lives Matter tried to wake him up, Bernie didn’t stay woke. Antiracism has to be a key policy for any party hoping to move beyond too little health care,  deteriorating schools, lack of affordable housing, and endless war.

Robert Stoll: To continue this revolution, progressives need to stay engaged and push forward. They need to vote not only in primaries, but also in the general and subsequent elections. This will be a challenge, because young people typically do not have high voter turnout and frequently give up when they are not immediately successful. Young people will stay engaged if there is authentic hope for the future, with some successes along the way. People are primarily driven by economics, so strategies for short-term policy successes after election day should be focused in those areas, such as massive student loan restructuring or forgiveness, paid by “excess profits” taxes.

Homer Connor: Progressive organizations such as Planned Parenthood, NARAL, Sierra Club, etc. need to form a unifying organization as corporations have done with the American Legislative Exchange Council. This organization would be able to have more influence on Congress than many separate organizations.

Susan Adelman: Our role and the issues we address will be vastly different depending on who wins the presidential election. There is, however, a constant: the protofascist, racist, misogynist sentiment, which has been nurtured—sometimes overtly, sometimes covertly—by Republicans for decades. While I understand there are other factors coalescing around Trump, I believe this to be the most dangerous. And I believe the progressive movement underestimated the strength of this sentiment. We were largely unprepared to peacefully and creatively counter it, and we didn’t celebrate Obama when there were opportunities to do so.

If Clinton is elected, she will represent yet another historic first for the nation. We must have a clear understanding that Republicans will attempt to do to her exactly what they did to Obama. We should push hard but not mistake compromise for defeat on mass incarceration (21st-century slavery), immigrant rights, a living wage for all workers, and voting rights.

We may have to mount a massive peace movement—Clinton certainly doesn’t appear to be a peace candidate—but we truly have no idea what she will do, because we have never had a woman president. She just might surprise us. Remember that famous Republican—Earl Warren!

Alan Michaels: Bernie’s campaign demonstrated that the Democratic Party is hostile territory for reformers. Americans who want social-democratic programs on par with advanced economies will need to fight for them outside the ballot box. Socialists and progressives must commit to the long work of building a political alternative to the Democratic Party. This alternative will find its base and its accountability in working-class social movements. It must reject corporate funding in favor of dedicated, issue-based organizing work.

Following the example of Kshama Sawant in Seattle, winning this program requires an “inside-outside” strategy. Inside political institutions, leftists can win local offices. Starting with city councils, young leaders can gradually consolidate their gains, eventually reaching national status. Utilizing the Green Party’s ballot access may be helpful here, though I would encourage an explicitly anticapitalist, socialist platform. Outside strategy involves protests, marches, direct action, and other creative methods for winning reforms. Marrying these two components, the left can win lasting change without the corruption of corporate influence.

Marjorie Gross: Bernie Sanders has given us hope that it is possible for America to once more be a country by the people and for the people, a concept that has been lost over the years. I recall when John Kennedy was running for president and the frequently heard comment was that “a Catholic didn’t stand a chance.” The parameters for a presidential candidate were very narrow.

What is most impressive today is the absence of focus on race, religion, or gender. We must further equalize the playing field by eliminating personal wealth as an advantage. It should be possible for qualified, intelligent candidates to enter the field, if they so desire, by the government equally subsidizing realistic candidates and limiting campaign time to a few months.

To ensure that our youth are able to reach their potential, it is absolutely necessary to eliminate student debt by providing free, quality education to all who desire it. Furthermore, it is unconscionable for any person or organization to get rich off the poor health of others. We have the shameful distinction of being the only so-called civilized nation whose health system assures this travesty. This must end!

Michael Moore’s film Where to Invade Next shows that there is a reasonable solution for each of our social ills. All we have to do is downsize (I won’t even suggest eliminate) greed and corruption! Thank you, Bernie, for showing us a new path!

John Danehy: First, a public option for the Affordable Care Act. If it works, it will lead to a single-payer system. It’s probably the only path to that goal. Second, overturn Citizens United. Money in politics is corrupting our democracy. Third, ban assault weapons and close background-check loopholes. Fourth, alternative-energy revolution now. Fossil-fuel free by 2050. It can be done.

Cora Weiss: There is no alternative to organizing: getting candidates to run for school boards, city councils, state legislatures, and Congress. We need to keep the issues that Bernie has brought to the approval of huge numbers alive. Keep writing, speaking, campaigning about college debt, inequality, health care, and diplomatic resolutions of major disagreements, not militaristic ones which don’t resolve problems. The US is ranked 103rd on the list of most peaceful countries. Shameful. It is up a tad because of our opening to Cuba and the Iran deal. It indicates the successful role of diplomacy!

Yolanda Gonzalez: The political revolution must be powered by mobilizing people of color and the disenfranchised poor. As a woman of color, an activist, and educator of socioeconomically challenged students for 25 years, I herein petition all progressives to essentially look at the makeup of their efforts. The political revolution will be a sham if it is solely powered by well-meaning white progressive liberals.

Anita Jordan: It has to happen incrementally. American voters are not ready to totally embrace European socialism. No matter how much progressives want that, voters are center-right. My biggest fear about the Democratic Party’s embracing a far-left agenda is that we would lose the presidency and even more seats in Congress. For example, most voters still don’t like the Affordable Care Act, so does anyone think they’d support Medicare for all? Free college, when most voters are dead set against “entitlement”? There are some ridiculous, irrational notions out there on the center and far right, I know. I just don’t think we can bolt to the far left now and have any success. We can’t even get Democrats to vote in non-presidential elections. Slow but steady wins the game. You won’t like my answers, but I am a realist. All the “pie in the sky” stuff, if adopted by the party, would mean losing the election big-time, which I am against. I’m unwilling to be hoist by my own petard.