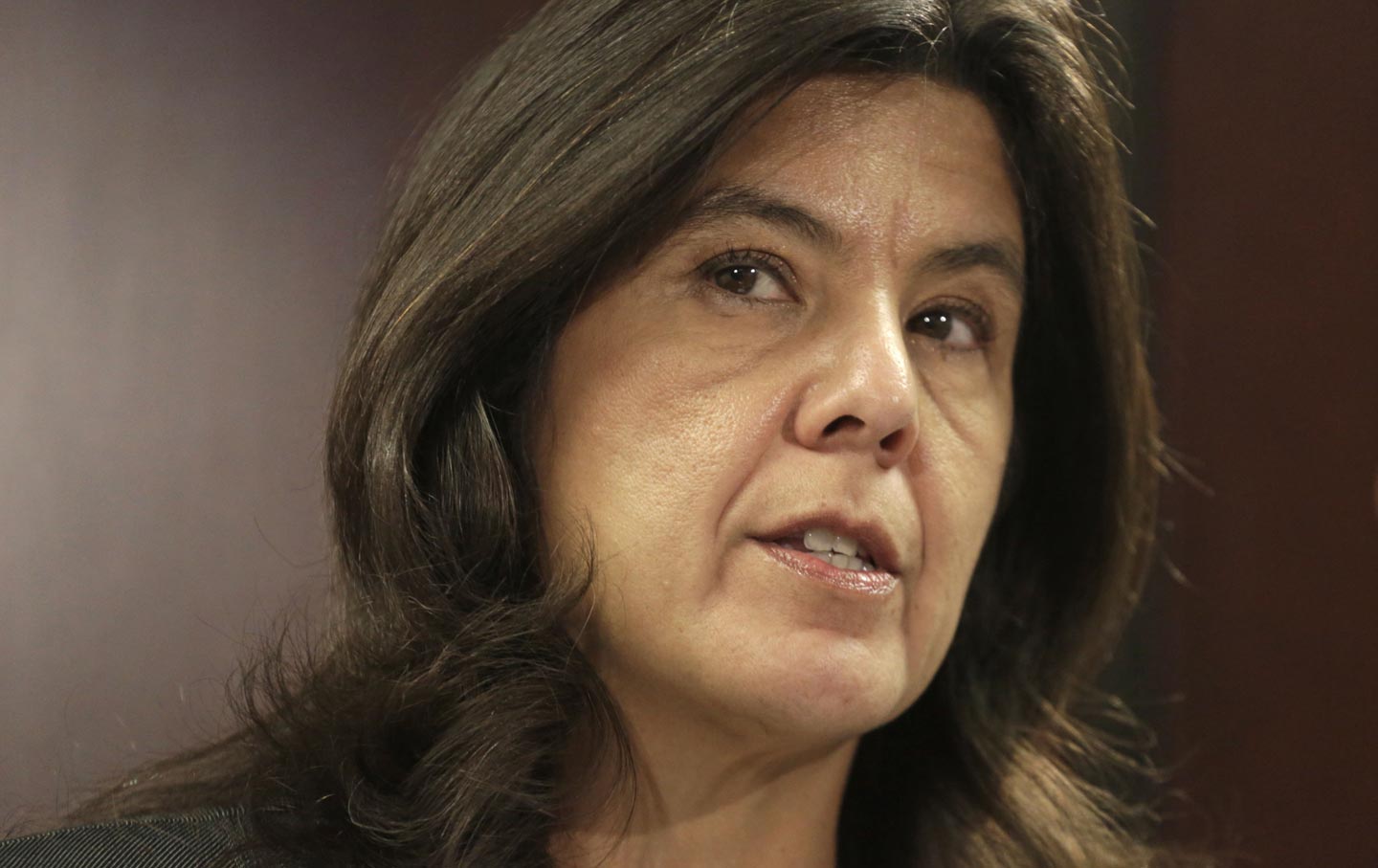 The knockout defeat of Cook County, Illinois’s State’s Attorney Anita Alvarez sends a strong message to prosecutors across the country: You will be held accountable if you don’t charge police officers who abuse their authority.

This article was produced in collaboration with The Chicago Reporter, a nonprofit investigative news organization that focuses on race, poverty and income inequality. Data Editor Matt Kiefer contributed to this report.

Alvarez was defeated by Kim Foxx, a former assistant state’s attorney who was endorsed by the county’s powerful Democratic Party and benefited from a grassroots movement to oust the two-term incumbent. Her victory in the primary virtually guarantees her election in November. If elected, she will be the first African-American woman to hold this position.

Tuesday’s race in a city in the throes of a police scandal was viewed by many as a referendum on police misconduct, particularly officer-involved shootings of low-income people and people of color. The contest captured national attention and attracted hundreds of thousands of dollars from out-of-state donors, including billionaire philanthropist George Soros, who contributed $333,000 to a PAC that backed Foxx.

Alvarez, who oversees the second-largest prosecutor’s office in the country, came under fire for the way she handled high-profile officer-involved shootings, especially two. She waited almost two years to charge Dante Servin for the fatal shooting of 22-year-old Rekia Boyd in 2012. Servin was the first Chicago cop in 20 years to be prosecuted for killing a civilian. A judge later threw out the case, saying that Alvarez had mishandled it. Alvarez was also criticized for waiting 13 months to charge a white police officer for shooting African-American teenager Laquan McDonald 16 times in 2014.

She wasn’t the only prosecutor at the center of a police scandal who was rejected by voters on Tuesday. In Ohio, Cuyahoga County Prosecutor Tim McGinty lost his reelection bid in the Democratic primary. McGinty was criticized for not charging two Cleveland police officers in the fatal shooting of 12-year-old Tamir Rice in 2014.

She won all 18 of the city’s majority black wards, five of the 13 majority Latino wards, and 11 of the 15 majority white wards, including the North Side neighborhoods that are home to the city’s so-called lakefront liberals.

“It wasn’t close, but a real sweep,” said Dick Simpson, professor of political science at University of Illinois at Chicago.

Foxx won much larger majorities on the predominantly black South and West sides than she did on the North Side.

A racial breakdown of the county vote was not available late Wednesday. But Foxx, who lives in south suburban Flossmoor, could have benefited from the black vote in the county, too. At 1.3 million, Cook has the largest black population of any county in the nation, according to the most recent Census data.

“This result can be interpreted as a part of a growing progressive electoral movement here in Chicago, and in other cities, which is focusing on grassroots organizing in low-level races to build momentum and put progressives in winnable offices, and progressive opposition to some of Mayor [Rahm] Emanuel’s policies, which are not responsive to much of Chicago,” said Thomas Ogorzalek, assistant professor of political science and urban studies and codirector of the Chicago Democracy Project at Northwestern University.

The big issue was the McDonald fatal shooting, Simpson said.

“It’s not even that everybody knew all the details of the [state’s attorney] race or the particulars of the office, but they knew they didn’t want Anita Alvarez,” he said.

The handling of the McDonald case put a spotlight on Alvarez and the importance of her job, a position to which many people hadn’t given much attention.

Typically, people cast more votes for races at the top of the ballot. The fact that voters went down the ballot to support Foxx shows that the race was important, Ogorzalek said. Roll-off for the race—that is, number of people who didn’t cast votes down ballot—dropped by about half compared with 2008, the last time there was a contested primary for state’s attorney. Ogorzalek said roll-off was low everywhere, but especially on the far South Side, where Foxx’s support was extremely high.

The prominence of the #ByeAnita hashtag also showed the power of social media in educating voters about the obscure but important local offices that can affect their lives more directly than national positions, he said.

Although activists fought to oust Alvarez, many did not endorse Foxx.

“The #ByeAnita campaign celebrated last night,” Black Lives Matter activists said in a news release Wednesday. “Not because Kim Foxx won, but because Anita Alvarez lost. Due to her essential role in the cover-up of Laquan McDonald’s murder, young black organizers relentlessly targeted Alvarez’s campaign for reelection in the final weeks. Not because we support Kim Foxx, but because Anita Alvarez is a prosecutor who has demonstrated that she does not believe Black Lives Matter.”

Activists and supporters of police reform say they will continue to advocate for change on multiple fronts:

An elected police accountability council would include neighborhood residents representing every police district in the city. The council would investigate all complaints of police misconduct, among other things. A coalition of 50 groups has gathered over 30,000 signatures to submit to the City Council this summer, said Frank Chapman, ed­ucation director and field organizer for the Chicago Alliance Against Racist and Political Repression, which is leading the campaign. Three aldermen have agreed to sponsor the ordinance.

A coalition of organizations led by Community Renewal Society, publisher of The Chicago Reporter, has proposed a FAIR COPS ordinance, which would create an office of police auditor to oversee the Chicago Police Department. The auditor, a civilian position, would monitor the department for compliance with policies on excessive force, pedestrian and traffic stops, frisks and searches. The auditor also would oversee the work of the Independent Police Review Authority and Chicago Police Board, analyze policing patterns and trends, and ensure fairness, transparency and consistency.

Making police dash cam and other videos public has been the focus of efforts at City Hall and in the Illinois General Assembly. SB 2210, sponsored by state Senator Patricia Van Pelt, a Chicago Democrat, would require that videos and other materials or documents related to officer-involved shootings be subject to the Freedom of Information Act, except when an exemption is approved by a judge.

In February, the city’s new Police Accountability Task Force recommended that evidence in police-involved shootings and other serious incidents, including photos, videos, and audio recordings, be released to the public within 60 to 90 days of an incident. Mayor Rahm Emanuel embraced the recommendations. But some Chicagoans criticized the policy for not going far enough.

Van Pelt introduced Senate Bill 2233, which requires that all records in cases involving alleged police misconduct be maintained indefinitely in order to identify patterns of abuse. Currently, records are destroyed after so many years, based on the nature of the allegations.

She also introduced Senate Bill 2370, which requires that all minors be represented by an attorney whenever they are interrogated by police. Under the bill, statements made by a minor when legal counsel is not present would be inadmissible in juvenile or adult court proceedings.

Last summer, Governor Bruce Rauner signed a package of reforms, introduced by State Senator Kwame Raoul and State Representative Elgie Sims, both Chicago Democrats, that banned choke holds, established rules for the use of police body cameras, and required independent investigations of officer-involved deaths. Law enforcement officers also will have to collect more data related to their use of stop-and-frisk tactics.