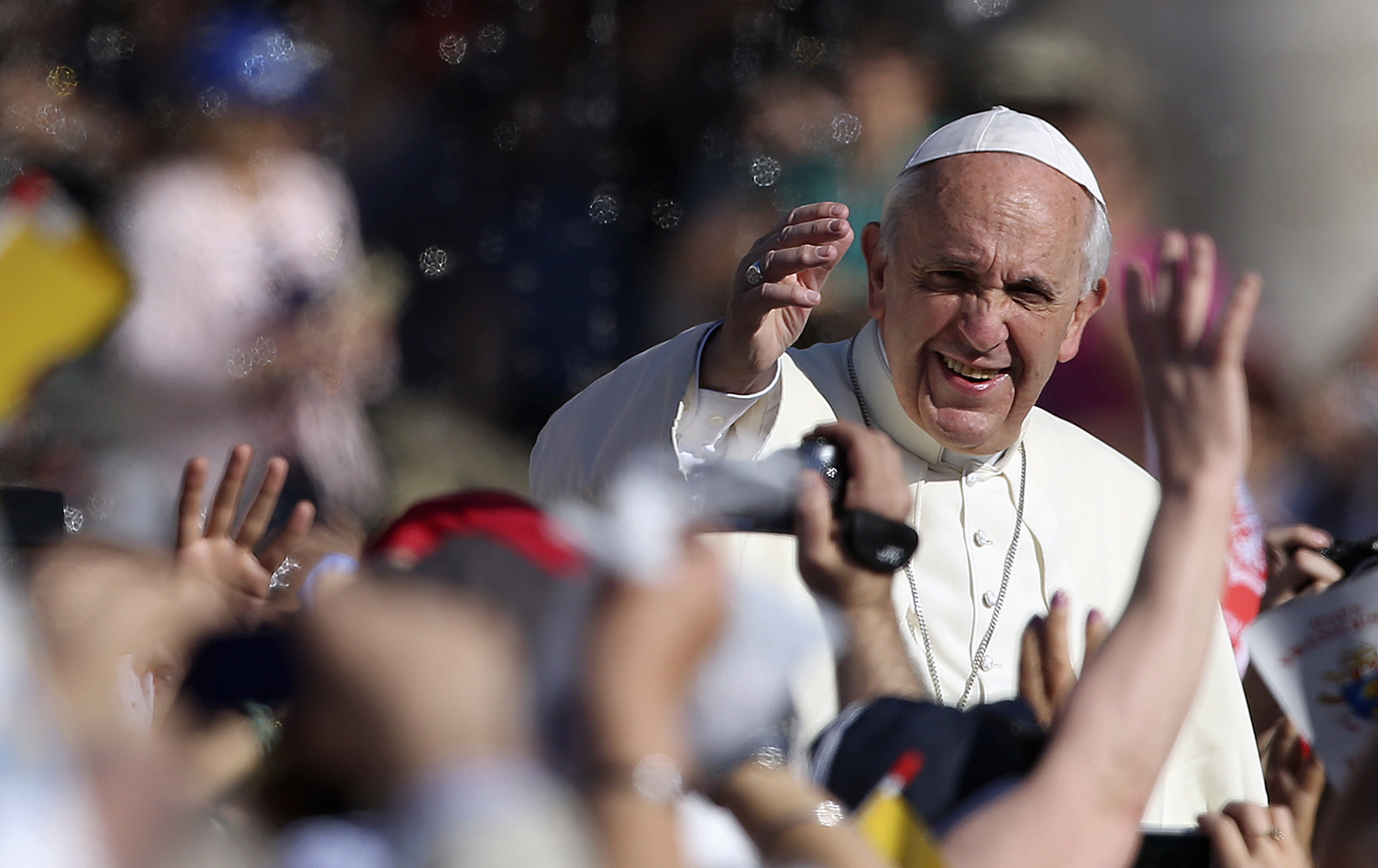 Jeb Bush may not be very good at running for president. But he has a remarkable talent for wedging his foot in his mouth.

The former front-runner in the race for the Republican presidential nomination—who struggles to get above single digits in the polls—has frequently played the fool on the 2016 campaign trail.

But he will have a hard time topping his argument against accepting Pope Francis’ counsel on the need to fight climate change. After the pontiff urged members of Congress to engage with the rest of the world in “courageous actions and strategies” to combat global warming, Bush declared that the pope’s call should be disregarded.

Why? Because, Bush announced, “He’s not a scientist, he’s a religious leader.”

Bush, who is Catholic and who has attended mass with Pope Francis, needs to study up on the pontiff’s background in science. And on the rigorous research that underpins the pope’s advocacy on climate-change issues.

Before he chose to pursue the priesthood, the future pope trained as a chemical technician. Writers for the National Catholic Reporter reference “his training as a scientist” and point out that the young Jorge Mario Bergoglio “worked as a chemist prior to entering the seminary.”

Before he chose to pursue the priesthood, the future pope trained as a chemical technician.

Forbes went so far as to headline a 2013 assessment of the new leader of the Catholic Church “Pope Francis, Scientist.” Alex Knapp, a writer for the magazine on science and technology issues, explained that, “From the numerous profiles that I’ve read of the new Pope, it doesn’t appear that he pursued the sciences after becoming a priest. Still, it’s encouraging to know that he has that background. That’s because that knowledge of science will help face many of the challenges facing the Church—many of which have to do with the new ethical terrain that has to be traveled in the wake of new technologies and discoveries.”

Purdue researchers led a survey of nearly 700 scientists, which found “that consensus on human-caused climate change extends beyond climate scientists to the broader scientific community.” Linda Prokopy, a professor of natural-resource social science, explained, “Our survey indicates that an overwhelming majority of scientists across disciplines believe in anthropogenic climate change, are highly certain of these beliefs and find climate science to be credible. Our results also suggest that scientists who are climate change skeptics are well in the minority.”

The views expressed by Pope Francis are entirely within the scientific mainstream. And influenced by that mainstream.

When this year’s papal encyclical on climate change and other issues was being developed, leading scientists were consulted about the physical causes of climate change. Indeed, notes Nature, the international weekly journal of science, “never before has a pope drawn so resolutely from science” as did this pope in the preparation of this encyclical.

“To be sure, Laudato si’ (Praise Be) is a faith-based document that views Earth as God’s creation, something for humans to ‘fill and subdue.’ But science is remarkably prominent in the letter,” observed the writers for Nature. “The Pope proclaims in no uncertain terms that the climate change now underway is caused by human activity and that the burning of fossil fuels must stop.”

That sentiment bothers Jeb Bush—and other Republican resisters of reality, skeptics, and doubters like 2016 contender Rick Santorum (who says the pope should “leave science to the scientists”).

Bush says, “Put aside Pope Francis on the subject of any political conversation.”

This is where Bush is at his most foolhardy.

The debate about climate change is more than a “political conversation.”

It is an urgent examination of what can and must be done to protect the planet and humanity.

Scientists and religious leaders who consult scientists should be heard—and heeded.

If anyone is to be “put aside” in this debate, it is Jeb Bush.