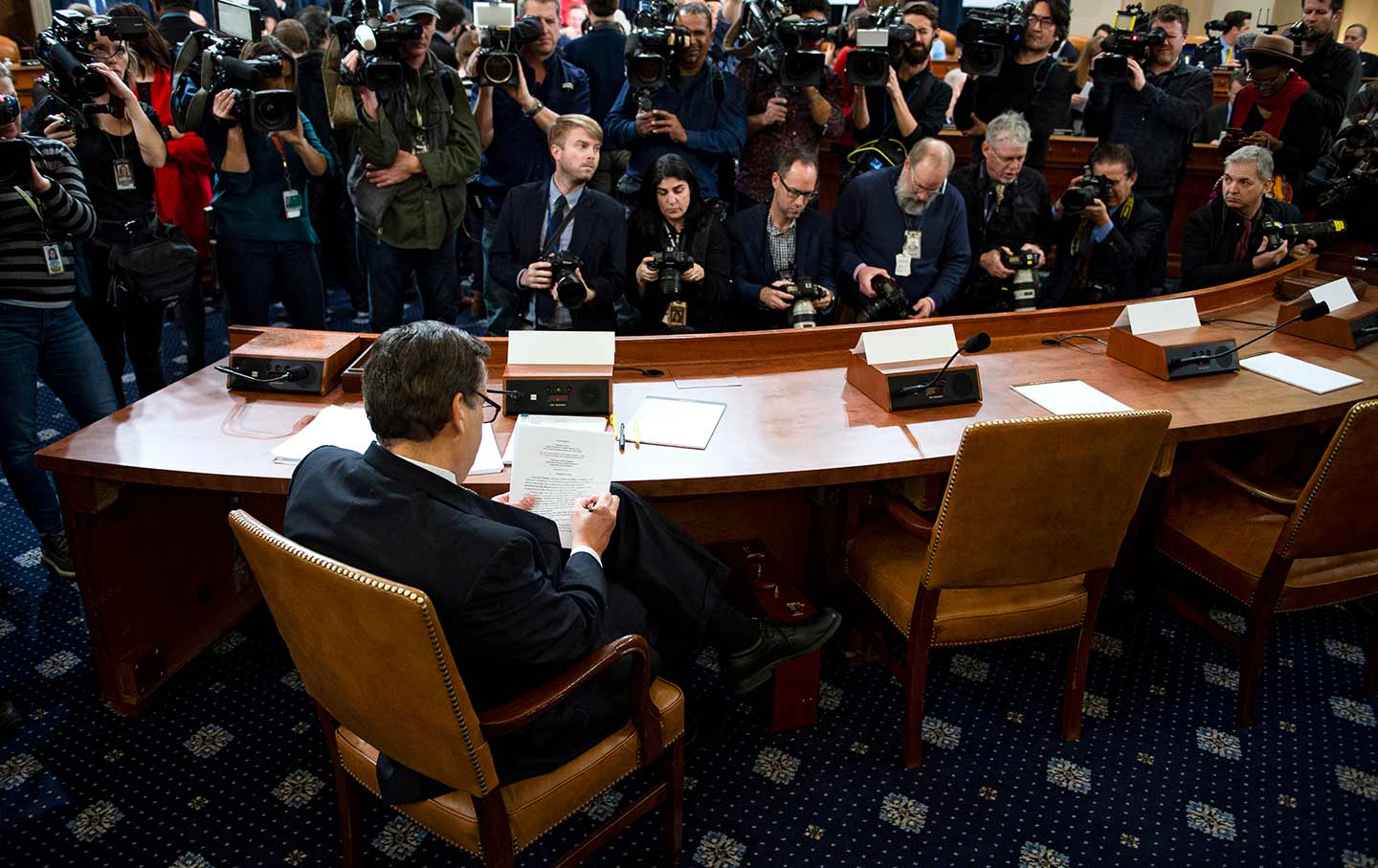 During an extraordinary House Judiciary Committee hearing on Wednesday, chairman Jerry Nadler framed his committee’s critical responsibility in the impeachment inquiry in terms significantly broader than the narrow consideration of President Trump’s pressuring of Ukraine to help him beat Joe Biden in the 2020 election.

Yes, of course, what Nadler described as “a concerted effort by the President, and by his men, to solicit a personal advantage in the next election”—with a scheme to get a foreign country to go after a rival—is an impeachable offense.

But it is not the sole impeachable offense that the committee is required to consider, as the New York Democrat acknowledged in his opening statement:

“When Congress found out about this scheme and began to investigate, President Trump took extraordinary and unprecedented steps to cover up his efforts and to withhold evidence from the investigators. And when witnesses disobeyed him—when career professionals came forward and told us the truth—he attacked them viciously, calling them traitors and liars, promising that they will ‘go through some things.’”

The chairman’s focus on Trump’s obstructions of Congress—along with his obstructions of justice and related abuses of power—signals an important turn in an impeachment inquiry that must not be narrowly focused on the Ukraine imbroglio. The inquiry must recognize this president’s extreme disregard for the system of checks and balances as outlined in the Constitution, as Nadler recognized on Wednesday.

“No other president has vowed to quote ‘fight all of the subpoenas,’  as President Trump has promised.

“In the 1974 impeachment proceedings, President Nixon produced dozens of recordings. In 1998, President Clinton physically gave his blood. President Trump, by contrast, has refused to produce a single document and directed every witness not to testify. Those are the facts before us.”

And those facts point to the conclusion of Stanford Law School professor Pamela Karlan, a former US deputy assistant attorney general, who told the committee,

“What has happened in the case today is something that I do not think we have ever seen before: a president who has doubled down on violating his oath to faithfully execute the laws and to protect and defend the Constitution.”

Trump’s violations are many. Some open fresh areas of concern. But this president’s obstructions of a congressional inquiry renew an old concern.

In the summer of 1974, when the House Judiciary Committee was preparing to vote on articles of impeachment, Representative Robert Kastenmeier declared, “President Nixon’s conduct in office is a case history of the abuse of presidential power.” He was focusing not just on the high crimes and misdemeanors, but also on the president’s cover-up. Kastenmeier, who left the committee in 1991 and passed away in 2015, at age 91, would undoubtedly remind his successors to pay close attention to Trump’s attempts to meddle with, undermine, and prevent the current inquiry.

Nixon and Trump are, to be sure, different figures in our history. The former had served in the House, the Senate, and as vice president. He knew the ways of Washington and thought he could game the process, but, like Trump, he got caught when his own aides began to testify against him, revealing, in the words of former Nixon White House counsel John Dean, “a cancer growing on the presidency.” And that cancer extends from any presidential effort to obstruct legitimate investigations into wrongdoing by the executive poses a threat to the presidency itself, the system of checks and balances, and the Constitution.

The first article of impeachment against Nixon recognized this:

It was well understood then—among both Republicans and Democrats—that “interfering or endeavoring to interfere with the conduct of investigations” of alleged wrongdoing by a president and those around him constituted an impeachable offense. And it should be well understood now.

If a president can get away with obstructing an inquiry, he can avoid accountability. And if that happens, the system of checks and balances collapses.

Kastenmeier made this point regarding the Nixon White House’s refusal to cooperate with congressional subpoenas: “Without the power to subpoena papers, materials, things necessary, the Congress cannot meet its constitutional responsibilities. I submit that for the chief magistrate to prevent the Congress from meeting its congressional duty, its constitutional duty, is no different than when the president himself violates the Constitution. The offense is just as grave.”

During Wednesday’s hearing, Noah Feldman, the Felix Frankfurter Professor of Law at Harvard Law School, told the committee, “I don’t think it’s possible to emphasize this strongly enough: A president who will not cooperate in an impeachment inquiry is putting himself above the law. Now, putting yourself above the law as president is the core of an impeachable offense because if the president could not be impeached for that, he would in fact not be responsible to anybody.”

As the Judiciary Committee ponders the evidence, the members must look beyond the Ukraine scandal and consider all the issues raised by Trump’s refusals to cooperate, his witness tampering, and all the other evidence of obstruction.