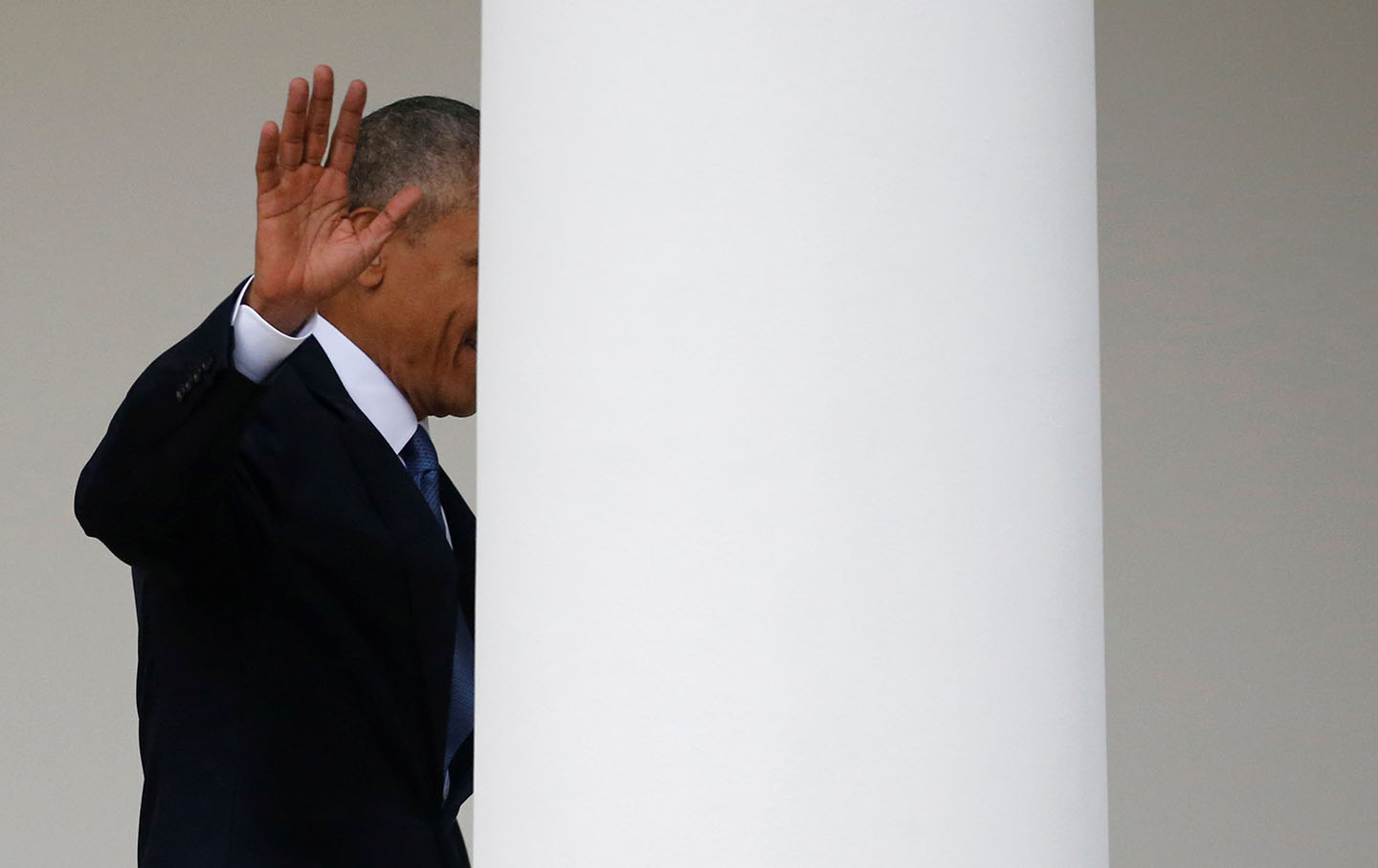 US President Barack Obama departs the Oval Office for the last time as sitting president, at the White House in Washington, DC, on January 20, 2017. (Reuters / Jonathan Ernst)

Call it a “Hail Mary” for the planet: On his way out of the White House, amid the transition to a stunningly anti-science administration, (now former) President Obama laid down a small milestone on the global path to climate justice. The administration’s last-minute $500 million payment this week into a major international environmental-finance agency, United Nations Green Climate Fund, represents one of the few concrete contributions the government has made toward implementing development projects mandated by the Paris Climate Deal.

The fund is just a fraction of Washington’s overall $3 billion pledge, which, despite GOP lawmakers’ efforts to derail the funding, has already been budgeted. But considering that the incoming president has vowed to kill the Paris Climate Deal while festooning his cabinet with fossil-fuel industry insiders and plutocrats, environmentalists simply hope that the $500 million contribution can be a kind of placeholder—sadly, it might have to last at least another four years.

Friends of the Earth US called the action “a powerful signal to the world that the Trump administration’s anti-science, anti-justice, pro-corporate approach to climate does not mean the people of the US aren’t going to continue standing up and demanding climate action.” But the award is only one-sixth of what environmental groups were hoping Obama would release, and even if this Congress had fully paid out its commitment, it’s barely denting the cost of transitioning to a zero-carbon energy system, which the federal government estimates could be as much as $44 trillion worldwide by 2050.

The UN has so far authorized just about $1.2 billion to 27 projects and programs in 39 countries. The goal is to spend $100 billion annually by 2020. Despite the slow start, new projects are starting to come online and making a difference: They include $10 million for Community-Based Natural Resource Management in Namibia and $53.5 million to cultivate sustainable landscapes in Madagascar.

But the fund is no panacea, not only because it remains perilously short of what’s needed, but also because the structure of the fund is still based on a system that is in part controlled by the gigantic financial institutions and governments that have historically driven the carbon economy. So there’s always a chance of participating countries’ facing unfair debt burdens or getting entangled with corrupt private investment entities.

Karen Orenstein of Friends of the Earth says, “The GCF is a staging ground for all sorts of fights on development finance and climate finance…. [Our] goal is to make sure it’s more of a force for good than a force for bad.” She noted that so far, the funds disbursed for adaptation projects has generally been in the form of grants, rather than loans, thus reducing the financial rescue incurred by the participating countries. And in principle at least, the UN-controlled loans are structured to operate separately, and more fairly, than traditional international finance structure, to avoid the kind of exploitation that’s been historically linked to entities like the World Bank.

From the start, the global climate negotiations from which the GCF emerged have been freighted with corporate interests, from the sponsorship of the event itself to the incorporation of multinationals and big banks in every aspect of the policies that governments have hammered out, including carbon pricing and “public-private partnerships” for building renewable capacity.

Since big polluters like the United States play a major role in control the fund’s governance, and big banks play a role in administering the programs, the GCF is at best an initial step toward the dramatic resource transfer from the wealthier to poorer countries that is required for a “just transition” to a sustainable energy system. It falls massively short of repaying what many call the “historical climate debt” owed by rich countries, which have benefited from carbon-fueled profits since the Industrial Revolution, to the communities now mired in the ecological mess the.

For example, one of the largest projects is an $80 million program to develop universal renewable energy access in Africa, administered by Deutsche Bank—an institution long associated with economic exploitation and human rights violations around the world.

But as an alternative to the World Bank, with its history of profiteering and corruption, the GCF at least offers a way to implement projects in otherwise capital-starved frontline countries.

According to Matthias Kroll of the World Future Council, an environmental think tank, private capital might be necessary to provide viable credit to communities for certain projects, such as those with a commercial return down the line. But “the core idea of the GCF was to channel the major part of [promised funds] in form of grants to the developing countries not in form of credits. It is important to stress this issue of the way how the climate finance should work. Private capital could (and should) only involved as a kind of co-finance of renewable energy project.”

More recently, small island nations like Kiribati have protested that they’ve been unfairly denied access the GCF directly due to their weak financial infrastructures. According to a UN analysis, although banks and international financial institutions continue to play a major role in financing “green” development projects in both the public and private sector in poverty-stricken countries, huge barriers to credit remain for many poor, environmentally devastated countries. In marginalized communities, a systemic lack of viable financial infrastructure could hamper energy transition and climate adaptation unless banking systems are made more inclusive. So tiny islands like Mauritius, which are racing against time just to stay above sea level, say that their plans for coping with climate change shouldn’t be hampered by structural impoverishment that in part stems directly from the destructiveness of fossil fuel industries.

Now, the global consensus around the need for urgent action on climate change is stronger than ever—yet the gap between US climate politics and the political tenor of the rest of the free world is wider than ever. And Obama’s contribution is vastly eclipsed by the gaps that the Trump administration is about to inherit. But the tiny payment opens one key question about an institution that is, while flawed, critical: in a polarized world, how we can rethink and reintegrate the politics of global finance to begin to settle a global debt?