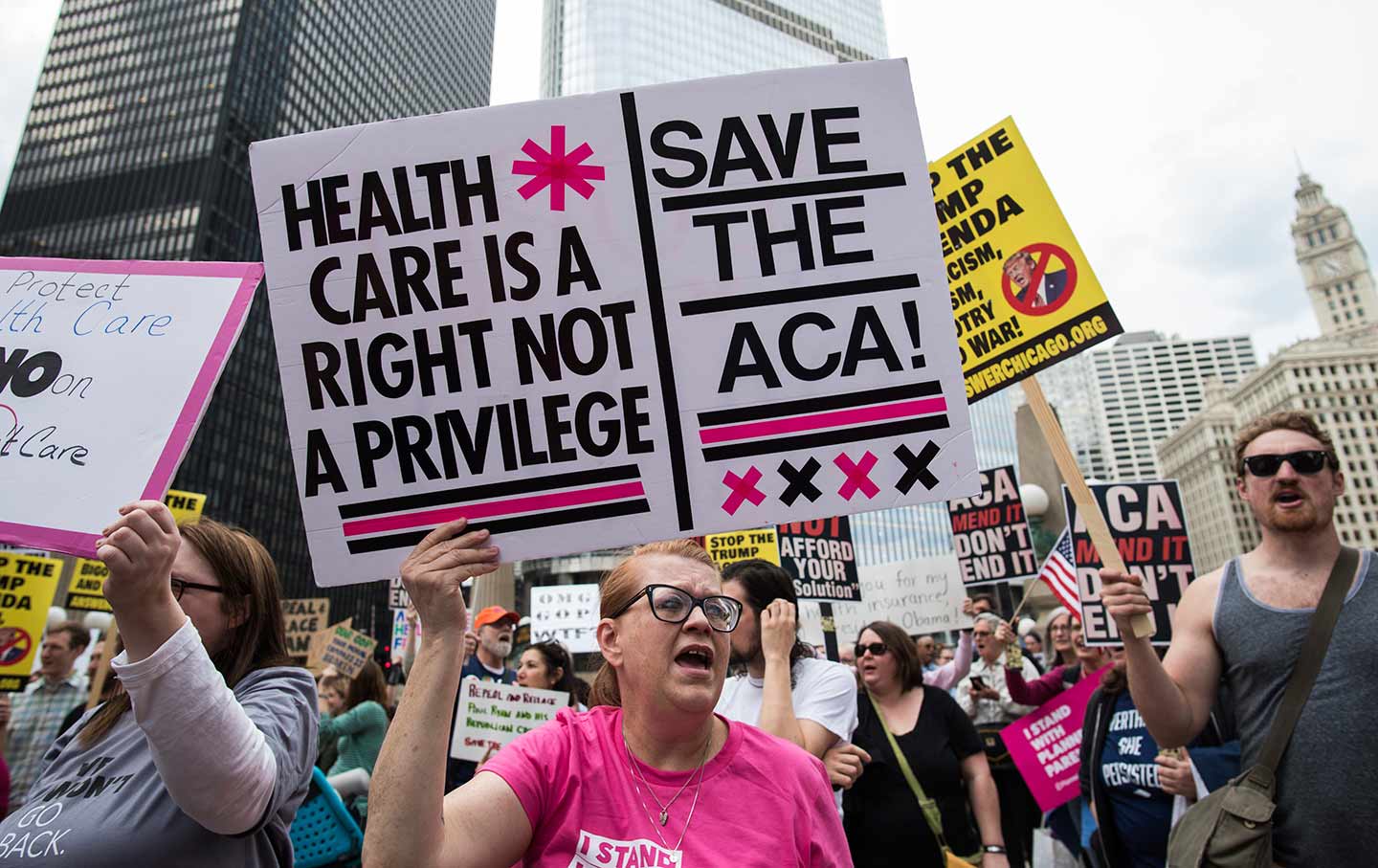 Demonstrators gather across from Trump International Hotel and Tower in Chicago to celebrate the Republican Party’s failure to repeal the Affordable Care Act, March 2017. (Max Herman / Sipa via AP Photo)

Ever since Congress in 2010 enacted the Affordable Care Act (ACA), President Barack Obama’s signature health-care legislation, those who lost the democratic fight over the law have turned to the courts, arguing that it is unconstitutional. Conservatives who long decried judicial activism have eagerly invited it on this subject. But until last Friday, the courts had turned them away—including the Supreme Court, which in 2012 upheld virtually all of the act against a constitutional challenge, invalidating only a provision that would have denied states federal Medicaid funding if they refused to expand health-care coverage for those who can’t afford it.

On Friday, the conservatives finally found the judicial activist they were seeking. Judge Reed O’Connor, a federal judge in Texas, declared the entire Affordable Care Act unconstitutional. President Trump, who has tried repeatedly to repeal the ACA without success, immediately called it a “big, big victory.” But it’s a “victory” that has no immediate effect, except to underscore the political dilemma the Republicans’ attack creates, given the overwhelming popularity of the act’s provisions barring insurance denials for those suffering from preexisting medical conditions. In any event, the decision is almost certain to be overturned on appeal.

One might reasonably wonder how a trial judge can declare the ACA unconstitutional after the Supreme Court has already ruled it valid. The act’s opponents—in this case, 20 Republican states—argued that an amendment to the ACA included in the Trump tax bill effectively required reversing the Supreme Court’s 2012 decision. They noted that when the Supreme Court upheld the ACA’s requirement that people purchase health insurance or pay a tax penalty, it deemed the provision a proper exercise of Congress’s power to impose taxes under the taxing clause. But in 2017, Congress zeroed out the tax penalty associated with the “individual mandate.” Since the law as amended no longer collected any tax, they reasoned, the individual mandate was no longer an exercise of the taxing power, and was therefore unconstitutional. And going further, they argued that because the individual mandate was essential to the ACA, the court should invalidate not just that single provision but the entire statute, including provisions that have no connection to the mandate at all, such as the expansion of Medicaid coverage for health insurance. Remarkably, Judge O’Connor agreed.

The court’s opinion, however, has two fundamental flaws. First, when Congress repealed the penalty for failing to purchase health-care insurance in 2017, it essentially rendered the provision optional. A “mandate” with no consequences for failing to adhere to it is no longer a mandate in any sense of the term. Rather, as Georgetown Law professor Martin Lederman has argued, the law now essentially offers citizens a choice. They can opt to purchase health insurance under the terms the law sets forth—or not. And it is far from clear why Congress can’t offer such a choice, much less how doing so actually injures anyone. Indeed, since the “mandate” is unenforceable, it seems entirely academic whether it is valid or not, as it has no effect on anyone. 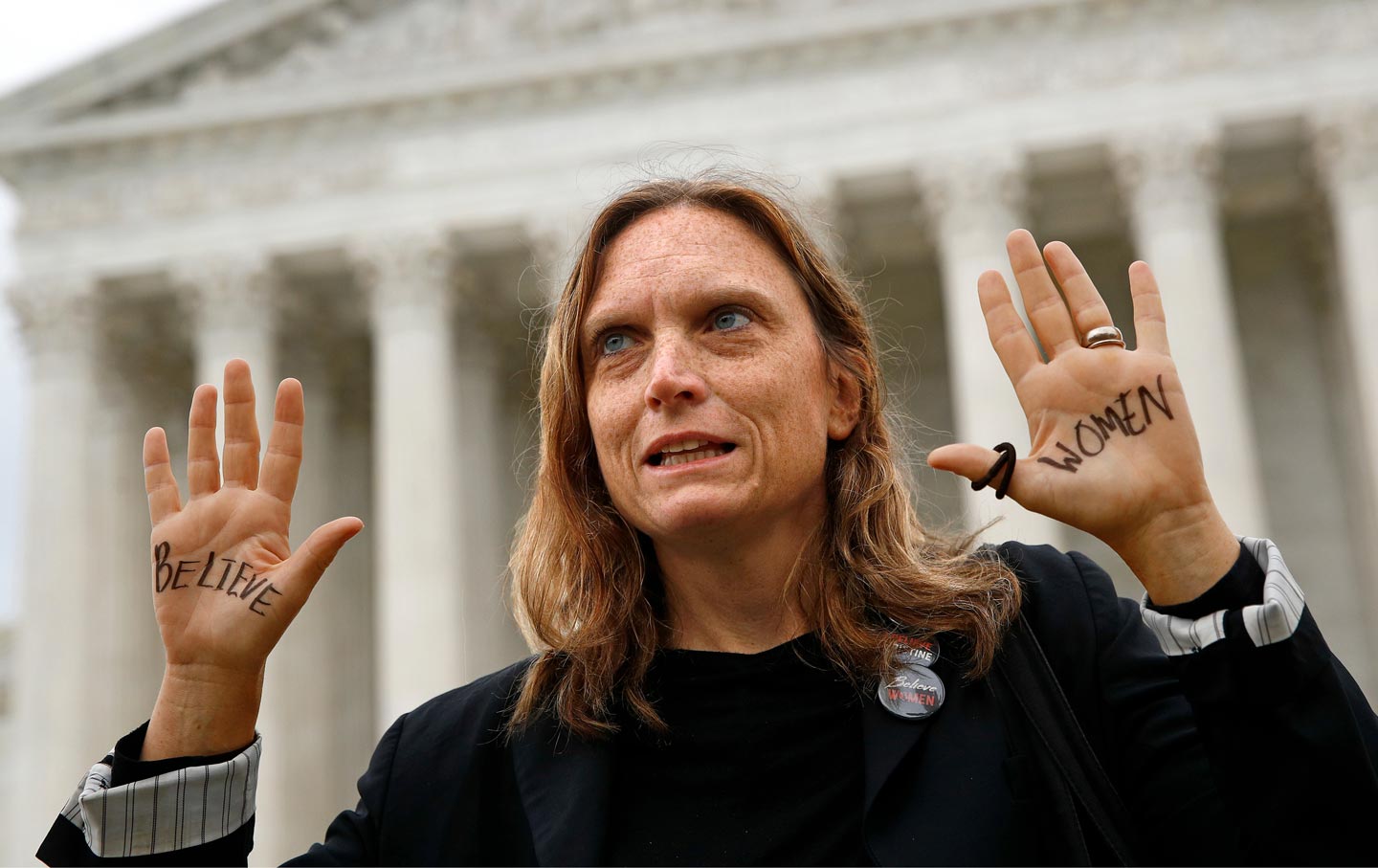 ‘All We’ve Got Are Protests and People Power’

The only reason anyone cares whether an unenforceable law is constitutional is the second part of the challengers’ argument, which the district court also erroneously accepted. The court reasoned that invalidating the “individual mandate” required it to declare unconstitutional not just that single provision but the entire ACA. This is the second fatal flaw in the court’s opinion.

It’s true that when courts deem a single provision of a broader law invalid, they must ask whether other provisions of the law should also fall. Under settled precedent, courts are generally obligated to invalidate only the particular provisions that are unconstitutional, leaving the rest of the law intact. But where a court concludes that Congress would not have passed other parts of the law without the invalidated provision, they are to strike down those provisions as well. It’s a question of congressional intent, and usually requires the judge to speculate as to how Congress would have responded to a different statute than the one it passed—a challenging counterfactual task under most circumstances.

In this case, however, no speculation was needed. It was Congress’s amendment in 2017 that, in the Texas court’s view, rendered the “individual mandate” invalid. So the question is whether the 2017 Congress that repealed only the tax penalty for the individual mandate, but changed nothing else in the ACA, would have wanted the entire statute to fall if the provision it rendered unenforceable were deemed invalid. The evidence on that is unequivocal: Congress could have repealed the entire ACA in 2017 (if it had the votes). But it didn’t. It chose to amend only one provision, leaving the rest of the law in place. And therefore the trial court should have done the same.

There were of course many in Congress who wanted to repeal the ACA entirely. But they were never able to summon sufficient votes to achieve that goal. Now, however, a federal court has done what the Republicans repeatedly could not. And it has done so by concluding, against all evidence, that a Congress that chose not to repeal the entire ACA, even as it rendered the individual mandate unenforceable, would have chosen to repeal the entire ACA without the mandate.

For the time being, the law remains in effect. The court “declared” the law invalid but declined the states’ request to issue an order barring its enforcement. A group of states that intervened to defend the statute because the Trump administration declined to do so have vowed that they will appeal. If the court of appeals follows precedent and common sense, it should reverse, and if it does so, that will be the end of this judicial frolic. If the Republicans want to end the ACA, take health insurance away from the more than 17 million people who have gained coverage under the act, and allow insurance providers to turn away those suffering from pre-existing conditions, they will have to do so politically, not through the courts.