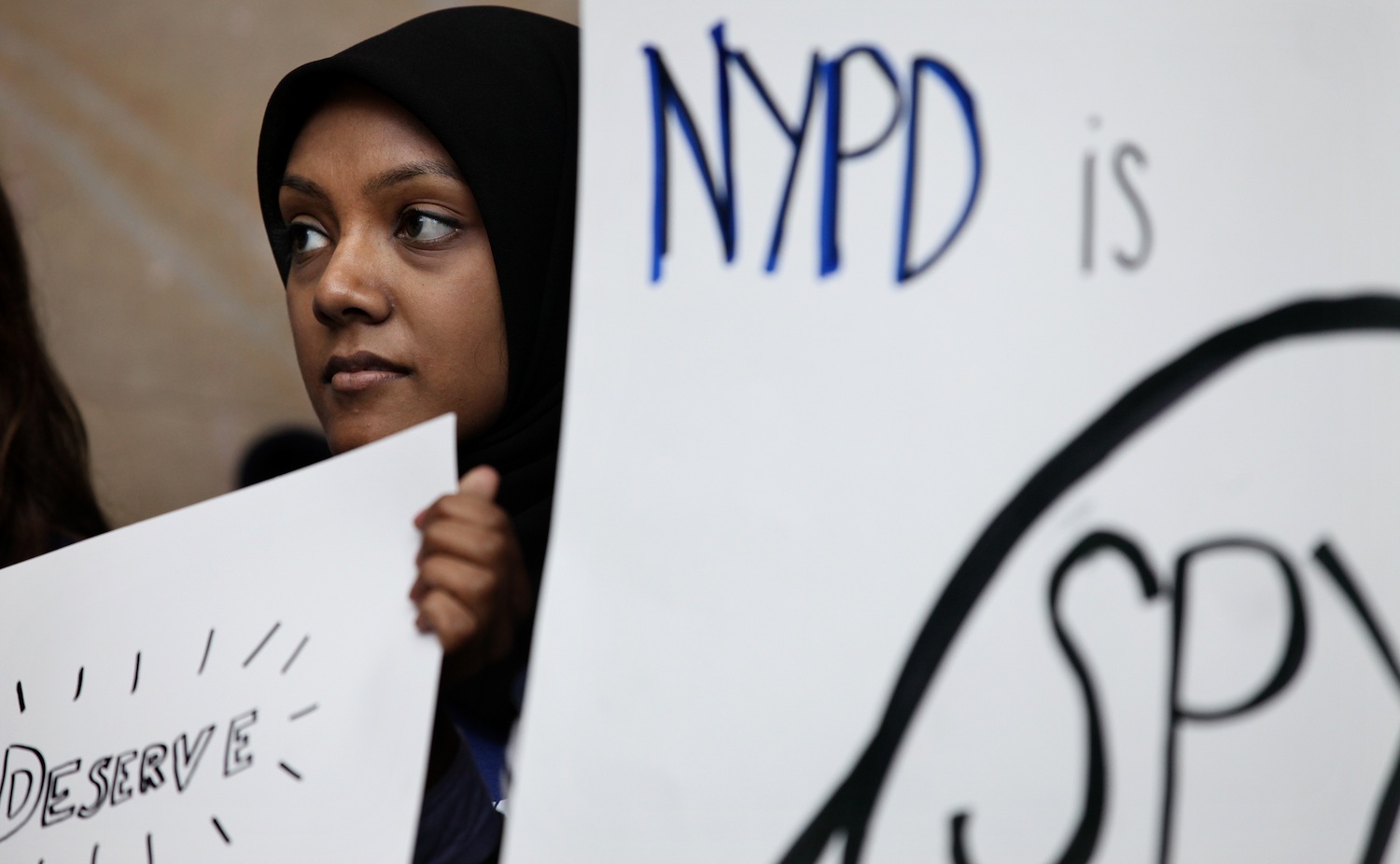 In the foreground to President Obama’s major address today on his evolving sense of the boundary between legitimate national security and illegal surveillance, there came this week a reminder of New York City’s own surveillance state, in a press release from the city’s Law Department about the multimillion-dollar settlement struck with people who were arbitrarily arrested during demonstrations around the 2004 Republican National Convention.

The settlement was the bad news, according to the Law Department. The good news, for them, was that the city prevailed on all the systemic issues the RNC lawsuits raised—about mass arrests, about “no-standing” and “demonstration” zones, about “keeping sensitive and confidential intelligence documents from being disclosed” and “the importance of the intelligence gathered leading up to the RNC, which was pivotal in shaping the policies adopted during the event.” That intelligence included infiltrating protest groups and sending detectives to other states to spy on leftist groups that were planning to attend the convention.

When those clandestine activities were publicized in 2007, they were shocking. Now, we shrug. In part that’s because New Yorkers have gotten used to a redefinition of the line between police power and private liberty. But it’s also because government spying is inherently secretive—so we don’t have anything like a complete picture of whom the NYPD has spied on since.

Those facts frame Mayor de Blasio’s approach to intelligence gathering and civil liberties. During the campaign, de Blasio was forced to address the surveillance of Muslims, which we know involved cultivating informers who helped lure a few Muslim New Yorkers into terrorist plots; spying on mosques and restaurants; keeping tabs on youth groups; and sending detectives across state lines to gather material and maintaining something called “the demographic unit.”

Back in 2012, de Blasio defended the NYPD’s approach. “Based on what I’ve learned, I believe that the NYPD is currently limiting its work to the pursuit of specific leads and that there is a substantial legal review process connected to those decisions,” he said in a speech reported by The Wall Street Journal.

In 2013, he changed his tune, telling a Muslim audience in October that he’d end the broad surveillance of their community. “The efforts of surveillance have to be based on specifically specific information, and obviously you need to go through a careful vetting process,” de Blasio said, according to CBS.

Now that de Blasio is mayor, will he actually roll the spying back? That’s one question. A better one is, How will we know?

Linda Sarsour, the executive director of the Arab American Association of New York, is patient. She says the fact that David Cohen, the former CIA man who ran Ray Kelly’s intelligence operation, has left “is a good sign but had nothing to do with new administration.”

“De Blasio says he wants a thorough review of intelligence programs,” she adds. “He may be waiting for the new inspector general to be appointed.” (De Blasio must appoint a commissioner of the Department of Investigation, who then appoints the IG.) Sarsour and her allies may also ask for a comptroller audit of the intelligence gathering programs. “We also have three lawsuits. Results from those are key. They are still in process.”

As comprehensive as those challenges are, it’s not clear that any of them can get the city to face up to a deeper atmosphere of suspicion, a broader resistance to dissent and a widespread acceptance of surveillance—all things that characterized the Bloomberg years.

The deeper atmosphere of suspicion was embodied in a 2007 NYPD report called “Radicalization in the West: The Homegrown Threat” that listed as a signature of radicalization such steps as “giving up cigarettes, drinking, gambling and urban hip-hop gangster clothes,”and “becoming involved in social activism and community issues.” It’s unclear how deeply these ideas penetrated into the NYPD’s intelligence mentality. But creating a broad matrix of signals that someone is a threat is the way a law-enforcement agency can manage to target a wide swath of some population, while also claiming to only be following legitimate leads.

The Bloomberg administration was rightly criticized for the systematic surveillance of Muslims, but that was part of a larger security apparatus that has escaped any comprehensive review. The Bloomberg administration prohibited a pre–Iraq War march in 2003 on “security” grounds, barred RNC protesters from gathering on Central Park’s Great Lawn out of an alleged fear that they might hurt the grass, made an effort to systematically videotape protesters and infiltrated Critical Mass rides. Meanwhile, private and public security cameras proliferated as the NYPD sent up hugely expensive security zones in the financial district and midtown, and the city won the right to search the bag of anyone who rides the subway.

Some of those steps may have been reasonable—public housing residents, for instance, often clamor for surveillance cameras as a weapon against street crime. Just like Obama, de Blasio has to strike a balance. Maybe someday he’ll follow the president’s lead and explain exactly where the balance should be, so that New Yorkers can figure out whether to trust him.

Because, as is the case with the federal government, we’ll never know with absolute certainty whether the NYPD’s clandestine reality always and everywhere matches the mayor’s public rhetoric. We’d need spies for that.