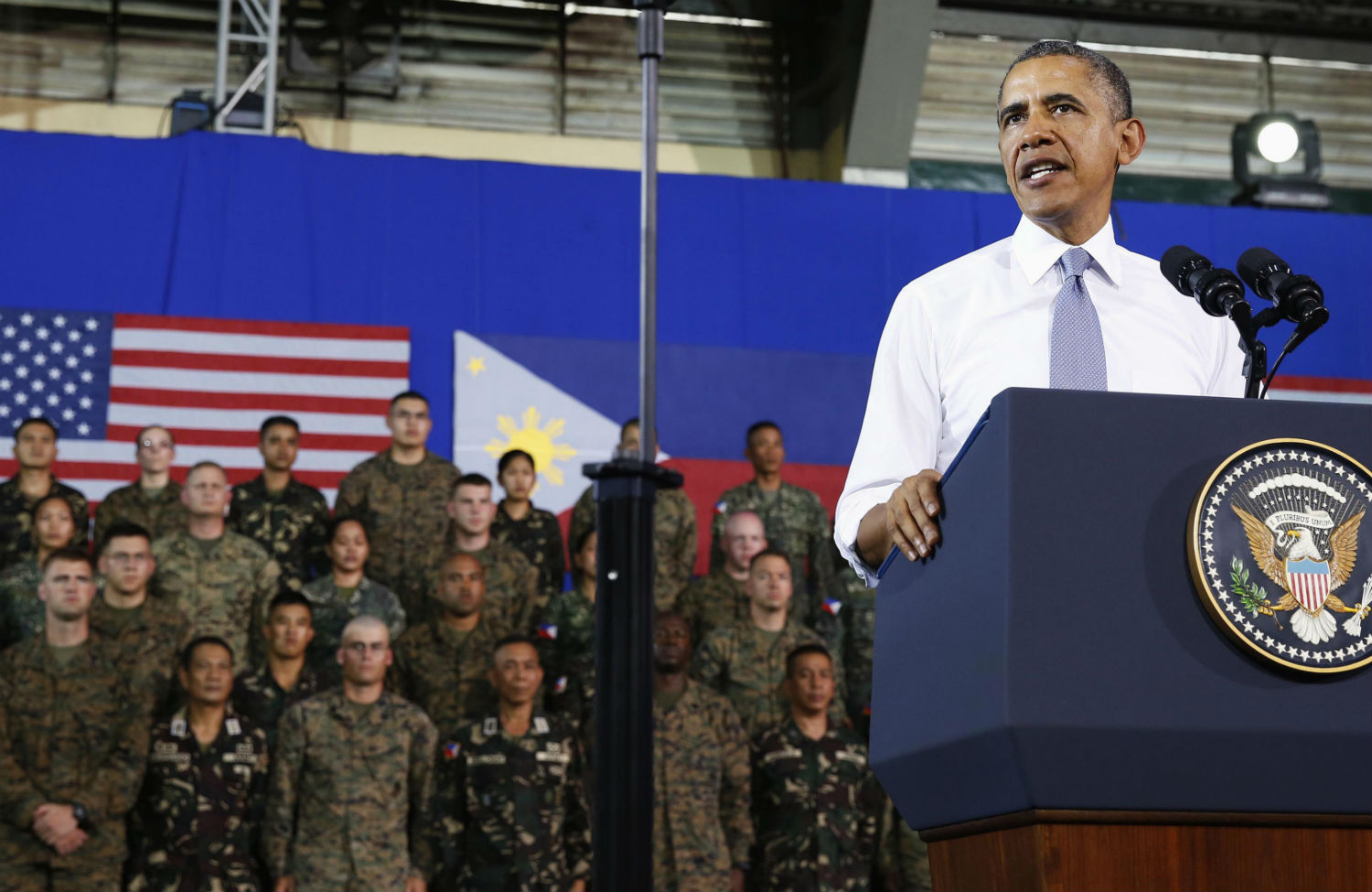 As US President Barack Obama descended on the Philippines, Manila and Washington were rushing to complete negotiations on an Agreement on Enhanced Defense Cooperation (AEDC) between the two countries.

The Philippines’ territorial disputes with China are one major reason for this new agreement. With Washington’s help, Philippine President Benigno Aquino III wants to make the Chinese respect the Philippines’ claims in the Scarborough Shoal, the Spratly Islands, the continental shelf and its 200-mile exclusive economic zone (EEZ).

The truth of the matter, however, is that the deal will do no such thing.

What the agreement boils down to is that the Philippines will give the United States the right to operate bases in the country—for no rent—without the guarantee of US protection of the Philippines’ island territories.

According to Philippine officials, the new agreement is governed by the US-Philippine Mutual Defense Treaty (MDT), which they say obliges Washington to come to the Philippines’ defense in the event of an attack on Philippine territory, including its possessions in the West Philippine Sea. Here they cite Article V of the MDT, which says “an armed attack on either of the Parties is deemed to include an armed attack on the metropolitan territory of either of the Parties, or on the island territories under its jurisdiction in the Pacific, or on its armed forces, public vessels, or aircraft in the Pacific.”

That is not the way the United States sees it. Indeed, the US government has not deviated from the position explicitly stated several years ago by Morton Smith, a US Embassy spokesperson. According to researcher Roland San Juan, Smith asserted that the Spratly Islands claimed by the Philippines are excluded from the scope of the treaty because the Philippines raised its claim to them more than three decades after the MDT was signed in 1951.

This is in contrast to Washington’s implicit support for Japan in its territorial dispute with China over the Senkaku/Diaoyu Islands. “I restated the principles that govern longstanding US policy on the Senkaku Islands and other islands,” US Defense Secretary Chuck Hagel said of his April visit to Beijing. “We affirmed that since [the Senkaku Islands] are under Japan’s administrative control, they fall under Article 5 of our Mutual Security Treaty.” Article V of the US-Japan Mutual Security Treaty provides that “an armed attack against either Party in the territories under the administration of Japan would be dangerous to its own peace and safety and declares that it would act to meet the common danger in accordance with its constitutional provisions and processes.”

During his recent state visit in Japan, Obama reiterated this commitment to Japanese Prime Minister Shinzo Abe. But he will not make the same promise to President Aquino in Manila when it comes to the Philippine possessions in the South China Sea.

If the deal does not provide for US support for the Philippines’ territorial claims in the South China Sea, then what’s in it for the Philippines? Most likely an increase in military aid, including a few antiquated Hamilton class cutters. If so, this is a very poor return for a larger US military presence and a grant to operate US bases out of Philippine installations. This is essentially what the deal is all about, though given local sensitivities and a constitutional ban on foreign bases in the Philippines, both parties studiously refrain from calling the concentration of US personnel, facilities and war equipment “bases.”

Pacific Pivot on the Cheap

So what’s in it for the United States?

The US government has always said that its main interest in the South China Sea is “ensuring freedom of navigation.” The first thing to note here is that although China claims the South China Sea as a domestic waterway in its notorious Nine-Dash-Line claim, the threat of its interfering with freedom of navigation has always been remote. China is not about to court world condemnation by enforcing its domestic shipping regulations on a busy waterway through which an estimated one-third of international trade passes. Nor does it have the capability to do so, and won’t for a long time to come.

But even if the Chinese were to pose a threat to international navigation, the United States would not need a Philippine outpost to accomplish its stated goal of protecting international shipping. Even after Washington lost its Philippine bases at the end of the Cold War, the Pentagon had the South China Sea firmly under control throughout the 1990s. According to analyst William Berry, during the Mischief Reef crisis in 1995, then Assistant Secretary of Defense for International Security Affairs Joseph Nye “stated that if any conflict in the South China Sea threatens freedom of the seas, then the United States Seventh Fleet was prepared to provide escort services so that freedom of navigation could be protected.” That this was no bluff was revealed in 1996 during the Taiwan Straits crisis, when two aircraft carrier battle groups were deployed swiftly and with ease out of Yokosuka, Japan, to show Washington’s support for Taiwan. And again in 1998, a US carrier battle group was sent near the Spratlys, apparently to send a message to all parties that the United States would protect freedom of navigation in international waters, once again showing its ability to act without relying on a base in the Philippines for logistics. Indeed, the elimination of the Subic and Clark bases in the Philippines was probably a big plus for the US Treasury, since it did away with the great cost of maintaining large fixed bases.

So why does the United States now want a higher military profile in the Philippines? The answer lies in what one might call Washington’s “exhibitionist syndrome”—that is, the imperative it feels to “show the flag” to its allies and to China. And if it can do so in an inexpensive way, with a quid pro quo involving just a few of what the Americans call “Excess Defense Articles” like antiquated cutters, then all the better. This is what John Feffer characterizes as Pacific Pivot on the cheap. As Frank Chang of the Foreign Policy Research Institute writes, “It clearly offers the United States a cost-effective way to enhance its presence in Asia, something that Washington has wanted to do for a long time.”

But for the Philippines, the increase in obsolete military donations from Washington will be more than offset by the negative strategic consequences. First of all, the coming agreement will draw the Philippines farther away from a resolution of its territorial disputes with China, and it will be marginalized by the dynamics of a superpower conflict. Second, it will turn the Philippines into another of Washington’s “frontline states” like Afghanistan and Pakistan, with all the detrimental and destabilizing effects such a status entails—including the subordination of the country’s economic, social and cultural dynamics to Washington’s security needs. Third, it will move the region farther away from the negotiation of a collective security agreement, which is a far better alternative to volatile balance-of-power politics, where a simple thing like a ship collision can lead to a bigger conflict.

From Balance of Power to Collective Security

The Philippines’ territorial conflicts with China are real, but the way to resolve them is to rely on international law and diplomacy, and this is terrain in which the Philippines has a big advantage. The Philippines’ submission of a 1,000-page “memorial” delineating the country’s entitlements in the West Philippine Sea to the United Nations Arbitral Tribunal at the end of March was a giant step in this direction. Beijing knows it does not have a leg to stand on in international law, which is why it has been pushing the Philippines to drop the case on pain of “damaging bilateral relations.”

The Philippines must maximize its diplomatic options as well, where it also has an advantage over Beijing. It must press its ASEAN partners to remind Beijing of China’s commitment to negotiate a binding code of conduct on maritime behavior in the West Philippine Sea, which it made at a foreign ministers’ meeting in Brunei in June 2013. It was pressure from ASEAN and internationally that forced Beijing to make this commitment, and it will be consistent pressure that will force it to follow through.

The Philippines should also prepare the ground at the United Nations General Assembly for the eventual introduction of a resolution condemning Beijing’s unilateral annexation of over 80 percent of the South China Sea, brusquely disregarding other littoral states’ rights to their continental shelves and 200-mile EEZs. There’s a very good recent precedent: Beijing’s aggressive annexationism is essentially similar to Russia’s gobbling up of Crimea, which the General Assembly condemned a few weeks ago.

The strategic aim of these diplomatic efforts must be to bring about a collective security agreement for the region that would include ASEAN, Japan, the two Koreas and China. The ASEAN Regional Forum was headed in this direction in the 1990s, despite the opposition of the United States, which arrogated unto itself the role of enforcer of stability in the region. Its momentum was unfortunately derailed by the Asian financial crisis in 1997, which swept the rug from under the credibility of ASEAN’s major states. Although the process will be difficult, it is time to revive this project of collective security, since the unstable and volatile balance-of-power politics favored by Washington is not a viable mechanism for regional peace and security.

With the impending basing agreement with the United States, the Philippines is headed right back to its position during the Cold War, when it played the role of handmaiden to the US containment strategy by hosting two huge military bases. The small window of opportunity to forge an independent foreign policy that the Philippines gained with the expulsion of the US bases in 1992 will disappear with this latest pact with Washington.