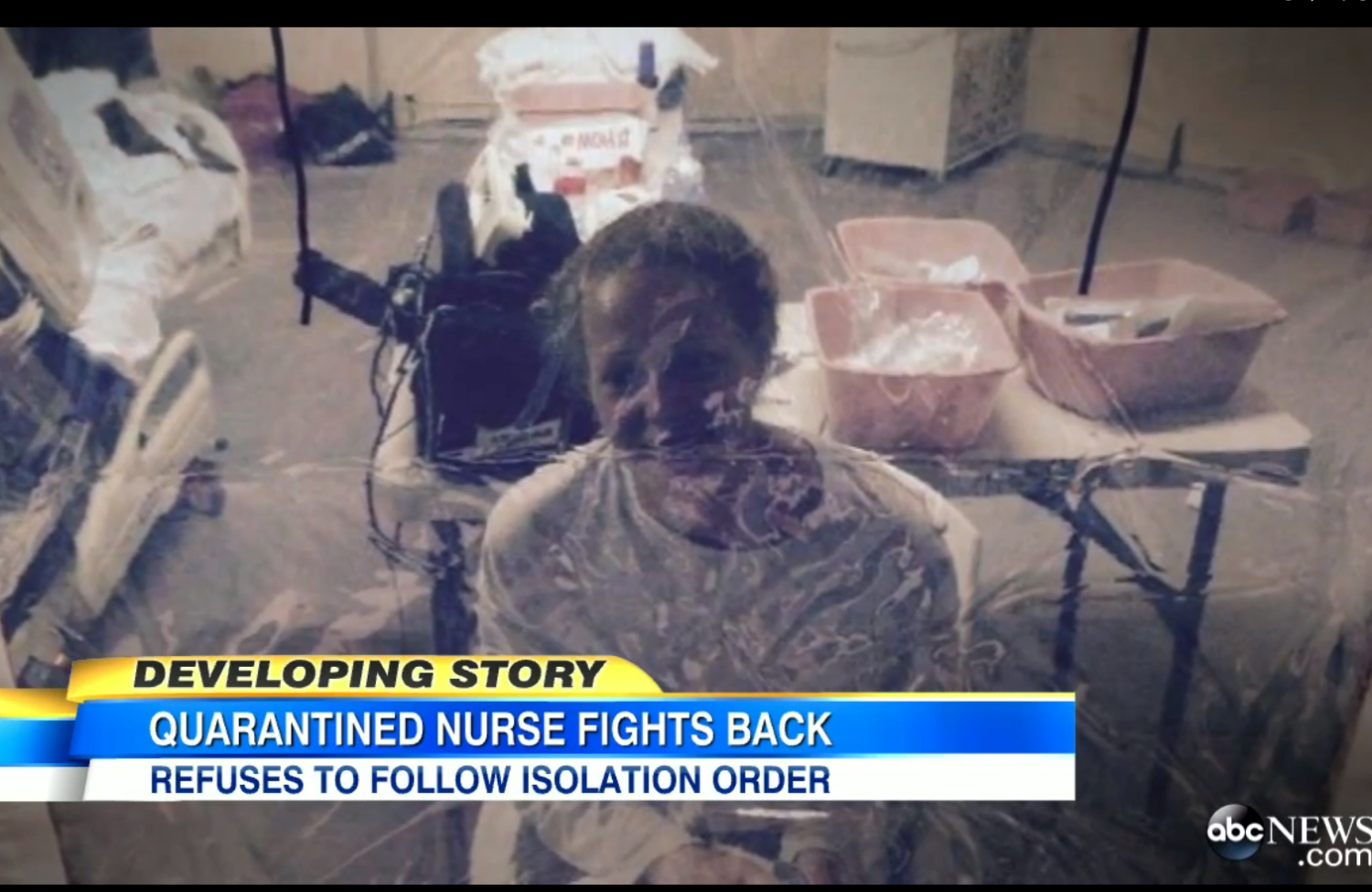 When Kaci Hickox stood up to Governor Chris Christie for quarantining her against her will and claiming she was “obviously ill” when she wasn’t, she did more than bring a little sanity to our Ebola-panic politics. She also struck a blow for all the teachers, nurses, public employees, minimum-wagers and workers of all kinds that Christie has bullied, belittled and silenced over the years. It was a sweet sight, and now she may be doing the same to another out-of-control, authoritarian governor, Paul LePage of Maine.

Hickox, a 33-year-old nurse from Fort Kent, Maine, has advantages that so many of Christie’s victims have not: a platform with the whole world’s attention on her for longer than the initial public encounter and, at least for now, widespread public sympathy. She also had photos of the plastic tent that Christie had confined her in, and its outhouse-like toilet. Even some conservatives could relate: her freedom was taken by government jackbooted thugs (though this time they were from New Jersey, not from Obama; he wanted her released). She word-whipped Christie succinctly: “I am not, as he said, ‘obviously ill.’ I am completely healthy and with no symptoms. And if he knew anything about Ebola he would know that asymptomatic people are not infectious.”

Facing the possibility that an articulate and courageous nurse might unman him, Christie allowed Hickox to return home to Maine. For that, Rush Limbaugh slammed him for being a serial Obama-hugging weakling: “And so one week before the election, once again New Jersey Governor Chris Christie has caved and is seen as—we need to quarantine Chris Christie, is what needs to happen here, folks.”

Embracing Obama is one viral image that Christie, almost certainly running for president in 2016, simply cannot allow to spread. So he’s been trying to re-he-man up, which in this case he can do only by lying. He’s been insisting that he and his gubernatorial partner, Andrew Cuomo of New York, didn’t cave on enforcing their mandatory twenty-one-day quarantine for healthcare workers returning from West Africa. “Our policy hasn’t changed and our policy will not change,” Christie told Matt Lauer yesterday. To get away with that whopper, he had to lie again about Hickox’s health, offering the medical equivalent of pretending that the George Washington Bridge was closed for a “traffic study.” Josh Marshall dissects the deceptions:

[Christie] said she would only have been forced to remain in isolation, “if she continued to be ill. She hadn’t had any symptoms for 24 hours and she tested negative for Ebola. The reason she was put in the hospital in the first place was because she was running a high fever and she was symptomatic.… The minute she was no longer symptomatic she was released.” [Emphasis added.]

Again, based on everything we know about Hickox’s care, this is false. She was never symptomatic for Ebola and she never had a fever with the exception of one reading which was apparently contradicted a short time later by a more accurate test.

Nor was there any need for her to be symptomatic under the policy that the two Governors announced. The explicitly and expressed goal of the policy was not to hold people who were symptomatic but to hold everyone who’d treated Ebola patients in West Africa in isolation for 21 days in case they became symptomatic. Again, these are Cuomo’s and Christie’s own words.

So Christie is not only lying about the specifics of Hickox case he’s also claiming the policy says something different from what he said it was when he announced it.

The guv went on to insist that he’s not a pandering hysteric, but anybody who worries that stigmatizing Ebola volunteers as unclean might disincentivize health workers willing to fight the epidemic at its roots, is. “I think Dr. [Anthony] Fauci is responding, unfortunately, as are many of the people from the CDC, in a really hyperbolic way,” Christie said, with a straight face.

As for Cuomo, there’s no doubt that he’ll win his bid for re-election next week. But he’s come across as Christie’s indecisive junior partner, flipping and flopping on how to handle the situation day by day. He even flip-flopped within the same lame joke, telling folks who’ve been in contact with infected people to stay at home and “enjoy your family, enjoy your friends, read a book—read my book—you don’t have to read my book, but stay at home for 21 days.”

Cuomo and Christie have a “special relationship,” according to The New York Times, which describes it as coming “across as a nonaggression pact, if not an outright alliance: Mr. Cuomo, a Democrat, has refrained from commenting on the Christie administration’s role in the closing of access lanes to the George Washington Bridge; Mr. Christie, the head of the Republican Governors Association, has declined entreaties to campaign for Mr. Cuomo’s Republican opponent in the Nov. 4 election.”

(Worse, they may have partnered up in trying to tamp down the Bridgegate scandal. The Wall Street Journal reported last December that Christie called Cuomo to ask to him to rein in one of his Port Authority appointees from investigating Christie’s PA appointees. “A Cuomo spokesman denied the call took place when the story came out, although the Journal stood by its story,” Politico recounts, and little more has been heard about it since.)

Meanwhile, Kaci is standing up to another statehouse bully, Republican governor Paul LePage of Maine, now in a tight race for re-election. Just around the time that Christie went stumping for him, LaPage ordered Hickox to stay at her home, where Maine State Police are monitoring the residence.

She says if she’s not allowed out by Thursday morning, she’ll go to court. “This policy is not scientifically or constitutionally just,” Hickox told Matt Lauer via Skype this morning. “I am not going to sit around and be bullied by politicians and forced to stay in my home when I am not a risk to the American public.”

If she does develop symptoms, she says she will of course isolate herself, call the health department, and arrange to be safely transferred to a hospital.

But if LePage, Christie, Cuomo, and the rightwing media have their way, even a perfectly healthy Hickox will remain quarantined until November 10—too late to vote, of course.