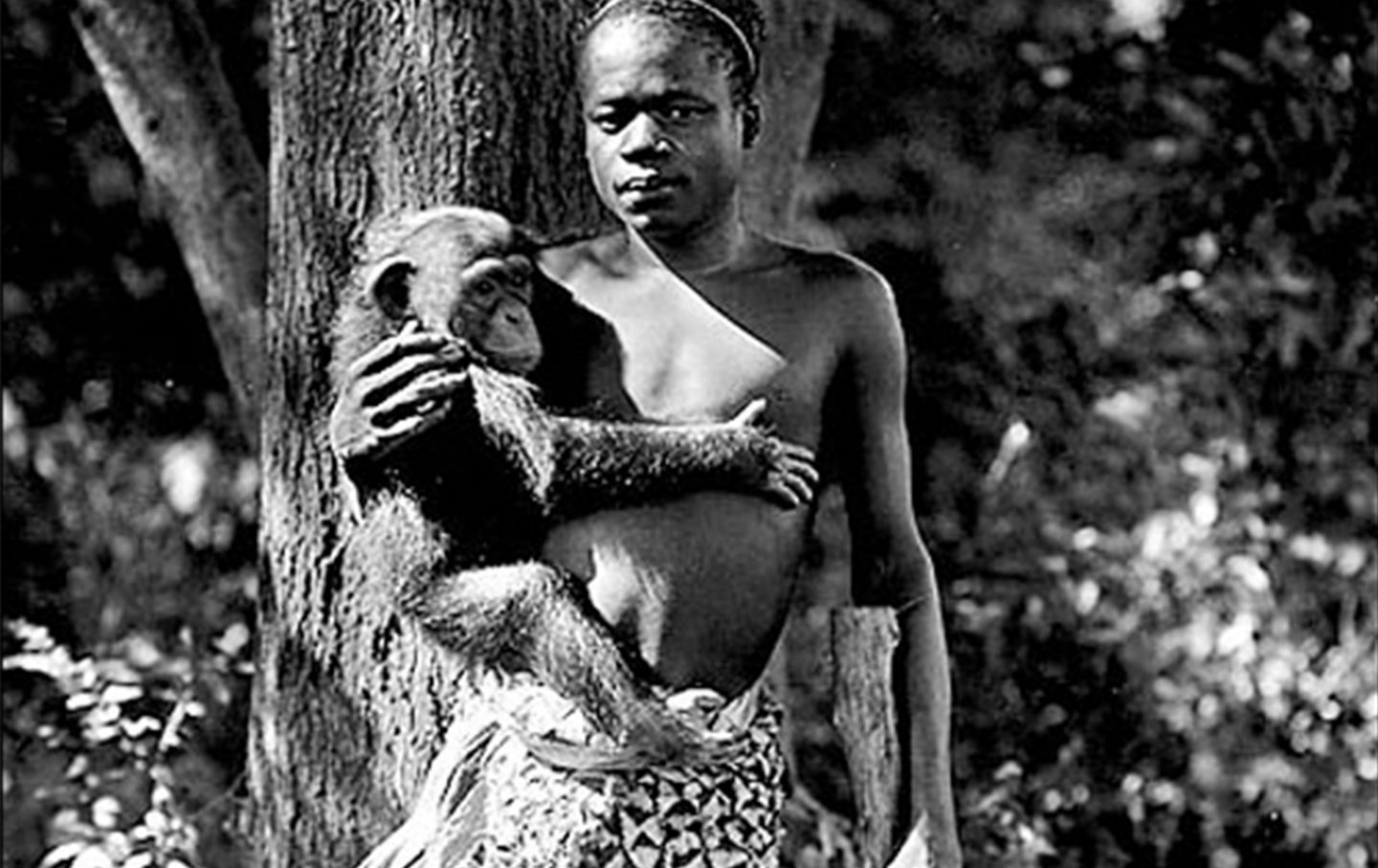 At the dawn of the 20th century, a young 103-pound, 4-foot-11-inch tall African named Ota Benga was exhibited in the Bronx Zoo monkey house. The year was 1906, eight years after the consolidation of the five boroughs transformed New York into one of the world’s largest cities, a dazzling hub of finance, publishing, culture, and trade. The New York Zoological Gardens was one of the city’s crown jewels, a sprawling neoclassical wonderland of lush forest, soaring statuary. and gleaming white beaux arts–style pavilions. What became known as the Bronx Zoo had been willed into being by the city’s social elite, who positioned it as the world’s largest and most scientifically advanced facility with an unrivaled array of exotic animals.

On September 8, the unveiling of its latest acquisition, the so-called “pygmy” from the Congo, garnered sensational headlines. “Bushman Shares a Cage with Bronx Park Apes,” screamed the New York Times headline on the following day. According to the article: “The human being happened to be a Bushman, one of a race that scientists do not rate high in the human scale. But to the average non-scientific person in the crowd of sightseers there was something about the display that was unpleasant.”

By the second day of the exhibition, zoo director and chief curator William Temple Hornaday moved Ota Benga from the chimpanzee cage to a larger crescent-shaped structure littered with bones to suggest cannibalism. Benga was joined by an orangutan. A descriptive sign outside the cage noted his age, height, and weight and indicated that he would be “Exhibited each afternoon during September.”

Up to 500 people at a time flocked to the monkey house to behold a spectacle that prompted headlines from New York to California and across Europe. Many laughed. Some jeered. Others cringed. But Ota Benga was a sensation. During the month of September nearly a quarter-million people visited the zoo, double the number from the previous year, and most, if not all, saw the caged Ota Benga, seated in stupefied silence. The prevailing attitudes toward black life, about how little it mattered, had been baked into science, publishing, media, and government and education policies, and they were now on display at the zoo.

A century later many African-Americans continue to assert our humanity against overwhelming evidence that to many, our lives don’t matter. A harrowing cycle of unprosecuted and acquitted police killings of unarmed black boys and men, along with their mass incarcerations for low-level drug infractions, has taken Ota Benga’s place as the modern spectacle—the prism through which white America observes the novelty of caged black life. Over breakfast cereal we now watch the televised spectacle of unarmed black males in custody, in retreat, or as in the case of 12-year-old Tamir Rice, at play, being snuffed out senselessly. When faced with the most glaring evidence of malice, most good people concur that black lives matter—before switching the station and going on with their day.

If Ota Benga’s exhibition holds a lesson for us today, it is this: his humanity and that of his spectators were inextricably linked. Of the nearly quarter-million people who viewed Ota Benga in a cage—and millions more who consumed sensationalized articles about his degrading circumstances—only a handful spoke out. Most seemed inured to Benga’s plight, just as many appear numb to the brutality that black boys and men live with today.

One reason for this is what sociologists have dubbed implicit bias. The study “Race and Punishment” by the Sentencing Project noted that research consistently finds widespread and deep-seated tendencies among whites to associate blacks and Latinos with criminality. Among the studies citied was one in which non-black college students were primed with images of a black or white face, and asked to identify an object as a gun or a tool. Subjects with the black face hastened the speed by which they were identified with guns. Another study found non-black participants far more likely to shoot unarmed black targets in video simulated shooter studies. Still, when surveyed in 2013, two-thirds of blacks and only one-quarter of whites believed the criminal justice system to be racially biased.

These embedded biases lead many to blithely accept acts of police violence against and the mass incarceration of black males that would otherwise be viewed with alarm. Inured to their pain, many have become impassive spectators to the over-zealous policing of black males, just as millions were to the caging with monkeys of Ota Benga.

While only Hornaday has gone down in history as the fall guy for Benga’s shameful exhibition, it was in reality supported by a similarly broad band of white society as Zimmerman’s acquittal—from the eminent zoo brass, to the newspapers that condoned it, to public officials who failed to act, to academics who embedded degrading ideas about black people in scholarship, to the media that perpetuated them, and the passive spectators who failed to speak out. For most Americans, the shameful spectacle was valid, perfectly just.

Benga could count on a handful of white elites who defied the racial conventions of their day to champion his cause, his humanity. While newspapers coast to coast made light of the spectacle, William Randolph Hearst’s New York Journal derided it as “disgusting” and a “shameful disgrace to every man in any way connected with it.” John Henry Milholland, a wealthy businessman, offered to finance Benga’s legal defense. And Rev. Robert Stuart MacArthur of Calvary Baptist Church on West 57th Street lent his national prominence and eloquence to Benga’s case.

Few others took offense as a deeply rooted racial ideology had seeped into every segment of society. Four years earlier, The Basis of Social Relations: A Study in Ethnic Psychology, published by G.P. Putnam’s Sons in New York and London as part of the Webster Collection of Social Anthropology, said that Africans were “midway between the Oran-utang [sic] and the European white.” It added: “The African black presents many peculiarities which are termed ‘pithecoid’ or ape-like.” Books like The Negro the Beast and Thomas Dixon’s The Clansman (which became the film Birth of the Nation) were widely praised. And as the Congo was plundered of its resources and millions of its people maimed, enslaved and killed, one of its young subjects was displayed in a Bronx cage, presumed a savage.

Today, the plight of a black male population that has been demonized, hunted, and excessively incarcerated has been normalized and, in some sectors, praised. The recent spate of police killings captured on cameras has finally led to a semblance of national reflection. The NAACP Legal Defense Fund has recorded more than 76 cases of unarmed people of color, most of them young black males, killed by police since 1999, when 23-year-old Amadou Diallo was shot 40 times as he stood on his stoop. In the overwhelming majority of these cases, their killers have gone free. A recent ACLU report showed that in Maryland alone 75 black males—nearly half of them unarmed—were killed by police between 2010 and 2014. Of a total of 109 cases, police officers were criminally charged in two.

In the wake of a 21st-century spectacle of the videotaped killings by police of black males, it behooves us to ask: How many more aborted lives? How many more black males stalked and caged? And how long will a national audience impassively look on?

Whether it will take a national forum on black men and criminal injustice, quiet reflection in places of worship, counseling, or mass protests, the times call for an arousal of conscience. Yes, we need police officers to be outfitted with cameras, but we also need for the humanity of blacks in the eyes of their fellow Americans to be fully realized. That would mean not only saying, but actually showing, that our lives matter.

But just when will it matter?