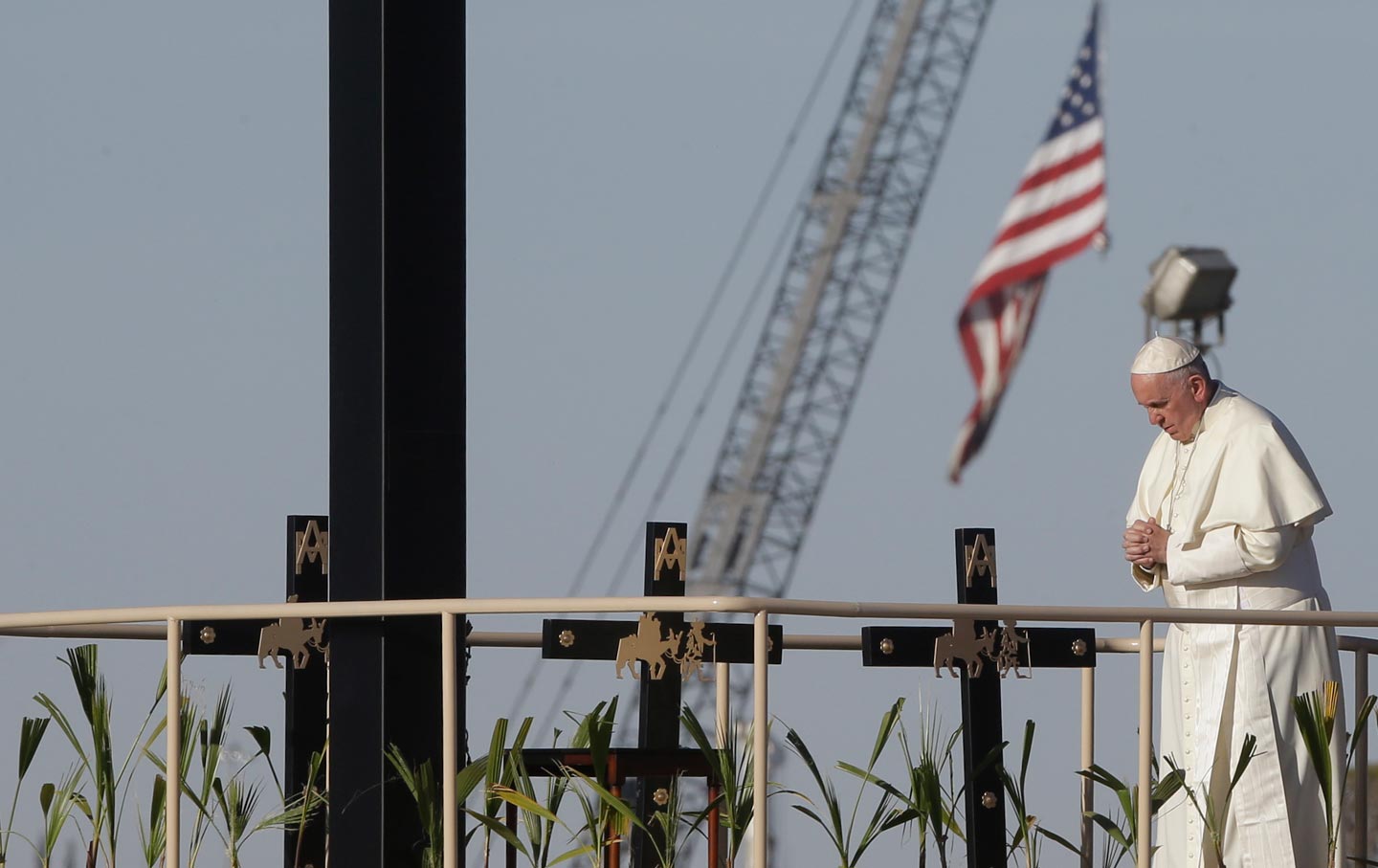 As usual, Vice President Joe Biden cut through verbal clutter with charming candor when asked about Thursday’s top news story, Pope Francis suggesting Donald Trump is “not a Christian” because of his harsh anti-immigrant views, and Trump calling the pope’s words “disgraceful.”

“Pope Francis, Trump, it’s not a hard call for me. It’s not even close,” he told MSNBC’s Rachel Maddow. And then he laughed.

I’m with Biden, but let me offer a bit more elaboration in defense of the pope. The huffing and puffing over Francis’s supposed foray into American politics is shocking, and stupid. The suggestion that because he once said “Who am I to judge?” in reference to gay people, he’s a hypocrite to judge Trump is even dumber.

Let’s first look at how the pope came to make his Trump remarks. He was asked by a reporter whether a Catholic could vote for “a person like” Trump. He replied:

A person who thinks only about building walls, wherever they may be, and not building bridges, is not Christian. This is not in the Gospel. As far as what you said about whether I would advise to vote or not to vote, I am not going to get involved in that. I say only that this man is not Christian if he says things like that. We must see if he said things in that way and in this I give the benefit of the doubt.

So already it’s clear that the pope was absolutely not telling American Catholics whom they should vote for. Nor did he unequivocally exclude Trump from the Christian community. There’s a lot of nuance, and room for doubt and debate, in the pope’s answer.

On the simplest level—the level of Christ’s teachings—the pope is simply right. Father James Martin, who’s become the country’s foremost translator of Catholicism, as well as of this pope, explains it this way:

Any person who consistently speaks of excluding people, who trumpets his desire to (literally) build more walls between communities, and who manifests a desire to increase division, is not walking the Christian way. For the desire for unity, for oneness, for community, is an essential part of the Christian worldview.

As Martin notes, “pontiff”—another term for pope—comes from the Latin word for “bridge builder.” The pontifex—the ultimate bridge builder—was expressing a truth that’s fundamental to his faith.

Just as important, this pope has committed himself to reorienting Catholicism away from an emphasis on rules, judgment, fire and brimstone, and bedroom policing and toward an embrace of love, joy. and inclusion in the practice of faith. His first apostolic message, Evangelii Gaudium, “The Joy of the Gospel,” exhorted Catholics to spread their religion by compassionately offering service and charity, not moralizing and condemning. He particularly singled out “exclusion” as against the teachings of Christ:

Today we also have to say “thou shalt not” to an economy of exclusion and inequality. Such an economy kills. How can it be that it is not a news item when an elderly homeless person dies of exposure, but it is news when the stock market loses two points? This is a case of exclusion. Can we continue to stand by when food is thrown away while people are starving? This is the case of inequality. Today everything comes under the laws of competition and the survival of the fittest, where the powerful feed upon the powerless.

The pope was only being true to his own understanding of his faith when he suggested that someone who “builds walls and not bridges” is not a Christian. They were tough words, and Trump and his supporters are certainly free to disagree.

But let us also remember that the pope didn’t condemn Trump to hell. Nor did he threaten to excommunicate him or deny him the sacraments (of course he can’t, Trump’s not a Catholic), the way conservative American bishops have done with liberal Catholic politicians who are pro-choice, including House minority leader Nancy Pelosi and Secretary of State John Kerry. Of course, the American right loves the Catholic pope when he’s railing against abortion or gay people, but let him say a tough word about Donald Trump, and he’s a pariah.

Meanwhile, America’s political pundits are evaluating the pope’s remarks like he’s a candidate surrogate who went too far. MSNBC’s Michael Steele, a Republican Catholic, suggested the pope “got out over his skis,” a comparatively gentle rebuke compared to what other conservatives are saying. ABC’s Rick Klein is talking about how the pope’s remarks “helped” Trump, as though he had any thought of helping or hurting when he made his remarks. So much of the commentary treats him like a wayward campaign supporter—say, Bill Clinton, or Killer Mike—who went overboard.

Maybe most disturbing, the pope’s remarks unearthed the anti-Catholicism that still runs beneath the surface of American politics. Leave it to Ann Coulter to be the most disgusting. She tweeted that of the pope and Trump, only one “runs a huge multinational that protects subordinates when they rape little boys.” Then the Trump-supporting bigot trashed Senator Marco Rubio, who defended the pope, as “a ROMAN Catholic, beholden to the Pope.” That’s an old conservative canard that held Catholics could never be true Americans because they were loyal to a foreign power, the Vatican. It’s mostly gone underground, and yet Coulter and other anti-Catholic tweeters I’ve seen in the last few days reminded me: We’ve had as many Catholic presidents as we’ve had black presidents: exactly one.

Had Trump taken time to listen to the pope’s words about him, he would have found room for a dialogue about whether he is, in fact, living in accordance with the Christian imperative of kindness and inclusion. But of course Trump didn’t wait to hear the pope’s full statement or its context before issuing a fiery condemnation, calling the remarks “disgraceful” and suggesting the pope will be sorry when ISIS attacks the Vatican. Trump’s vicious answer pretty much proved the pope’s point.