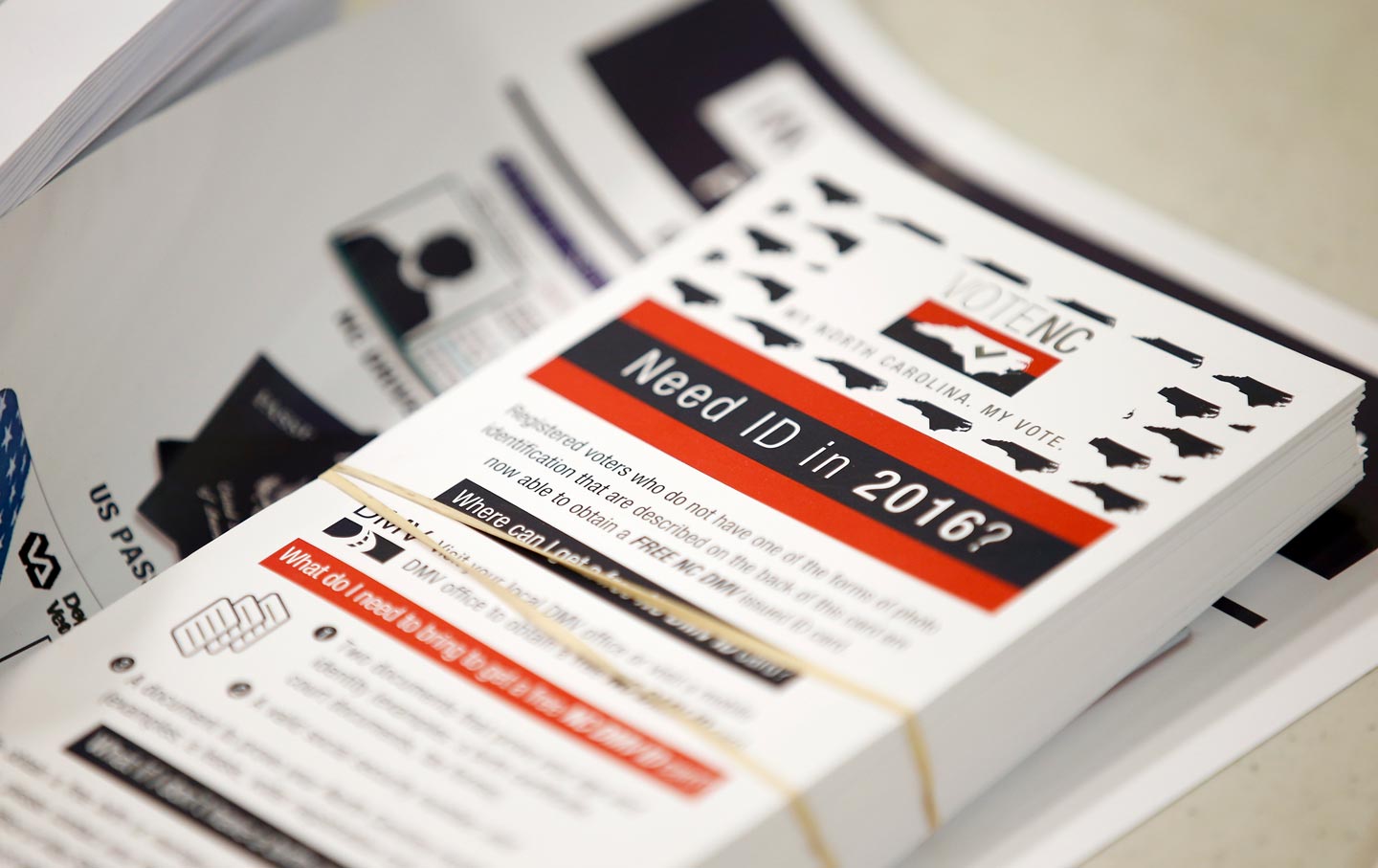 North Carolina’s new voter ID law goes into effect for the first time during the March 15 primary, and 218,000 registered voters do not have an acceptable form of government-issued ID now required to vote.

Ethelene Douglas, an 85-year-old African-American woman who grew up in the segregated South and first registered to vote in 1964, was one of them. Her struggle to obtain the necessary ID vividly illustrates the problems with the law.

They were so frustrated that they gave up trying for a time. In the fall of 2013, after North Carolina passed the voter ID law, they made a third trip to the DMV. An employee told Quick to get a census report to confirm her aunt’s identify, which she purchased for $69. Quick brought her aunt’s census report, marriage certificate, Social Security card, and utility bill during a fourth trip to the DMV in September 2014 and was finally able to get her the photo ID needed to vote.

It took two years, four trips to the DMV, two trips to South Carolina, and $86 in government documents for an 85-year-old woman to continue to vote. Quick called it “an absolute nightmare. There are other voters out there that do not have the money, time, access to transportation, and family assistance to obtain a NCDMV photo ID. It should not be this difficult to obtain an ID for voting.”

Douglas’s story is all too familiar these days. In recent weeks, I’ve written about 94-year-old Rosanell Eaton, who had to recite the Preamble to the Constitution from memory to register to vote in Jim Crow North Carolina during the 1940s and had to make 11 trips to different state agencies in 2015 to comply with the new law. And 86-year-old Reba Bowser, a Republican voter since the Eisenhower era, whose voter ID application was initially rejected despite the fact that she presented an expired New Hampshire driver’s license, two different birth certificates, a Social Security card, a Medicare card, and her apartment lease to the DMV.

Nor have the problems been confined to elderly voters. Logan Graham, a student at North Carolina State, couldn’t vote with his out-of-state driver’s license or his state university-issued ID. When he went to the DMV to get a voter ID, he was wrongly sent to the Board of Elections, which then sent him back to the DMV, where the two-hour lines twice forced him to leave before obtaining an ID so he could go to class.

The good news is those with a “reasonable impediment” to obtaining an ID can still vote in North Carolina. The GOP legislature, evidently worried that the law would be struck down, added this provision three weeks before a federal court heard a challenge to the rule. The bad news is they must cast a provisional ballot that is subject to challenge, and more than half of the provisional ballots cast in North Carolina in 2014 were rejected. Furthermore, few voters know the reasonable impediment provision exists. “The state has flatly done an inadequate job of educating people,” says Allison Riggs, a senior attorney with the Southern Coalition for Social Justice.

During the early voting period, over 2,567 provisional ballots have been cast—865 voters did not bring an acceptable ID to the polls and will have to return to the county board of elections by March 21 with an ID to have their ballot counted, and 391 voters cited a reasonable impediment to obtaining one. One of those voters was North Carolina Senator Richard Burr, a supporter of the law who lost his driver’s license and showed up at the polls without ID.

Voter ID was just one of the sweeping voting restrictions adopted by the North Carolina legislature a month after the Supreme Court gutted the Voting Rights Act. The limits include cutting early voting, eliminating same-day registration, banning out-of-precinct voting, and ending preregistration for 16- and 17-year-olds. Luckily for voters, same-day registration and out-of-precinct voting will be in effect for the primary, based on an order from the United States Court of Appeals for the Fourth Circuit that is pending judgment before a lower court.

In 2014, Democracy North Carolina estimated that “the new voting limitations and polling place problems reduced turnout by at least 30,000 voters.” The group found 2,344 rejected provisional ballots would have been counted if same-day registration and out-of-precinct voting had been in place. The elimination of these provisions disproportionately affected African-American and Democratic voters. African Americans made up 22 percent of registered voters but cast 38 percent of rejected ballots. Democrats accounted for nearly half of all rejected ballots.

A 2014 study by the Government Accountability Office found that voter ID laws reduced turnout by 2 percent, with the largest impact among younger, newly registered, and minority voters. For those who argue that these restrictions don’t make a difference, remember that in 2008, Barack Obama won North Carolina by 14,177 votes, or 0.32 percent.