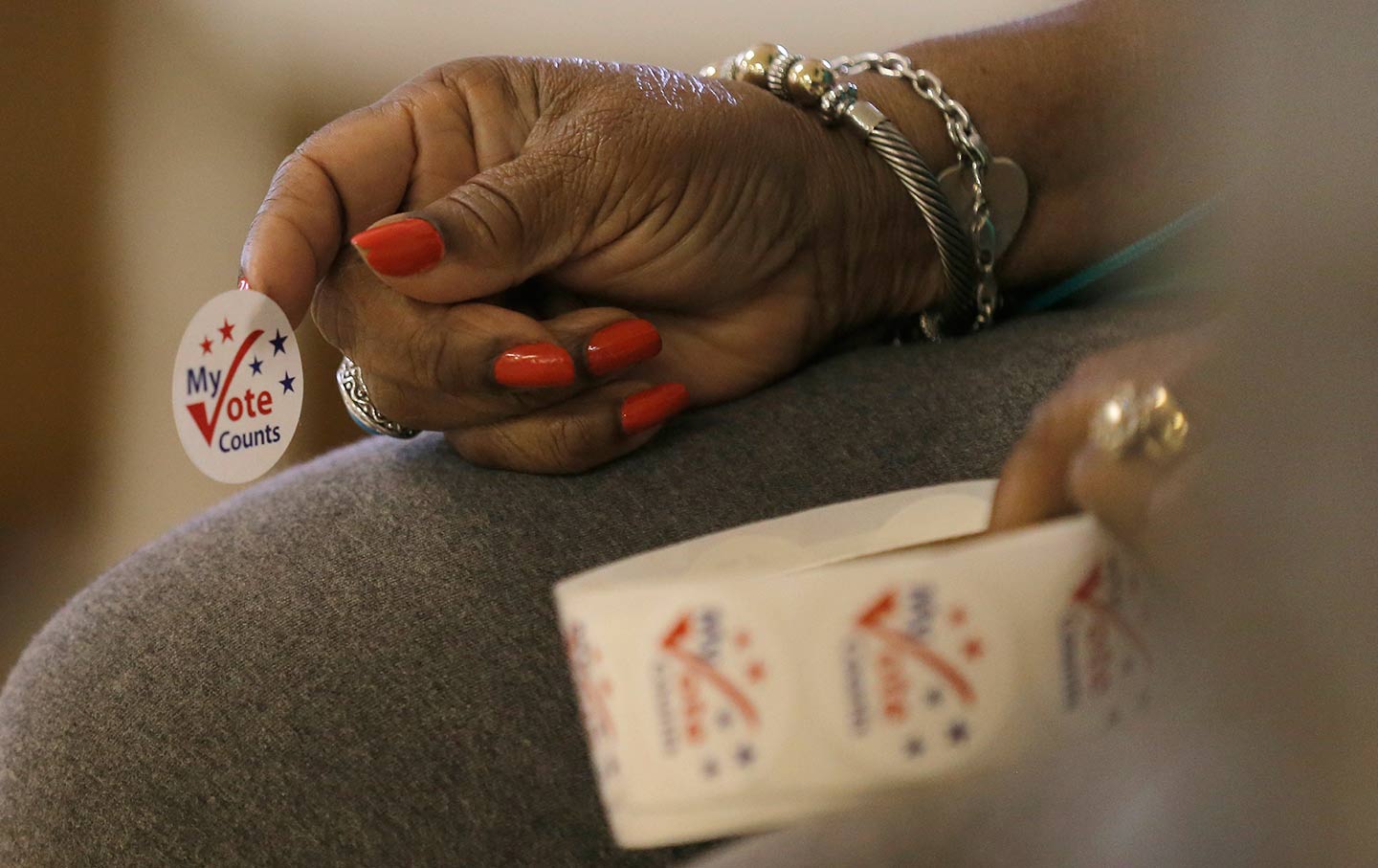 A worker holds stickers for voters at a polling station at the Princeton Baptist Church in North Carolina on November 8, 2016. (Reuters / Chris Keane)

On May 15, the Supreme Court let stand a decision from the United States Court of Appeals for the Fourth Circuit ruling that North Carolina’s sweeping voting restrictions targeted African-American voters “with almost surgical precision.”

A week later, on May 22, the Supreme Court struck down two of North Carolina’s congressional districts as unconstitutional racial gerrymanders, upholding a lower-court opinion that “race predominated” in drawing the districts.

It’s now overwhelmingly clear that Republicans in North Carolina illegally made it harder for African Americans to vote and diminished the power of their votes. Today’s decision could have far-reaching ramifications for striking down gerrymandering nationwide.

In a 5-3 opinion today, Justice Kagan (surprisingly joined by Justice Thomas) ruled that North Carolina artificially increased the number of black voters in the state’s 1st and 12th congressional districts. In the 1st district, the black voting-age population jumped from 48.6 percent to 52.7 percent and in the 12th from 43.8 percent to 50.7 percent. Although black Democrats had held both seats since 1992, Republican leaders said they needed to make the two districts over 50 percent African American to comply with the Voting Rights Act, which Kagan said was blatantly untrue.

Kagan cited a conversation former congressman Mel Watt, who represented the 12th District from 1993 to 2013, had with GOP State Senator Bob Rucho, who oversaw redistricting efforts:

Perhaps the most dramatic testimony in the trial came when Congressman Mel Watt (who had represented District 12 for some 20 years) recounted a conversation he had with Rucho in 2011 about the district’s future make-up. According to Watt, Rucho saithat “his leadership had told him that he had to ramp the minority percentage in [District 12] up to over 50percent to comply with the Voting Rights Law.” And further, that it would then be Rucho’s “job to go and convince the African-American community” that such a racial target “made sense” under the Act.

Watt recalled that he laughed in response because the VRA required no such target. And he told Rucho that “the African-American community will laugh at you” too. Watt explained to Rucho: “I’m getting 65% of the vote in a 40% black district. If you ramp my [BVAP] to over 50%, I’ll probably get 80% of the vote, and[] that’s not what the Voting Rights Actwas designed to do.”

Under the guise of complying with the Voting Rights Act, Republicans in North Carolina turned the VRA on its head, packing the number of black voters in as few districts as possible to deprive black voters of political influence in surrounding districts. This was a strategy adopted by Republicans across the South after the 2010 election, as I reported in my article “How the GOP Is Resegregating the South.”

In virtually every state in the South, at the Congressional and state level, Republicans—to protect and expand their gains in 2010—have increased the number of minority voters in majority-minority districts represented overwhelmingly by black Democrats while diluting the minority vote in swing or crossover districts held by white Democrats. “What’s uniform across the South is that Republicans are using race as a central basis in drawing districts for partisan advantage,” says Anita Earls, a prominent civil rights lawyer and executive director of the Durham-based Southern Coalition for Social Justice. “The bigger picture is to ultimately make the Democratic Party in the South be represented only by people of color.” The GOP’s long-term goal is to enshrine a system of racially polarized voting that will make it harder for Democrats to win races on local, state, federal and presidential levels.

This cynical strategy worked for Republicans. Before the 2010 election, Democrats held an 8-to-5 advantage in North Carolina’s congressional delegation. But after the 2011 redistricting plan went into effect, Republicans have a 10-to-3 advantage today. (A new report by the Brennan Center for Justice found that extreme racial gerrymandering gave Republicans an extra 16 or 17 seats in the House, with North Carolina as one of the prime examples.)

However, these GOP efforts are increasingly running afoul of the courts, who’ve now struck down GOP-drawn redistricting maps in Alabama, Florida, North Carolina, Texas, and Virginia—all states that previously had to approve their voting changes with the federal government under the Voting Rights Act.

Republicans in North Carolina and elsewhere argued that their redistricting maps were constitutional because they drew them to benefit their party politically, not for racial reasons. Justice Alito made the same point in his dissent, which was joined by Roberts and Kennedy. But Justice Kagan, in a very significant finding, said that race and party cannot be separated in states like North Carolina where African-Americans overwhelmingly vote Democratic.

“In Footnotes 1 and 7, the Court explains that in places where race and party overlap so much they can be treated as proxies for one another,” writes Rick Hasen. “Holy cow, this is a big deal. It means that race and party are not really discrete categories and that discriminating on the basis of party in places of conjoined polarization is equivalent, at least sometimes, to making race the predominant factor in redistricting. This will lead to many more successful racial gerrymandering cases in the American South and elsewhere, and allow these cases to substitute for (so far unsuccessful) partisan gerrymandering claims involving some of these districts.”

There is more to come on this front: The courts also ruled that North Carolina’s state legislative districts were also illegal racial gerrymanders, and that decision is being appealed to the Supreme Court.

For now, North Carolina joins Texas as the only state where courts have found that new voting restrictions and post-2010 redistricting maps discriminated against voters of color.

Listen to Ari Berman on the Start Making Sense podcast.