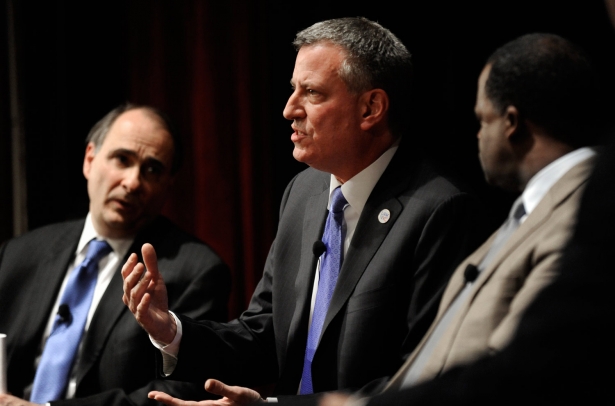 “Budgets are not just a collection of numbers, they are not just an accounting document,” said New York City Mayor Bill de Blasio when he revealed his FY 2015 budget last week. “They reflect fundamental values.” A municipal budget, to trot out an old chestnut, is the way a society writ large votes with its dollars.

So we should be optimistic about de Blasio’s $74 billion plan, which, as New York Magazine explains, espouses “his consistent priorities: education, housing, the homeless, and raises for municipal workers, all in service of combating income inequality.” The Times editorial board stodgily declares that “there is a lot to like in what Mr. de Blasio is proposing.” And Brent Budowsky of The Hill writes (under a headline non-ironically anointing the mayor as the “FDR of New York”), “[The budget] will be a standard for progressive experimentation and execution in the same way Roosevelt created a New Deal for America that not only survives today but also includes many brilliantly successful and popular policies, such as Social Security.” New York–area members of Congress are eagerly praising the budget, too.

Among the budget’s highlights is a $41 billion allocation, over the next ten years, to build or preserve 200,000 units of affordable housing. De Blasio says that this—”the largest, fastest” affordable-housing program ever attempted on a local level—will create around 194,000 construction jobs and 7,000 permanent jobs. The New York City Housing Authority will receive $70 million for repairs and security upgrades. An additional $14.4 million will go toward providing shelter for both homeless families and single homeless adults. Says Denise Miranda of the Urban Justice Center, “De Blasio ensures that no New Yorkers will have to choose between living in a mold-infested NYCHA apartment or being homeless.” (That any New Yorker ever did, of course, is a sad example of the city’s prior commitment to affordable housing.) And $17.75 billion will be used for settling outstanding contracts with the city’s labor unions. (In today’s antilabor climate, the fact that “union” isn’t a bad word in the de Blasio administration is a very big deal.)

De Blasio’s budget is a vital wake-up call to a city that saw gentrification and de facto segregation rise under Mayor Bloomberg’s watch, especially where housing is concerned. “Mayor de Blasio’s [housing] plan could help decelerate the seemingly irreversible social segregation that is plaguing New York,” writes Richard Eskow at the Campaign for America’s Future. “What happens if this plan isn’t carried out? Manhattan and parts of Brooklyn will increasingly become white, wealthy enclaves. Gentrification will drive lower-income families out of even the outermost boroughs. Service workers and other lower-earning workers could soon face commute times that rival those of apartheid-era South Africa. The rich cultural diversity that has been New York City’s hallmark will disappear, and the school desegregation called for in Brown v. Board of Education will become impossible to achieve.” It’s frightening indeed when New York City can see Johannesburg as a “peer” on desegregation.

In a related item, the budget calls for a twenty-five percent increase in public-library funding, further demonstrating the mayor’s commitment to providing cultural and educational opportunities across the city, and not just in its elite Midtown core.

Could we finally be leaving Mayor Bloomberg’s Gilded City behind? In the introduction to our special issue about the Gilded City last year, we quoted James Parrott, chief economist of the Fiscal Policy Institute in New York, as saying, “New York City’s government is significant enough in its breadth…that the policy tools exist and the wherewithal exists to do something at the margins to lessen inequality.” De Blasio recognizes this. He also recognizes that he serves at the pleasure of the people—all 8.3 million of them—and that his mandate encompasses all of them.

As De Blasio’s term unfolds and as his budget takes actual shape, the city government will work provide both real and symbolic results for the people, an upgrade from too many years of relying solely on the symbolic. To see just how potent this new brand of progressivism has become, just look at the scene from the recent sixteenth birthday party of New York’s Working Families Party—which de Blasio helped found. In a speech, honoree Cynthia Nixon announced, “We’re at the beginning of a great progressive era in New York City… Bill de Blasio, [public advocate] Letitia James, [city council speaker] Melissa Mark-Viverito. That is a holy trinity if I ever heard of one. We’ve had so many victories lately, and I feel that if we keep working, we have so many more coming.”

It’s said that the ideas behind New Deal were invented, developed, and tested in New York City in the 1910s and ’20s before going national under FDR. Behind De Blasio and WFP’s “holy trinity,” perhaps the New New Deal can start here, too.