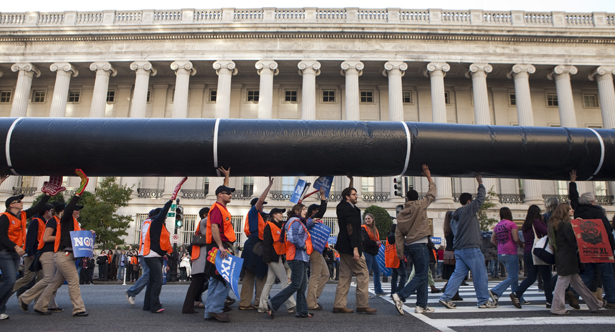 A rally for the cancellation of the Keystone XL pipeline in Washington, November 6, 2011 (Reuters/Joshua Roberts)

Tuesday was a no good, very bad day for many reasons, but especially for the environment. Leadership on environmental policy in the Senate will almost certainly be handed over to James Inhofe, the Oklahoma Republican who thinks that “increases in global temperatures may have a beneficial effect on how we live our lives,” and that regardless, God will take care of things. Even deeper Republican gains in the House mean that it’ll be a long, long time before Democrats could regain full legislative control, so any legislation to put a tax on carbon or otherwise slow emissions is out of the question barring a reversal in the GOP’s position on climate science. And then there’s the Keystone XL pipeline, which Republicans have identified as a priority, and the media are now treating like a sure thing.

Anti-Keystone groups have a different take. “Nothing’s changed,” said Jane Kleeb, director of Bold Nebraska—except, she said, for the fact that staunch KXL proponent and climate denier Lee Terry lost his Nebraska congressional seat to a Democratic challenger. “Republicans both in the House and the Senate have always played this game—they have for the last four years—that they’re going to approve Keystone XL without the president.”

It’s true that pressure to approve the pipeline will become more focused and immediate if the House and Senate pass a bill to override the president’s authority over cross-border projects. Now that Republicans have enough pro-Keystone votes in the Senate to overcome a filibuster, it’s almost certain such legislation will wind up on Obama’s desk.

The question is whether he’ll sign it. On Thursday, press secretary Josh Earnest said Obama will consider whatever legislation Congress sends his way. That the White House declined to threaten a veto outright—as it has in the past—generated headlines and added to speculation that the White House could use the approval of Keystone as a bargaining chip.

So things sound pretty bad for Keystone opponents. However, there are a number of problems with the keystone-is-inevitable story. First, while the GOP will certainly leverage its majority in Congress to up the ante on KXL, political pressure from the president’s own party could swing more clearly in the opposite direction now that many of the pro-Keystone Democrats have lost their seats.

Second, it’s not clear that KXL would be all that valuable as a bargaining chip. The pipeline’s chief value to the Republicans depends on it not getting built, so they can continue to use it as a political bludgeon against Democrats. (Although that’s not to say that fulfilling their campaign promise to get it approved wouldn’t be counted as a victory.)

Third, it’s hard to imagine that Obama would sign legislation that explicitly limits his executive authority, even in the name of “cooperation.” The implications of doing so would be larger than Keystone. From national security to immigration to climate action, the White House has consistently argued for broader, not narrower, powers. Indeed, Obama and Earnest reiterated the president’s ability and intention to use that authority after the midterms in a variety of contexts.

Fourth, while the absence of a direct veto threat captured the headlines, there was plenty in Obama’s remarks on KXL for its opponents to be happy about. He reiterated his commitment to the process playing out in the State Department, which depends in part on the outcome of a legal challenge to the pipeline route being considered by a Nebraska judge. Obama also seemed to be building something of a defense of rejection, by arguing that the pipeline just isn’t all that important to US energy production. “Keep in mind this is Canadian oil, this isn’t U.S. oil,” he said. “We’ve seen some of the biggest increases in American oil production and American natural-gas production in our history. We are closer to energy independence than we’ve ever been before.” Keystone, he said, is just “one small aspect of a broader trend that’s really positive for the American people.”

Now, Obama’s enthusiasm for extracting as much fossil fuel as possible from American soil could ultimately be even more damning for the climate than approving Keystone. But the point is that if anything, Obama seemed to be building a case against the pipeline.

Finally, while there is a filibuster-proof pro-KXL majority in the Senate, there are probably not enough votes to override a presidential veto. In other words, the bottom line hasn’t changed: it’s still up to Obama. At this point it seems that the most likely worst-case scenario is the administration approves the pipeline on its own to avoid having to deal with legislation that would tie the president’s hands.

Environmental groups have been frank about their losses in the election, but they aren’t panicking about Keystone. A staffer at one of the organizations leading the anti-KXL fight, who would only discuss strategy on background, identified the Nebraska judge’s ruling as the moment things will heat up. For now, he said, “we’re inclined to support the process” playing out in the State Department, rather than launch any big actions. If Obama really does make a decision based on the parameters he reiterated on Wednesday (“Is it going to actually create jobs? Is it actually going to reduce gas prices that have been coming down? And is it going to be, on net, something that doesn’t increase climate change that we’re going to have to grapple with?”), the pipeline’s opponent’s feel like they’re on pretty good footing.

Jane Kleeb said that what happens next depends at least in part on whether Democrats push back against the assmption that Keystone is inevitable. “They have got to starting talking about the facts around Keystone XL. They just can’t keep on avoiding the topic,” she said. “The only people who are talking about it are the people who support Keystone XL, and that is shaping, then, public opinion about the project.”

Conventional wisdom has always seen Keystone’s approval as imminent. But the only thing that’s not speculation at this point is that it hasn’t happened yet.