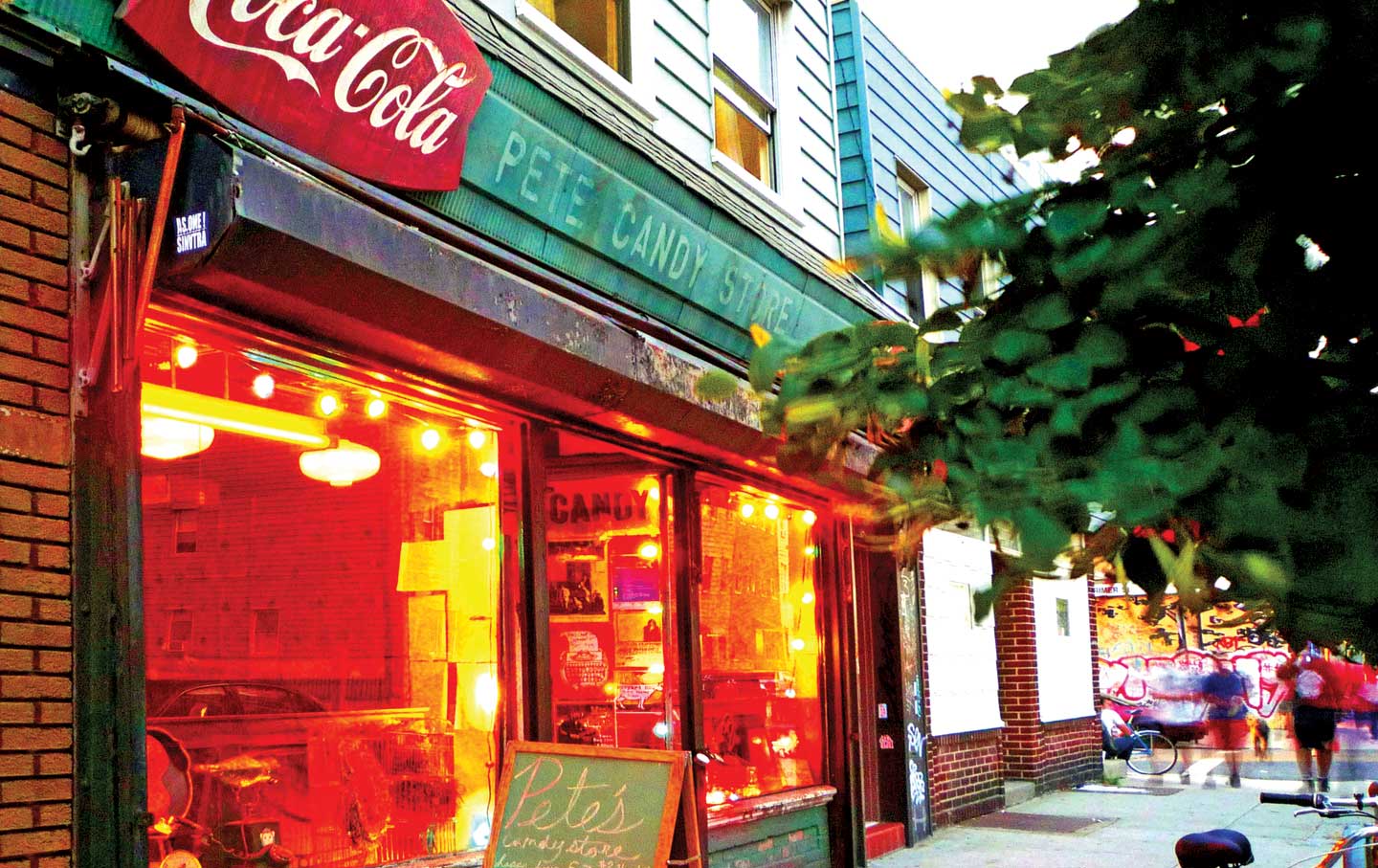 The hipster bar Pete’s Candy Store, once a luncheonette, in Williamsburg, Brooklyn.

D.W. Gibson’s oral history, The Edge Becomes the Center (Overlook; $27.95), presents the reflections of some 30 people from Brooklyn and Manhattan, diverse in age, origin, race, and wealth, on the meaning of the word “gentrification.” The result is kind of a town-hall meeting that also serves as a snapshot of New York City in 2014, before some of its people and places are swept away by another cycle of development.

The first to speak is mKalla, a landlord, poet, musician, and native black Brooklynite, who insists that real estate is an art form, as it entails “people coming together and being understanding and being courageous and breaking through the space where they were and making something new in the universe for themselves.” He celebrates the Barclays Center and newcomers to Brooklyn at the same time that he recognizes the racial character of the displacement. By foregrounding mKalla and other real-estate professionals, Gibson shows his commitment to the fair representation of a complex phenomenon that has benefited some native New Yorkers, while undermining the livelihoods of others.

Later come the voices of community gardeners and entrepreneurs, who recognize the ways that both government and capitalism have failed residents in the past and who call for democratic processes of neighborhood revitalization. Next, a number of artists, ranging from graffitists to the managers of multimillion-dollar family collections, discuss the effect of the lucrative art industry on the city’s creative potential. The debate intensifies in the second half of the book, with Gibson juxtaposing the accounts of bankers and tenants, squatters and speculators.

Gibson uses keywords and common themes to bridge the gap between these voices. Some transitions are more natural than others, and they work best when Gibson takes us on a descriptive journey between neighborhoods. From mKalla’s office, we drive with his business partner to a property in Bedford-Stuyvesant. We meet a contractor, MJ Mai, follow him to his office for an interview, and from there we go to the site of a construction project he had supervised in Manhattan. Gibson’s first book, Not Working (2012), an oral history of the unemployed from California to New York, also used this travelogue style. The form is particularly effective here, in a book so obsessed with space—its privatization and potential for communal use. Traversing the city with Gibson, we cross the boundaries that separate shelter poverty from skyscraping wealth. Perhaps this approach is, like community organizing, a way to “harness disparate currents, new and old, running through the borough.”

In this ecosystem of opposing views, everyone must withstand the accumulating wisdom of the narrative. Even between two people equally concerned with fighting homelessness, differences emerge, with one ready to work hand in hand with the owners of luxury hotels, and the other demanding an end to capitalism. With such a wide variety of perspectives, the facile dichotomy of gentrification pro and con quickly becomes irrelevant. Challenging this dichotomy is one of Gibson’s main goals, and to do so he returns repeatedly to the remark of a tenant- association leader named Barbara Williams: “When people refer to me as they, who’s they? Do not paint me with a brush.” In the same vein, Gibson writes: “Gentrification is often saddled with an us vs. them framework, with ‘us’ and ‘them’ redefined ad infinitum—no two people ever talking about the exact same thing when it comes down to what ‘we’ want and what ‘they’ are doing wrong.”

But who, in this mix, is D.W. Gibson? While he never divulges personal details, we catch glimpses of him reflected in the landscape. On the Lower East Side, he encounters a mural of a group of men, “all vaguely thirty-something, vaguely white, vaguely bearded,” and is struck with a feeling of self-consciousness. We also catch glimpses of him reflected in the eyes of his interviewees. “I might have some negative feeling about whites,” says Williams, gesturing at him as an example. “But guess what? I never met you!” Ever invisible but always present, Gibson himself becomes part of the story, a curator of the city’s elusive essence.

Gibson’s perspective on gentrification is similarly ambiguous at first, and then defined through his choice of participants. Tenants and radical leftists dominate the book’s conclusion, but he never ceases to play devil’s advocate when they toss out the word “they.” Gibson seeks to move away from the interpersonal wars and recognize that everyone—landlords and tenants alike—is vulnerable in a system that reduces all space to an investment opportunity, leading to the repeated valuation and devaluation of cities as capital flows in search of profit. This analysis of urbanization as a facet of capitalist accumulation is not new, but it’s refreshed in Gibson’s populist translation. For him, the cost of reducing land to capital is a loss of diversity—of incomes, perspectives, and skills—the very treasure celebrated and memorialized by his book.

Gibson ends by spotlighting people who have disavowed the profit motive. One of them is Bea Koutros, an octogenarian in Greenpoint, Brooklyn, who resists the temptation of fortune; instead of selling her former luncheonette, she allowed it to be turned into a community hub that is flourishing. In his final paragraph, Gibson pronounces that “it is impossible to write policy” that does what Koutros accomplishes. But why? What about Rob Robinson’s call for the banks to turn over properties to land trusts? Or Celia Weaver’s, for a rent freeze? We need nothing short of inclusive, collectivist understandings of space translated into policy.