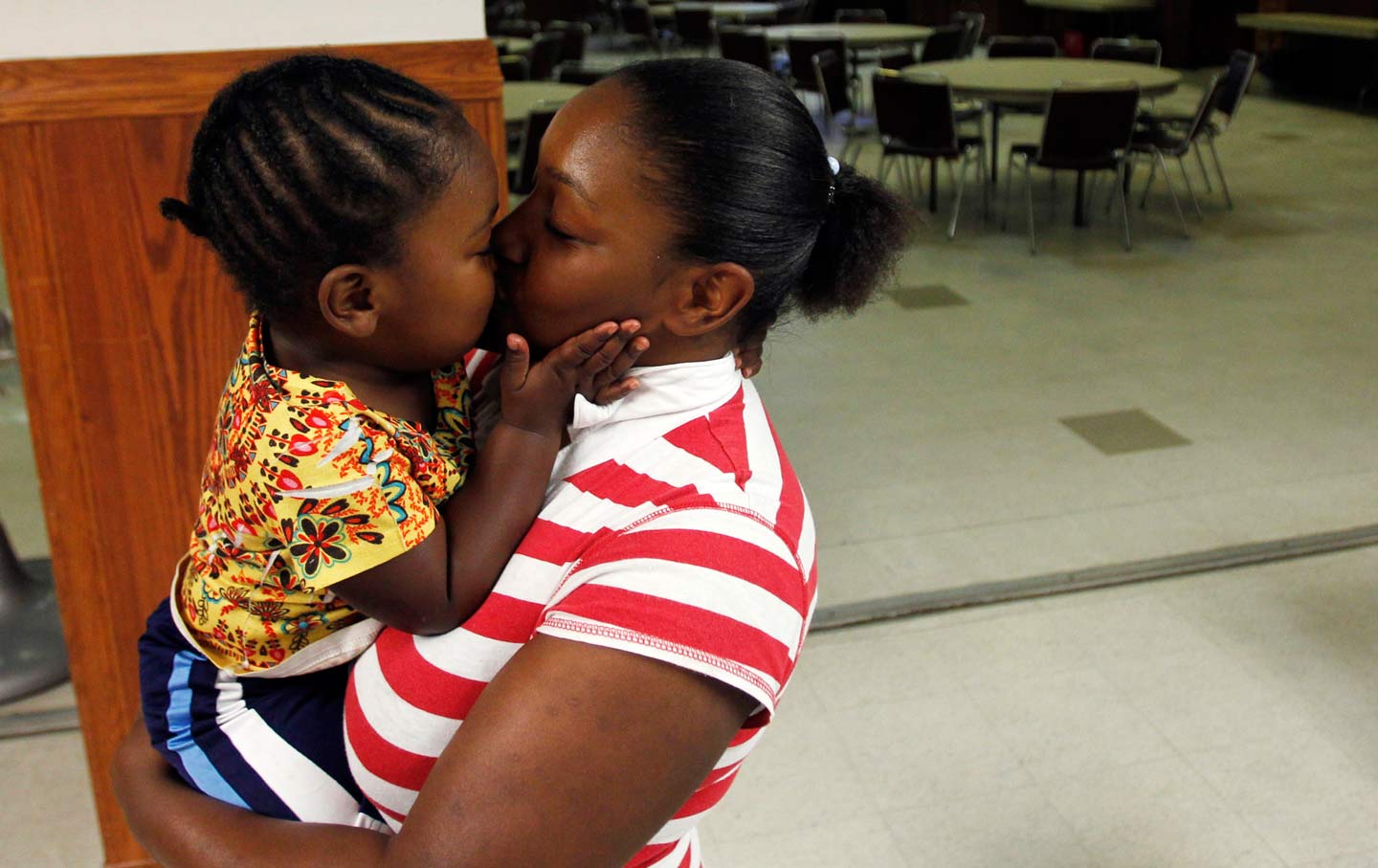 LaKia Ramsey, 26, gets a kiss from her daughter Arian, 2, at the Covenant Presbyterian Church temporary shelter. (Jessica Rinaldi / Reuters)

Pundits so rarely admit they were wrong that the first thing I want to say about Nick Kristof’s retraction of his previous support for welfare form is, Bravo. May it be the first of many such rethinkings on the New York Times Op-Ed page. (Looking at you, Tom Friedman.)

In his biweekly Times column last Sunday, headlined “Why I Was Wrong About Welfare Reform,” Kristof writes, “In 1996, President Bill Clinton signed a controversial compromise bill for welfare reform, promising to ‘end welfare as we know it.’ I was sympathetic to that goal at the time, but I’ve decided that I was wrong. What I’ve found in my reporting over the years is that welfare ‘reform’ is a misnomer and that cash welfare is essentially dead, leaving some families with children utterly destitute.”  Which brings me to my second thought: Oh, great, now he tells us. Did it really take 20 years to see where welfare reform was heading?

When welfare reform was being debated back in the mid-’90s, the media promoted stereotypes: the feckless teenage mom, families on the dole for generations, women with large numbers of kids by different men. Although most women on welfare were white, news coverage focused on those who were black or Latina. (Exhibit A was surely the notorious New Republic cover showing a young black woman smoking a cigarette and staring off into space while the baby on her lap drinks from a bottle. Headline: “Day of Reckoning.”) Kristof shrewdly centers his column on Bobbie Ingraham, a 47-year-old white Tulsa grandmother who is raising her small granddaughter Hailey alone because the child’s drug-addicted mother is out of the picture. Kristof presents Ingraham sympathetically: she adores Hailey; she acknowledges her past mistakes (using drugs, writing fake prescriptions for pain pills); she has serious health problems that make it hard for her to work. And here’s the thing: For people like Ingraham, there are no jobs. In fact, for people like her there never were. Even well-educated healthy-looking middle-aged women have a hard time entering the work force, as many a middle-class stay-at-home mother has discovered when she finds herself divorced and fending for herself. As I reported in this space, even in the late 1990s, when the economy was booming, welfare reform deepened poverty for the worst off. Not everyone is able to find a job and keep it. This basic fact was obscured by ideology: work good, dole bad. Lazy confused promiscuous women need a push. Who do they think they are?

It’s great that Kristof, an important voice, acknowledges that welfare reform has worked out badly, leaving more people poor, with less or no support, the funds given to the states insufficient and often diverted to other programs. His policy proposals are fine as far as they go: free long-acting birth control, quality early education, drug treatment, financial literacy programs, and “jobs programs to usher the poor into the labor force and bring them income.” But they don’t go far enough. Bobbie Ingraham’s problem is that she has essentially no cash income at all—she gets food stamps and owns her house but has no gas, electricity or water. How will she buy Hailey school supplies and all the other things little kids need? Surely what she and Hailey need is dollars. Kristof says it himself: “There are now more postage stamp collectors in America than there are families collecting cash welfare, and so kids like Hailey grow up in chaotic households in which there is simply no money.”

Maybe a well-designed jobs program would have led to employment, but would it have led to a job that pays $20.66 an hour, which is what MIT’s living-wage calculator estimates is what’s needed to support one adult and one child decently in Tulsa? According to payscale.com, probably not. In Tulsa, a customer-service representative makes $12.26 an hour, a medical assistant makes $12.60, an administrative assistant makes $14.94. Even a licensed practical nurse comes in under the wire at $18.24.

What Ever Happened to Welfare Mothers?

Kristof quotes two low-income women who oppose cash benefits because people would take advantage. But welfare is only payment for idleness if you don’t believe that caring for children counts as work. By raising her grandchild, Ingraham is doing something socially valuable, surely as important to our common life as the kind of minimum-wage precarious job she could conceivably get as a sick middle-aged woman with little work experience and a criminal record—a job that would still leave her poor. If she had not stepped in, Hailey would probably be churned from house to house in foster care, at tremendous state expense, or have been put up for adoption, which also has financial and other costs. Even discounting the benefit to Haley of growing up in her birth family, Ingraham is saving taxpayers quite a bit of money. Why would it be so wrong for the state of Oklahoma to subsidize her and give both her and Hailey a stable home life, utilities included?

Kristof says he wants to focus antipoverty efforts on children. Well, everyone loves kids, not that state budgets necessarily reflect that, but children live in families. You can’t give them a good start in life without helping their parents even when the parents are troubled, imperfect people. As long as we demonize poor mothers, and poor grandmothers, children will suffer. And as long as we see poverty as an individual moral problem, not a systemic one that affects whole communities, families will suffer and so will children.

One mother Kristof speaks with is raising four kids through odd jobs and opposes welfare—“If it was readily available, I’d abuse it; I’d say they’re giving me free money.” Viewed this way, welfare reform was always a race to the bottom: Why should someone else get something—anything—for free, when I am working my tail off? What if we turned that around and said maybe that mother of four shouldn’t have to work so hard to stay above water? What if we made sure all families had enough to get by? In Germany, Ireland, France, Scandinavia, the UK, Austria, and Canada, all families get cash benefits, not just poor ones. That is a major reason why child poverty is much lower in those countries than in the United States.

Universal family benefits can backfire. Like long paid maternity leaves, they can be structured in ways that keep women at home, by substituting for state-funded daycare and other social programs that make it easier for mothers to work. In Germany, they helped preserve patriarchal arrangements like half-days at school, phased out only recently, and encourage negative attitudes towards working mothers—popularly known as “raven mothers.” In some countries family support is explicitly tied to pro-natalism: Poland, for example, does nothing for women—no state funded daycare, a substandard health-care system, rampant job discrimination, a near-ban on abortion—but it’s now offering women around $125 a month for a second child. But family benefits are a way to express society’s respect for caring labor and take some of the pressure off today’s stressed families. Some—many—will object that money will go to people who don’t need it or deserve it or who cheat to get it. But as we see with Social Security and Medicare, giving all classes access to a benefit builds a strong base of support.

These days, politics is all about the middle class and those that have fallen out of it. Maybe the problem with welfare was that it only went to poor people.