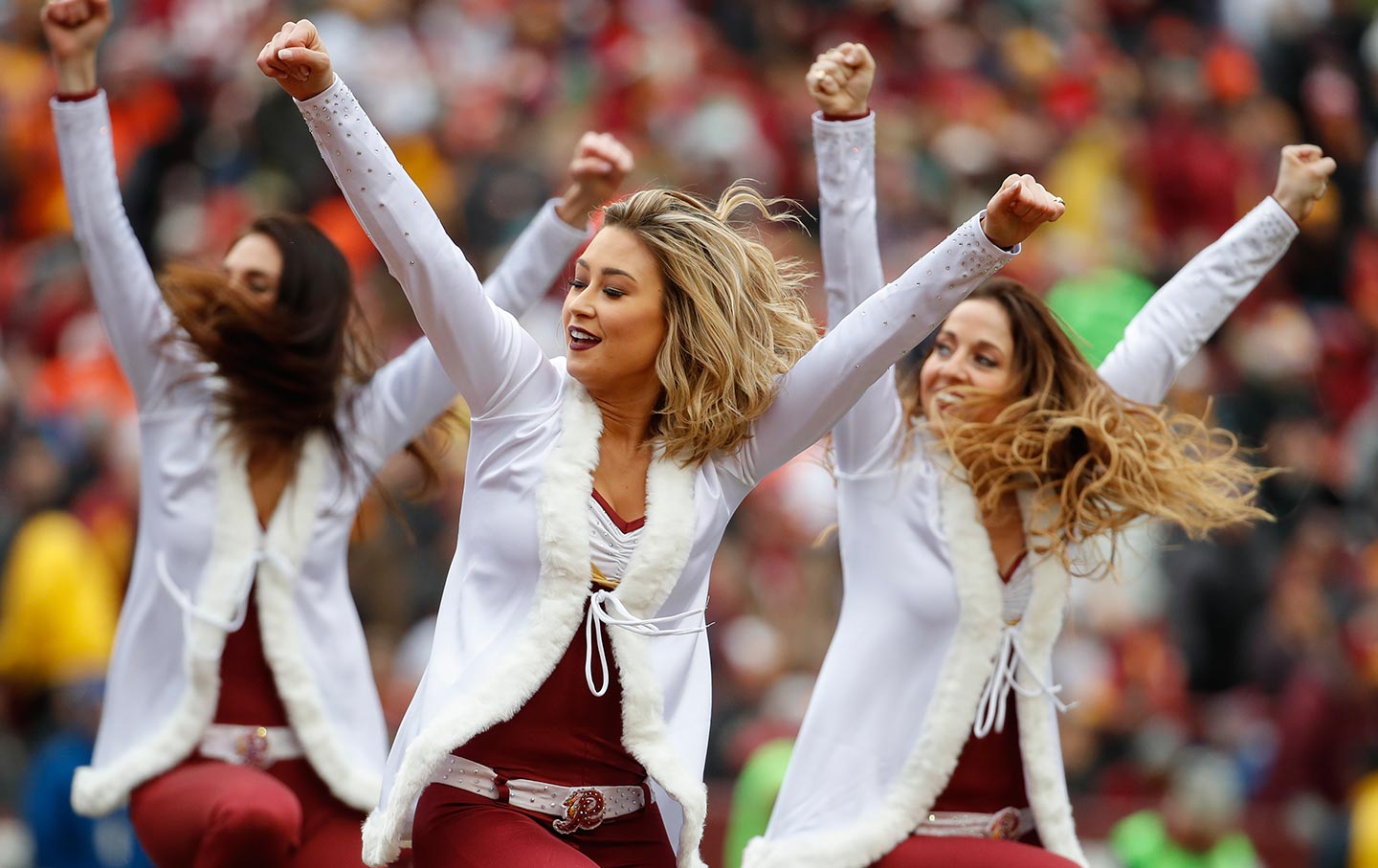 On September 5, 2017, the Washington Redskins football team hosted the Philadelphia Eagles in their opening game of the season. Players on both teams decided to dedicate the game to raising money for and elevating awareness about international human trafficking.

Maybe they should have started closer to home. In a bombshell exposé written by Juliet Macur for The New York Times, Washington cheerleaders have gone public about their treatment by team officials—and it’s a story that will cause you to grind your teeth into enamel dust. In 2013, 36 cheerleaders went on a team trip to Costa Rica to model for a team calendar. Like so much that NFL cheerleaders do, this was an unpaid gig. To their surprise, upon landing, the cheerleaders say that their passports were seized by the team. Then, while preparing to be photographed on a private beach, they were asked to pose topless, even though there would be no topless pictures in the calendar. They also discovered that they had some unwanted guests: a select group of corporate sponsors—all men—who were on site to gawk at the cheerleaders as they posed. It was so uncomfortable that the cheerleaders formed human screens so their colleagues could change without being harassed.

Then, somehow, the story devolved further. After a 14-hour day, 9 of the 36 cheerleaders were told that their day was just beginning. Sponsors had picked them to be their “personal escorts” for the evening. Several started to cry. As Macur writes, “Their participation did not involve sex, the cheerleaders said, but they felt as if the arrangement amounted to ‘pimping us out.’ What bothered them was their team director’s demand that they go as sex symbols to please male sponsors, which they did not believe should be a part of their job.”

They were sent to a dark, near-empty nightclub in a van. Afterward, at “about two or three o’clock in the morning,” finally able to return to their hotel, they were stopped by Costa Rican police who asked for their passports. Their passports of course had been seized by the team. The cheerleaders thought that the police assumed they were sex workers, until they were able to prove otherwise.

Macur has more stories of parties on yachts for team sponsors, secret twerking parties, and more. It’s sleazy and reads like nothing less than the trafficking of these women. In commenting about their cheerleading program, all the team would say was, “The Redskins’ cheerleader program is one of the NFL’s premier teams in participation, professionalism, and community service. Each Redskin cheerleader is contractually protected to ensure a safe and constructive environment. The work our cheerleaders do in our community, visiting our troops abroad, and supporting our team on the field is something the Redskins organization and our fans take great pride in.”

Yes, they didn’t respond to these particular allegations and instead chose to hide behind “the troops.”

It is certainly difficult to hear this and not think about the case of the wrongful-termination lawsuits of cheerleaders Bailey Davis and Kristan Ware, which we covered here at The Nation last week. Davis was fired for posting a picture of herself in a bathing suit on Instagram. The dismissal of Ware was for talking publicly about her decision to not have sex before marriage. Both of these cases reveal the people running these cheerleading squads as treating the women—and their bodies—like commodities.

I spoke to Ware and Davis’s attorney Sara Blackwell about the Washington football story.

“First, I am so proud of these girls for speaking out and telling the truth,” she said.  “I hope it encourages other women to be brave and tell their stories. I have been in contact with many former NFL cheerleaders from many teams, and there are a lot of unlawful and egregious things going on within most NFL cheerleading teams….[NFL Commissioner] Roger Goodell has to do more than provide a canned statement to the media that the cheerleaders deserve ‘a professional environment free of discrimination and harassment.’ He needs to ensure that they are given what he says they deserve.”

Blackwell also offered her opinion on a sports commissioner who sticks his head in the sand, time and again.

She said, “My personal feelings on Goodell at this point are that he has a very low regard for women.  He is not doing anything to address these issues.  He is not speaking out against these awful practices.  He has a history of not doing the right thing for abused women who have suffered at the hands of his moneymakers.  Goodell needs to stand up for the women in his league.  He has a duty to the women in his league.  We are living in the time of the #TimesUp movement, and Goodell needs to step up here or his time is up at the NFL.”

Blackwell also pointed out how easy—and cost-effective—it would be for Goodell to fix what ails the league. “He can have NFL rules and regulations that apply to teams and cheerleaders that protect the women and ensure the laws are followed. It costs the teams zero dollars.  It prevents future lawsuits, so it saves the NFL money. But, Goodell has no regard for women and has refused, thus far, to deal with these serious issues. I challenge sponsors of the NFL to demand change. I challenge fans to refuse to attend games. I challenge football players to take a stand.”

The treatment of cheerleaders in the NFL is a disgrace. There is an easy answer: they can pay them decent wages and cover them with basic labor protections. That the league cannot accomplish these modest goals speaks volumes about both Roger Goodell’s leadership and his league. The answer is not to abolish cheerleading, as some have suggested. It’s a union for these workers so they can collectively bargain for what they deserve.