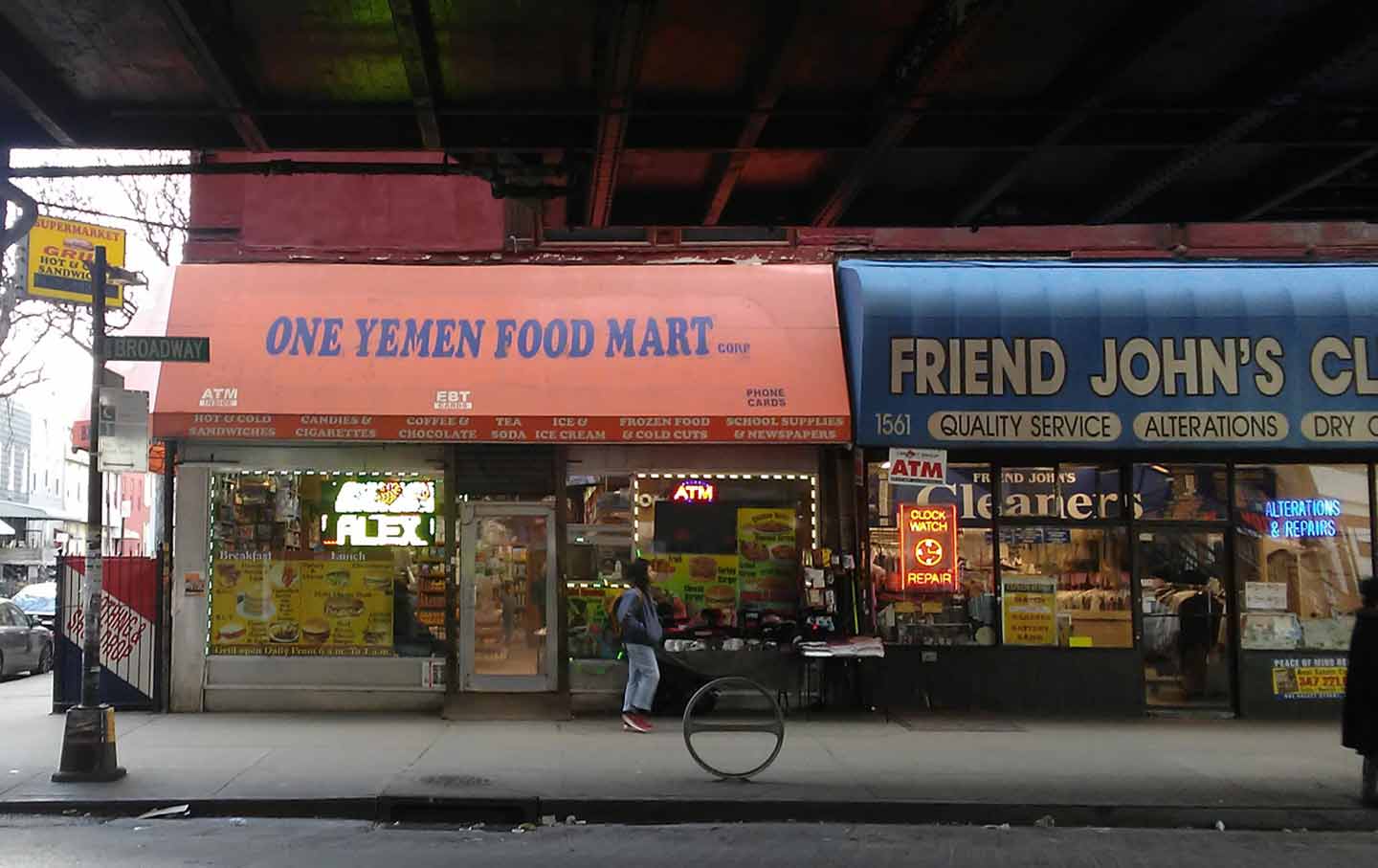 One Yemen Food Mart in Brooklyn on February 2, 2017. Bodegas across New York City are on strike in protest of Donald Trump’s racist travel ban. (Nathaniel Pinheiro)

The message is clear: Muslim lives don’t matter much to this administration, even if the government’s policies touch US citizens like this little girl.

To protest Mr. Trump’s immigration policy, Yemeni bodega owners across New York City closed their doors to customers today. They also plan on gathering at Borough Hall in the late afternoon for a rally. It’s the first major action organized by the Yemeni community, whose members run hundreds of grocery stores in the five boroughs according to organizers. The strike comes days after New York City cab drivers refused to take passengers to JFK airport, in protest of recent detentions of Muslim travelers there.

For the many immigrants from the seven countries—who play an integral role in New York City’s communities—the rules hit close to home. Ali Abdul, who works at the Yafa Deli on Fulton Street and Clinton Avenue in Brooklyn, is planning on going to the rally. This morning, he spoke of a friend who had waited years for a visa to come to the United States, but was sent back to Djibouti from his connecting airport in Qatar last week because of the ban. “It doesn’t affect me,” said Abdul. “My kids and wife are US citizens. But it makes me sad for other people. This kind of discrimination has been happening for a while, but now it’s happening more, even though we have three generations of Yemenis in America now.”

He turned away to place orders for a breakfast sandwich and bag a soft drink for a young customer. A notice to his right declared that cigarettes would not be sold to anyone born after 1996—the same year Abdul moved to the States. “This is my country. When I go back, I’m a visitor. Yemen is just for vacation; this is where our lives are.”

Yafa is a typical Brooklyn bodega—plastered with notices about ATMs and EBTs on the outside, overstuffed with snacks and conveniences on the inside. Yafa’s famous for its fried chicken, which comes in a half-dozen configurations (leg, thigh, breast, or combo; with or without fries), and today was being served by a Bangladeshi employee preparing to cut his workday short. The striking stores took mercy on the uncaffeinated morning crowd and stayed open in the morning, but won’t serve customers during the busy lunch hours through 8 in the evening.

An informal survey of bodega workers in three neighborhoods in Brooklyn suggests that they risk losing between $500 and $1,500. It’s a big financial hit for a small business—especially since many of the workers at these stores, while sympathetic to the strike, said they weren’t expecting much to come of it.

Youssef Eldilan, a 19-year-old with a shy smile and a reserved manner, was on shift at the NBA Deli Grocery on the corner of Nostrand Avenue and Halsey Street this morning at 10. His uncle owns the store, which claims, like many of its competitors, to make “the best sandwich in town.” Eldilan was able to move to the United States from the Yemeni city of Ipp in 2005 because he had family here, but even prior to the new policy, it was hardly a cakewalk. “I was 5 or 6 years old when we started the visa process,” he said from behind the counter. “Even before [Trump’s ban], it was difficult to move.”

Eldilan doesn’t have particularly high hopes for would-be immigrants in the next few years—“How are they gonna come? They can’t come!”—and thinks that’s a shame. “Everybody loves America,” he says. He sees the strike as a way to send a message, and maybe push Trump to soften his views. “Maybe he’ll come down a little bit.”

On the next block, Sean Nagi, 28, and his nephew Khalid Nagi, 16, mock-wrestled between serving customers at the A&Z Deli. Sean Nagi was born in the United States and has lived here his entire life; he wore a Bulls cap and a trendy jersey, and spoke with a strong Brooklyn accent. It would be absurd to describe him as anything but a hyper-local; he’d stick out like a sore thumb anywhere but the United States. “All my life is here,” he says.

Still, Sean is accustomed to the low hum of discrimination. “It was never easy. You still get pulled into the room for questioning, you still get questions.… It’s a regular thing,” he says against the convenience-store backdrop of Aleve, condoms, and tampons.

As a US citizen, the ban won’t affect him directly, but Khalid, who’s a senior in high school and would neither deny nor confirm that he was cutting class, was hoping to go on a school trip abroad this summer. He’s only been in this country for four years, but is now wondering if he’ll be able to leave—if his parents even let him take the trip. Shortly after noon, the men were waiting for the shop’s owner to tell them when to close up; regulars dropped by inquiring about the strike, and a classmate of Khalid’s burst in to complain about the class she’d just finished.

“Why ain’t you closed yet?” she asked. “Are you gonna protest?” Sean Nagi shrugged. “My shift’s over.”

“Your fat ass ain’t gonna protest, you’re gonna go upstairs and sleep!” she said. “But you are!”

Khalid held up a flimsy Yemeni flag he was planning on taking with him. They would close as soon as they received the order.

Two avenues over, at the Halsey Gourmet & Deli, the doors were shut at 12 sharp. At ten after noon, a young African-American UPS deliverywoman walked by with her cart and tried to walk in, but the door was locked. She read the sign on the door announcing the strike out loud:

The mailwoman rapped three times on the door. “I got your mail, open up!” Even for mail, the man inside would not budge.

“C’mon, it’s not us, we love you guys!” she protested, and started pushing letters and flyers under the door. Then, she caught a glimpse of the man through the window and laughed. “Hey, you Mexican! What you doing?” The man shrugged; she continued on her mail route, visibly amused.

From his perch at the window, the deli worker watched her leave. He peered out. His English was not great, he said, but he was happy they were closing. “I think it’s very, very good.”