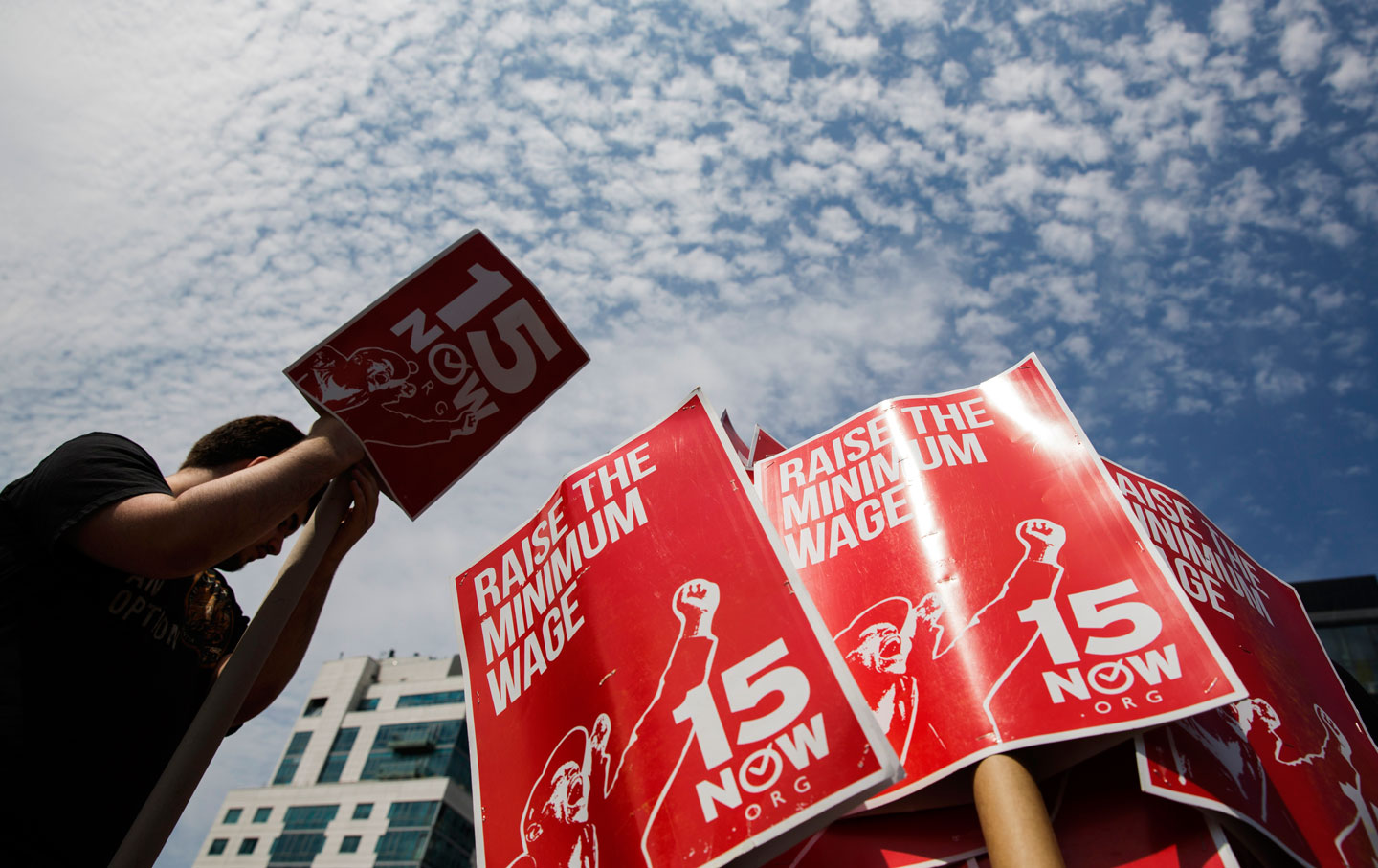 Though New York’s lawmakers are infamous for their ethical failings, Albany is about to do the right thing for once: serve the state’s fast-food workers some long-overdue justice. Governor Andrew Cuomo’s Wage Board, a three-member panel representing business, labor and the public, has for weeks heard gut-wrenching testimonies from workers and labor advocates at hearings across the state, and is now expected to recommend raising the minimum hourly wage for fast-food workers to $15. That will impact some 180,000 people currently earning around $16,000 a year doing strenuous, dirty work in drive-throughs and greasy kitchens. The governor is then expected to make final approval to set a new sector-specific wage—a unique mechanism that, similar to President Obama’s recent executive actions on federal worker wages, can bypass the legislature. The measure marks a major milestone for the Fight for 15 movement, which started in New York over two years ago when a small group of workers decided to walk off the job.

[Update: The Wage Board has announced an incremental timetable to raise the wage to $15 an hour by the end of 2018 in New York City and 2021 statewide, for fast food outlets belonging to “chains that have 30 or more locations nationally.”]

In recent weeks, workers aired words of pride and despair; they cheered each other when they started getting nerves, having developed camaraderie after participating in strikes to demand a fair wage and the right to form a union.

At a June hearing in Albany, some of the poorest workers, in one of the richest states, related stories like being stuck working a grill because they couldn’t afford to finish their degree. A young man talked of wiring money home to the Dominican Republic to support relatives, and begging for train fare just to get to work.

Yet, while New York’s current minimum wage of $8.75 an hour clearly isn’t enough to live on (many fast-food workers rely on public benefits), the demand for decent pay has met with fierce corporate resistance. Some industry representatives have warned that raising wages too quickly could lead to job losses, or if the standard was too strict, could force “mom and pop” eateries out of businesses. But the voices with the strongest resonance articulated the simple luxuries that a living wage could bring: a single day off, or a chance to move out of the homeless shelter.

Some employers actively advocate for a policy to push wages up across the state. Amy Collins, owner of New Shelves Publishing Services stated that she paid her own workers a starting wage of $15 an hour, so the massive multinationals of the fast food industry had no excuse: “If I can afford it, so can McDonald’s.”

The workers could certainly teach their bosses about careful budgeting. Parents packed cheap burgers all day and returned home without money or time to cook a decent meal for their families. Students shuttled from one job to another until they were too exhausted to study. A young father of a toddler, Pierre Odilus Metivier, testified, “Sometimes at school I can’t help but fall asleep… I know I’m not getting the most of my education.”

Rosa Rivera, a soft-spoken grandmother who supports three generations on $8.75 an hour, after working in fast food for several years, explained tearfully in Spanish how she feared that taking her children and five grandchildren out for just one meal could consume half a day’s wages.

An Albany Burger King worker recalled budgeting on paychecks as low as $30, sometimes “barely eating” as he worked to provide care for his wife’s epilepsy and study to be a medical assistant. “People always say that fast-food workers should do something with their lives, but I am doing something. When you have family to take care of, and you are a man, you will do whatever it takes to provide for your family. But I need to survive until I can get to my career goals, and I refuse to increase the population of the prison system.” It was just one of many grim calculations he had to make each day: “I don’t sleep most nights,” he added flatly.

Junior Gonzalez talked about dealing, at 22 years old, with asthma, bipolar disorder, thousands in student debt, choosing between paying car insurance or rent, and forget about money for medication—on top of an expired nursing certification: “I want to go back to nursing, but…I can barely pay for toilet paper, so I can’t pay for a nursing license.” His bank balance that day, he said, was $34: “I just got paid. That’s ridiculous.”

The impossible mathematics of low-wage life seems even more absurd now since Los Angeles just raised its city and county minimum wage floors, following similar initiatives in Seattle and San Francisco and many others pending around the country.

The details of the anticipated wage hike, including which outlets would be subject to the higher pay-scale, are still unclear. But advocates hope the process will eventually spur lawmakers to raise the state minimum wage, which would provide consistency across different sectors. (Although the Board, facing public pressure over fast-food labor conditions, was convened to deal with this sector specifically, a broad wage hike would likely have a ripple effect.) This might also encourage some franchise operators to partner with the Fight for 15, to collectively pressure the fast food corporations to stop squeezing operating costs for its franchisees, which could enable workers to be paid more.

Anita Halasz, executive director of Long Island Jobs with Justice, says the Long Island wage board hearing shed light on a hidden reality in New York’s suburban communities, which few associate with chronic poverty but are nonetheless rife with inequality. “I think this is shifting the overall consciousness of what it means to be a low-wage worker,” she says, “and… has helped many people recognize, through the testimonies of fast-food workers, that workers who are working in low wage jobs, struggling to survive, is an epidemic.”

Matt Ryan, executive director of ALIGN NY says if Albany takes the next logical step and raises the statewide minimum wage for all workers—it shouldn’t be politicians who take the credit: “The only reason we’re even in this situation right now… is because of the courageous workers…who’ve been striking year in and year out, community allies who’ve been on the front line with them, and the pressure they’ve been able to bring to bear.”

At the end of the day, after hearing the stories of New Yorkers wrestling with the hardest choices, the Wage Board had a shamefully easy final decision to make—yes, they deserve more.