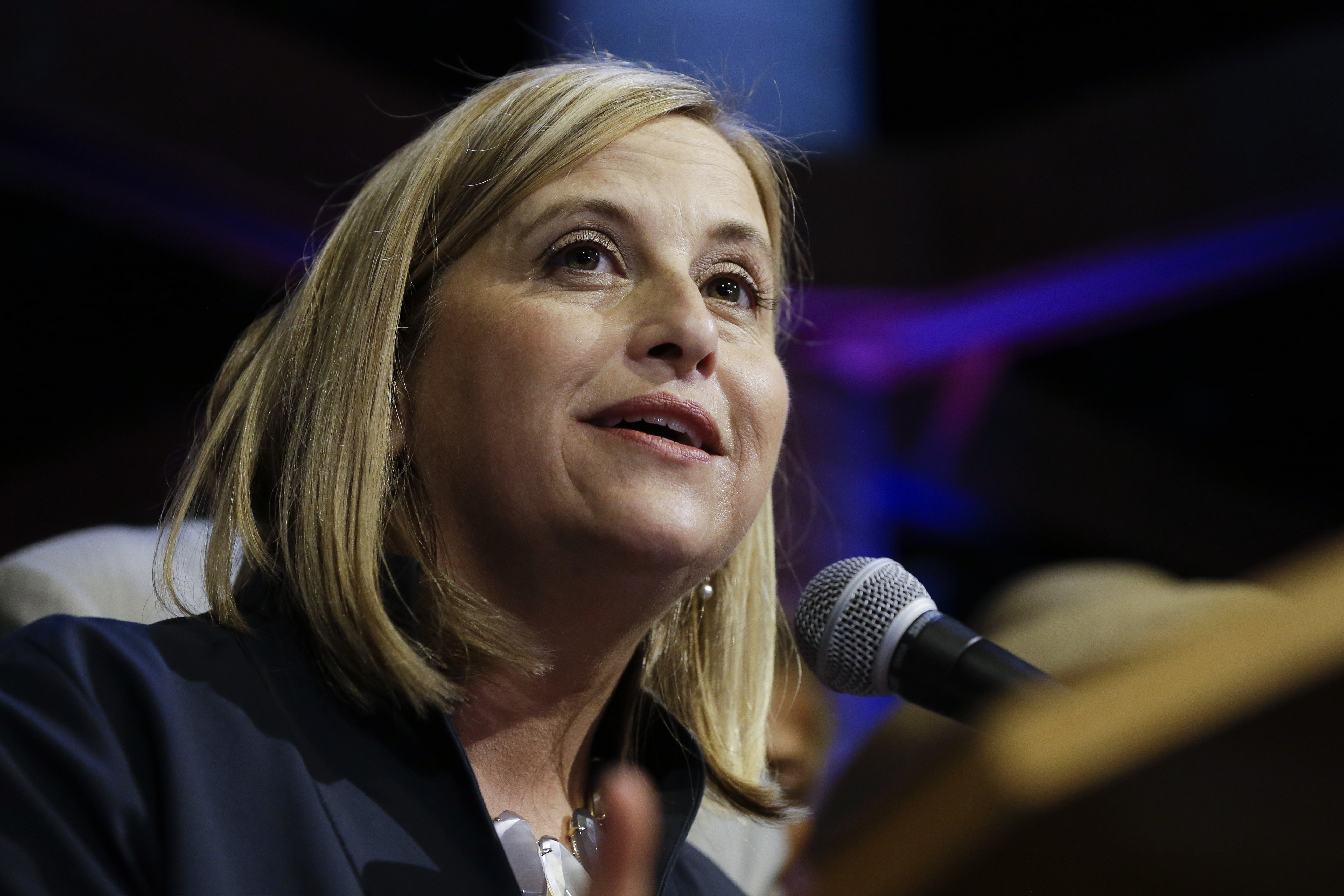 Megan Barry speaks to supporters after she was declared the winner of Nashville's mayoral race. (AP Photo/Mark Humphrey)

Megan Barry mounted a smart and nuanced progressive campaign for mayor of Nashville—so smart, and so nuanced, in fact, that it should cause political candidates and commentators to rethink what can be said and done on a political stage that is too frequently characterized by bluster and bombast.

Even if Barry had not won Thursday’s runoff election for the Tennessee city’s top job, her campaign would have been instructive. Because she did win, with a decisive 55-45 margin over a free-spending hedge-fund manager who suggested she was too liberal to lead a Mid-South city, Barry’s victory offers a powerful reminder that another politics is possible in cities across this country.

Barry, an at-large member of the Metropolitan Council for Nashville and surrounding Davidson County who will serve as the city’s first woman mayor, earned national attention as a liberal leader in a southern city. (A New York Times article even noted that: “On a recent visit to her home near Vanderbilt, where her husband is a management professor, a copy of The Nation magazine sat atop a copy of Southern Living.”) And her campaign certainly hit plenty of progressive themes. She hailed diversity, declared that the police must treat everyone equally, highlighted the need to respect immigrants, embraced sustainability, and celebrated public transportation.

But it was on a host of economic issues that Barry distinguished herself. She criticized privatization, talked up public programs, and said three things that marked the expert of business ethics and corporate social responsibility (who included footnotes with her campaign pledges) as a significantly more serious contender than most local, state, and national candidates.

First, as part of her economic development platform, she specifically explained that “the private sector can’t do it all” and argued that it is appropriate to use “public investment to stimulate sectors of the economy that will benefit from a jumpstart.” While she made a savvy case that public projects must be evaluated “in a way that is clear, unbiased, and fully transparent”—and while she has faced thoughtful criticism for backing number of  “economic incentives deals, laden as they are with tax breaks for massive corporations”—her platform rejected the fantasy that only the private sector can stimulate job growth and address wage stagnation. That’s a vital understanding at a point in history when failed austerity schemes and privatization gambits are still peddled by politicians who should know better.

Second, she reminded voters that “economic growth and wage growth are not the same thing.” This is a big deal. Candidates regularly pledge to create jobs if they are elected. Wisconsin Governor Scott Walker has taken hard hits during his current presidential campaign for failing miserably when it came to keeping a promise to create “250,000 new jobs” in his first term in the statehouse. But Walker should be taking even harder hits for attacking unions, cutting support for public education and public services, and establishing unthinking economic-development policies that failed to focus on retaining and creating high-wage, family-supporting jobs. The same goes for elected officials nationwide. In contrast, Barry’s campaign respected economic realities—and the intelligence of voters—by saying, “Smart growth means using the tools at our disposal to attract investment to attract good jobs that enhance our local economy, not just any jobs whatsoever.”

“Smart growth also means thinking clearly and carefully about how the investment and development we cultivate affects the city we have—its current citizens as well as the cultural fabric of the neighborhoods in which they live and work,” explained Barry. “We have seen in recent years how private-sector investment can reinvigorate parts of town that desperately need it, and even create almost out of whole cloth vibrant new areas of the city… But the next mayor cannot lose sight of the fact that neighborhoods are the fabric that knits together a livable city. We have to ensure that the economic development we covet doesn’t degrade the quality of life we cherish.”

Third, Barry addressed poverty with a seriousness—and a frankness—that candidates, even at the presidential level, rarely muster. Arguing that “economic growth doesn’t automatically lessen poverty,” she challenged the conventional wisdom that claims a rising tide lifts all boats. “It is a widely held assumption—and a reasonable one on its face—that jobs are a key remedy for poverty. A natural extension of this belief is that job-creating economic development is the best anti-poverty program there is. Unfortunately, the data tell a somewhat different story,” explained Barry. While Nashville has experienced job growth, significant private-sector investment and increased tourism, she noted that “we are not seeing a reduction in economic distress in our community.“

﻿“Our working families need a mayor who is going to create prosperity for everyone.” —Nashville’s Megan Barry

Noting that the county’s poverty rate stands at “a disconcerting 19 percent” and that “more than 30 percent of Nashville’s children live in poverty,” Barry reminded voters that “These numbers (for 2013, the most recent year of available data) are markedly higher than the corresponding national figures. And mirroring what is happening nationally, they are trending up, not down… ”

“There are a variety of reasons why poverty is up, not down, in the last decade (the financial crisis not least among them), and comparisons across years have to be made with caution because of how poverty measurement is done year to year,” reasoned Barry. “But the numbers do paint a picture that is consistent with a larger economic narrative in the U.S.: that prosperity and inequality can work at cross-purposes. We may be a city with more investment, more jobs, more newcomers, more tourism, more energy, and more good press than ever before, but we are also a city with more poverty.”

Refusing to engage in the happy-talk politics that neglects the stark details of an economy that does not work for the poor, the mayoral candidate wrote:

That reality should weigh heavily on the mind of the next mayor; it will on mine. All of the areas of public policy that are front and center on the city’s agenda—education, jobs, transit, healthcare, public safety, investment—are interwoven with the reality of rising economic inequality that plagues our city just as it does our country. I plan to be a mayor who actively factors the need to alleviate poverty and inequality into the decisions we make about all of the issues before us, not one who imagines that as long as we keep growing the rest will work itself out. It doesn’t work that way, and we know that it doesn’t.

Barry bet that Nashville, a city that leans Democratic but that has tended to elect predictably moderate mayors in recent years, was ready for a deeper discussion. Her wealthy opponent, David Fox, ran an expensive negative campaign that, the Nashville Tennessean reported, “set out to define her as a liberal far outside Nashville’s mainstream driven foremost by national social issues.” Swipes were taken at the candidate’s husband, Bruce Barry, a Vanderbilt University professor and the author of a number of vital books (including Speechless: The Erosion of Free Expression in the American Workplace), for his work with the American Civil Liberties Union of Tennessee. A whispering campaign claimed the Megan Barry was an atheist.

When all was said and done, however, Barry build a strong coalition of women, people of color, lesbians and gays, trade unionists, affordable-housing activists, and musicians such as Emmylou Harris, which gave her a solid victory in the nonpartisan race. On election night, she celebrated at the Nashville Farmers’ Market, telling a diverse crowd of supporters, “This is really a story about our working families, and those families are the backbone of our economy who need access to transportation, excellent public education and affordable places to live. Our working families need a mayor who is going to create prosperity for everyone.”

If Megan Barry governs as thoughtfully as she campaigned, she will join the growing list of progressive mayors who are showing state and federal officials how it should be done.