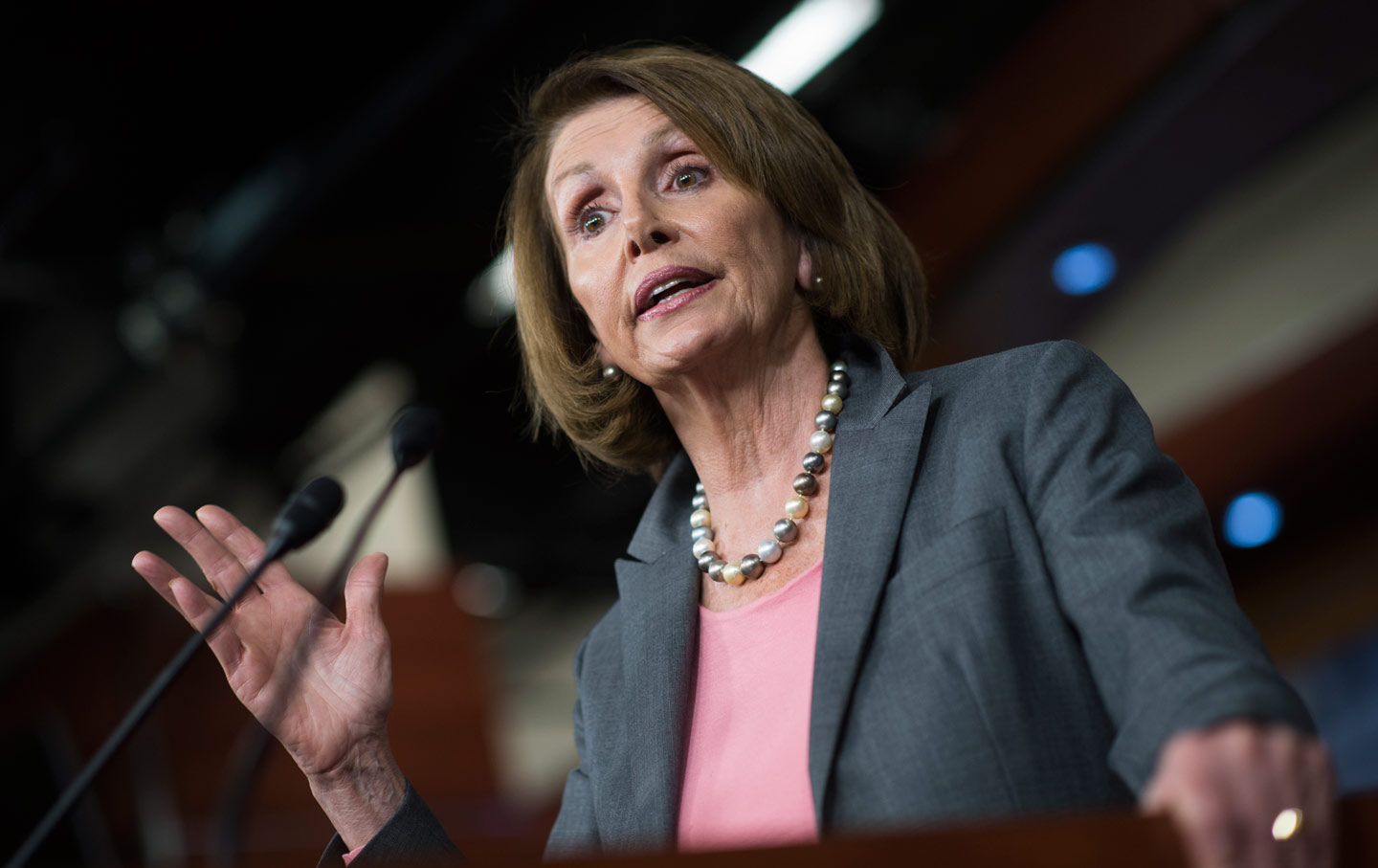 House Minority Leader Nancy Pelosi, like a lot of Democrats, still isn’t over election night and Hillary Clinton’s stunning loss to Donald Trump. “Just when I think I’m getting better I see another announcement of somebody he’s appointed to the Cabinet and I think, ‘Oh, this is cataclysmic.’ But as I say, we don’t agonize, we organize.”

As Democrats debate their dimmer future—Did they lose because they overemphasized issues of racism and sexism? Was it FBI Director James Comey’s shocking late disclosure that he found more Clinton emails? And going forward, should party leaders in Congress engage with the Trump administration, or stick together to fight it? I had a phone interview with Pelosi to talk about all of this, and more.

Unfortunately, she has been here before, or close, anyway: Pelosi was elected minority leader after George W. Bush won reelection, and she was credited with helping turn around Democrats’ fortunes in 2006 and ’08 by focusing on Bush’s unpopular proposal to privatize Social Security and the disastrous Iraq War. As she runs for her seventh term as leader—she’s facing a challenge from Ohio Rep. Tim Ryan—Pelosi is promising to again focus her caucus on fighting a disastrous Republican president and on investigating the already scandal-plagued Trump administration, including evidence that he benefited from foreign hacking, as well as FBI interference, before the election.

And while she says Democrats failed to deliver a sharp economic message during the election campaign—and then corrects herself to say “some of the [media] coverage took us away from the economic message,” her sharpest criticism is for Comey. Democratic turnout was depressed, and late-deciding voters went overwhelmingly for Trump, she notes. “I put that at the doorstep of Comey. How a man who could say, ‘I cannot sign the consensus intelligence document that says the Russians hacked the Democrats, because it’s too close to the election,’ then in turn, do a letter saying that they found more e-mail, that might be insignificant, 12 days before the election—which [former New York mayor and Trump supporter] Giuliani perhaps had a lead on? The heat from Republicans in Congress, and in the FBI, was too much for him.” She promises her caucus will investigate that issue, and more.

Here is our conversation, edited for length and clarity.

You were minority leader in 2005 and 2006, under George W. Bush. Those were tough days for Democrats. What lessons do you take from that?

Here’s the thing: The press paid more attention to Harry Reid and to me, as minority leaders under a Republican president, because we were the voice of the opposition, than they ever did, as Speaker of the House and Majority Leader, under a Democratic president. The media’s attitude is, ‘We have a president, what does he think?’ So Republicans are going to find out that unless they’re attacking their president, they are the lounge act of Washington politics. What did succeed was the formula we had to stick together with a unified message, pointing out what they were doing that was wrong, going forward with an agenda for the future.

Democrats I talk to are concerned about the very close election results. Can House Democrats get involved in asking questions about that?

House Oversight Committee ranking member Elijah Cummings, who is so spectacular in holding Republicans accountable, has already asked for an inspector general’s report on the FBI, why they did that, how Giuliani seemed to know sooner, and all that. Then, the second issue, let me say it: Even if Hillary Clinton had won, I still think it’s imperative to have an investigation into the fact that a foreign government had influence in our election. And they did. They were only releasing emails from the Democratic side, and you knew that there was an agenda here. And quite frankly, I don’t think the press did enough to say, Hey wait a minute, why are you just doing e-mails from one side?

Something was happening right before our eyes, in plain sight, every day. I absolutely believe, and I talked to Elijah about this already, that we should have an investigation into foreign influence into our election. There is also interest in finding out: We don’t have paper ballots in every place—what is the record? Show us what this is. It’s not going to overturn the result of the election—probably. But even if Hillary had won, this has to be investigated, and this is a big opportunity because it’s fresh, it’s current and who knows, ongoing?

You were quoted right after the election as saying Democrats can work with Trump on a “robust” infrastructure bill. But aren’t you worried that legitimizes someone whose early appointments, from chief strategist Steve Bannon to Senator Jeff Sessions as attorney general, show at minimum a disregard for civil rights?

The conversation about “engage or oppose” is going on in the party, throughout the country, and I think two to one people say, “Just oppose.” But the fact is, if you’re advocating outside, that’s what you can say, but if you’re inside, you have a responsibility to find common ground. But that doesn’t mean embrace their proposals.

On infrastructure, it has always been bipartisan, until President Obama became president. We believe in infrastructure as a way of creating good jobs in this country, of promoting commerce…clean air, clean water, mass transit. If it’s going to be a tax break and privatization effort disguised as an infrastructure bill—that’s not what we’re talking about. I hope that’s not the case because we really do need an infrastructure bill. But we can’t make matters worse. Democrats will not, for the aura of finding common ground, succumb to supporting what we don’t believe in. We have good ideas about infrastructure, and we hope the president-elect would be open to them.

We thought we were going to get to watch the Republican Party, in defeat, debate what they did wrong. Instead, we’re having to ask what the Democrats did wrong. And we are now having a debate about whether Hillary Clinton emphasized “identity politics” over an economic message. That’s Senator Bernie Sanders’s claim. Some of us hear that and worry that women and people of color are being thrown under the bus. What do you see going on?

In our caucus, we hear both sides. Our caucus is united by values, nobody is saying we should abandon anyone, but we do have to increase our communication with those for whom we are here, but they don’t realize that. It’s not a zero sum game. In terms of the economic piece: We did the bailout of the auto industry, and we’re losing Ohio, Michigan, Indiana, Iowa, Wisconsin? Part of it is, we didn’t take enough credit. We’re not going to diminish our commitment to who we are and what we believe in. But we’ve been there for the working class: on collective bargaining, occupational health and safety, the National Labor Relations Board.

Donald Trump is a phenomenon, but I don’t think many people voted for him to voucherize Medicare. House Speaker Paul Ryan wants to voucherize Medicare. Where is Donald Trump on that? The head of his Social Security transition team, Tom Leppard, ran for Senate on a platform of privatizing Social Security and Medicare. Where is Donald Trump on that? We have to remind people that Mike Pence voted three times for the Ryan budget, which would have voucherized Medicare and removed the Medicare guarantee. If that throws discord into their unity, so be it. The “keep your hands off my Medicare” crowd, now, where are they? He did say during the campaign that he wasn’t going to touch entitlements. Now we need to know where the president stands.

Your challenger, Tim Ryan, says the caucus needs new leadership, not from the coasts. How do you respond?

I’m not asking people to support me based on what I’ve done. I’m asking them to come with me down a path that I’ve orchestrated, and I can do again. And their increased enthusiasm to participate I don’t view as anything other than music to my ears. I’m going to create new committee co-chairs. Our ranking members on the committee are receptive for a stronger role for their members. I’m not spending my time on the rest of it. I’ve been challenged almost every time. What I don’t like is that, when I’m challenged, the press plays it, “Is it time for Nancy Pelosi to go?”

For all of the challenges we face, we have to make sure the public understands what’s at stake. I think our message was right, but there are questions about the communication of the message. Now we are the first line of defense. And I feel heartbroken over what’s at stake. This is cataclysmic. Hillary would have been such a great president. We’ve missed an opportunity, but we have to find the opportunity that creates.