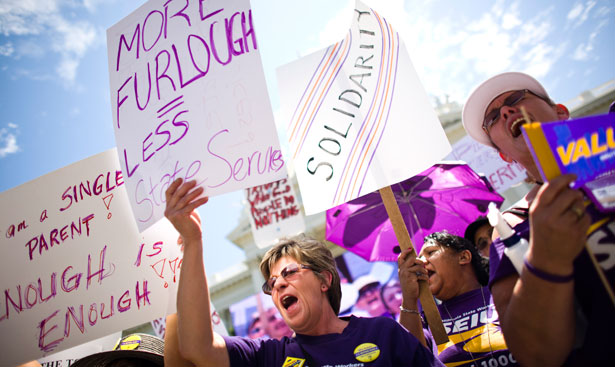 In President Obama’s own words, too many American workplaces resemble scenes from Mad Men. Many employers’ attitudes toward family-friendly reforms seem to stem from the same unenlightened era—that is, at least, until they see the bottom-line results that these reforms can inspire. For a nation that claims to value family, the United States has an abysmal record on family-friendly workplace policies. Without access to maternity and paternity leave, affordable childcare and paid sick leave, working parents have almost no flexibility to balance the needs of their families with the requirements of their jobs. In short, when it comes to family-friendly labor policies, America is, indeed, exceptional—exceptionally backward.

Take paid sick days. As I’ve written previously, more than 40 million Americans, mostly low-income workers, lack access to paid sick leave. No matter how ill they are, they must clock in—and they could lose their jobs if they stay home to care for a sick child or aging parent. Meanwhile, childcare remains prohibitively expensive, and the United States has yet to enact universal pre-K, all of which leave even middle-class working parents with few affordable options for their little ones.

Then there’s maternity and paternity leave. Today, around 2 million men stay at home to raise their children. Beyond that, even the masses of men who aren’t primary caregivers are increasingly involved in the details of childrearing. But while men are more hands-on than ever before, they are nevertheless experiencing more conflict between their work and family roles than they did thirty years ago.

Under the Family and Medical Leave Act of 1993, many, but not all, employees are allowed to take up to twelve weeks of unpaid leave for things like illness and the birth of a child, without the risk of losing their jobs. However, up to 40 percent of workers do not meet the law’s strict eligibility requirements. The United States is the only Western country that does not mandate paid maternity leave—and just 14 percent of employers offer paid leave for new fathers. Moreover, while new mothers physically have no choice but to take at least some time off—even at the risk of losing pay or even their jobs—one study found that 86 percent of working fathers would not use paternity leave unless they were paid at least 70 percent of their salaries. The same study revealed that fathers generally take a meager two weeks off from work after the birth of a new child.

Many business groups complain that offering flexibility to their employees will hurt the bottom line, but this is short-sighted. As the data in California and New Jersey show, workplace flexibility makes economic sense, and it allows companies to attract and retain talent. In fact, cities that have implemented paid leave have seen improved worker morale, increased productivity, and small and large business growth.

But businesses can’t act alone. That’s why on June 9, the White House convened a group of fathers, researchers and business leaders—including New York Mets second baseman Daniel Murphy, who missed Opening Day this season to be present for the birth of his son—to discuss the challenges working dads face. The event was a precursor to the White House Working Families Summit on June 23, which is bringing together parents, employers and elected officials to discuss how to make the workplace more fair for working families. While Murphy, who is taking paternity leave, may be the exception to the rule, high-profile fathers like him can help elevate the issue and generate support for smart, sane policies.

There’s no shortage of ideas. Cities and states across the country—Mayor Bill de Blasio’s New York City, in particular—are enacting laws like paid sick leave and universal pre-K. Several bills are in fact circulating at the federal level, including the FAMILY Act, sponsored by Democrats Senator Kirsten Gillibrand (NY) and Representative Rosa DeLauro (CT). The bill would provide partial income for up to twelve weeks of leave for new parents and to care for a sick family member or a worker’s own medical condition. And research from Demos shows that President Obama could help 8 million workers—70 percent of whom are women—by issuing an executive order to raise the minimum wage for employees working for federal contractors. It’s a good start, but it’s still a long way from where we need to go.

While Republicans traffic in the self-righteous language of family values, they have, without a hint of irony, long opposed pro-family policies like paid maternity leave and affordable childcare. And as long as workplace flexibility is seen as a women’s issue, it will continue to be easy for them to obstruct progress. But now, as more fathers—including those, like MLB’s Daniel Murphy, engaged in those most American of pursuits—struggle to balance the competing demands of work and family, the political winds may shift in favor of humane, commonsense workplace flexibility laws for all Americans. That’s how we can really translate “family values” into valuing families.