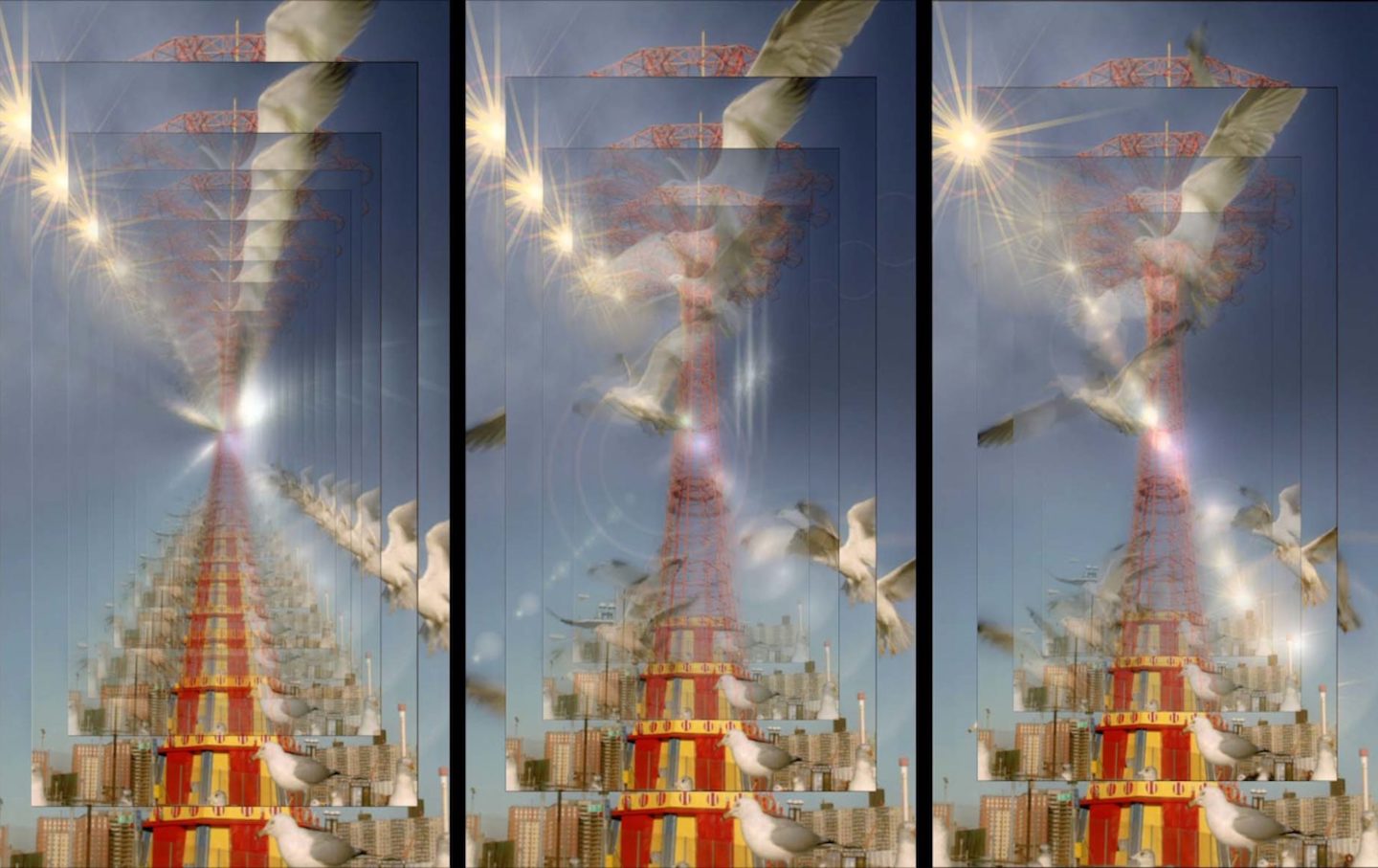 “New Order: Art and Technology in the Twenty-First Century,” a new exhibition at the Museum of Modern Art, takes as its basic theme a nebulous category that is also at the root of many of our fears and obsessions and hopes and dreams and desires. This vague theme—technology—is in vogue right now: From Boston to Chicago to San Francisco to London, museums are putting on thematic shows organized around concepts such as the Internet, technology, social media, artificial intelligence, and networks. That these words have tangled but distinct meanings doesn’t stop many such shows from collapsing them, eliding their distinctions into convenient packages for audiences that might be drawn in by the buzzy subject matter.1

“New Order” is a small show, drawn entirely from pieces in MoMA’s collection, in various media, with an emphasis on sculpture and installations. It is not really an Internet show, one that focuses on digital-born art, Net art, or images. Instead, it focuses on physical aspects of our technology. “Today, when technology can seem utterly smooth and weightless—composed of individual waves, wireless signals, and abstract codes—New Order explores the ways in which technological processes are still stubbornly tied to the physical world,” the introductory wall text reads. This means a heavy emphasis on the raw material of technology: plastics and copper and plexiglass and 3-D-printed polymers. Basically, the stuff that underlies the systems.2

When you walk into “New Order,” the first thing you will likely see is a refrigerator full of bottles. They will probably look familiar: sleek, small plastic bottles filled with unearthly colors of liquid, organized into neat color-coordinated rows. Juice-cleanse bottles. In all lowercase fonts are lists of their ingredients: a yellow-orangish row is labeled “williamsburg, credit card, american apparel, kale chips, kombucha, microbrew, quinoa, agave.” Another row, a sort of urine yellow: “bottle service, wall street journal, windex, champagne, foreign currency, vodka, salmon roe, sea salt.” As you get closer, it’s obvious that unlike their juice-cleanse counterparts, what’s inside these bottles isn’t smooth or uniform. It’s chunky, gross, oddly textured; you can see bits and pieces of the ingredients. You can see what happens when cut-up credit card is mixed with kombucha and agave and left to sit.3 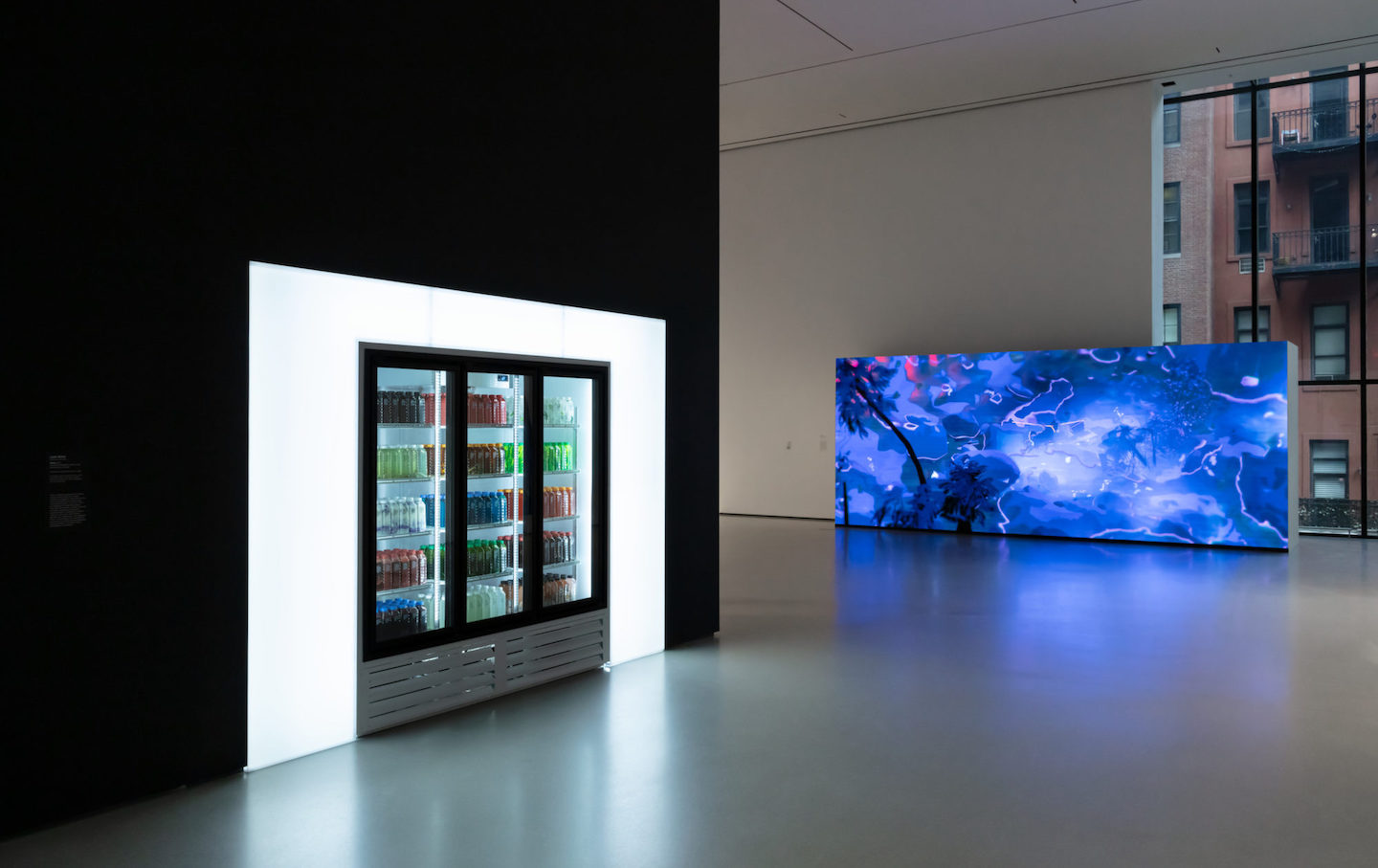 Installation view of “New Order: Art and Technology in the Twenty-First Century” at the Museum of Modern Art, New York.

This weird and wonderful piece is called Skittles (2014) by Josh Kline. In it, he mocks and questions lots of things at once: wellness trends; the strange, sterile systems of food engineering and production; a certain kind of quasi-minimalist, Silicon Valley–sleek marketing and design. But it’s the association of materials and words that’s most fascinating—how he plays with semiotics in a bottle. He literalizes connotations of various buzzwords in ways that are sometimes obvious and sometimes opaque, mixing a drinkable “williamsburg” or “bottle service” or “minimum wage” or “anarchy.” Sometimes his mixology feels free associative, but more often we understand exactly why “wall street journal” belongs in “bottle service,” or why “kombucha” goes into “williamsburg.” It would be worth visiting “New Order” to see Kline’s piece alone.4

But the show swerves wildly and zigzags in all directions. Across the gallery is a piece by Sam Lewitt: a serpentine etching that includes copper, a material found inside most of our electronics that we rarely see. We are supposed to read this piece as a response to the labor, energy, and extraction that go into making our computers and iPhones and cars—but in its abstraction and weird beauty, it doesn’t quite land. It feels only tangentially related to Kline’s piece or, for that matter, much of the rest of the show. 5

The problem with “New Order” is not that the works featured aren’t, by and large, interesting and provocative. The show includes several exceptionally good pieces by talented artists responding to elements of contemporary life and technology—surveillance states, automated labor, the engineering of food systems. The problem is that the show is incoherent. Under its broad umbrella are critical responses to technology, works that make use of newer technologies, and works that attempt to represent technology in more traditional physical forms. In effect, “New Order” presents a hodgepodge of loosely related works. 6

Trevor Paglen, It Began as a Military Experiment (2017). (Courtesy of the artist / Metro Pictures / MoMA)

The show features a compelling 2017 piece by Trevor Paglen, “It Began as a Military Experiment,” for which he selected 10 photographs of military employees whose faces were used in the mid-1990s by the Department of Defense to build one of the original databases of facial recognition technology. On their faces, faint white letters look strangely like crosshairs or tears. Nearby, there’s a video piece by Leslie Thornton of an abandoned ride at Coney Island. Seagulls flock; passersby appear and disappear. It’s beautiful, but what is it doing here? 7

Bizarrely, too: Louise Bourgeois’s holograms. These works are marvelous and strange and surreal and are not shown often enough, but their inclusion in this show is mystifying. They are strange crimson dreamscapes, distorted dollhouse-like scenes rife with quiet violence. But they have more in common with Grimm fairy tales than Paglen’s piece or Kline’s. (“Holography remains one of the most effective forms of virtual reality,” the wall text reads).8

This mishmashing is common to shows that deal with technology, and it’s a problem that can be endemic to thematic shows in general. Last September, critic Brian Droitcour wrote about this in relation to “The Internet Show,” arguing that perhaps we’d be better served by historical shows that deal with the Internet. The same is true, I think, of a show that deals with 21st-century technology; there was an underpinning of history that felt missing, that contributed to the sense of scattershot.9 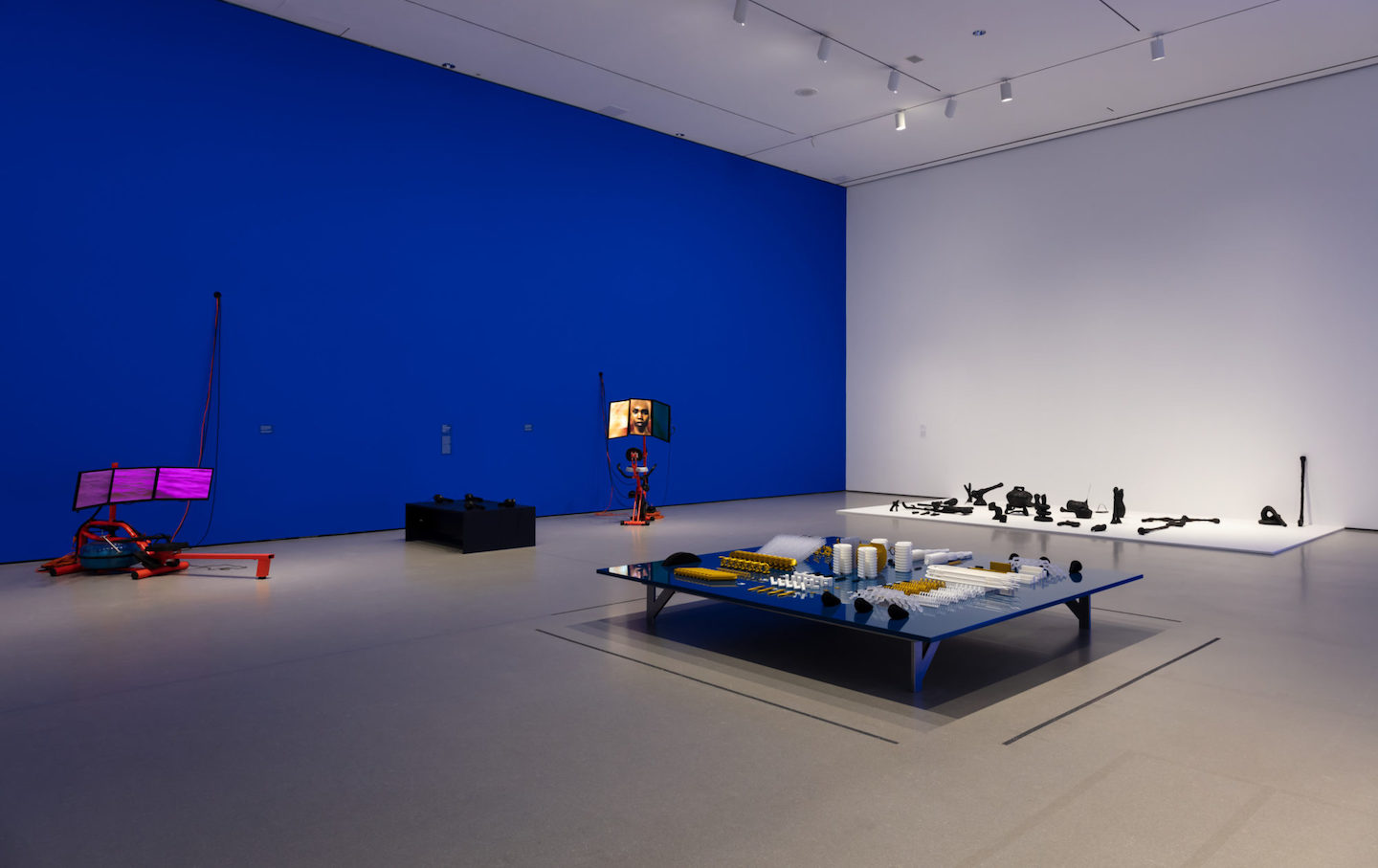 But there’s a flaw, too, in the core conceit of “New Order,” the choice to take a primarily material approach to “art and technology in the 21st century.” The wall text argues, “Technological processes are still stubbornly tied to the physical world.” This gives us a sense of Earth holding back, somehow, or at least anchoring the shadowy forces of technology. “By making plain the material dimensions of modern technology—whether the silicon in the semiconductors and transducers behind all digital media, or the ordinary plastics that we see here 3-D-printed or vacuum-formed, laser-sintered or extruded—these artists make technology strange,” the show argues. But the works in this show that make technology strange are the least compelling; they divorce us from the reality of how intertwined our physical and virtual worlds have become, the way they’re layered on top of each other. You can look at the large-scale installation of Donald Judd–like plexiglass boxes filled with glowing green ultrasound gel and pins and LED strips in the center of one of the rooms and think, “Science fiction.” You can think, “Another planet” or “Elsewhere.”10

At the end of this show, a soft sculpture by Rodney McMillian embodies this point of view. “Succulent” (2010) is a kind of black hole made of vinyl and thread that spans outward. It looks like a bat spreading its wings or like the center of the universe. The wall text reads, “At once apocalyptic and futuristic…it could be the portal to another world.” The implication, perhaps, is that we could step into this dark and dangerous other world. Or we could not; instead, we could walk out of the show, back into the real world, into the rest of the museum full of objects, and read this sculpture as a warning of sorts. But the thing is, we are already in that other world, on the other side.