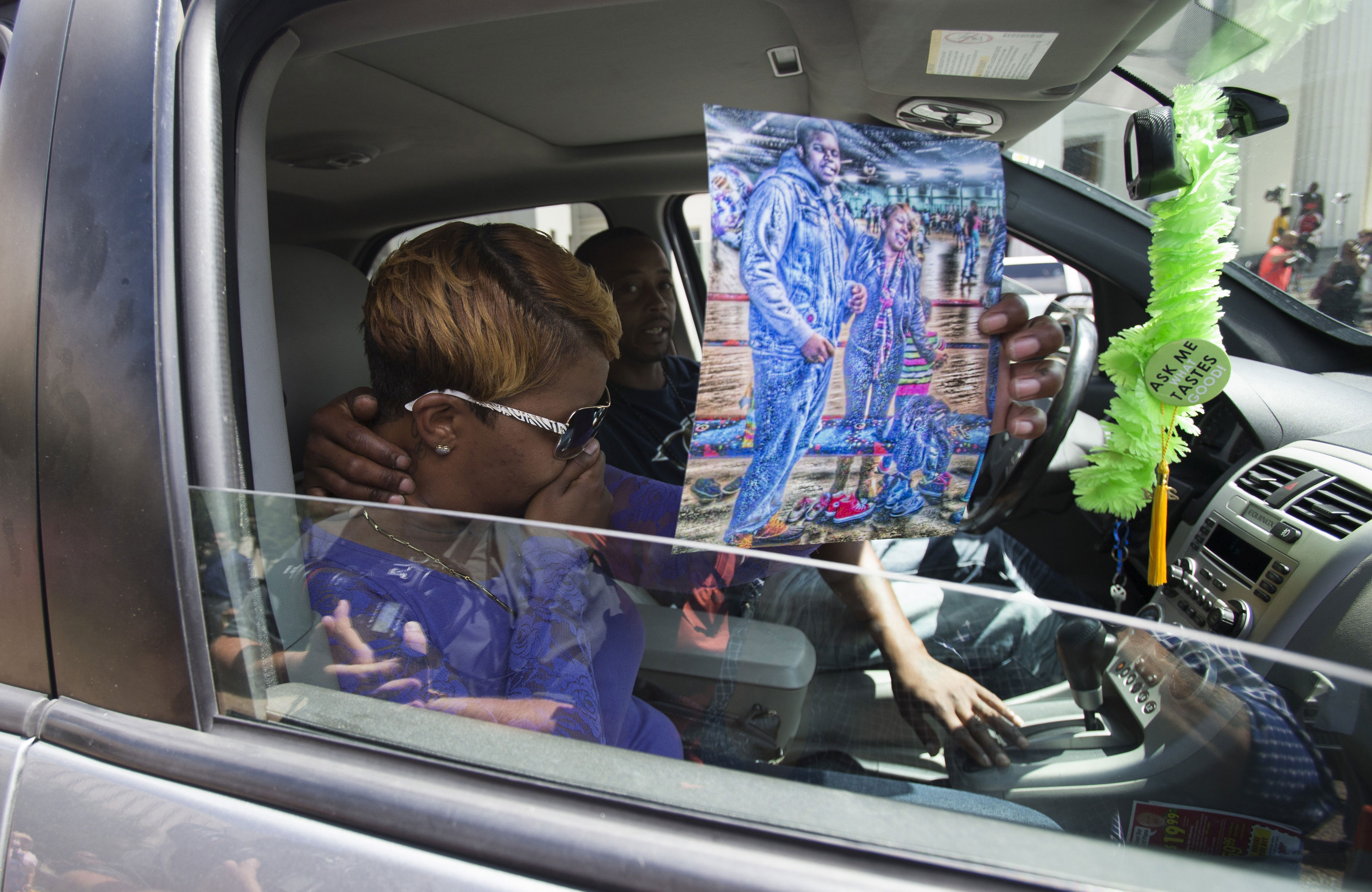 Lesley McSpadden, the mother of Michael Brown, is overcome with emotions as she holds a drawing of her son while leaving a news conference in St. Louis, Missouri, August 12, 2014. (Reuters/Mario Anzuoni)

If you have followed the aftermath of the August 9 killing of 18-year-old Michael Brown, then you have most likely seen the image of his stepfather holding a makeshift cardboard sign that reads, “Ferguson police just executed my unarmed son!!!” You have likely seen the photo of Brown’s mother staring into the camera, her husband encircling her neck with his arm, her eyes swollen to slits after what must have been hours of crying and asking questions that went unanswered.

The grief-stricken face of the parent is everywhere in moments like this, these too frequent moments when a young person loses his or her life to the senseless, ceaseless fear and hatred that black bodies arouse. It seems to matter little what that body is doing at the time it’s mowed down. Approaching a stranger’s porch to ask for help, listening to music with friends, walking home from the corner store—no activity is safe from the knee jerk responses set off by racial hatred or implicit bias. Whatever the preceding action, a human being is dead and his or her parents are left to convince the public and the courts that their offspring had a right to expect another day on earth.

Often such events are covered as a story about race, police violence, white supremacy or laws that protect murderers from prosecution. But the killing of Michael Brown, like the killing of many young black people before him, is rarely framed as a feminist issue or as an issue of pressing importance to those who advocate for choice, self-determination and dignity as they relate to family life. With this most recent killing, I am wondering what it would take for more people in feminist and reproductive rights circles to begin to think of parents such as Lesley McSpadden, Sybrina Fulton and Angela Leisure (a mother whose ordeal I’m especially reminded of in the wake of this latest tragedy) as women they advocate for just as passionately and vigorously as they advocate for a young woman’s right to contraception or an overwhelmed mother of three’s right to an abortion.

This broader perspective has long been that of the reproductive justice movement, whose participants support “the right to have children, not have children, and to parent the children we have in safe and healthy environments.” And some writers, mostly black women, are explaining why the death of Michael Brown terrifies and infuriates them as mothers. Earlier this week, Stacia Brown posted an entry titled “When Parenting Feels Like a Fool’s Errand” on her blog. She writes:

I think about how often I keep you near me and how many people take umbrage with that. She has to learn, they say, how to live in this world.

But how can you learn at 4 to do what still makes me flail and falter at 34? And how can I let you go when a girl a year younger than you was gunned down in our city last week and a boy who would’ve headed off to college for the first time on Monday was executed within steps of his Ferguson, MO home on Saturday?

I’ve no more access to the language for this than you do.

After the first-degree murder charges facing the killer of Jordan Davis were dismissed earlier this year, Black Twitter and the #DangerousBlackKids hashtag provided a space where people could express the gap between how they see the children in their lives and how an unhinged aggressor might see them. Tamura Lomax at The Feminist Wire offered a response to the verdict that asked how such occurrences fit into a broader feminist understanding of justice. She wrote:

I am a black mother and a black wife. I fear for my beloveds’ safety everyday. Ain’t I feminist too? Ain’t the potential murder of my loved ones and how that may impact me and others in my community a feminist concern too?

Earlier in her piece, Lomax wrote: “Our black children, brothers, sisters, aunties, uncles, mothers and fathers are being assassinated. For those who still don’t get that this is, among other things, a feminist issue, you will never get it and are thus a part of the problem…” In the wake of Brown’s death, I’m wondering what it would take to prove Lomax wrong. What would it take for the organizations and commentators who beat the drum for policies related to reproductive health and rights to use their platforms to advocate for black parents who lose their children to violent attacks on those young people’s lives? Gun control advocates reached out to Sybrina Fulton, Trayvon Martin’s mother, to make her an ally and spokesperson on efforts to repeal Stand Your Ground laws. It’s worth looking for similar areas of intersection within feminist circles or, even better, creating new initiatives that put these bereaved parents’ demands front and center.