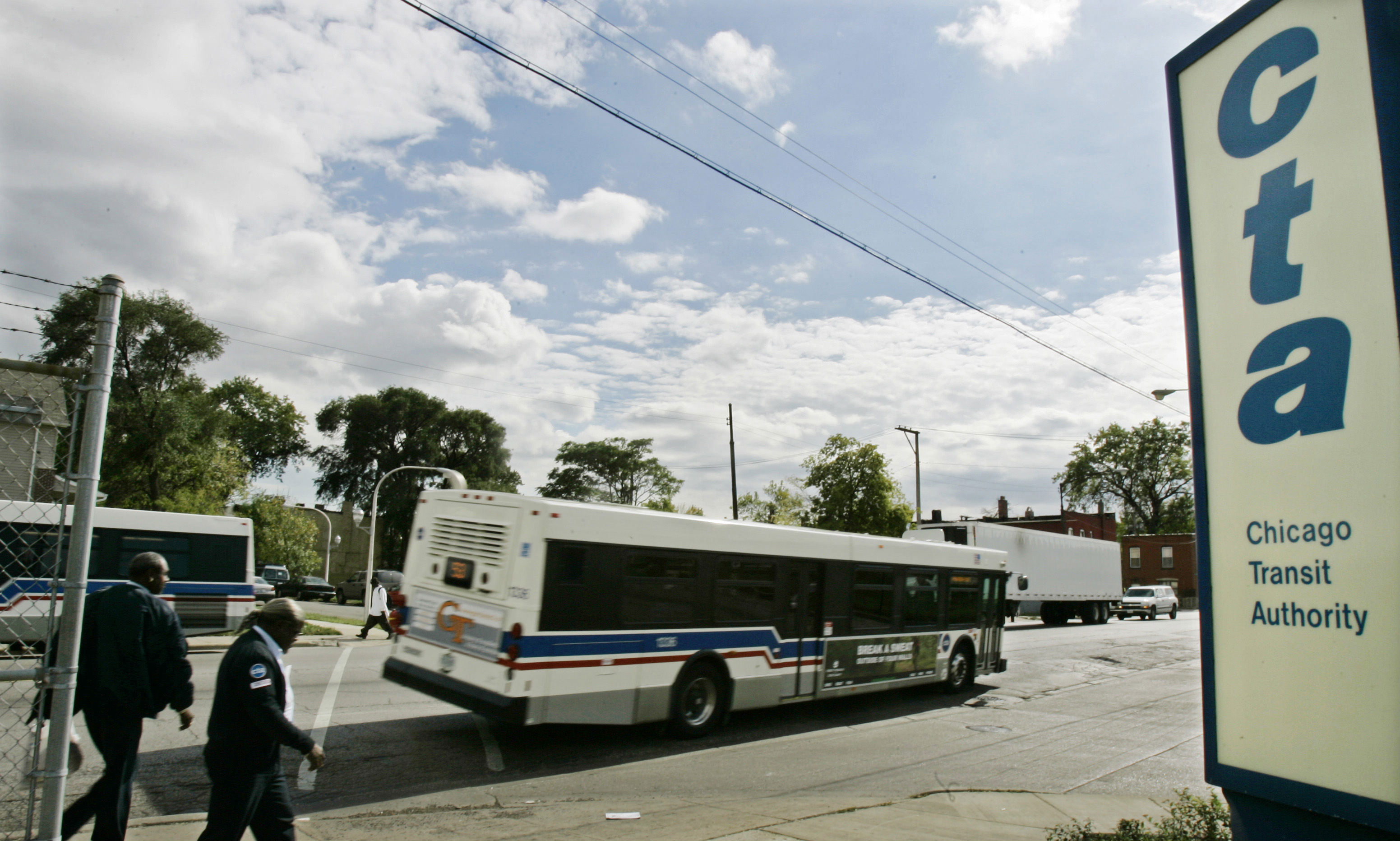 The serial failures of Chicago’s new “smart card” public transportation fare collection system isn’t really a Chicago story—any more than the dark, satanic mills of nineteenth-century England were a Manchester story, or impoverished temp workers risking life and limb packaging iPads is a story about California’s Inland Empire. This is a tale about the world taking shape before us now, everywhere: public provision being turned over to private interests, subverting democracy and all economic good sense in the (terrible) bargain.

RFID fare-collection systems implemented by the San Diego–based defense contractor Cubic have caused public outcry wherever they’ve been introduced, across all four corners of the globe. London is Cubic’s biggest customer, accounting for 33 percent of their transportation business. There, “Oyster” smart cards were introduced in 2003 via what is known in England as a Private Finance Initiative. The parties were a consortium including Cubic and EDS (formerly Electronic Data Systems, a subsidiary of Hewlett-Packard), and London’s transport agency TfL; the seventeen-year contract, signed in 1998, was worth £1.1 billion. The system began with a modest range of features and slowly expanded; but according to Wikipedia, in “August 2008, TfL decided to exercise a break option in the contract to terminate it in 2010, five years early, this followed a number of technical failures.” And yet a subsequent contract with Cubic lasting through 2015 was inked nonetheless.

And the failures went on.

There were 190,0000 complaints about overcharging in 2008 (only 46 percent of complainants had their money refunded)—with the pace accelerating month by month. In 2010, with Londoners still baffled by a confusing system that required them to “tap out” their cards upon leaving a station lest they get hit by the maximum fare, TfL responded by blaming the customers. The next year, the maximum fare was increased; overcharges thus added £61.8 million to the consortium’s coffers. This year, a transportation watchdog group reported that of the Oyster machines “almost no one they interviewed understood how they worked.” The Guardian reported that authorities knew the system was overcharging some users. The paper continued, “Transport for London (TfL) has been made aware of the glitch but is not going to fix it until September at the earliest—because it only updates the Oyster system three times a year.” One of the most embarrassing problems in Chicago—machines charging the wrong customer card—is rampant in London, according to a report in the excellent local Chicago news site Gapers Block. Another system glitch reported by Gapers Block was that vendors were able to receive money from customers, then void the transaction and still keep the cash. Meanwhile customers are owed some £53 million in unclaimed refunds; but there is “no easy way to reclaim the funds.”

The system is up for rebid in 2015. Trouble for Cubic stockholders, right? Not so much. Observed a Credit Suisse equity report, “it is a longstanding relationship that is likely to be renewed.” Nice work if you can get it.

You could enjoy a nice around-the-world tour just traveling to cities where Cubic has screwed up fare collection. Gapers Block documented them: double-charging in Atlanta. Twenty-fold charging in Brisbane, Australia. Miami-Dade’s “Easy Card” system was dubbed “Easy Fraud”: this fall, “a 22-year-old man has stood trial over a a glitch allowing him (and members of a WSVN Channel 7 News team) to load money onto Easy Cards for free.” In San Francisco, “Cubic disclosed it received 38,000 customer service phone calls in August 2011.”

And then Los Angeles: in spite of “nearly consistent one-star reviews on Yelp, Cubic still got a six-year, $545 million contract extension.”

None of this bothered the city fathers of Vancouver, British Columbia, apparently. Their Cubic-built system “Compass” comes fully online this January. A large-scale Beta test, though, has already enraged citizens who realized that buying a fare through the traditional system, which will continue on buses, forced you to pay twice when transferring to trains, which only accept the new cards.

And so Cubic continues to thrive and grow, much to Wall Street’s delight. Wrote security analysts of Cubic’s military subsidiary, “2013 is likely to be a year of flattish revenue and lower earnings owing to tight defense budgets.” But “[t]here is no pure-play publicly traded fare-collection competitors,” so “[w]e see a solid growth story/existing backlog in Transportation,and believe that CUB’s efforts to expand its addressable market…. Scope for smart card penetration in existing U.S. transit systems is another growth lever.”

Let’s pause and reflect on what’s going on here.

“Privatization” isn’t new in Chicago’s fare-collection system; indeed the two components of the system being replaced, semi-smart preloaded “Chicago Cards” and dumb old magnetic-strip cards, were also devised under contract to Cubic. What we now see in Chicago, however, is an intensification of the logic of privatization. A publicly traded company succeeds—attracts more investors—only if it grows. The equity reports from the investment banks are telling in their ruthless focus on this fact: “flattish” grown is veritable death. It is not enough to “saturate” an old market. It is instead crucial to devise new ones—even if the old products don’t need fixing.

That is one of the reasons turning over public municipal services to private interests is so dangerous: the exploitative logic of planned obsolescence. The watchword: If it’s not broke—fix it! Or, as we’ve seen, don’t fix it. Just change it, even if what replaces it is worse.

What does it mean when a new product that fails and fails and fails, frustrating customers everywhere, continues to enjoy sales growth? It means that the customer isn’t actually the customer. The politicians are the customers. And they’re plainly getting something out of the deal whether Joe Public gets double-charged for a ride downtown on the No. 6 route or not. Consider: one of Cubic’s biggest institutional owners is Blackrock, the biggest investment fund in the world; and Blackrock’s CEO gave $25,000 to Rahm Emanuel’s mayoral campaign, then enjoyed a rare half-hour sit-down with him. Was transit fares one of the things they talked about? Wouldn’t it be nice to know.

Another danger is that private companies see the Internal Revenue System as a machine to repurpose our cash into their pockets. Reported Cubic to investors after the 2012 transportation bill was signed into law, “of significance to Cubic Transportation Systems in that all of our transit agency customers in the United States currently receive federal funding, and this bill will continue to provide them with the funding that they need to start new projects themselves as well as any prospective clients who may have needed funding.” Tellingly, you see no talk here of efficiency, or cost-savings, or market-enforced accountability, all those boons privatization is supposed to deliver to citizens. It’s just—here’s a new revenue stream. It’s just—time to call up “prospective clients.”

There is no market-enforced accountability here. How could there be, when the contracts last ten years and are all-but-automatically renewed, due to (telling language!) “longstanding relationship[s]”? How could there be “competition” when the assets in question are natural monopolies? (What’s a competitor supposed to do, build their own subway routes?) And yet, maddeningly, the fallacy of the “efficient” private sector endures—helped along by those who ought to know better. Like when President Obama promised to bring healthcare.gov up to the standard of “private sector velocity and effectiveness.”

Somehow, failures in the public sector are always judged as systematic. The private sector thus exists to ride to the rescue—and their failures are only judged anomalies. A pretty nice arrangement for investors. The only people who suffer are the citizens. As Credit Suisse reports, “90%+ off Cubic’s cash on the balance sheet is held offshore.”

So that’s how it works: we shovel them boatloads of money. They stick us with substandard products. We fuss and holler, to no avail. Then they shelter the money they’ve just Hoovered from our pockets in offshore accounts. Maybe it’s time for activists in Chicago, Vancouver, Atlanta, Miami, Brisbane and London to get together, raise their collective voices and demand some of that money back.